Leading by example: Hard-working O’Reilly has enjoyed captaining the Blues
0 comments
Share this
{{featured_button_text}}
1 of 3 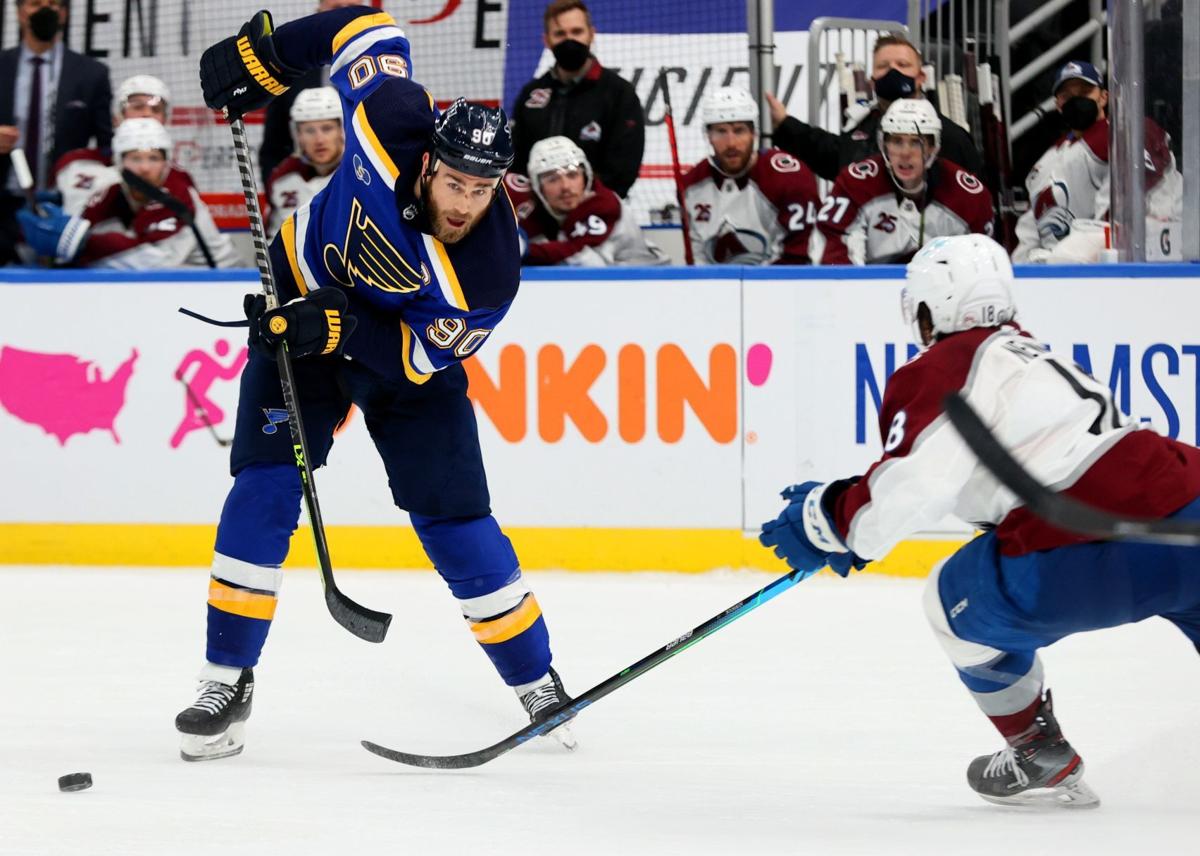 Blues center Ryan O'Reilly pass the puck by Avalanche center Alex Newhook on Friday, May 21, 2021, in the third period of Game 3 of Round 1 of the Stanley Cup playoffs at Enterprise Center in St. Louis. (Christian Gooden, cgooden@post-dispatch.com) 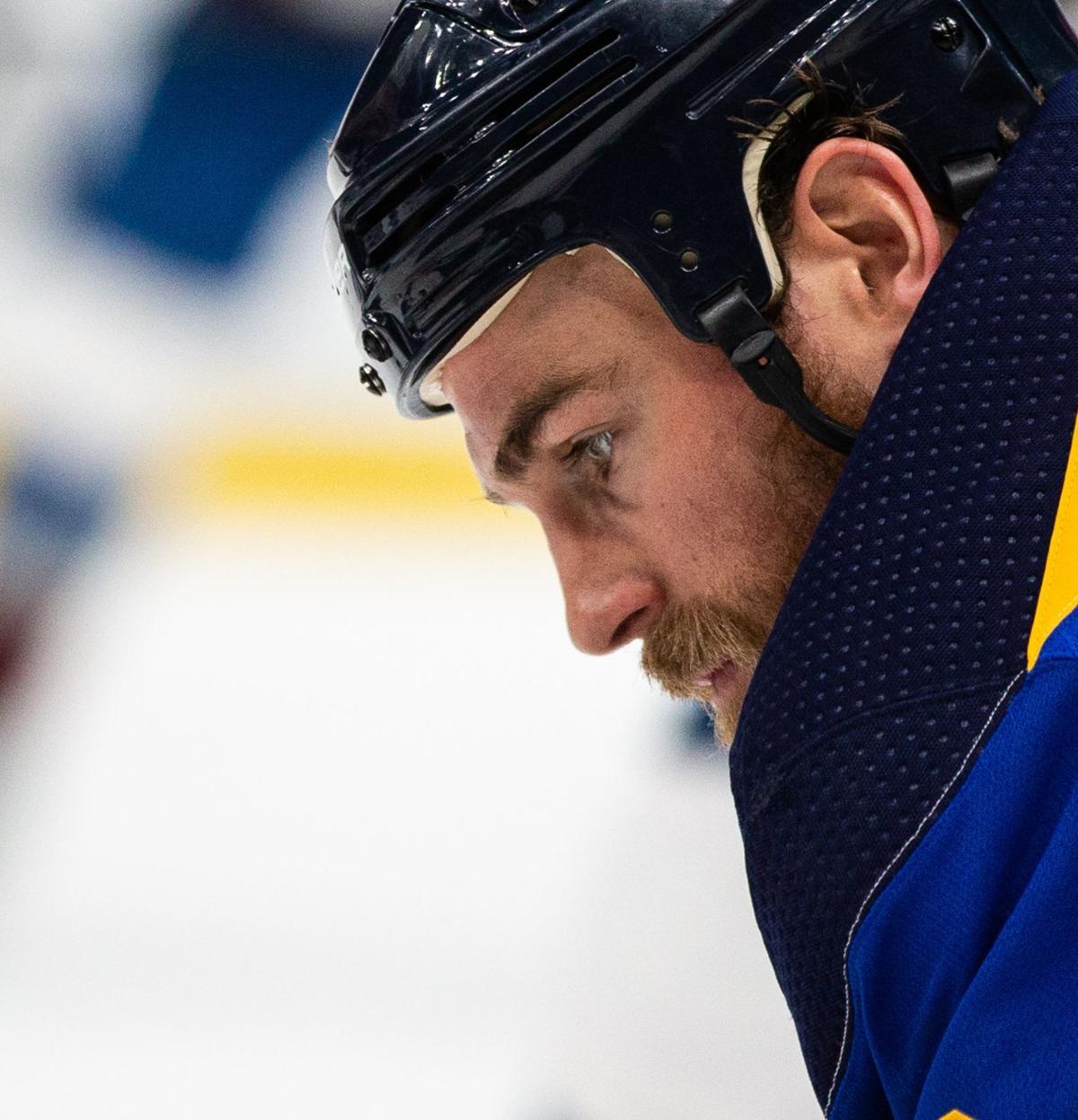 Blues captain Ryan O'Reilly focuses on the puck during a faceoff this season, a year in which he won 58.9% of the ones he took — the second-best success rate of his career and fifth-best in the NHL.

The Blues' Ryan O'Reilly, working against Colorado's Alex Newhook in the playoffs, "did a great job" in his first season as the team's captain, coach Craig Berube says.

The freshest memory of Ryan O’Reilly and the Blues’ 2020-21 season isn’t a pleasant one. Playing without linemate David Perron against Colorado, O’Reilly was overwhelmed along with his line and the rest of the team in a four-game-sweep by the Avalanche.

But the lasting snapshot of the year should be the one that took place April 24, against the same Avalanche. Floundering at 19-19-6 and out of playoff position in the West Division, the Blues fell behind 2-0 early.

Enough was enough for O’Reilly. He stole the puck from Nathan MacKinnon behind the Colorado net, passed the puck to himself between the legs of Avs defenseman Cale Makar then sent a pass in front of the net toward teammate Jordan Kyrou.

Before the puck reached Kyrou, it deflected off another Colorado defender, Devon Toews, and into the net for a St. Louis goal

Relive the magic: 2 year ago, the Blues took the Cup

It was the first of three O’Reilly goals that night in a 5-3 victory that propelled the Blues to an 8-1-3 finish and a playoff berth. You could make the case that the Blues don’t make the postseason without that O’Reilly play — a play that perfectly illustrated what coach Craig Berube wants in a team captain.

“First and foremost, what I look for in a captain is just lead by example on the ice,” Berube said after the season.

Doing so, Berube continued, “is the No. 1 most important thing, and it’s hard to find the guy that works harder and competes harder than Ryan O’Reilly.”

Even factoring in all the injuries and COVID 19-related issues, the Blues underachieved in their recently completed season. And when that happens in hockey, all eyes usually are on the captain.

When the Blues lagged near the bottom of the NHL standings over the first half of their 2018-19 Stanley Cup championship season, a consistent topic for fans and some media members was whether captain Alex Pietrangelo was the right man for the job.

So it goes with the territory. But in the case of O’Reilly, Berube and general manager Doug Armstrong have no issues with how O’Reilly handled his first year wearing the “C.”

“I thought he did a great job,” Berube said. “I thought he got better as he went along the year, and did a tremendous job down the stretch and in the playoffs in my opinion.

“I know that we got beat four straight, but from a captain standpoint, he worked and he led by example on the ice. I thought that he did a great job in the locker room and on the bench of becoming more vocal and preaching the right things and all the stuff that captains do.”

In terms of leading by example, it’s hard to argue with anything O’Reilly did during the regular season. He led the team in goals (24) and game-winning goals (four). Over a normal 82-game regular season, O’Reilly was on pace for 35 goals. That would have been a career high.

His plus-minus differential of plus-26 was a career high and tied for fifth-best among all NHL forwards this season. He won 58.9% of his faceoffs, the second-best success rate of his career and fifth-best in the NHL this season.

And he was always there: O’Reilly and alternate captain Brayden Schenn were the only Blues to play in all 60 regular-season and postseason games.

When asked if the captainship was what he expected or more than he expected, O’Reilly replied:

“Honestly, I think it’s both. I had some expectations, and also still a lot of learning that needs to be done. It’s a tough job but it’s a fun job, too. I like having those responsibilities.

The restrictions on what teams and players could do away from the rink because of NHL COVID protocols made it tougher for O’Reilly as captain.

“I wasn’t allowed to get the leadership group together to take them out for dinner, to do the things that I’ve done in the past with that group,” Armstrong said. “Craig and I, or any coach and I, would take those guys out maybe once every month, once every couple of months.”

But not this year.

“Everything was just, it was awkward,” Armstrong said.

Even given those restrictions, Armstrong liked what he saw from his captain.

“I’m excited for his leadership style and leadership skills,” he said. “I know he takes a lot of pride in it. I know he’s gonna work very hard this summer to make sure that we come back as a 100% committed team.

“It wasn’t the easiest task, coming in under this environment, and I thought he did a good job.”

One thing O’Reilly doesn’t regret as the Blues head deeper into their offseason is saying the Blues would beat the Avalanche in the first-round playoff series. Zero regrets, even if Colorado captain Gabriel Landeskog said after the series that it fired up the Avalanche.

“I think I had the belief there,” O’Reilly said. “I thought we could. We didn’t, which is disappointing. I don’t think it was a crazy comment. I believed in this group. And I don’t think we got a lot of bounces and it was tough, and it just started steamrolling and such.

“I believed. I stepped on that ice and I was there to beat them. It just wasn’t good enough. It didn’t happen. But I will never question my belief in trying to win. Ever.”

Rangers get Sammy Blais and a second-round pick in 2022 draft from the Blues in the deal.

Armstrong: Tarasenko could still be a Blue this season

Despite Tarasenko's trade request, Armstrong said he will do what's best for the organization.

After four seasons with the Blues, the 24-year-old defenseman went to Seattle in Wednesday's expansion draft.

Blues move up for Swedish forward in Round 3 of draft

Trade with San Jose, leaves them with only three picks on Saturday.

Starting with expansion draft, things about to get busy for Blues

He won't go as high as his big brother, who was a first-round pick, but he's the top local candidate to be chosen in the NHL draft.

Here's what was talked about just before the expansion draft.

Without much organizational depth, Blues need to hit on as many draft picks as possible.

Blues center Ryan O'Reilly pass the puck by Avalanche center Alex Newhook on Friday, May 21, 2021, in the third period of Game 3 of Round 1 of the Stanley Cup playoffs at Enterprise Center in St. Louis. (Christian Gooden, cgooden@post-dispatch.com)

Blues captain Ryan O'Reilly focuses on the puck during a faceoff this season, a year in which he won 58.9% of the ones he took — the second-best success rate of his career and fifth-best in the NHL.

The Blues' Ryan O'Reilly, working against Colorado's Alex Newhook in the playoffs, "did a great job" in his first season as the team's captain, coach Craig Berube says.