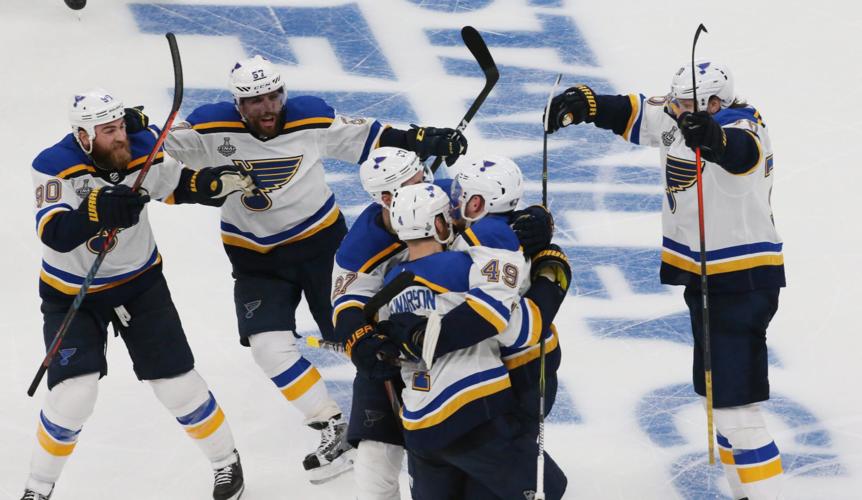 Blues teammates mob Carl Gunnarsson after he scored the overtime goal that won Game 2 of the Stanley Cup Final in Boston. (Photo by J.B. Forbes, jforbes@post-dispatch.com) 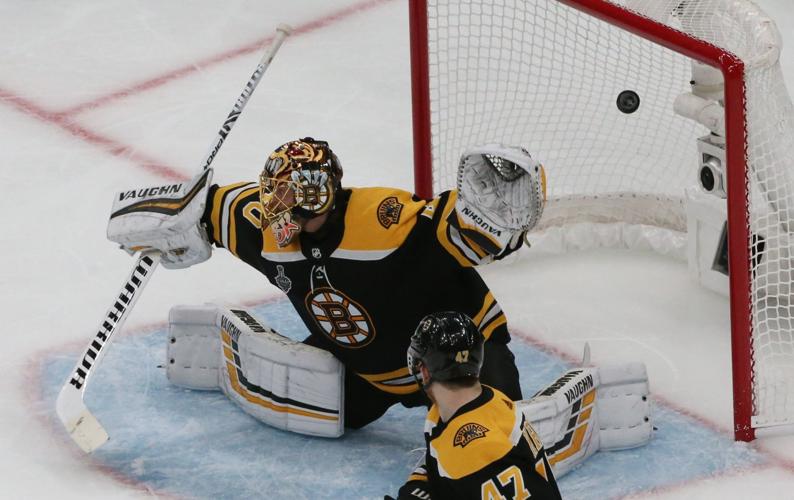 The puck shot by the Blues' Carl Gunnarsson gets past Bruins goalie Tuukka Rask in overtime Wednesday of Game 2 of the Stanley Cup Final.

The Blues’ first trip to the Stanley Cup Final in 49 years has been a big hit in television ratings. But they don’t rival what other St. Louis pro teams — the Cardinals and once-loved Rams — have done on the big stage.

Game 1 of the Final was shown on NBC (KSDK, Channel 5 locally) and was seen in 29 percent of homes in the market with a TV, making it the most-watched NHL game on record in St. Louis. That’s according to Nielsen, which tracks viewership. (Ratings were not measured on a daily basis for the Blues’ other Final appearances, in 1968, ‘69 and ‘70.)

The rating for Game 2, on Wednesday, dipped to 22.0. A drop was expected because the telecast was on cable’s NBCSN, which is seen in fewer homes than Channel 5, and didn’t carry the novelty of being the Blues’ first Final appearance in nearly half a century.

Their two Super Bowl appearances during their St. Louis era averaged a 54 rating.

St. Louisan Joe Buck is Fox Sports’ lead NFL, MLB and golf play-by-play broadcaster, so he doesn’t have many chances to be a fan. The exception — he wildly roots for the Blues.

“I’m proud of where I’m from, and it’s the one place I can show that and wear it on my sleeve,” he has said. “Nothing better than high-fiving strangers after a Blues goal.”

Buck, 50, is a longtime Blues season-ticket holder and is caught up in the team finally making it to the Final. The last time the Blues were in the title round, 1970, he was an infant. But he won’t be able to attend the team’s first home game in the Final since then, on Saturday night, because he’ll be in Charleston, S.C., broadcasting the U.S. Women’s Open golf tournament.

It’s just part of the job, he says.

“I’m anxious to do the golf, what with the (men’s) U.S. Open coming up in a couple weeks. It’s good for us on the crew to all get back in our saddles so to speak and remember how to do it. It’s an important weekend for us.”

Fox’s golf coverage Saturday is set to end a little more than an hour before the Blues-Bruins game is set to start, at about 7:20 p.m.

“TVs work in Charleston, too,” he said.

Buck originally planned to give his tickets for Saturday’s game to Fox Sports colleague Howie Long and his son Chris, the former Rams defensive end who recently retired from pro football and is the reigning Walter Payton man of the year award winner in the NFL for his charitable endeavors. But the Longs since have secured seats in a suite, so Buck’s tickets will go to his daughter Natalie and her boyfriend.

“The story has a happy ending,” Buck said. “Had the Longs taken my seats, Natalie was dying to go so I was going to be on StubHub for about $1,300 apiece.”

But he’s set to be on hand Monday for Game 4. That will be part of a long Blues-related day for Buck, who starts it by hosting his annual golf tournament that benefits Children’s Hospital. In a twist, the Blues are being honored at this year’s event at Old Warson Country Club.

“Of all the years to have them as the co-title sponsor,” Buck said. “I’ll get to play that day with (Brett) Hull, (broadcaster Darren) Pang, (Bernie) Federko. Other guys are coming out and (coach Craig) Berube is sending a foursome. We moved the tee time up from noon to 10:30 so we can get our business done, raise money and send people downtown.”

This season’s Blues are sliding to a level St. Louis hasn't seen in quite some time

In riding a roller coaster of hot streaks and cold spells, of porous defense and poor injury luck, the Blues have landed in the bottom quarter…

Blues at the break: The rough times may only be beginning for this underachieving club

With the trade deadline looming, the Blues are in danger of missing the playoffs for only the 10th time in club history.

Blues teammates mob Carl Gunnarsson after he scored the overtime goal that won Game 2 of the Stanley Cup Final in Boston. (Photo by J.B. Forbes, jforbes@post-dispatch.com)

The puck shot by the Blues' Carl Gunnarsson gets past Bruins goalie Tuukka Rask in overtime Wednesday of Game 2 of the Stanley Cup Final.