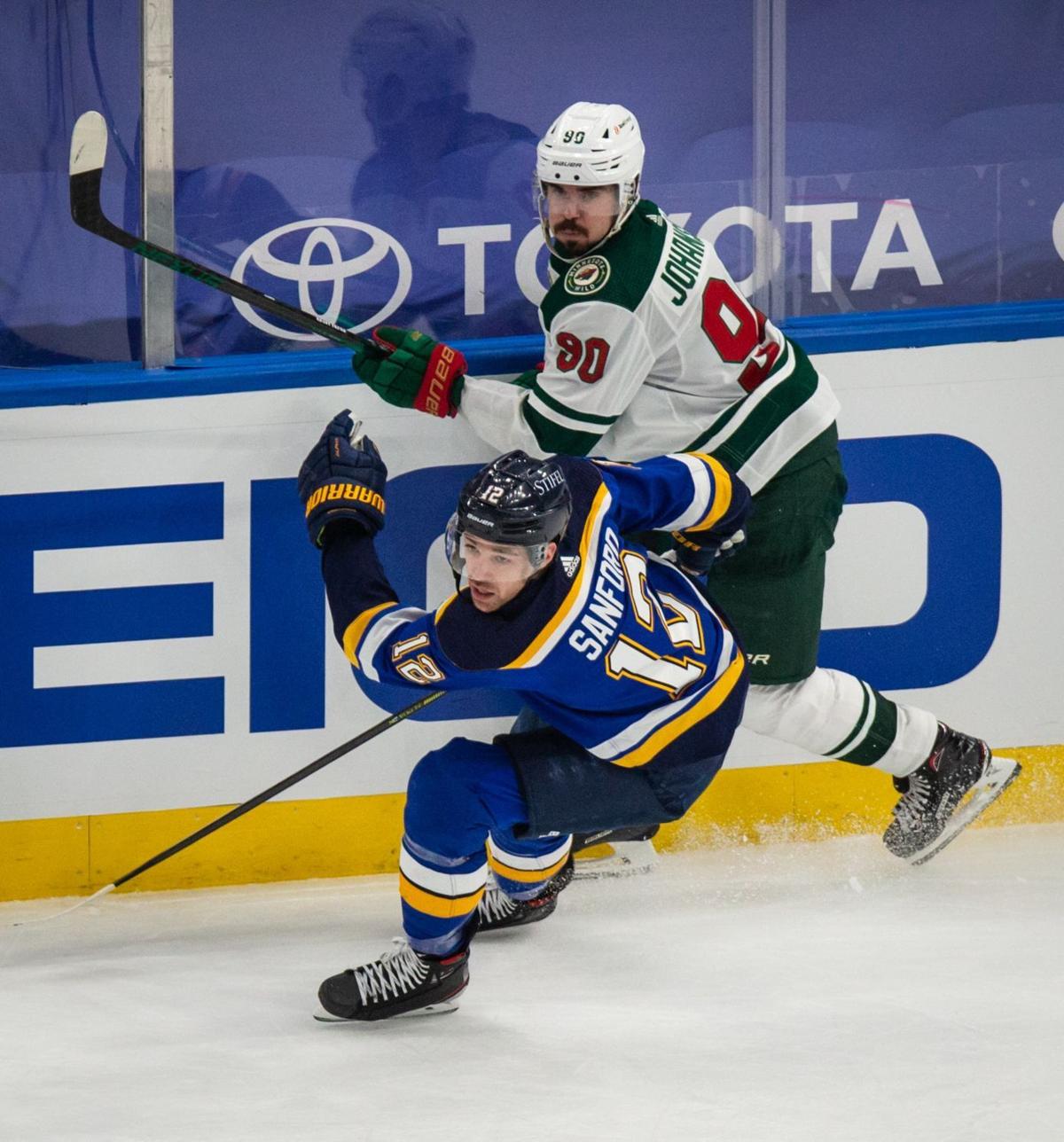 Blues left winger Zach Sanford (12) chases after the puck after a collision with Minnesota Wild center Marcus Johansson in the third period of a game at Enterprise Center in St. Louis on Friday, April 9, 2021. The Blues won 9-1. (Sara Diggins, sdiggins@post-dispatch.com)

ST. PAUL, Minn. — For the third time this season the Blues found themselves in an opposing team’s city ready to play hockey, only to have the game postponed. And each time for a different reason.

The latest case came Monday when the Blues learned in the middle of the afternoon, about 4½ hours before the planned puck drop, that their scheduled game against the Minnesota Wild was being postponed.

The Blues already had conducted their morning skate at Xcel Energy Center. The trade deadline came and went, and then the game was postponed — and rescheduled for May 12, with a 7 p.m. start.

The decision was made, according to the NHL, “out of respect for the community following the tragic shooting that occurred in Brooklyn Center, Minn. Sunday afternoon.”

Daunte Wright, a 20-year-old Black man, was fatally shot then after being pulled over for a traffic violation. Brooklyn Center police chief Tim Gannon said the shooting was an “accidental discharge,” with the arresting officer intending to use a Taser.

Meanwhile, the murder and manslaughter trial of former Minneapolis police officer Derek Chauvin in the May 2020 death of George Floyd is ongoing. So it is a tense time in the Twin Cities.

“There’s things much more important than sport right now in society,” Blues general manager Armstrong said. “We’ll follow the direction of the NHL and most importantly what’s best for the Minnesota Wild today.”

Armstrong made those comments about a half hour before the game was postponed, on a Zoom call to discuss the NHL trade deadline.

The Minnesota Wild said later in a statement that the postponement decision “was made in the best interests of our fans, employees, players and community after discussions with local and state officials and the National Hockey League. . . .The Minnesota Wild organization extends its deepest condolences to the family and friends of Daunte Wright.”

Monday’s contest was supposed to be the makeup for a Feb. 9 contest between the teams that was postponed because of COVID-19 issues. So that makes the May 12 contest the makeup of a makeup game. It’s been that kind of a season for the Blues, and most of the rest of the NHL for that matter.

So far, the Blues have had to shuffle games involving all seven West Division opponents mainly, but not exclusively, because of COVID-related reasons. Under the original schedule, the Blues were to have played 43 games by now. Only 33 of those contests were played on the day originally scheduled.

But because of further juggling, the Blues (19-16-6) have managed to play 41 contests so far in their 56-game schedule.

As mentioned, Monday’s postponement marked the third time a Blues road game has been postponed within hours of a scheduled start.

On Jan. 28 in Las Vegas, the Blues were about to take the ice at T-Mobile Arena for a morning skate in advance of that night’s game against the Golden Knights when the postponement was announced because of COVID issues involving members of the Vegas coaching staff and Vegas defenseman (and former Blues captain) Alex Pietrangelo. The Blues went ahead and practiced, and then left town that afternoon for their next stop on that trip — Anaheim.

On March 15, a scheduled Blues game at Staples Center against the Los Angeles Kings was postponed because the Kings were stuck in Denver in a blizzard after playing the previous day against the Colorado Avalanche. The Blues ended up practicing that day and stayed in LA because they had a game there two days later against the Kings.

The postponed LA game was rescheduled for May 10. The Blues’ regular season originally was scheduled to end with a back-to-back May 7-8 in Vegas. Now, it has been extended four additional days because of the rescheduled Kings and Wild contests.

Blues left winger Zach Sanford (12) chases after the puck after a collision with Minnesota Wild center Marcus Johansson in the third period of a game at Enterprise Center in St. Louis on Friday, April 9, 2021. The Blues won 9-1. (Sara Diggins, sdiggins@post-dispatch.com)