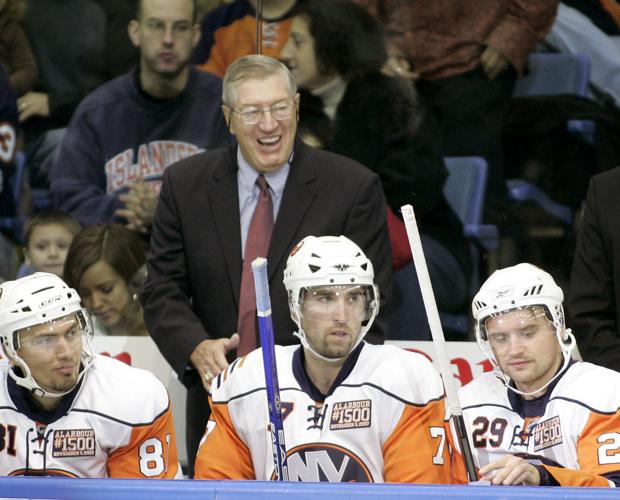 New York Islanders head coach Al Arbour smiles as he stands behind the bench in November 2007 during his 1,500th game as an NHL coach. (AP Photo) 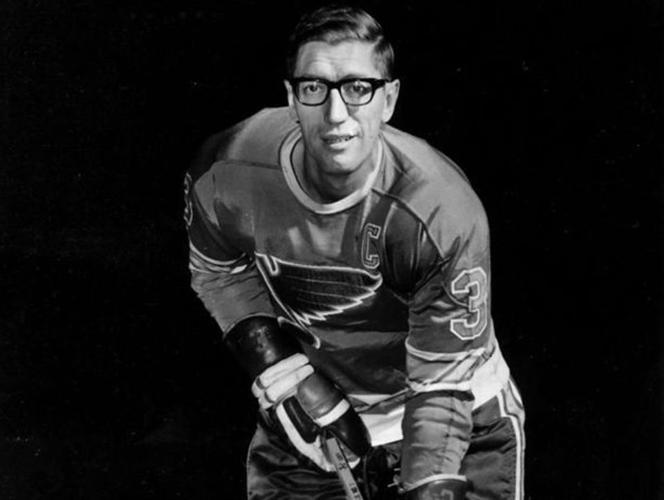 Al Arbour, the first captain of the St. Louis Blues and the last player in the NHL to wear glasses, has died after battling Parkinson's disease and dementia. He was 82.

"Our heartfelt condolences go out to the Arbours after the passing of our original captain," the Blues posted on their Twitter account.

Arbour played 14 seasons in the NHL, starting in Detroit in 1953. He had played just 14 games over the preceding four seasons when he joined the Blues for their inaugural season in 1967. He was the team's fifth choice in the expansion draft.

"I drafted him not only as an outstanding defenseman but also as a team captain," former Blues general manager and head coach Lynn Patrick once said. "I told Scotty (Bowman) when I picked him that Al was going to be our captain. He was that kind of guy."

Arbour was 35 years old when he joined the Blues and a veteran of 395 NHL games. He had already won three Stanley Cups as a player — with Detroit, Chicago and Toronto — making him one of 10 players in league history to accomplish that feat.

"I really wanted to quit, but Lynn kept after me," Arbour once said. "He kept telling me just to come to St. Louis and look things over. So two weeks after the season started, I came. It was the best thing that ever happened to me."

Arbour played 231 games with the Blues and was twice named to the West Division's starting lineup for the NHL All-Star Game.

Bowman said that Arbour, who wore No. 3, "had the ability to dig deeper when he had to, to make himself go harder when he was hurting or when the team needed him. That's toughness."

"He was never out of position," former teammate Bob Plager once said. "I like to think that's one thing I learned from him. You have to play your position. He was such an inspiration to everyone on the team. How could you not go out there and give it everything you had when you looked over at this guy who seemed to have to struggle just to skate, wearing glasses (and) going down to block shots?"

Arbour, the last player in the NHL to wear glasses, claimed he never had them broken.

"I never got one square in the eye," he said. "Once when I was wearing steel rims, I got hit and the puck drove a piece of the frame into my eye. That's when I started looking around for plastic that wouldn't break."

At that point, after three seasons with the Blues, Arbour was ready to retire. Bowman, who was coaching the Blues at the time, wanted Arbour to coach so that he could focus on his general manager duties.

The first of Arbour's two coaching stints with the Blues came at the start of the 1970-71 season. But after 50 games, the Salomons, who owned the club, wanted Bowman back behind the bench — and honestly, the team missed Arbour on the blueline.

Bowman returned to coaching and Arbour played 28 more games, but he officially ended his playing career after the season.

Bowman was adamant that Arbour get the coaching job again, but the Salomons felt that Arbour didn't have good leadership traits and instead turned to Sid Abel. He coached 10 games before being replaced by Bill McCreary, who lasted 34 games. They went a combined 9-20-5 before Arbour was brought back.

"When I took over again, the team wasn't as close as the Blues club I played for," Arbour once said. "The important thing was to stress upon them that if they were going to do anything, they had to do it together."

Behind Arbour, the Blues came together and qualified for the second round of the playoffs in the 1971-72 season, but were swept by Boston. When Arbour and the team opened the following season with a 2-6-5 start, he was let go again.

It worked out OK, though. He landed with the New York Islanders and won four straight Stanley Cups from 1980 to 1983.

In 19 seasons with the Isles, Arbour led the club to a total of 15 playoff appearances and won 119 career playoff games. The team's streak of 19 straight playoff series victories still stands as the longest such streak in pro sports.

"Al will always be remembered as one of, if not, the greatest coaches ever to stand behind a bench in the history of the National Hockey League," current Islanders GM Garth Snow said in a statement Friday.

Arbour, who was elected to the Hockey Hall of Fame in 1996, still ranks second in NHL history in games won as a coach behind Bowman.

The fact that both Arbour and Bowman, who has been part of 14 Stanley Cups in some capacity since leaving St. Louis, both were let go by the Blues was never forgotten.

"I remember when they had a ceremony for Al in New York," Claire Arbour, Al's wife, said a few years ago. "(Bowman) was there and (former Blues broadcaster) Dan Kelly came over to emcee it. I still remember Dan Kelly saying, 'I come from St. Louis, where we had Scotty Bowman and Al Arbour, and we fired them both. How smart are we?' That line really rang true."

Arbour had been in failing health for a while. Dan O'Neill chronicled his battle in this March 28 article.

Al Arbour has another kind of fight now

Original Blues captain who became Hall of Fame coach with Islanders is in poor health at age 82.

New York Islanders head coach Al Arbour smiles as he stands behind the bench in November 2007 during his 1,500th game as an NHL coach. (AP Photo)