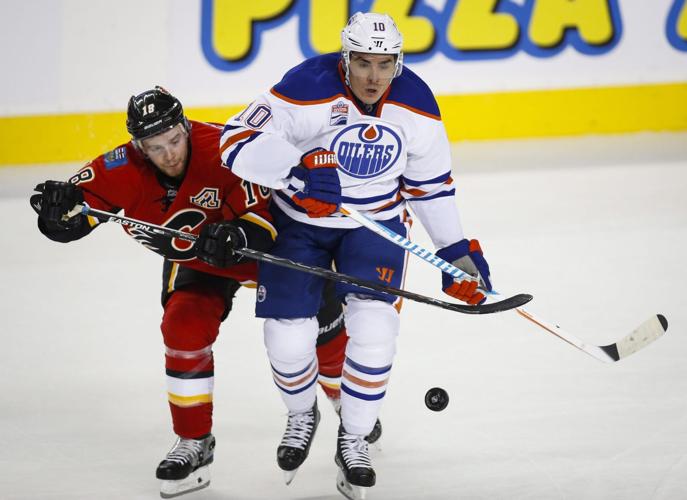 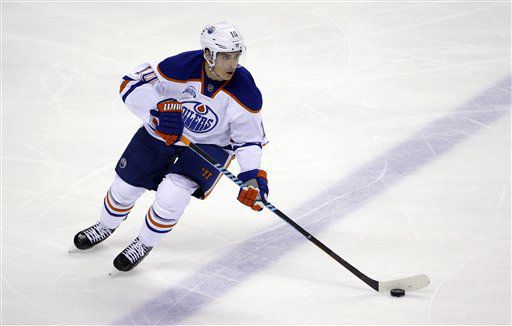 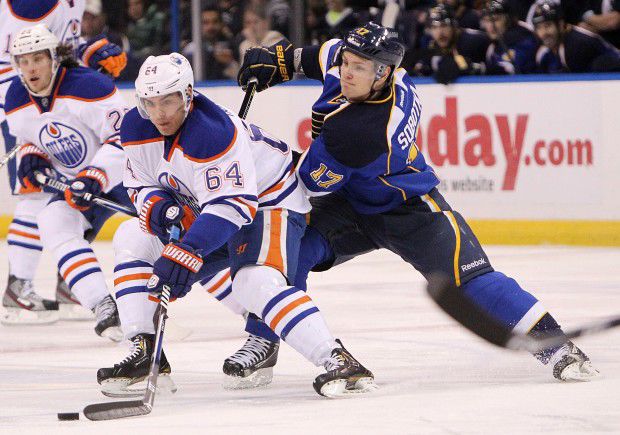 Blues left wing Vladimir Sobotka (right) gets whistled for tripping on this third period play during a game between the St. Louis Blues and the Edmonton Oilers on Tuesday, March 26, 2013, at the Scottrade Center in St. Louis. Edmonton right wing Nail Yakupov (left) was simultaneously flagged for unsportsmanlike conduct. Photo by Chris Lee, clee@post-dispatch.com

With a forward corps that took a hit before the season even began when Vladimir Sobotka couldn’t get out of his Russian contract and Jaden Schwartz got hurt, the Blues moved Friday to shore up that spot — and spend some of the money that was sitting unused under the salary cap.

Edmonton winger Nail Yakupov was on the trade market, and after reports indicated that he was probably headed to Chicago, the Blues swooped in and got him.

The price for the Blues was cheap: left winger Zach Pochiro, the team’s fourth-round selection in 2013, and a conditional third-round draft pick in 2017. If Yakupov scores 15 or more goals, the pick becomes a second rounder in 2018.

Yakupov, the No. 1 pick in the entire draft in 2012, hadn’t lived up to expectations in Edmonton and asked for a trade. The Blues were happy to oblige and had an advantage over other teams such as Chicago. With $3.3 million in available salary-cap space, they didn’t need to ask the Oilers to retain any of Yakupov’s salary, as other clubs did.

“We thought it worth the gamble,” general manager Doug Armstrong said. “He’s a former first pick who needs a change of scenery. He’s excited to be here, we’re excited to have him.”

“Obviously I think it’s a good thing for me,” Yakupov said. “The last couple of days there have been rumors and I was expecting something. I was not expecting St. Louis. Now it’s happened and it’s a good move for me, to play in one of the best teams in the league. To play St. Louis was always hard. They’ve got some big bodies that are tough to play against. I’m really looking forward to it.

“I never had an opportunity to play on the best teams. This is the first time I’m going play in a really, really good team, that plays in playoffs pretty much every year. To feel that winning, I think it’s awesome. I don’t know what winning is, and I’d like to feel that and I think this is a team where I can feel it.”

It was believed by many around the NHL that a change of scenery for Yakupov was needed. The Blues believe St. Louis can be the right place.

“All he’s got to do is fit in,” Blues coach Ken Hitchcock said. “We just need a player that can fit in. We’ve done our homework and he’s a guy that ... he just needs to come here, fit in, and work with the rest of the guys.

“There’s always a perception of when you get drafted high that you should be ‘this’ or you should be ‘that.’ I’m not into what he’s supposed to be. I watched him play all the games that he played against us last year and I’ve got a good feel for what he is as a player, and I think there’s a fit with us ... even the way he is right now I think there’s a fit with us. Whether he gets to another level or not, the level he plays at, we can find a spot for him and work with him the rest of the way.”

Hitchcock said that Yakupov can play either wing, which means he’ll probably slot in on the third line, where Patrik Berglund is currently centering Dmitrij Jaskin and Ty Rattie.

“We’ve got lots of maturity on each line, so we’ve got a lot of veteran players that can help him move along and be a productive guy. But we don’t need him to run the power play, we don’t need him to come and light the lamp every night. We just need him to fit in and keep working hard and we’ll get a chance to hopefully teach him the rest of the stuff.”

The Blues were down to 14 forwards on the ice in practice Friday and still haven’t settled on whether they will carry 13 or 14 at the start of the season. Hitchcock had noted in recent days that none of the players battling for the final roster sports at forward — most notably Rattie and Landon Ferraro — had grabbed the job, and the team didn’t want to just give the job to someone.

The Blues managed only 19 shots on goal in Wednesday’s 4-2 loss to Washington in Kansas City. But Armstrong said the trade had nothing to do with the shape of the forward corps just five days before the start of the regular season.

“This isn’t based on a game or two or exhibition,” Armstrong said. “This is based on the ability to acquire a young player — he just turned 23 yesterday — that has a skill set that we think the game is going that way. It’s more of trying to get as many positive assets in our column moving forward.”

Yakupov said he got two texts from his friend Vladimir Tarasenko on Friday, the first wishing him a belated happy birthday and the second welcoming him to the team. Yakupov is in the final year of a two-year, $5 million contract and would count $2.5 million toward the Blues’ salary cap, a price they can afford because they have the money they had set aside for Sobotka, who had expected to be able to get out of his KHL contract, only to find, reportedly, a prohibitively expensive buyout clause. Yakupov will be a restricted free agent after the season.

“I think surrounding him with a more experienced team,” Armstrong said, “to play in a winning organization will make that transition easier. You never know what happens within an other organization. It looks like they’re on the right track. Nail needed a fresh outlook and we’re able to give it to him.”

Pochiro spent most of last season with the Quad City Mallards of the ECHL, where he had nine goals and 17 assists in 44 games and 69 penalty minutes. He also played one game for the Chicago Wolves in the AHL.

Yakupov will fly from Edmonton to St. Louis on Saturday. The Blues are off Sunday, and he’ll be on the ice with the team Monday. And he’ll be back in Edmonton soon. The Blues play there Oct. 20, their fifth game of the season.

Hochman: Deal with Oilers is low-risk for Blues

Trade reminds of when Blues sent Johnson to Avs.

Gordo: Blues could take a step back before moving forward

Shift to a faster tempo sets up a fascinating season as Blues transition from departed captain David Backes to new captain Alex Pietrangelo and from the steady netminding of Brian Elliott to the aggressive goaltending of Jake Allen.

Ortiz: Coaching under Hitchcock is graduate school for Yeo

Yeo has been a head coach but is eager to learn from Hitchcock.

The newest Blue won't play in tonight's preseason finale, but will dress in Wednesday's season opener

Blues left wing Vladimir Sobotka (right) gets whistled for tripping on this third period play during a game between the St. Louis Blues and the Edmonton Oilers on Tuesday, March 26, 2013, at the Scottrade Center in St. Louis. Edmonton right wing Nail Yakupov (left) was simultaneously flagged for unsportsmanlike conduct. Photo by Chris Lee, clee@post-dispatch.com