Ex-Stars coach Montgomery joins Blues staff, says he 'deserved' to be fired by Dallas
0 comments
Share this
Subscribe for $5 for 5 months
1 of 2 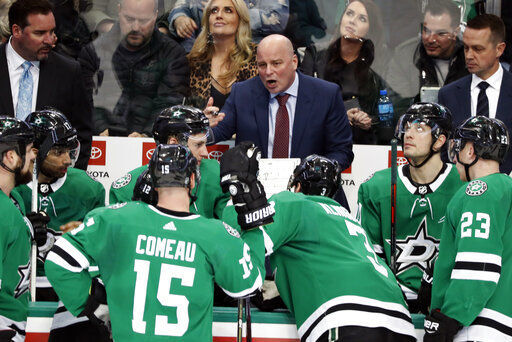 Jim Montgomery, who lost his job as coach of the Dallas Stars in late 2019  because of his troubles with alcohol, says he has changed his life and is "incredibly grateful" that the Blues have hired him as an assistant.

Coach Jim Montgomery was fired by Dallas on Dec. 10 for what the team termed "unprofessional conduct" and Montgomery later said it was because of a drinking problem.

The Dallas Stars have reached the Stanley Cup Final and the man who was their coach at the start of the season, Jim Montgomery, is joining the Blues staff as an assistant coach.

The Blues announced Wednesday that Montgomery will join Craig Berube’s staff. Though specifics on his coaching responsibilities haven’t been stated, he likely will be moving into the power play spot vacated by Marc Savard, who chose to stay with his family in Canada.

It’s been a turbulent season for Montgomery. He was fired by Dallas on Dec. 10 for what the team termed “unprofessional conduct” and Montgomery later said it was because of a drinking problem. “I’m not with them because of my own action,” he said Wednesday in an interview with Blues broadcaster Chris Kerber.

“Sometimes it takes an unbearable consequence in your life to happen to have an unbelievable breakthrough,” Montgomery told Kerber. “I didn’t know I was heading down the wrong path. Once I found out and you realize you do have a problem, it’s time to get to work and try and fix it. Now, for over nine months, I’m sober and I’m very thankful for what happened. Now I’m a much better person every day, a better husband, father, son, to the people who mean most in my life.”

“That firing was deserved. I wasn’t doing the right things,” Montgomery told TSN in May. “I felt I was being a hypocrite. I was asking my players to do the right thing and yet I wasn’t.”

Montgomery, whose wife is from St. Louis and who had moved here earlier in the summer before the job with the Blues was even a possibility, has been getting treatment. “I’ve sought that help,” he told TSN, “and that’s why I talk about that daily conditioning allows me to have a sober life and my life is much better. I tell you that a lot of people have told me that your life is going to get better and now that I’m coming up on six months, it does get better.

“I’m just thankful for all those reasons for the Stars letting me go.”

Montgomery, 51, signed a two-year contract with the Blues and is coming back to where his NHL career began. He was signed by the Blues as a college free agent in 1993 and played one season with St. Louis before bouncing around the NHL with four teams over the next five seasons. He then went into coaching, working his way up from college to juniors back to college, guiding Denver to a national championship, and then with the Stars. He was their coach in 2018-19 when they lost to the Blues in the second round of the playoffs. He had a 60-43-10 record with the Stars.

“My family and I are very grateful to Mr. (Tom) Stillman, Doug (Armstrong) and Craig for this opportunity to be part of the Blues organization,” Montgomery said in a statement released by the team.

Armstrong had also interviewed for the vacant Florida GM’s position. He had been in charge of the team’s draft since 2010, during which time the team picked up players including Colton Parayko and Robert Thomas while never picking higher than 20th in the draft in that span.

Bill Armstrong oversaw draft for the Blues. Also: GM Doug Armstrong says Tarasenko is 'on the road to recovery' after shoulder surgery.

In one season running the team's power play, the Blues were third in the league

Blues get two draft picks from Canadiens as they free up salary cap space, which was going to be needed whether or not they re-sign Pietrangelo.

Jim Montgomery, who lost his job as coach of the Dallas Stars in late 2019  because of his troubles with alcohol, says he has changed his life and is "incredibly grateful" that the Blues have hired him as an assistant.

Coach Jim Montgomery was fired by Dallas on Dec. 10 for what the team termed "unprofessional conduct" and Montgomery later said it was because of a drinking problem.