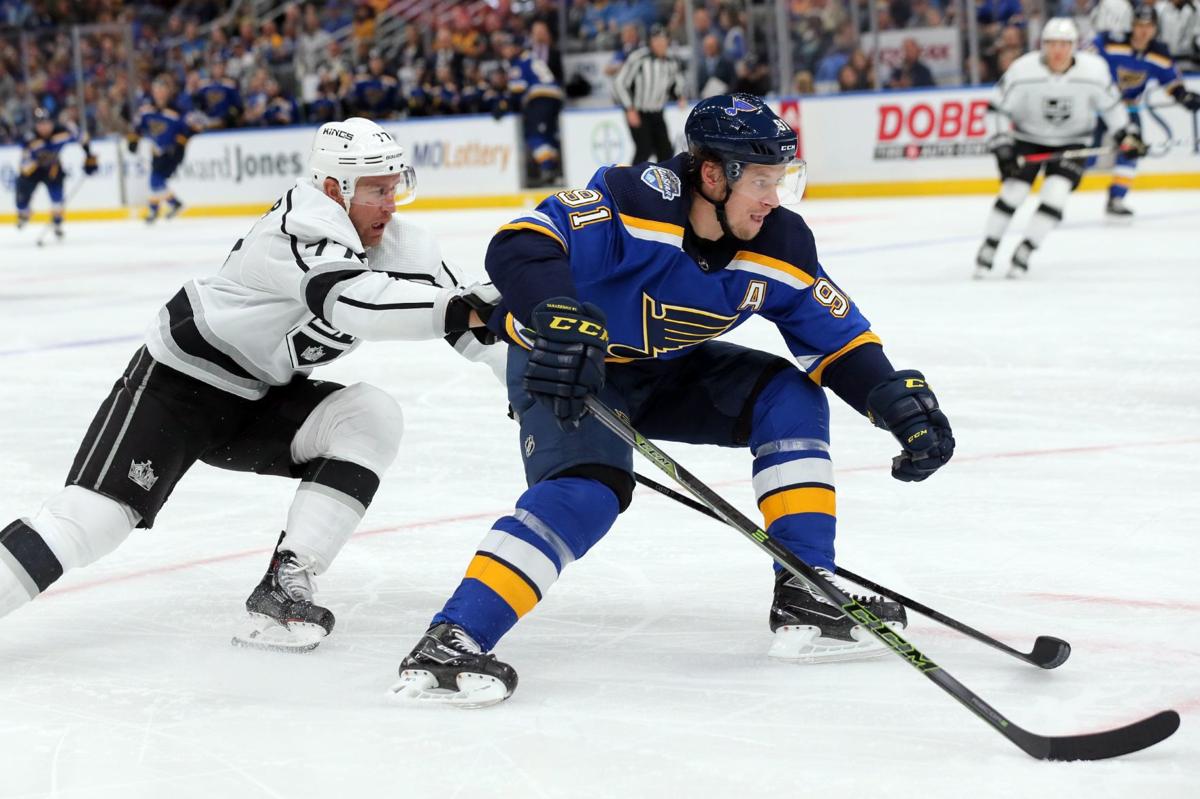 Los Angeles Kings center Jeff Carter tries to keep up with Blues right winger Vladimir Tarasenko as he drives to goal with the puck in a game at Enterprise Center in St. Louis on Thursday, Oct. 24, 2019. (David Carson, dcarson@post-dispatch.com) 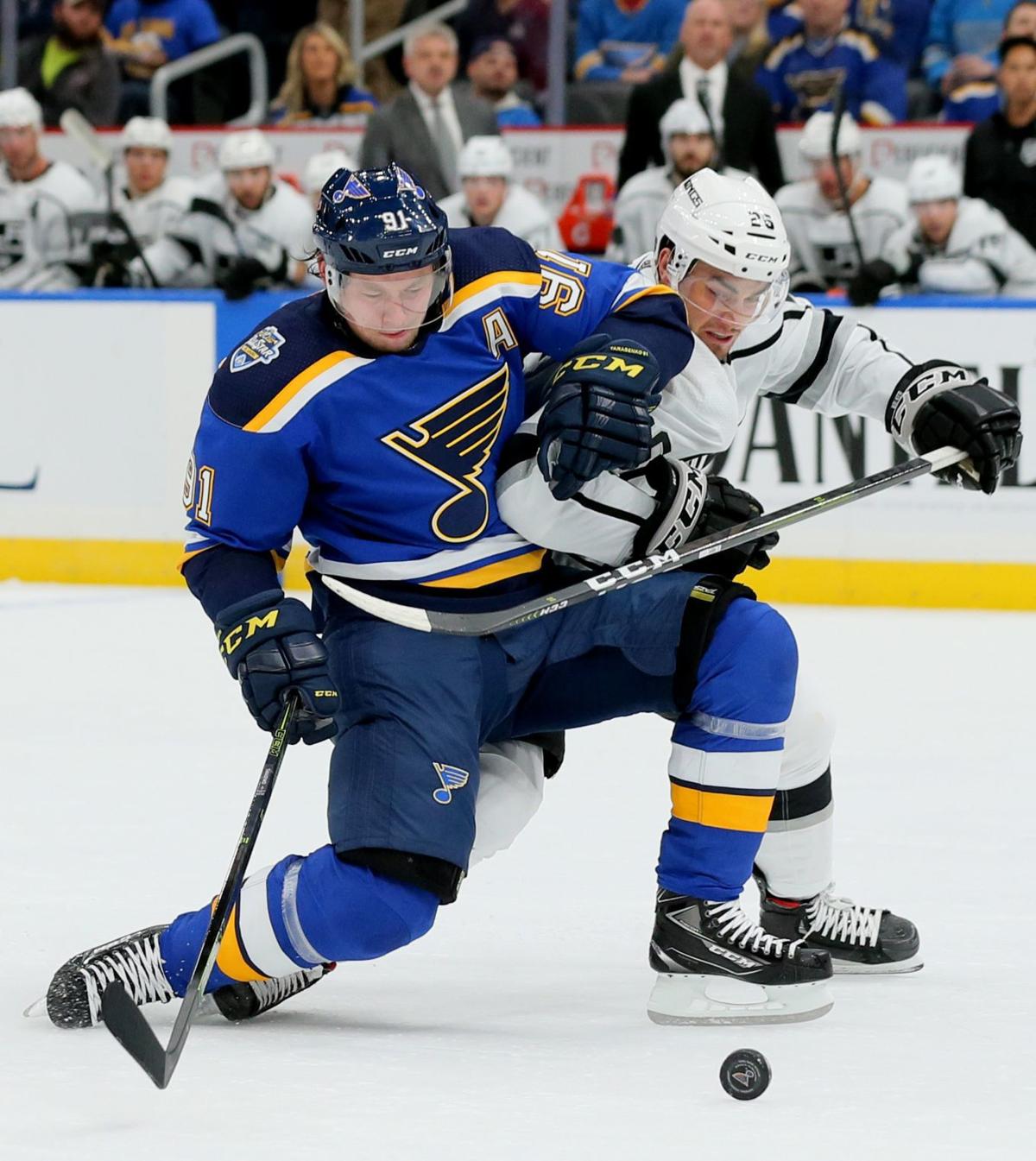 Blues right winger Vladimir Tarasenko fights for control of the puck with Los Angeles Kings defenseman Sean Walker at the Enterprise Center in St. Louis on Thursday, Oct. 24, 2019. Tarasenko has been practicing with the team recently as he comes back from shoulder surgery. (David Carson, dcarson@post-dispatch.com)

In discussing the Marco Scandella trade last week, Blues general manager Doug Armstrong hinted strongly but stopped just short of saying that Vladimir Tarasenko would be back before the playoffs started.

As the trade deadline came and went without a Blues’ move Monday, Armstrong said it.

“It was a situation where we’re getting Vladi back,” Armstrong said via Blues social media. “We think he should be back within the next few weeks. That’s a huge addition to us.”

Although he’s not taking part in most team drills, and is doing nothing resembling contact work, Tarasenko has begun skating with the team on a regular basis. All told, he has taken part in six team skates — either of the morning skate or optional skate variety — including the last five in a row.

He accompanied the team on its weekend trip to Dallas and Minnesota, which frequently indicates that an injured player is getting closer to a return.

Asked Sunday night about Tarasenko’s presence on the trip, coach Craig Berube replied: “Well, we can skate him. He came on the ice twice with us on this trip, so it was good.”

So the fact that the Blues made no moves on trade deadline day was not surprising given the team’s salary-cap constraints, Armstrong’s confidence in the current roster and the expected return of Tarasenko before the end of the regular season.

“The sooner we can get Vladi back the better,” Armstrong said. “I’d like to see him get as many (regular-season) games in as possible, to get his timing back before the postseason. He’s working very hard. I know he’s excited. ... We weren’t going to find a Vladimir Tarasenko at the trade deadline.”

Coming out of the All-Star break, Armstrong told the Post-Dispatch that he would look into trading for a top-six forward only if it became clear that Tarasenko would not be back from his left shoulder surgery until the playoffs started.

The fact that young talents such as Zach Sanford and Jordan Kyrou have turned up their games recently has helped ease Armstrong’s mind. So has the fact that the Blues snapped out of a 2-7-3 funk by winning their last four games — by a combined score of 13-2.

“Yeah, they certainly made it where we weren’t going to subtract from the team,” Armstrong said. “They’ve earned the right to stay together.”

Following the Blues’ 4-1 victory Sunday over the Wild, players expressed hope that Armstrong would indeed keep the team intact.

“I don’t feel like we need any changes,” forward Oskar Sundqvist said. “We’re starting to find our game and we’re a tight group in here, especially in the (defensive) zone. We’re finding our roles and that’s important now and during the whole season.”

The Blues’ scoring depth has really shown itself recently. Against Minnesota, Ivan Barbashev became the ninth Blue with at least 10 goals this season. Robert Thomas has nine goals, and four other Blues have seven goals.

The goaltending and defense suddenly have stabilized, and the addition of Scandella in place of Jay Bouwmeester, who recently suffered a heart ailment, is paying instant dividends.

Had the Blues continued struggling, maybe Armstrong would’ve figured out a way to make a move or two even with the team’s tight salary cap. But the team’s latest winning streak has reinforced the notion that it is capable of another Stanley Cup run.

“We’re in first place,” forward Brayden Schenn said. “We went in a (bad) stretch there where we’re still in first place. We’re fighting for first place. I’m sure they feel in that (front) office that we have a chance to do it again. It’s not easy, but we’re a veteran team that’s finding ways to win.”

The Blues are in the teens now in terms of remaining regular-season games, with just 19 left — 10 at home.

“Yeah, it’s crazy,” Thomas said. “This season, it’s gone by so fast, just with all the stuff going on. We’ve been playing pretty well, and when you’re playing well the season tends to go by pretty quickly.”

Even with their recent success, the Blues haven’t been able to create space between themselves and division pursuers Colorado and Dallas, which remain three and four points back, respectively.

Last season, the Blues won the Stanley Cup after finishing third in the Central Division. It was convincing proof that if you just get in the playoffs, anything can happen. But winning the division title might be more important this season, because the Blues haven’t been nearly as dominating on the road.

Until the back-to-back wins in Dallas and Minnesota, the Blues had not won a regulation road game since Dec. 23, against the Los Angeles Kings. Overall, they are a good but not great 16-11-5 away from home for 37 points, which ranks eighth in the league in terms of road points.

However, they have the best home record in the Western Conference, at 20-6-5, for 45 points. It’s the fourth-best home mark in the NHL, trailing only Boston (51 points), Pittsburgh (48) and Philadelphia (46).

So getting home-ice advantage for as long as possible in the postseason could be especially important this season.

“Any time you can get a home-ice advantage going into the playoffs it’s something that you really want to do,” Thomas said. “So that’s something we’re fighting for now.”

The Blues have a chance to get closer to that goal in a three-game home stand this week. They play Chicago on Tuesday, the New York Islanders on Thursday and Dallas on Friday.

“We’re going to play teams that are battling to get in (the playoffs),” Berube said. “Chicago, it’s always a tough game. So we’ve got to be ready.”

add to end of up next on pg1 for blues

Sundqvist gets stronger after injury, B5.

GM Armstrong says of defenseman from Minnesota-Duluth: '... potentially, if we get up and play, he could help us this year.'

He's doing much better now, but those on the team's travel party encouraged to continue self-quarantine measures and report any symptoms.

Broadcaster didn't get the results until Friday, eight days after he was tested.

(Updated) 'It's a little wild over here,' says Blues captain as he and wife Jayne take care of their 20-month-old triplets while Dad is off work.

Hockey writer Jim Thomas looks at seven Blues prospects whose junior seasons were shut down Monday because of the coronavirus pandemic.

Supporters respond from as far away as Arizona, Delaware and even Australia to a Post-Dispatch query on how they're dealing with suspension of NHL play.

'It's a little wild over here': Pietrangelo doing triple duty during NHL shutdown

On call all day as father of 20-month-old triplets, Blues captain can't wait till hockey resumes so he can get some rest.

NHL Network showing condensed replays of all seven games in a viewing marathon that runs from 7 a.m. to 8 p.m.

Hockey writer Jim Thomas looks at seven Blues prospects whose junior seasons were shut down Monday because of the coronavirus pandemic.

'It's a little wild over here': Pietrangelo doing triple duty during NHL shutdown

On call all day as father of 20-month-old triplets, Blues captain can't wait till hockey resumes so he can get some rest.

Los Angeles Kings center Jeff Carter tries to keep up with Blues right winger Vladimir Tarasenko as he drives to goal with the puck in a game at Enterprise Center in St. Louis on Thursday, Oct. 24, 2019. (David Carson, dcarson@post-dispatch.com)

Blues right winger Vladimir Tarasenko fights for control of the puck with Los Angeles Kings defenseman Sean Walker at the Enterprise Center in St. Louis on Thursday, Oct. 24, 2019. Tarasenko has been practicing with the team recently as he comes back from shoulder surgery. (David Carson, dcarson@post-dispatch.com)