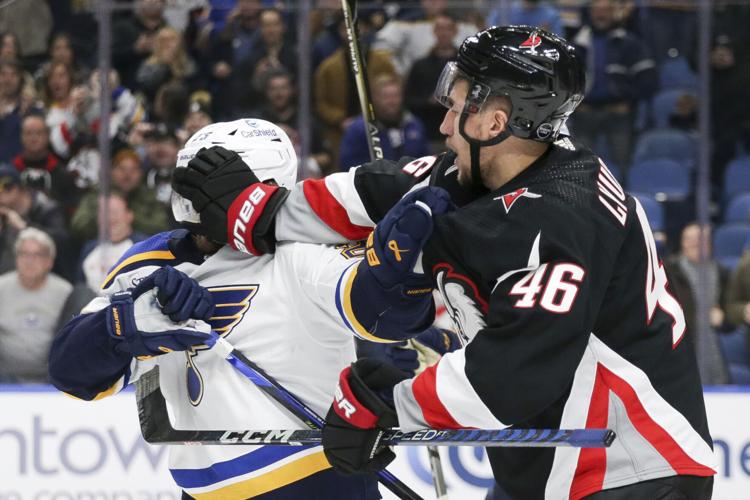 The Blues' Jordan Kyrou and Buffalo's Ilya Lyubushkin shove each other after a game Wednesday, Nov. 23, 2022, in Buffalo, N.Y. 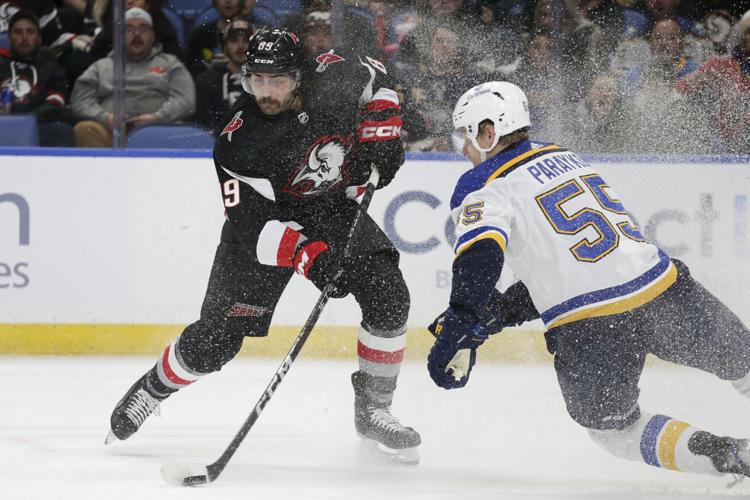 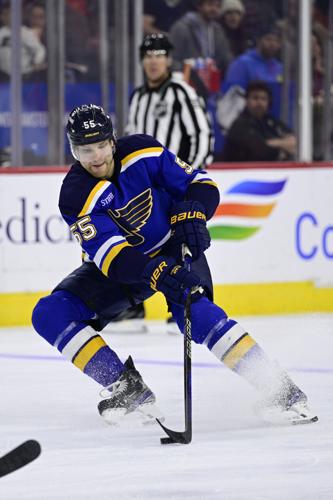 The Blues' Colton Parayko, seen  in action against the Flyers on Tuesday, Nov. 8, 2022, in Philadelphia, is one of the team's penalty kill stalwarts.

TAMPA, Fla. — After a promising start, the Blues’ traditionally strong penalty kill unit has been a tailspin, a slump that lasted through much of the team’s eight-game losing streak and pretty much continued during their seven-game winning streak.

And continued Wednesday when that winning streak was snapped in a 6-2 loss in Buffalo.

You have to keep scrolling down the page to find the Blues in the latest penalty kill rankings in the NHL. There they are, 30th in the league with a paltry 68.2% efficiency rate.

League rankings go back only to the 1977-78 season on the NHL’s media site, but that would be the lowest efficiency rate for a Blues team over that span if it carries over throughout this season.

“That’s where we’re at. We’ve obviously had a really good penalty kill for a long time. No doubt that we’ll get back to it.”

The Blues have a core group of about eight to 10 players who are being used most on the penalty kill this season. Nine are averaging at least one minute per game on the ice in shorthanded situations, and Parayko leads that group at 1:48 per contest.

Parayko is correct when it comes to Blues’ tradition of PK success. They have led the league in penalty kill success three times since that 1977-78 season, most recently in 2009-10 (86.8%). Eleven times over the past 15 seasons, the Blues have finished in the top 10 — including last season when they were fifth at 84.1%.

With assistant coach Craig MacTavish running the penalty kill in place of the departed Jim Montgomery, things started oh-so-promisingly this season — even dating back to the preseason. After giving up two power play goals in their preseason opener against Arizona in a game played in Wichita, Kansas, the Blues closed out the preseason killing off all 21 opponent power plays over the remaining seven exhibition games.

It was more of the same at the start of the regular season. The Blues went 11-for-11 on PKs in their first five games — a perfect 100% efficiency rating. It became 12-for-12 after killing off the first of two penalties against Nashville on Oct. 27.

But then, when Nathan Walker went off for tripping in the third period of a 6-2 St. Louis loss, Roman Josi scored on the Predators’ power play. Things haven’t been the same since.

Starting with that Josi goal, the Blues have given up at least one power play goal in 10 of 12 games. (In two other games over that span, the Blues committed no penalties.)

Starting with that Josi goal, the Blues have allowed 14 goals on 32 enemy power plays — that’s a horrendous 56.3% efficiency rate.

“It sounds like a cliché answer, but you gotta get back to the basics,” said Brayden Schenn, echoing Parayko. “On the reverse side of it, when you’re on the power play, things matter like clearing the puck and winning your battles and getting pressure on the PK. Not sitting on your heels and waiting for them to make a move first.

“There’s good players that play on the power play, and you gotta try and let them beat you with a good play.”

And not make it easy for them.

Of course, there were those highlight closing moments in the Blues’ riveting 3-2 victory Nov. 14 in Colorado when the Blues killed off 1:43 of a 5-on-3 power play at the end of the game, including about one minute of 6-on-3 after the Avalanche pulled their goalie.

Parayko, Ryan O’Reilly and Niko Mikkola were on the ice for the entire time on that PK.

But for the most part, the Blues PK has been dragging down the team over the last 14 games, making the pursuit of victory that much more difficult. Here are three prime examples:

• In a 7-4 loss Oct. 29 to Montreal, the Blues were up 3-2 in the second period. The Canadiens scored two power-play goals in a span of 2:41 to take a 4-3 lead and never looked back. Keep in mind, the seventh goal was an empty netter.

• Wednesday in Buffalo, the Blues were down 2-1 early in the second period but very much in the game and holding their own when the Sabres scored two power-play goals (by Victor Olofsson and Jeff Skinner) to take command with a 4-1 lead after two periods.

When asked if there was a common thread to the team’s PK woes, coach Craig Berube replied: “They’re different things at different times. But really, it boils down to urgency and being heavier on clears.”

And then, speaking specifically of the Sabres’ power play goals Wednesday, he added: “The one time, they come in the zone and they’re toe-dragging us on the second PP goal (by Skinner) — that’s unacceptable. You gotta kill that play.”

Both Ivan Barbashev (in the neutral zone) and Robert Thomas (just inside the blue line) had chances to kill the play before Skinner made an amazing move around Justin Faulk for a backhand goal.

“And on the first one (by Olofsson), we gotta get up on that one-timer,” Berube said. “It’s a read. Just get up on him. We know where we’re supposed to be on it and we weren’t.”

Olofsson was alone in the right circle, just waiting for a pass. No Blues player went over to cover him, with Mikkola the closest player.

On Friday, the Blues face one of the league’s top power play units in the Tampa Bay Lightning. They currently rank ninth in the NHL with a 25.0% success rate. Steven Stamkos is tied for fifth in the league with six power play goals.

Notebook: For Sabres, former Blue Tage Thompson has been worth the wait

St. Louis native and Tampa Bay Lightning left wing Pat Maroon has gotten the most out of his talent in a long NHL career.

Defensive zone giveaways have cropped up again, and they're costing the Blues, big-time

The Blues' Jordan Kyrou and Buffalo's Ilya Lyubushkin shove each other after a game Wednesday, Nov. 23, 2022, in Buffalo, N.Y.

The Blues' Colton Parayko, seen  in action against the Flyers on Tuesday, Nov. 8, 2022, in Philadelphia, is one of the team's penalty kill stalwarts.