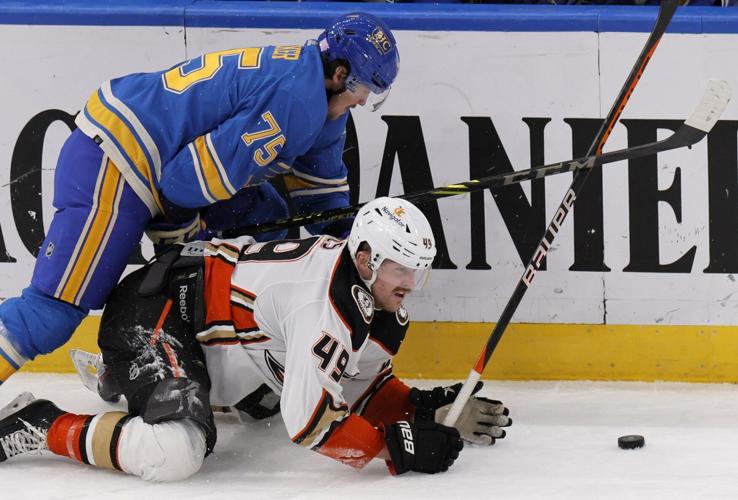 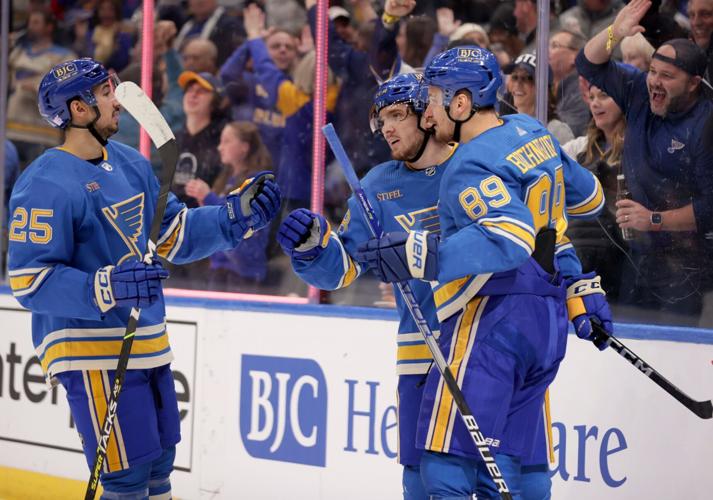 Blues left wing Pavel Buchnevich, right, is congratulated by teammates Robert Thomas and Jordan Kyrou, left, on Saturday, Nov. 19, 2022, after scoring a goal in the first period of a game against the Anaheim Ducks at Enterprise Center in St. Louis, Mo.

Don’t look now but the Blues are above .500. Who among you thought we’d be saying that before Thanksgiving? Especially when 11 days ago they lost their franchise-record eighth straight in a contest against the Philadelphia Flyers?

But it’s true. Saturday’s 6-2 victory over the Anaheim Ducks made it six victories in a row for the Blues and boosted their record to 9-8-0. Anaheim, meanwhile, continues to have the worst record in the league. Which is where the Blues were — of course you remember — on Nov. 8 with that 5-1 loss in Philly.

The Ducks fell to 5-12-1 and still haven’t won a game in regulation this season. (Their five victories have all come either in overtime or via shootout.)

Two goals by Pavel Buchnevich, and one apiece by Noel Acciari, Torey Krug, Brayden Schenn and Robert Thomas made it a season-high six goals in a game for St. Louis. Buchnevich also had three assists, giving him a career-high five-point game.

They did all this without Vladimir Tarasenko, who was scratched because of illness. The veteran forward entered the night tied for the team points lead — with four goals and nine assists. Defenseman Colton Parayko missed his second straight game due to an upper-body injury, but took part in the morning skate and expects to play Monday, against these same Ducks.

For the third game in a row, the Blues scored three goals in one period, and on Saturday it helped blow open the contest. This time it came in the second period. Pavel Buchnevich got the party started on a play that looked almost too easy.

Thomas sent the puck down low to an uncovered Buchnevich, who skated in front of the net and went forehand/backhand to beat Anaheim goalie John Gibson. Just 62 seconds into the period the Blues had a 3-0 lead.

Four minutes later, it became a 4-0 lead on Schenn’s fifth goal of the season. Schenn is a good player in transition, and this goal came on the rush, from the left circle on a pass from Buchnevich.

Anaheim finally got on the scoreboard when defenseman Cam Fowler shot through traffic and past Jordan Binnington, with Calle Rosen in the penalty box for tripping Max Jones. The Ducks have one of the worst power plays in the league, ranking 31st at 10.6 percent entering the game, but they got one here against a Blues penalty kill unit that has been struggling for much of the season.

But the Blues’ power play got that goal back just a few minutes later. Only 59 seconds after the Fowler goal, Anaheim’s Jakob Silfverberg went off for high-sticking Krug.

Krug then became the beneficiary of the power play, dropping into the slot for a Jordan Kyrou pass. Krug leaned into the shot and rocketed it past Gibson for his fourth goal of the season and his second goal in as many games.

Buchnevich had the secondary assist on the play, matching his career-high with four points (two goals, two assists). So it was 5-1 Blues, matching their season high for goals scored in a game. And the four-goal lead, both at 5-1 and earlier at 4-0 was their largest of the season.

All told, the four goals in the second period — three by St. Louis and one by Anaheim — came over just 7:42 of play.

In the third period, Anaheim cut it to 5-2 with another power play goal, but then Thomas’ score restored the Blues’ four-goal lead.

The Blues dominated the first period like maybe none this season in terms of zone time and shots on goal. At once point they had a 10-1 edge in shots but it was still a scoreless game. There were a few too many drop passes and behind-the-back stuff — too cute to suit coach Craig Berube’s taste.

But then came a simple hockey play and a goal by a player who epitomizes the simple game. Defenseman Justin Faulk, who usually isn’t shy about shooting and has one of the team’s harder shots, sent one toward the net from out by the blue line.

And there was Acciari at the net front for a tip-in, giving the Blues a 1-0 lead 12:44 into the contest.

Shot, tip-in. Goal. That’s about as simple as it gets. Acciari, a bargain-basement acquisition by the Blues in the offseason, has been one of the team’s most consistent performers. He plays what Berube calls hard hockey. It was his third goal of the year, on assists from Faulk and Schenn.

Less than 3 ½ minutes later, Buchnevich scored his third goal of the season and his second in as many games to make it a 2-0 contest. On this sequence the puck was loose and bouncing all around the slot area, until Thomas sent a backhand over to Buchnevich in the near slot for a quick shot and goal.

It was some pass. (OK, sometimes cute is good.)

Blues notebook: Parayko back at practice, nearing return to lineup

> Notebook: Parayko back at practice, nearing return to lineup, D4

Blues left wing Pavel Buchnevich, right, is congratulated by teammates Robert Thomas and Jordan Kyrou, left, on Saturday, Nov. 19, 2022, after scoring a goal in the first period of a game against the Anaheim Ducks at Enterprise Center in St. Louis, Mo.