Steen finally scores, but he's been making his mark before that
0 comments
Share this
Support local journalism for 99¢
1 of 3 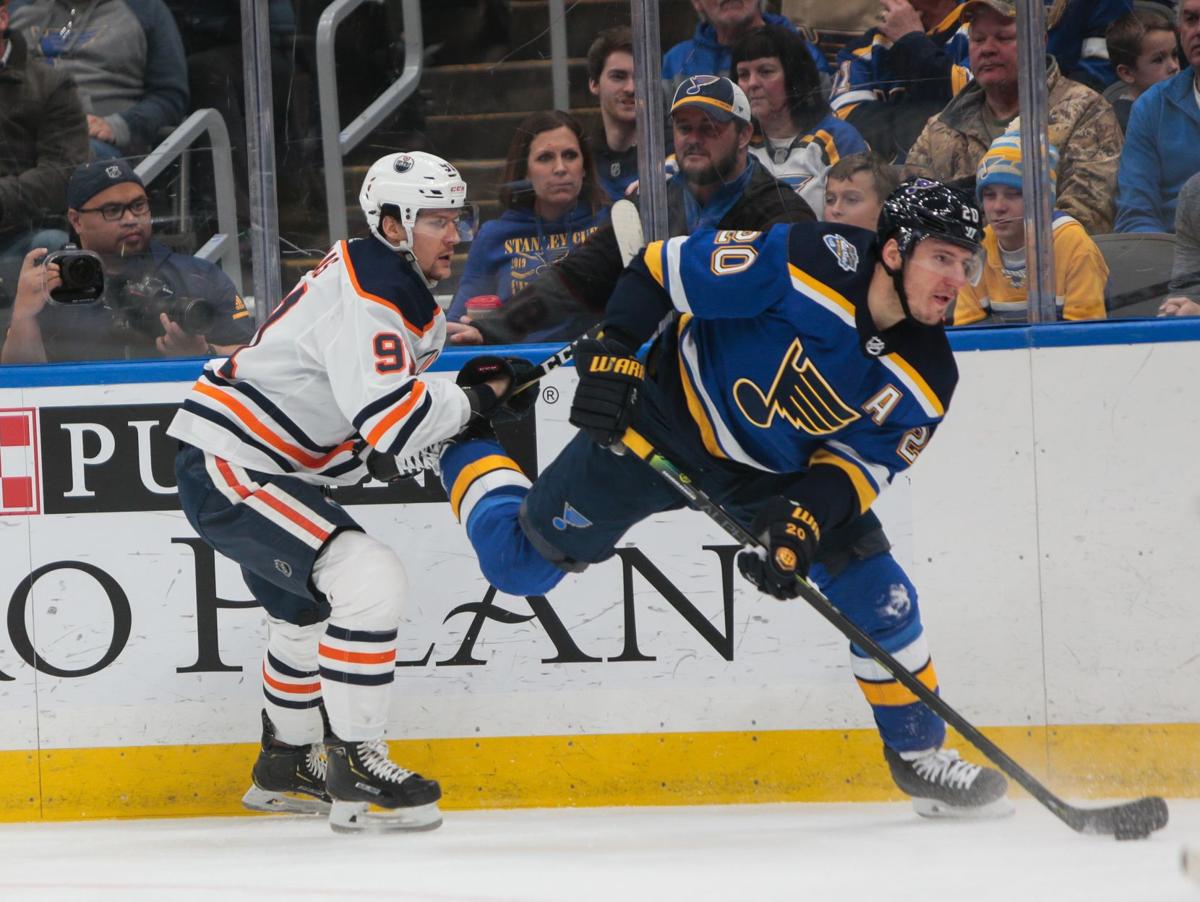 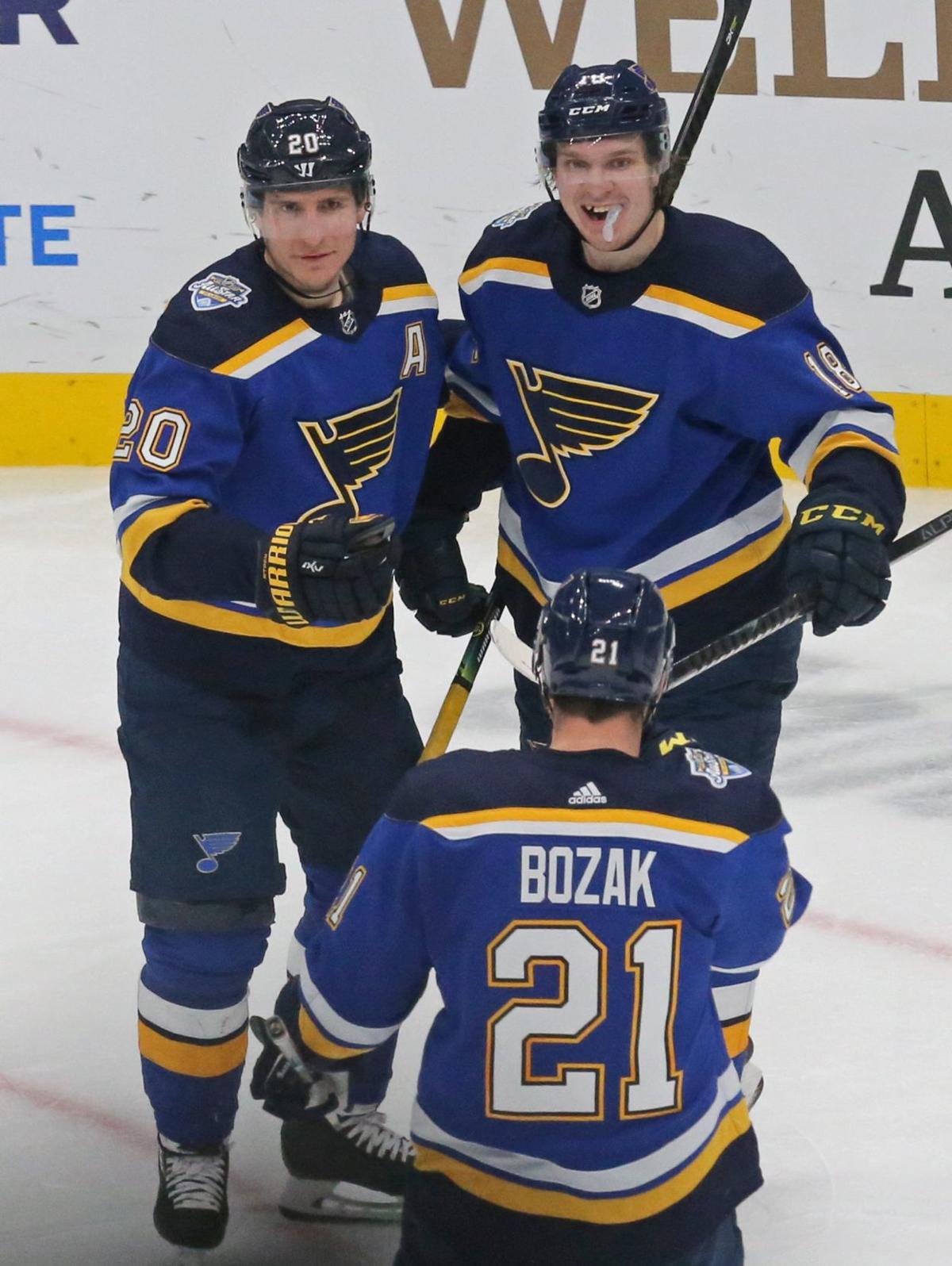 Blues Alexander Steen is congratulated by teammates Robert Thomas, at right, and Tyler Bozak after Steen scored his frist goal of the season during the third period of the game between the St. Louis Blues and the Buffalo Sabres on Thursday, Jan. 9, 2020, at the Enterprise Center in St. Louis. Photo by J.B. Forbes, jforbes@post-dispatch.com

That Blues forward Alexander Steen went into play Thursday night without a goal seemed surprising to his teammates. That he would finally get one seemed inevitable.

“I had no idea he hadn’t scored yet,” linemate Tyler Bozak said. “I was just expecting that he had with all the good little things he does out there on the ice.”

"Me and Bozie didn’t know until a couple of days ago that he hadn’t scored one yet," his other linemate, Robert Thomas, said, "and going into the third (Thursday) we really wanted to get him one."

They needed some help from Buffalo — had Curtis Lazar not blocked Bozak's chance at what looked to be an open net, the play would have been over before Thomas fed Steen for his second-chance goal — but Steen got it and then he added an empty-netter to finish the night with two after the Blues’ 5-1 win over Buffalo.

It was, by almost any definition, a long wait for Steen. Only one other skater from the opening night roster, defenseman Robert Bortuzzo, had yet to score a goal. Players who had cups of coffee with the Blues — Nathan Walker in five games, Klim Kostin in four games — had scored goals but Steen’s zero persisted. His efforts were stalled by the 16 games he missed with a high ankle sprain, but calendar aside, Steen got his goal in his 29th game. Never before had he carried a zero in the goal column past his 11th game of the season.

Was he wondering when it was going to come?

There were, as Bozak had noted, no worries about Steen because he was doing so many other things that the team needed him to do and a lot of other players were putting up hefty goal totals. Only a few days before, coach Craig Berbue had expressed his belief that the goal would come because of the way Steen was playing on the ice.

“He skates and works,” Berube said Friday. “He’s a great defensive player, he goes to the net. On Bozak’s goal, (Steen made) a great screen on the goal. He goes to the net and does all the dirty work.”

That’s part of the consistency of Steen’s game. He’s not the goal scorer he once was – he had 33 goals in the 2013-14 season – but he’s going to the net and making his presence felt just like he always has. On the Bozak goal, that’s where he was, getting shoved into the goalie and keeping multiple Sabres occupied to give Bozak a big hole to aim at.

“Nothing's really changed,” Steen said. “I've tried to do that for the most part. It especially helps my linemates trying to get some more space for them and create space for them. Just try and create that little bit of extra space for (Bozak and Thomas) to get their shots off and open passing lanes."

Steen was doing fairly well at the start of the season, but in the 17th game of the season, he suffered his high ankle sprain and was out four weeks. In the 12 games since he returned, he’s plus-11, which has given him a team-high plus-13 this season. He was plus-4 against Buffalo and the team is 9-3 since his return.

“I was pretty happy with how I was going before that (injury),” Steen said, “and that was a little unfortunate bounce. But that's what happens in this game. Over the years you get that experience. Things like that happen, but to some extent, that kind of slows you down mentally as well and you're able to analyze where you were and how it was going and what you want to do when you come back. I think first little stretch there was decent, but the last six or seven games or so (have been good).”

A year ago, Berube put Steen on the fourth line and Steen helped turn that unit into a group that played a key role in the team winning the Stanley Cup. This year, he’s been on the third line, with Bozak and Thomas, of late, and has turned that line into a dependable group. He’s become a role player, but he can fill any number of roles.

Part of Steen’s job now has been to help Thomas develop as a player, and the 20-year-old – he was six when Steen made his NHL debut – has seen his game flourish. Thomas has come into his own this season, having safely navigated the move from wing to center and helping everywhere. Thomas has eight points in the past seven games and as Steen said Thursday night, "the last three games or so, he's been incredible."

Steen has impressed too.

“He’s been a good player for a long time in this league,” Berube said. “He knows how to play the game. He’s intelligent. He’s got a different role than he had before, but the accepting of the role is huge. He does that, he accepted his role last year and helped us win a Cup. He does the same thing this year. Whatever we ask of him, he does it.”

“It’s incredible,” Bozak said. “He goes to the dirty areas, plays a physical style, an old-school style of hockey that a lot of people don’t love playing against him but we love him and I know me and Thomas love playing with him.”

Thomas is the future of the Blues. He’s 15 years younger than Steen, but is paying close attention to what he does.

“He loves getting in there and always having stick battles and that’s just with how smart he is," Thomas said. "He’s so easy to play with."

Binnington says his introduction song request was 'shut down'

He had requested "Pony" by Ginuwine as his introduction song for NHL All-Star Skills night.

The hands never leave you if you’re a world-class hockey player: 'Red Baron' redirects a pass into the net for Blues alumni in their 10-6 win.

The hands never leave you if you’re a world-class hockey player: 'Red Baron' redirects a pass into the net for Blues alumni in their 10-6 win.

What makes the Blues tick? All-Stars weigh in on the Stanley Cup champs

When it comes to the Blues, it begins and ends with defense, particularly their big, mobile D-corps.

Even the Cardinals got a nod: Matthew Tkachuk took off his Calgary jersey to reveal a baby blue jersey with Yadi's name and number on the back.

Goalie Joel Hofer, who led Team Canada to the gold medal, is 6-5 and 172 pounds — just as skinny as Blues star Jordan Binnington.

27 years ago: The night the goalies brawled in St. Louis

On Jan. 23, 1993, Curtis Joseph pummeled Detroit goalie Tim Cheveldae in a wild brawl 54 seconds into a 4-3 victory over the Red Wings at The Arena.

Armstrong: Blues could be in the market for top-six forward help

General manager says the health of Tarasenko, return of Blais and development of Kyrou will impact any decision.

A look at the biggest events for NHL All-Star Weekend in St. Louis

The All-Star Game is set for Saturday at Enterprise Center.

Contract status a distraction? Not for Pietrangelo, who's in the midst of a career year

Early last season, many fans and some media thought it was time to trade 'Petro' or at the very least strip him of his 'C.' Not anymore.

Blues Alexander Steen is congratulated by teammates Robert Thomas, at right, and Tyler Bozak after Steen scored his frist goal of the season during the third period of the game between the St. Louis Blues and the Buffalo Sabres on Thursday, Jan. 9, 2020, at the Enterprise Center in St. Louis. Photo by J.B. Forbes, jforbes@post-dispatch.com