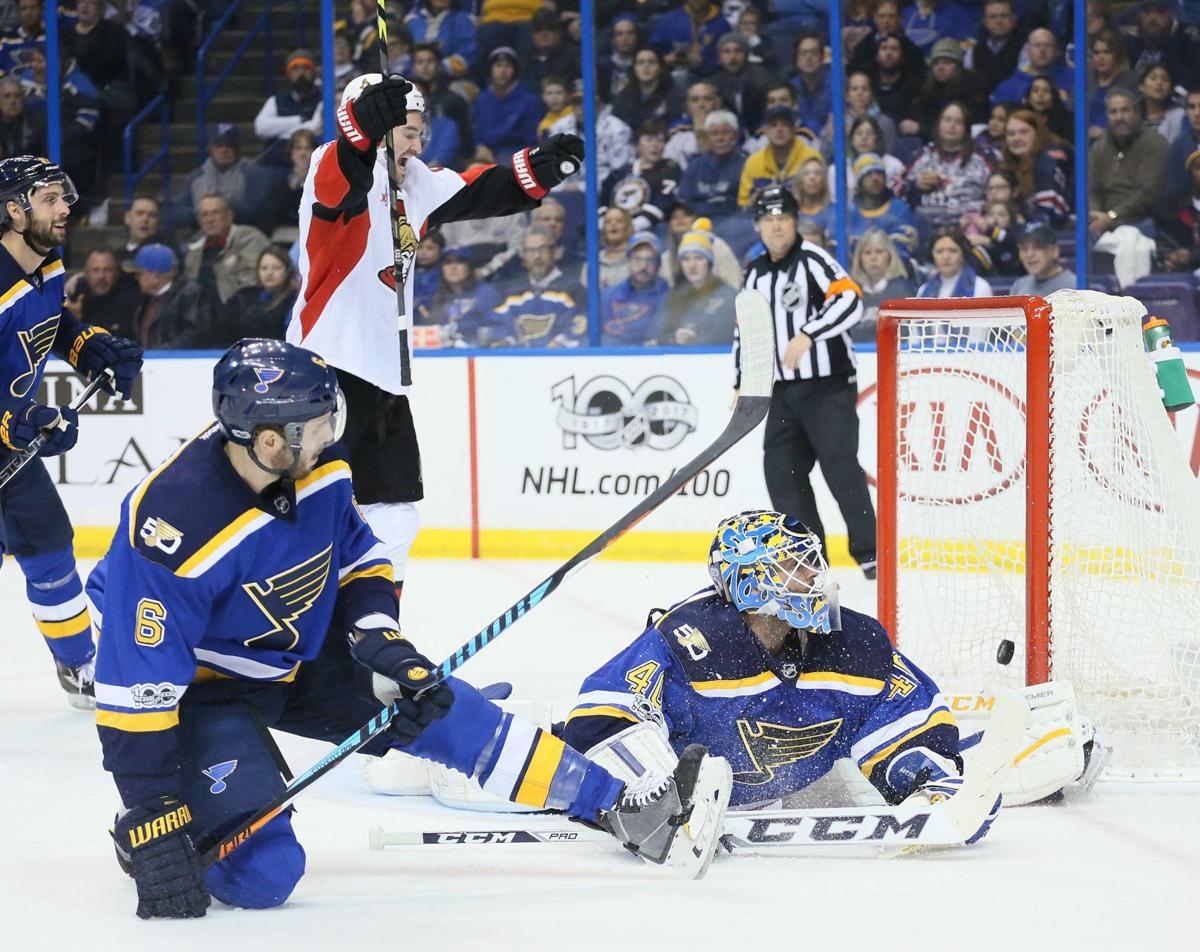 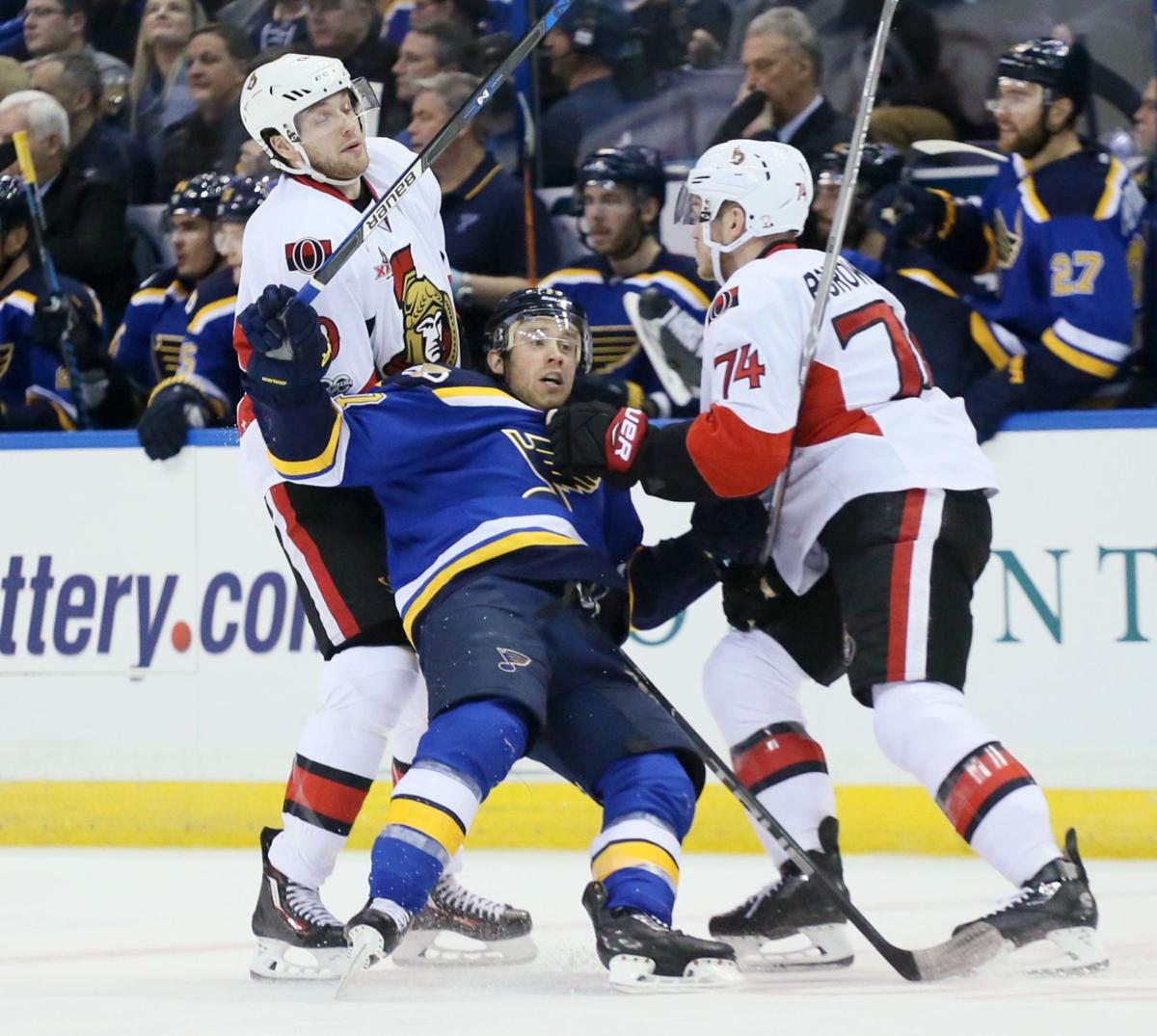 St. Louis Blues left wing Jaden Schwartz (center) is knocked down between Otawan Senators right wing Bobby Ryan (left) and defenseman Mark Borowiecki in the second period during a game between the St. Louis Blues and the Ottawa Senators on Tuesday, Jan. 17, 2017, at the Scottrade Center in St. Louis. Photo by Chris Lee, clee@post-dispatch.com

All of a sudden, home is where the heartache is for the Blues.

For the first part of the season, Scottrade Center was a dependable place for the Blues to pick up two points, but now, it seems like alien territory. The Blues lost for the fourth time in five games in their home building — that doesn’t count the Winter Classic win at Busch Stadium — and did it with something less than error-free hockey in a 6-4 loss to Ottawa on Tuesday night.

The loss snapped the Blues’ two-game winning streak, which while modest represented a significant accomplishment for a stop-and-start team and which had somehow been achieved on the road, where the Blues had won just five of 17 games before consecutive wins in San Jose and Anaheim. Back home, where the Blues had lost just five times in 25 games before Tuesday, it wasn’t as pretty.

“It’s just a tough game because I think when we look back on it and we wake up tomorrow, we’re going to feel like we had it,” said defenseman Kevin Shattenkirk, who had a goal and an assist. “We played a pretty good game and, again, just some mistakes that bite us.”

“To come back after the trip we had,” coach Ken Hitchcock said, “to come back and make it 3-3, have the momentum and give it back that quickly is disappointing.”

Carter Hutton got his third straight start in goal after allowing just one goal in the previous two games and stopped 18 of 23 shots in suffering his first regulation loss in his past seven starts. Before the game, Hitchcock said winning was the big thing now and they would stick with Hutton as long as they were winning, which means it’s possible Jake Allen could be back in goal Thursday when the Blues face Washington, the league’s best team, at Scottrade Center. After playing their fourth game in six days, the Blues will take Wednesday off, so there won’t be an announcement until Thursday.

The game turned on a play in the third period that wasn’t exactly a new one for the Blues. After falling behind 3-1, battling back to tie the score and looking to have the momentum going their way early in the third period, they made quick work of those thoughts. Ottawa got the puck in the Blues’ end and the Blues failed to clear it out of their zone multiple times. Eventually, Jaden Schwartz fell down with the puck, and Ottawa’s Mark Stone swooped it up and scored to make it 4-3.

“The fourth goal was a killer,” Hitchcock said. “It was a killer. Had puck support there, left it, didn’t clear it, had it on our stick three times. Forwards left the winger, we turn it over and that’s the game. … To come back and make it 3-3, have the momentum and give it back that quickly is disappointing.

“We had a chance to get it out twice and then the third time was the turnover, but on the third time, we didn’t stay patient with the winger. We left him.”

That goal came with 2:35 gone in the third, meaning the Blues had ample time to get an equalizer, but they couldn’t. With 6:07 to go in the game, Mike Hoffman scored his second goal of the night to make it 5-3 and effectively end it. The teams swapped goals in the final 1:13, with Ottawa scoring into an empty net and then Patrik Berglund getting his sixth goal in the past eight games.

The Blues’ battle to tie the score was good because they strongly disagreed with the goal that put them down two goals.

With Ottawa up 2-1 in the second, Hutton thought he had the puck covered at the post after Ryan Dzingel came in on a scoring chance. For four to five seconds, the puck was underneath Hutton’s skate but there was no whistle, and Ottawa’s Bobby Ryan came in and poked the puck in to make it 3-1.

The Blues objected and the referees conferred, but the call by referee Jake Brenk, who was on the opposite side of the net from the post and the puck, was not reviewable.

“I felt I (had it covered),” Hutton said. “We kind of had an argument in the third period about it. He came over to stake his claim he would have liked more pad coverage on it. I thought from his point of view I don’t know how he doesn’t blow the whistle. I thought in the third there was a play where we generate the puck at the net and there’s a quick whistle. It’s frustrating. From his point of view, I don’t see how there’s not a whistle. There’s not much else I can do. I’m trying to stay on the post as best I can and the guy pokes it in. What’s done is done now.”

“He said it was not reviewable,” Hitchcock said. “They declared it a goal. Hutts said he had it in his pad; he did have it in his pad. Referee said he saw the puck.”

The Blues tied the score on a goal by Shattenkirk from the blue line late in the second and then one by Alexander Steen early in the third as he came out of the box after serving a penalty.

The Blues had long stretches of offensive zone time, especially early in the second period, but they couldn’t score. After never trailing in the previous two games, they never led against Ottawa.

“I think we could have overwhelmed them more throughout the game,” said Steen, who had a goal and an assist. “I’d like to see us take control of the game a little bit more.”

“We just didn’t manage the puck very well on the boards today,” Hitchcock said. “We weren’t as determined and as effort-based on the boards as were the two games previous.”

Despite recent wins, Blues still have areas of concern.

Ken Hitchcock had too much patience with goaltender Jake Allen, but there’s no denying that the Blues’ legendary coach had no choice but to ma…

Blues lose defenseman as they try to send him back to AHL.

St. Louis Blues left wing Jaden Schwartz (center) is knocked down between Otawan Senators right wing Bobby Ryan (left) and defenseman Mark Borowiecki in the second period during a game between the St. Louis Blues and the Ottawa Senators on Tuesday, Jan. 17, 2017, at the Scottrade Center in St. Louis. Photo by Chris Lee, clee@post-dispatch.com