Where’s Towel Man? Reluctance to get COVID tests has kept him from most Blues games
0 comments
Share this
{{featured_button_text}}
1 of 3 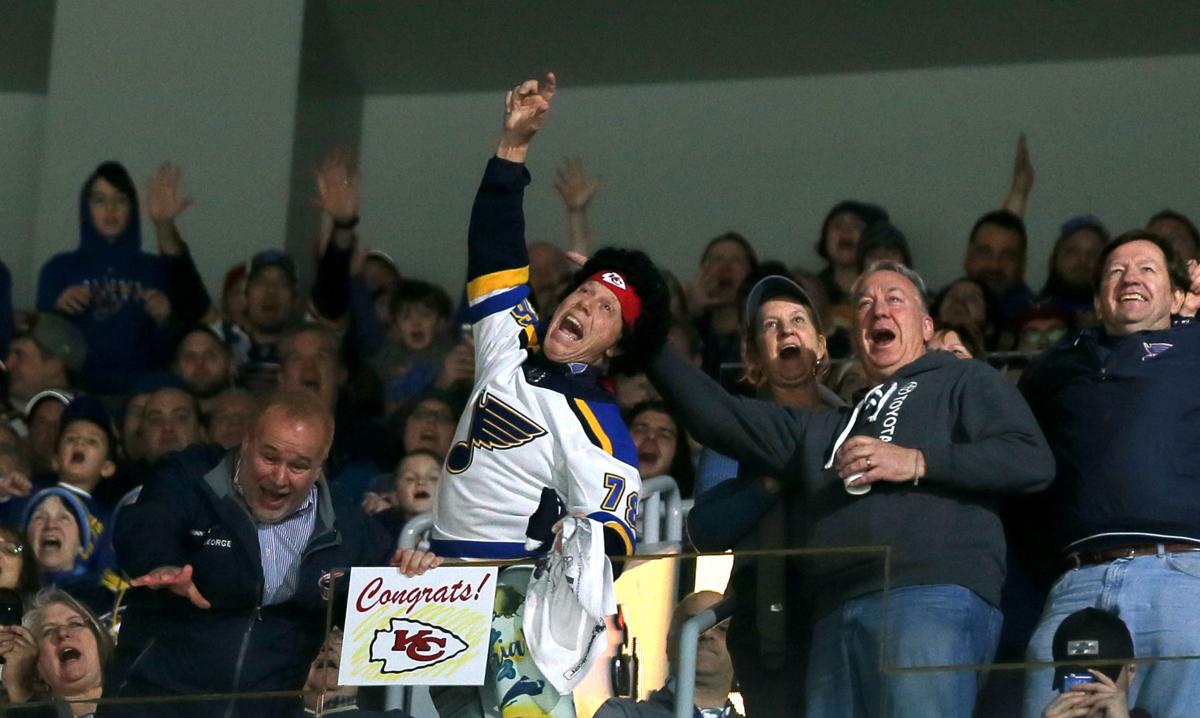 Blues "Towel Man" Ron Baechle leads a cheer after the team scored its fifth goal of the game during a game against the Carolina Hurricanes at Enterprise Center in St. Louis on Tuesday, Feb. 4, 2020. Photo by David Carson, dcarson@post-dispatch.com

Blues "Towel Man" Ron Baechle said the team's COVID attendance policy has led him to curtail the number of games at which he is performing.

Ron Baechle, aka Towel Man, high-fives the crowd at the start of the Blues' Stanley Cup victory parade on June 15, 2019 in downtown St. Louis.

He’s as much a part of the Blues’ game-day atmosphere at Enterprise Center as Tom Calhoun on the P.A., Jeremy Boyer on the organ, the “Power-Play Dance” and the group singalong to “(Take Me Home) Country Roads.”

But Towel Man sightings have been few and far between this season for home games.

Towel Man, a k a Ron Baechle of Barnhart, did his towel-waving thing for the home opener against the Los Angeles Kings on Oct. 23, a seven-towel game. He was back for the three-towel Nashville game on Nov. 11. And that’s been it for the nine home games played so far.

Several fans have contacted the Post-Dispatch wondering about his whereabouts. Was he ill? Semi-retired? Disinterested?

None of the above.

Baechle had COVID in the past, and because he’s had it doesn’t feel it’s necessary to get vaccinated. Under Blues COVID protocols, unvaccinated fans attending games at Enterprise Center must show proof of a recent negative COVID test.

Baechle doesn’t like the idea of getting tested basically for every home game — there are 41 of them — so he’s been to only two so far.

That pretty much sums it up?

“That is pretty accurate,” said Baechle, who at first was reluctant to talk. “I’m sure at some point, I’d like to think that the policy’s going to change (at Enterprise). I know for a fact everybody’s doing what they think is best for them.”

Baechle definitely is conflicted by all this. For one, he wanted to make it clear that he’s no raging anti-vaxxer.

“I’m not looking to be anybody’s spokesperson,” he said. “I hate that all this stuff gets (politicized). I respect everybody’s decision. I think everybody should have that courtesy, I guess.

“There’s so many things that just don’t make sense to me — that 30,000, 40,000 people can go watch a baseball game, and I understand it’s outside. But you’re still next to each other. The NFL is packing football stadiums — somehow that’s not dangerous. I guess hockey fans are that dirty, I don’t know.”

He was joking when he made the “dirty fans” remark.

The baseball Cardinals began last season with seating limited to about one-third of capacity — roughly 15,000 — with social distancing and a mandatory mask policy. By mid June, Busch Stadium went to full capacity with masks no longer mandatory for those who were vaccinated.

The Blues began this season with full capacity, and under a plan that had to be approved by the City of St. Louis, require fans to show proof of vaccination or proof of a recent negative COVID test.

Shortly after the Blues announced their COVID policy at Enterprise in September, team chairman and governor Tom Stillman said he thought the guidelines were “the best thing to do to protect the health of our fans, our staff, our players and the community.”

Stillman went on to say: “We realized that some fans, some ticketholders, would be unhappy. We’re trying to work with them and see what we can do for them. At the same time, we also knew that a number of people would be more comfortable coming if we did have these rules. And I think we’re seeing more of that than the negative reaction.”

Attendance has been strong so far this season, with four sellouts of 18,096. The five other home games have all drawn in excess of 16,000.

Six Blues, including team captain Ryan O’Reilly, have missed games after testing positive for COVID, so it seems unlikely the policy will change anytime soon. But some fans, including Towel Man, are staying home. And for him, it’s tough to do so.

“There’s no place I’d rather be” than a Blues game, he said.

He has been waving and throwing towels after each Blues goal for 32 years. He got the idea after attending a Peoria Rivermen game, at a time when the Rivermen were a Blues’ minor-league affiliate.

“There was somebody doing something pretty similar to it,” Baechle said.

So he brought the idea back to St. Louis. Even casual Blues fans know the drill.

After each Blues goal, he waves a small towel from his spot in the stands with the crowd counting chanting out the goal count.

Baechle has 200 towels made for each season. Each includes names of sponsors — yes, sponsors — and includes a picture of the Towel Man. He brings seven to each game. On the rare occasion when the Blues score seven or more goals, he ties a skate lace to the towel for the seventh goal chant, so it never lands. And reels it back in — in case there’s an eighth goal.

(The Blues scored nine times last season in an April 9 game against Minnesota.)

“I was six years without missing a game before COVID hit,” Baechle said. “Before that, I would average one-to-three games a year that I might miss.”

He will be at seven games missed and counting — well, actually not counting goals — entering Saturday’s home contest against the Columbus Blue Jackets.

In his absence, several interim Towel Men (and a Towel Woman for the Vegas game) have filled in.

“I tried to get people from my section, the ones that are there all the time,” Baechle said. “Everybody said they want to do it.”

But when will Towel Man himself do it again?

Contest against rival Blackhawks will be streamed on subscription services ESPN+ and Hulu.

Forward is called up from Springfield; Klim Kostin heads to long-term injured reserve.

In the team's 12th game in 21 days, Buchnevich and Barbashev each score twice in rout of Columbus

Suddenly hot Buchnevich getting the hang of Blues hockey

Head-butt suspension slowed him down early in season.

Backup Ville Husso will see a lot of action over the next 10 days. Team also calls up goaltender Charlie Lindgren from their AHL affiliate, but will have to use an emergency backup tonight

In his first NHL game in St. Louis, the son of defenseman Jeff Brown scored in the Blues' big comeback win.

Veteran forward is sidelined, apparently because of a concussion.

Team plays most of the game with just 10 forwards after Perron leaves with upper-body injury.

Blues "Towel Man" Ron Baechle leads a cheer after the team scored its fifth goal of the game during a game against the Carolina Hurricanes at Enterprise Center in St. Louis on Tuesday, Feb. 4, 2020. Photo by David Carson, dcarson@post-dispatch.com

Blues "Towel Man" Ron Baechle said the team's COVID attendance policy has led him to curtail the number of games at which he is performing.

Ron Baechle, aka Towel Man, high-fives the crowd at the start of the Blues' Stanley Cup victory parade on June 15, 2019 in downtown St. Louis.