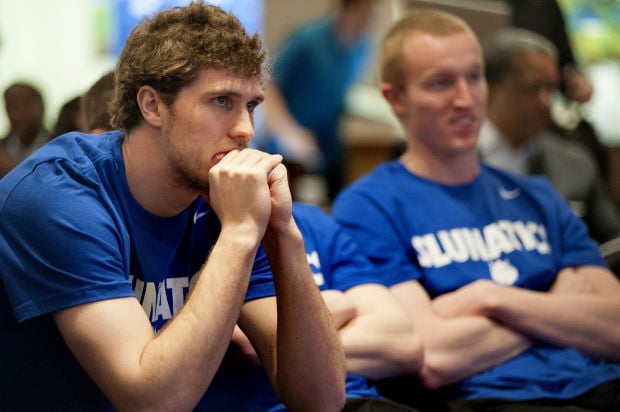 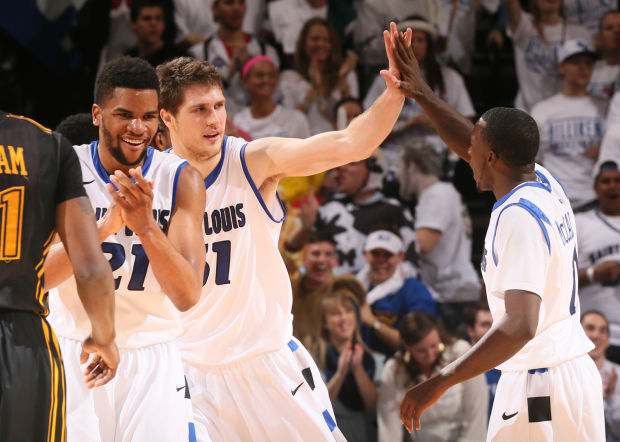 ORLANDO, Fla. • New Zealand is not a big country. Its population is about 1½ times that of metropolitan St. Louis. The country is long and thin and at its widest is less than the distance between St. Louis and Kansas City. There are about seven sheep for every one resident.

Because it is so small, a population of 4.5 million, the country’s youth frequently head abroad, for education and experience. They head to Australia, the not-so-close next-door neighbor (about 1,500 miles away) to the west. They head to the United Kingdom, with which New Zealand shares a queen. And, like St. Louis University basketball player Rob Loe, they head to America.

Loe came to America to play basketball and get an education, to prepare him, he said, for whatever happens after he’s done playing basketball. The end of both is in sight.

SLU begins play in the NCAA Tournament on Thursday, in Orlando, Fla., against North Carolina State and each team still playing is entitled to just one loss before the season ends. Loe will graduate at the end of this semester.

He is part of an exceptional SLU senior class that has taken the program to levels not reached in 40 years. Loe has been an integral part of that, moving into the starting lineup as a freshman. Only Dwayne Evans has started more games than Loe, and that’s only because Loe got sick during the team’s trip to Mexico as a freshman.

While what everyone notices is Loe’s outside shooting — for his first two seasons, there seemed a fascination with a 6-foot-11 guy taking 3-pointers, which often led to coach Rick Majerus talking about trapezoidal keys — Loe’s strengths are much more than that. He doesn’t block a lot of shots, though he is sixth on the school’s career list (with 88), but he alters many more. Some of the key plays for SLU this season, such as Jordair Jett’s game-winning drive against Massachusetts, came after a defensive stop by Loe.

The coaching staff values his intellect. Coach Jim Crews, asked for a word to describe Loe, offered “wise.” Freshman Reggie Agbeko said the coaches told him if he doesn’t understand something that he should first ask Loe.

“The coaches will talk about a play we’re running,” Agbeko said, “and something will happen and Rob will change it and do it a certain way, which will make it more perfect.”

When Loe came out of the game early in SLU’s game at Virginia Commonwealth, he sat on the bench near the coaches and was yelling at teammates on the court, not words of encouragement, but strategy.

“He’s one of the smartest players I’ve ever come across,” said SLU assistant Calbert Cheaney, who played 13 seasons in the NBA. “He knows what to do and when to do it. He’s a great passer who thinks one or two moves ahead, and defensively he does a great job at the rim, not fouling but at the same time affecting shots.”

As visible as he may be, Loe also might be the team’s most unappreciated player. On a team with two other players who made the all-conference first team, it was Loe who had the best plus-minus number, the relationship between the number of points scored with him on the floor vs. the number of points allowed.

Going into the conference tournament, SLU was plus 297 with Loe on the court; Evans was second at plus 268.

“Evans and Jett deservedly get a lot of attention,” VCU coach Shaka Smart said earlier this season. “Those guys are first-team all-league players. But Loe is a really good player. He’s a unique player because of his size and ability to play on the perimeter.”

He’s a unique player for a lot of other reasons, too.

Loe was born in England. He has dual citizenship, though he uses his New Zealand passport for travel, he said, because “people like the Kiwis better.”

He spent his early years in a town called, poetically, Ashby de-la Zouch, a small city in England’s Midlands near Leicestershire. When Loe was 4, his parents moved to New Zealand.

“We were fed up with the rat race in the UK,” his father, David, said. His mother, Beth, a pharmacist, got a job there and eventually, David, an engineer with a construction company, found work, too. The first year was tough, David recalls, owing in part to a recession in New Zealand at the time.

“Like all things in life,” David said, “you work at it and get there.”

The big sport in New Zealand is rugby, and Loe’s father played one step below the professional level in England. But Rob — his parents usually call him Robert — was pulled toward basketball, a sport his mother had played in college. When Loe started playing miniball, a junior version of basketball, at about 8, he was a head taller than his peers. No one in New Zealand is ever far from the ocean (the Loes’ current house is about a six-minute walk from the beach), so water sports are common for young New Zealanders.

Loe dabbled in sports such as soccer, volleyball and water polo and did well in all of them, but basketball was his game of choice.

There was a basketball rim at the Loes’ first house and when they moved to a new home, when Rob was about 12 (and about 6-5), David put in a concrete half-court for Rob and his older brother, Jonathan. By high school, Loe had caught the attention of the New Zealand youth national teams, which is the next stop for up-and-coming Kiwi talent.

Because of that, when Loe hit America to come to SLU, he was no wide-eyed kid. He already had gone on tours of Europe and Australia with New Zealand’s national team and been to America on recruiting trips and for games. (He also visited Pittsburgh, Colorado, St. Mary’s and Georgia Tech, as well as making an unofficial visit to Arizona.) He chose SLU because he liked the people.

Through things such as Skype and Facebook, Loe has been able to keep in contact with friends and family. His parents search the Internet for feeds of SLU games and watch at odd hours; Auckland is 18 hours ahead of St. Louis. A 7 p.m. Saturday game at Chaifetz is at 1 p.m. Sunday in New Zealand. (Right now, that doesn’t matter; his parents have made the trip to America for the NCAA Tournament and have been joined by Jonathan, who’s finishing law school at Arizona. Asked what it’s been like to follow Rob’s basketball career, David said, “Very expensive.”)

The list of great New Zealand basketball players is not long. Only four players born there have played in the NBA. Only one, Sean Marks, who won an NBA title with San Antonio in 2005 and is an assistant coach there, lasted longer than two seasons.

New Zealand has a domestic league, but the level is pretty low. Auckland has a team that plays in the Australian league; its practice facility is not far from the Loe family house, and the Loes have season tickets. Loe will be called back for a camp with the New Zealand national team this summer for an international tournament.

Loe is more than satisfied with his decision to leave home and sample life in America.

“I think it’s lived up to what I thought it would be,” he said. “When you think you’re going to play college basketball, you start dreaming. I had a pretty great time here. I met great people, made great friends. That’s what I hoped for. To get a great education, play basketball and grow as a person.”

What lies ahead for Loe, he doesn’t know. He wants to keep playing basketball. Where that will take him, he has no idea. His British passport will make it easier for him to play in Europe if that’s where the opportunities are.He wouldn’t mind a little more certainty, but he’s OK with being up in the air.

“After my graduation, I’m flying to my brother’s graduation the day after,” he said. “After that, I don’t really know what’s going on. I’m a little uneasy, but I can’t really do anything about it.”

He has learned a lot about basketball in four years here, going from someone who admittedly didn’t know that much about the game to someone held in high regard for his basketball IQ, for making his teammates better players.

“It’s been a great experience,” he said. “Being away from your family, you learn quick what you have to do. I’ve learned a lot at school; SLU has been a great education, that’s why I came to the States, for the education so I can have something whenever I stop playing basketball. I’m learning about myself, what I am and who I am.”

DAYTON, Ohio • Given a second chance, North Carolina State’s T.J. Warren put on a show in the NCAA Tournament.

Need help with your bracket? See each team at a glance

Don't know the difference between Coastal Carolina and North Carolina Central? Let Jeff Gordon lend a hand with helpful capsules on all the teams.

After you consult your bracketology sources for your picks, print them out on our bracket.