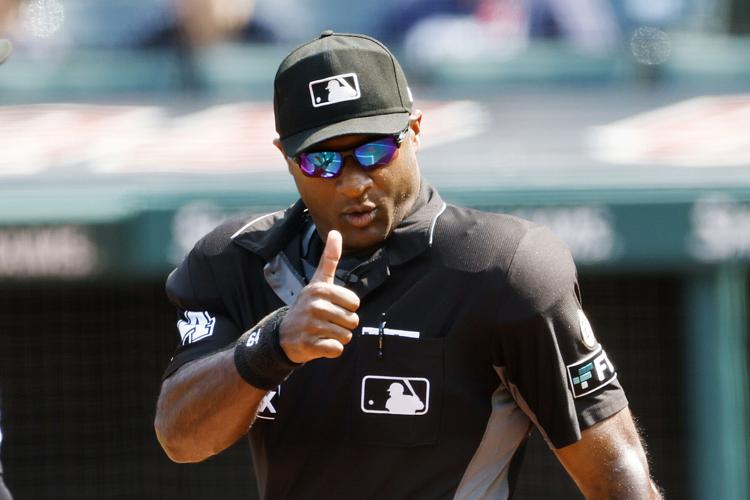 Umpire Alan Porter signals before a baseball game between the Chicago White Sox and the Cleveland Guardians, Sept. 15, 2022, in Cleveland. 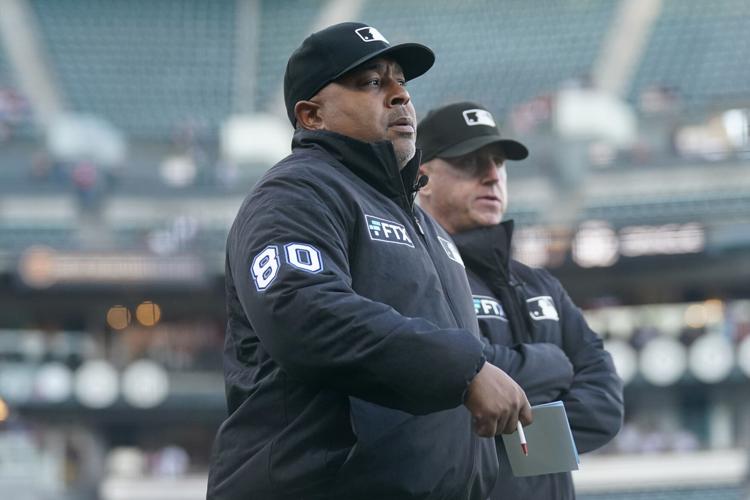 Umpire Adrian Johnson (80) during a baseball game between the San Francisco Giants and the San Diego Padres in San Francisco, on Aug. 29, 2022.

NEW YORK — Alan Porter and Adrian Johnson became the MLB's second and third Black umpire crew chiefs as the league announced 10 retirements along with promotions from the minors.

Kerwin Danley was the first Black crew chief in 2020. He retired after the 2021 season.

Ten minor league umpires were promoted to the big league staff, all with 156 to 473 games of major league experience as fill-in umpires:

Hallion was a big league ump for 30 years and worked the 2008 and ’21 World Series along with seven no-hitters.

Barrett worked five World Series during 26 years in the majors and was behind the plate for the record 18-inning World Series game, a 3-2 win by the Los Angeles Dodgers against Boston in 2018 that took 7 hours, 20 minutes and 561 pitches.

Barrett is the only umpire to call balls and strikes for a pair of perfect games, by the New York Yankees’ David Cone in 1999 and by San Francisco’s Matt Cain in 2012. He also was behind the plate for a no-hitter by the Los Angeles Angels’ Ervin Santana in 2011 and a Seattle combined no-hitter in 2012, just five days before Cain’s perfect game that June 13.

Foster, a big league ump for 24 years, worked the first big league games in Japan, a two-game series between the Chicago Cubs and New York Mets in 2000.

Gibson, a 24-year veteran, umpired in the 2011 World Series and was behind the plate for a perfect game by Arizona’s Randy Johnson in 2004 and a no-hitter by the Dodgers’ Clayton Kershaw in 2004.

Holbrook worked three World Series during a 22-year career, including behind the plate for the Cubs’ Game 7 win at Cleveland in 2016 that gave Chicago its first title since 1908.

Meals, a 26-year veteran, umpired in a pair of World Series and was behind the plate for Kerry Wood’s 20-strikeout game for the Cubs in 1998.

Timmons, Welke and Reynolds each worked 23 seasons. Walke, brother of former big league umpire Tim Welke, umpired in the 2015 World Series, while Timmons was in the 2018 Series and Reynolds umpired in a pair of Series.

METS: Catcher Tomás Nido and the New York Mets agreed to a $3.7 million, two-year contract. Nido gets $1.6 million and $2.1 million in 2024, and he can earn additional performance bonuses.

Brad Underwood spends much of halftime alone on Illinois' bench vs. Nebraska basketball

Tipsheet: Brady refused to go out on top, then things got complicated

Tom Brady wasn't great in his final NFL season. He wasn't terrible either. He was just a guy trying to play through some things -- and it didn…

Hochman: What matters isn’t Chip Caray’s relations to Harry, but his relationship with St. Louis

Like many other St. Louisans who leave — but still follow the Cards from afar — Chip Caray has come back home. And so we’ll welcome him into o…

Umpire Alan Porter signals before a baseball game between the Chicago White Sox and the Cleveland Guardians, Sept. 15, 2022, in Cleveland.

Umpire Adrian Johnson (80) during a baseball game between the San Francisco Giants and the San Diego Padres in San Francisco, on Aug. 29, 2022.