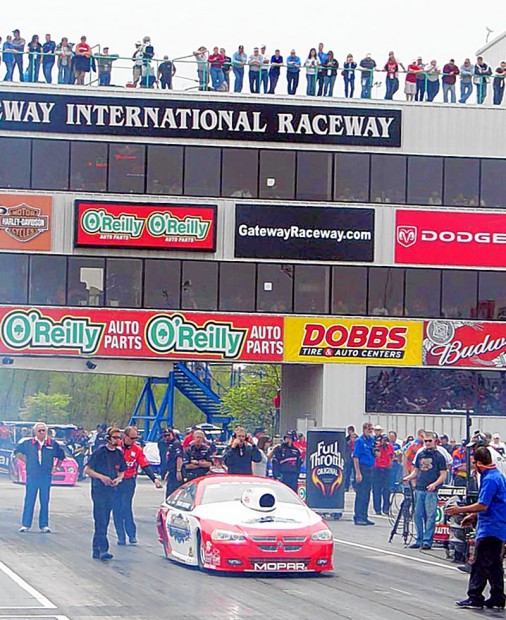 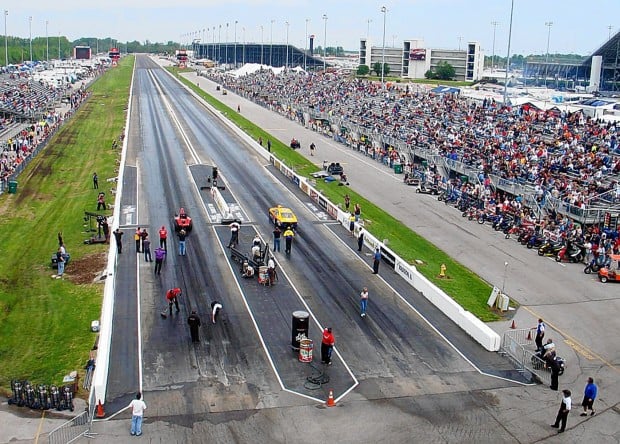 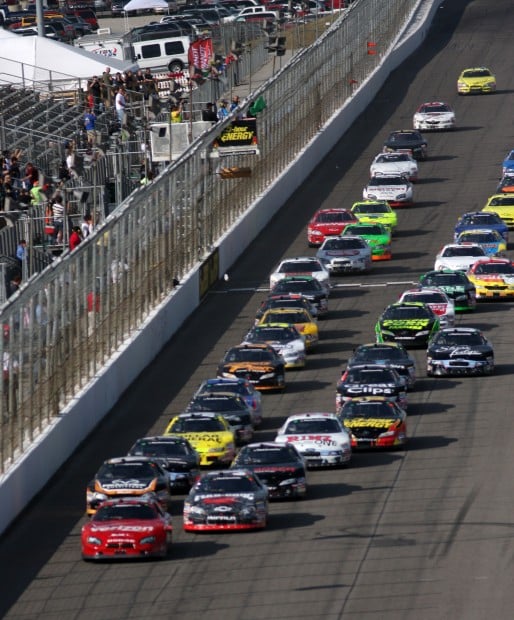 Justin Allgaier jumps to the lead from his pole position as the green flag drops on the final race at Gateway International Raceway NASCAR race. (Stephanie S. Cordle | scordle@post-dispatch.com)
BY KEN ROBERTS • > 314-340-3092

MADISON • Former professional race-car driver and St. Louis area land developer Curtis Francois is part of a group of investors that will lease Gateway International Raceway for one year.

The agreement, which is set to be formally announced today, will allow the Madison facility to come alive again — for at least one year with the return of the National Hot Rod Association.

The NHRA Midwest Nationals will take place on Oct. 5-7, 2012, and will be part of the "Countdown to the Championship." It will be the fourth of the six-race "Countdown," which will crown champions in the four professional categories — Top Fuel, Funny Car, Pro Stock and Pro Stock Motorcycle.

The group might not wait until October 2012, though, to get going — it might try to hold limited racing at Gateway this fall.

"We are currently working with state and local governments to put together a redevelopment plan that will allow us to purchase the facility and lay a firm financial foundation for the track," Francois said. "We've received incredible interest and support from the racing industry, state and local officials, local businesses and racing fans. We are very excited about the jobs this investment can create and the overall economic impact it can have on the region."

He has been a residential and commercial real estate developer since 1998, concentrating primarily on the developments in the Metro East area.

"In order to be a part of the 2012 season, we had to move quickly and negotiate a lease for the facility," Francois said. "We are excited to reach an agreement with the NHRA. This event is very important for the future viability of the track and illustrates the interest the industry has in revitalizing this wonderful entertainment venue. We look forward to a long partnership with the NHRA."

"We never wanted to leave Gateway," Compton said in a phone interview. "We're thrilled to be coming back. St. Louis is a great market. The group has been terrific to work with and they are good for Gateway."

Francois met with Compton and other NHRA officials over the weekend at the just-completed U.S. Nationals in Claremont, Ind. It was there where Francois finalized the return of drag racing to the St. Louis area.

The NHRA did not race at Gateway this season after Dover Motorsports Inc. closed the track in November 2010. Dover had been leasing the track since 1998. In March of this year, the Delaware company terminated its leases with three of the four majority owners.

Dover also owned 18 acres and relinquished that property to the lease owners in March.

What is unclear is whether the NASCAR Nationwide Series will return in 2012, although the prospects don't seem bright. The Nationwide and truck series schedules have not been finalized.

"All NASCAR sanctions are handled on a year-to-year basis and we will continue to evaluate potential race markets for all NASCAR series," a spokesman said.

In 2010, when Dover announced it would not seek 2011 dates for Gateway, NASCAR senior vice president of racing operations Steve O'Donnell said it probably would be hard for Gateway to get back on NASCAR's radar.

"It's fairly challenging to get back on the schedule," he said at the time. "NASCAR is not in the business of pulling dates from someone. So once someone opts out, we fill those venues with what we feel like are going to do a good job and have done a good job. Once that schedule is full, it's quite difficult to get back on there."

Gateway may have racing again by July

Gateway International Raceway, which ceased operations last November, could be back in business by July if negotiations continue moving forwar…

Civil officials are worried since the owner hung a for-sale sign on the 1.25-mile oval, with its hulking grandstands, and cancelled next year's events.

Gateway Raceway will cease all operations

Financial burden has become too much, according to company's chief executive officer.