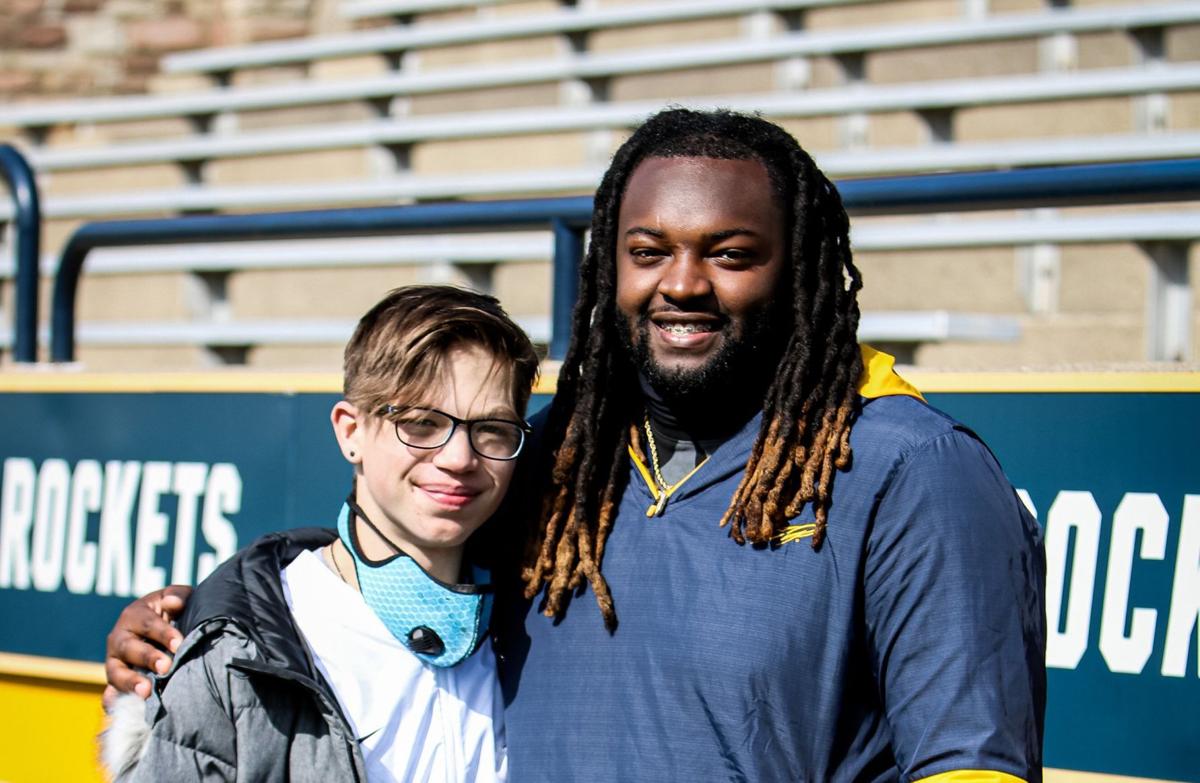 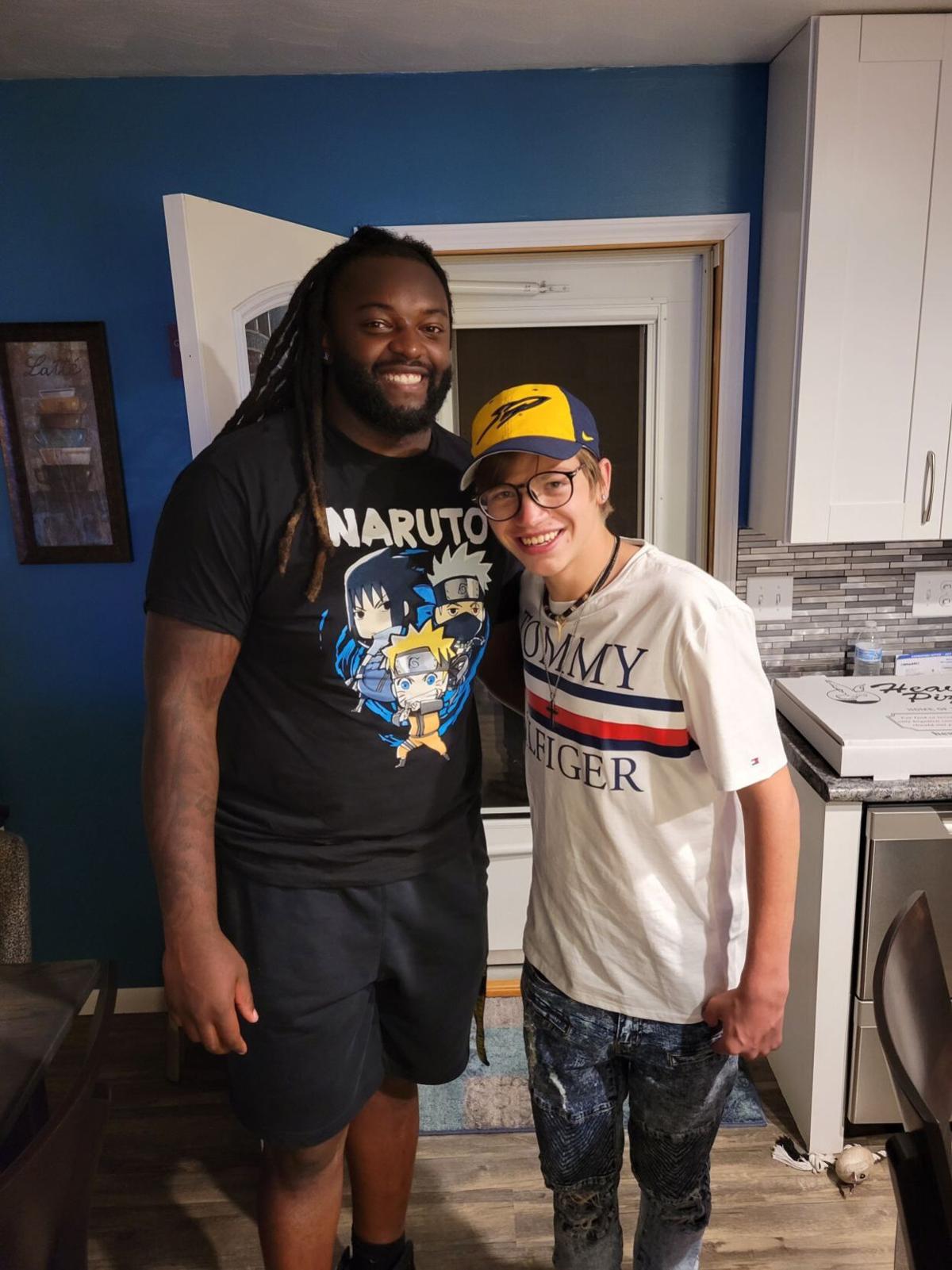 Lavel Dumont, an offensive tackle on the University of Toledo football team, would be driving down North Holland Sylvania Road in Toledo, Ohio, and he kept seeing the same kid, playing football alone in front of his house. It was clear the youngster took his football seriously.

“He wasn’t like a little kid playing,” Dumont said this week. “I could tell he really cared about the game of football, he was working on drills, throwing the ball to himself when no one was there, throwing the ball at objects, like he was really working on something. I said, ‘If I see this kid out here like two more times, I’m going to go up and say something and stop my car, and go have a conversation.’”

Which is what happened. Dumont was driving by, saw 15-year-old Wyntr Knisely, who had recently moved to Toledo and, because of the pandemic, hadn’t made any friends, outside playing football alone. He stopped his car and introduced himself and from that, an unlikely friendship was formed between a high school kid with a congenital heart problem and a college football player that has carried on even though they now live almost a thousand miles apart. They played catch and played Madden on Knisely’s Xbox when both were in Toledo and after the move still talk and text daily.

“It’s definitely crazy that just a game or a ball can bring people together from two different walks of life,” Dumont said.

“It meant a lot,” said Knisely, whose family has since moved to Daphne, Alabama. “We just moved there, I knew some people from school, but we never hanged out much. I met him and it meant a lot. If he was not busy, I could call him, see if he’d want to come over. It meant a lot to me and it still does. I text him every day. … He’s funny, he’s nice, he understands me. His mom and his dad raised him right.”

“I’m a firm believer you meet people for a reason,” said Jenn Lowe, Wyntr’s mother. “I believe Lavel was meant to be in his life at that moment, and the relationship, the bond since then, I would like to think has benefitted both for the better.”

Dumont is one of the recipients of this year’s Musial Awards for sportsmanship, class and character, which will be presented on Saturday at the Stifel Theater downtown. Wayne and Janet Gretzky receive a lifetime achievement award for sportsmanship, and after that, there are seven individual recipients, one team and an entire fan base, that of the Buffalo Bills, being honored.

“I had no recollection how big the award was,” Dumont said. “Once I did some research on Stan Musial and learned all about it, it was a good fit. I’m trying to use my sport how he did, to give back.”

Stopping to say hello with Knisely isn’t out of character for Dumont, who related how earlier this week in Toledo, he was asked for change by a homeless man, and since he didn’t have any money, he instead took the man to get a haircut. Both his parents are teachers, and his mother is a special education teacher in Tampa, Florida, and Dumont has helped with events like the American Cancer Society’s Relay for Life and the Special Olympics.

It turns out Dumont and Knisely had something in common besides a love of football. Both have been diagnosed with ADHD, and Dumont has been able to teach Knisely about living with the condition.

“He was telling us,” Lowe said, “about how when he was younger, he and Wyntr were very similar, with a lot of anger issues, not able to focus, and how sport helped him manage that. I don’t know if he knows this, but he inspired Wyntr and Wyntr now works out every single day. From a parent perspective, I can see a difference. He’s able to manage his emotions since starting to work out. It makes me chuckle. Sharing that experience with Wyntr, he took that and ran with it. It’s been a blessing for me.”

Lowe, needless to say, was not thrilled at first to find her son had exchanged phone numbers with a stranger and vetted him before giving her son permission to contact him. (Dumont also apologized.) But from that, the friendship has only grown. “Football is the one sport he loves above all else,” Lowe said. “It’s also the one sport he can’t play and he lives in a house full of women, so having that male relationship has done quite a bit for him on a couple of levels. As we’ve gotten to know Lavel more, he’s been such a positive influence on Wyntr, dealing with his disability and with his ADHD that I’ve never seen before in Wyntr. The growth that I’ve seen in my son since he met Lavel has been tremendous.”

“He’s taught me more about myself,” Dumont said. “He brings the best out of me. I might not be having best day, mad about my ankle (he recently had surgery on it), he helps me with all that, keeps me positive.

“Use your platform to create bonds, because you never know what somebody might be going through and how you can help them. Don’t be afraid to speak up as well.”

Along with the Gretzkys, National Spelling Bee champ and basketball prodigy Zaila Avant-Garde is getting the Musial Award for extraordinary character. Other Musial awards are going to high jumpers Gianmarco Tamberi and Mutaz Barshim, who agreed at the Tokyo Olympics to share the gold medal rather than go through a tiebreaker; Phillies outfielder Bryce Harper, who reached out to support and encourage Cardinals pitcher Genesis Cabrera after Cabrera had hit Harper in the face with a pitch; Buffalo Bills fans, who donated more than $550,000 to a Baltimore charity after Ravens quarterback Lamar Jackson was injured in a playoff game with the Bills, who won the game and advanced; Rebel Hays, a guide runner for a visually impaired high school cross country runner in Arkansas; Mario Hoefer, an Iowa high school football player who came to the aid of a dehydrated opponent; and the LSU gymnastics team, which “adopted” a UCLA gymnast who otherwise would have been competing alone at the NCAA championships.

College football focus: Mullen out at Florida after losing to Mizzou

Gators have lost five of their last seven games.

Guard is doubtful for the Illini's game Friday night against Rio Grand Valley.

Illini are still playing for a lot in regular-season finale

Beating Northwestern for the first time since 2014 is one goal, possibly getting a bowl game is another one.

KANSAS CITY, Mo. — Cincinnati coach Wes Miller had no idea who he was watching early on against Illinois on Monday night.

"I just wanted to spank you," Koepka says.

Cockburn has career night to lead Illini at home