Become a Member
Read Today's E-edition
Share This
Digest: Hernandez to have his No. 17 retired by Mets this year
0 comments
Share this
1 of 2 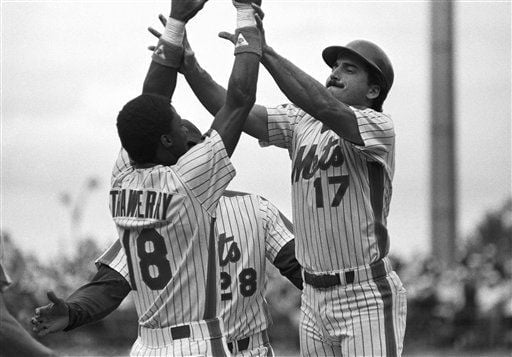 Keith Hernandez will have his No. 17 retired by the New York Mets this summer to honor his seven seasons as a player and nearly three decades as a beloved broadcaster with the baseball franchise.

The Mets announced Tuesday that Hernandez will become the fourth player to have his uniform number retired by the team in a ceremony prior to a game July 9 against Miami.

Hernandez started his career with the Cardinals in 1974 and went into their Hall of Fame last year.

Balkovec first woman manager in MLB minors: Rachel Balkovec became the first woman hired to manage a minor league affiliate of a Major League Baseball team when she was promoted Tuesday by the New York Yankees to dugout boss of the Low A Tampa Tarpons.

The 34-year-old native of Omaha, Nebraska, joined the Yankees organization as a hitting coach in 2019, making her the first woman with that job full-time in affiliated baseball. She got her first position in pro ball with the Cardinals as a minor league strength and conditioning coach in 2012.

Georgia tops final AP Top 25 poll: Georgia is No. 1 in the final Associated Press college football poll of the season after winning its second national title Monday by beating Alabama.

The Bulldogs received all 61 first-place votes.

The Tide finished No. 2, giving the Southeastern Conference the top two teams in the final rankings for the third time since 2011.

Michigan was No. 3, the Wolverines’ best final ranking since winning the national championship in 1997 and their first top-10 finish since 2006.

No. 4 Cincinnati, which became the first team from outside the Power Five conferences to reach the playoff, finished with its best final ranking. So did No. 5 Baylor; the Bears’ previous best finish in the AP poll was No. 7 in 2014.

Reyna, Weah uncertain for US soccer: Midfielder Gio Reyna and forward Tim Weah remain uncertain for the United States’ next three World Cup qualifiers, which start Jan. 27 with a match against El Salvador at Columbus, Ohio.

Reyna has not played in any matches since injuring his right hamstring during the opening qualifier at El Salvador on Sept. 2.

Weah, who scored in the 1-1 draw at Jamaica in a November qualifier, injured a thigh during training with Lille on Dec. 3, two days after his last match. (AP)

Watson gets starter honor at Masters: Six years after Tom Watson played the Masters for the 43rd time, the two-time champion returns in April to hit the ceremonial tee shot alongside Jack Nicklaus and Gary Player.

Shiffrin wins World Cup slalom race: Mikaela Shiffrin impressed with a come-from-behind win in a night race Tuesday to send a strong signal to her Slovakian rival Petra Vlhova in the last women’s World Cup slalom before the Beijing Olympics.

Racing on the challenging Planai course in Schladming, Austria, the American improved from fifth place, posting the fastest time with an all-attacking run to beat first-run leader Vlhova by 0.15 seconds.

Vlhova has been dominating women’s slalom this season, winning five of the seven races and locking up the season title with two races to spare. (AP)

Lendore, a volunteer assistant coach at Texas A&M, died Monday after his car drifted across the center line, sideswiped a vehicle and then collided with a sport-utility vehicle, said Sgt. Bryan Washko, a Texas Department of Public Safety spokesman. Texas A&M coach Pat Henry said Lendore was driving home from practice in College Station, Texas, when the crash happened.

Lendore died at the scene. The driver of the SUV, a 65-year-old woman, was taken to a hospital with serious injuries, DPS said. The driver of the vehicle sideswiped by Lendore before the collision was not injured. The cause of the crash was under investigation Tuesday.

Hardy’s toughest battles are not on the court. ‘I have to choose to put my best foot forward and attack it with a positive mentality,’ he says.

Illini set to get test from high-scoring Purdue

The Illini have won 11 of heir last 12 and are one of the hottest teams in the nation.

Curbelo fitting back in with No. 17 Illini

Point guard returned on Monday in loss to Purdue.

Will use extra year of eligibility to lead Bulldogs' national title defense.

She was drafted by an NBA team, scored first points in sport at Olympics.