It's in the bag: Brighton, Ill., man is the king of cornhole
0 comments
Share this
Subscribe for $3 for 3 months
1 of 4 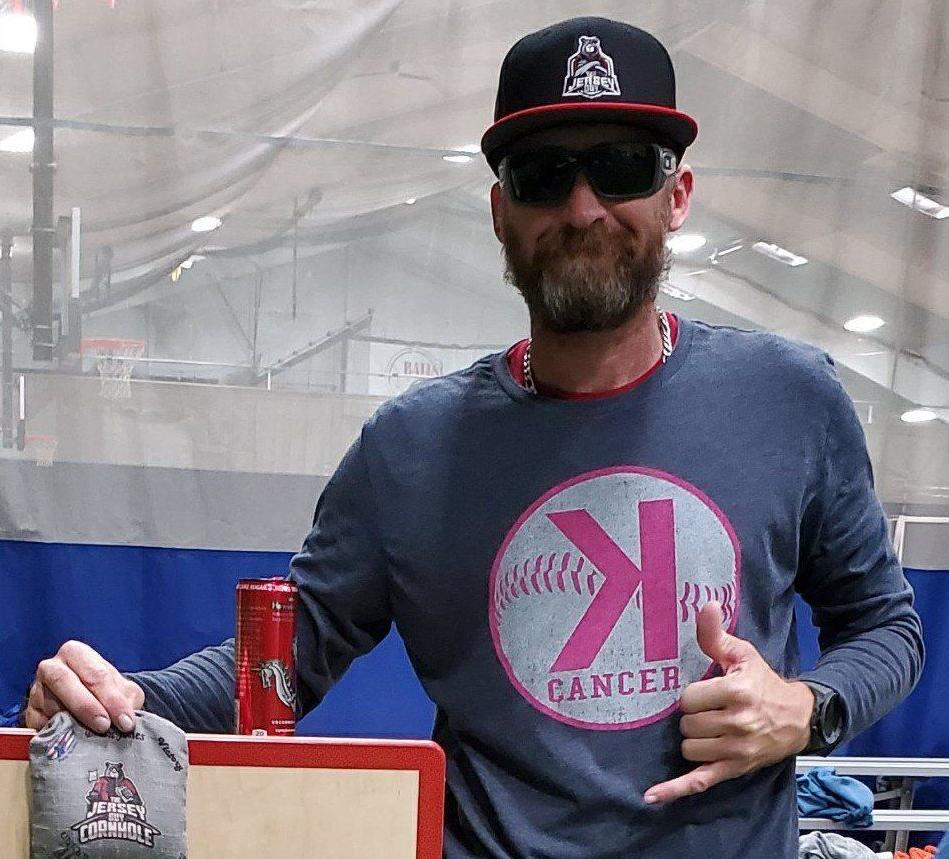 Brian Jones of Brighton, Ill., has been ranked as high as No. 4 in the nation. Photo courtesy Brian Jones 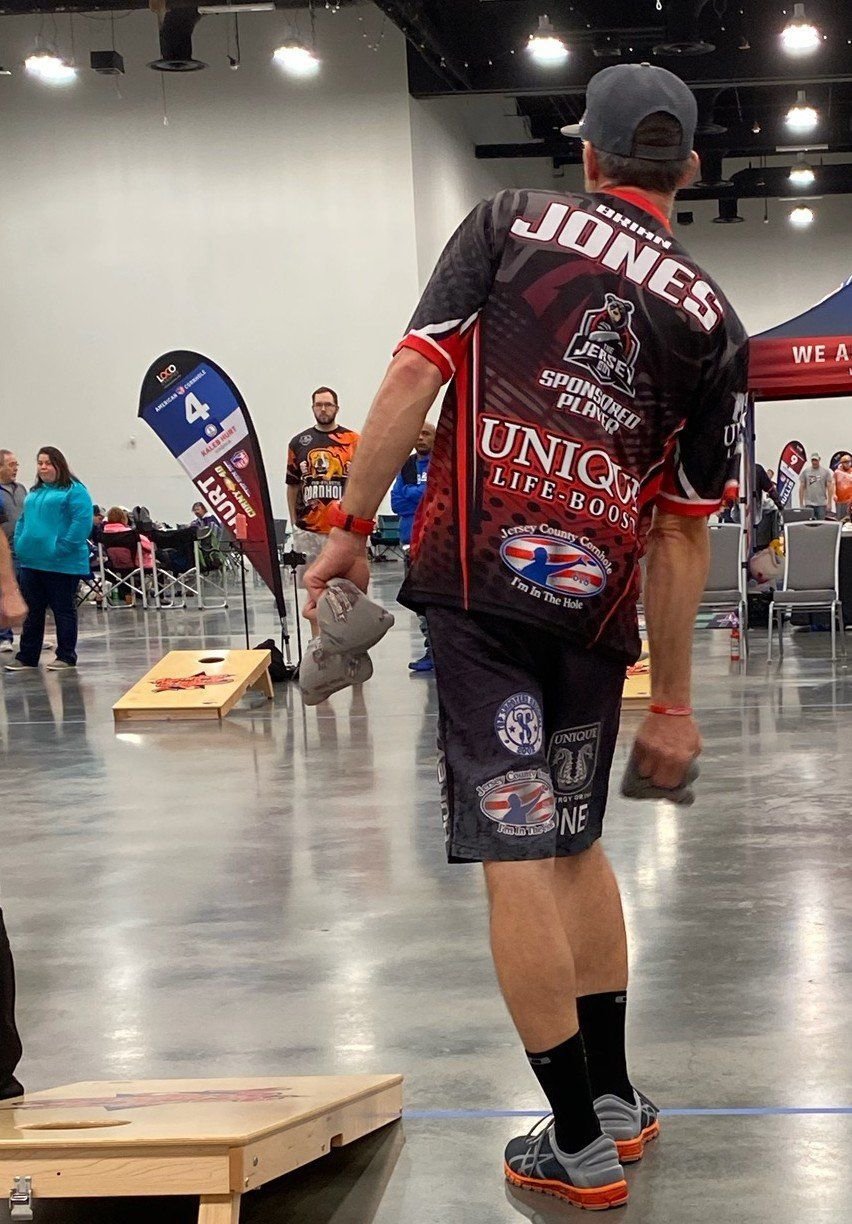 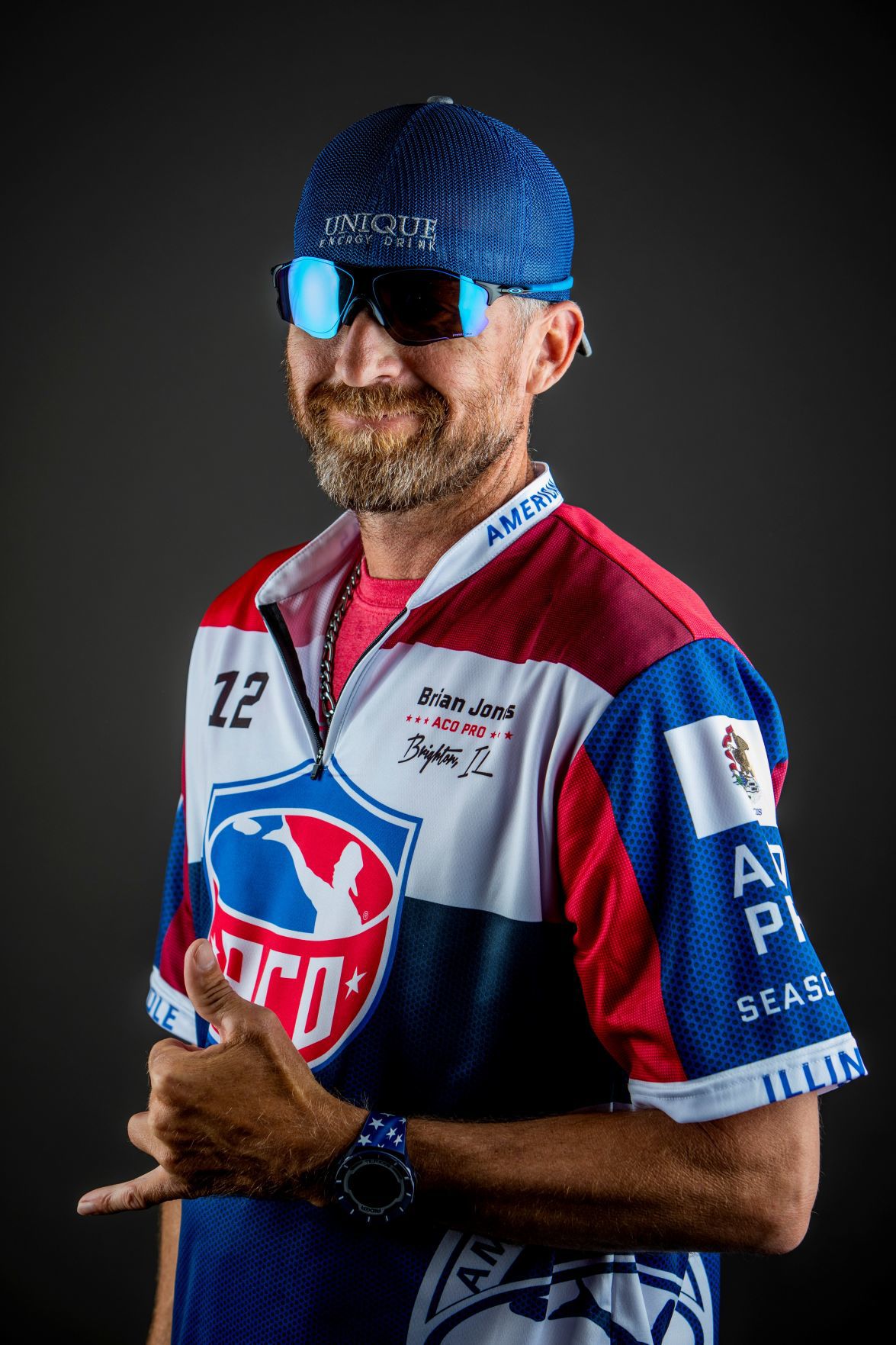 Part of the “Best of St. Louis” series, featuring the region’s top performers in Olympic and recreational sports.

Like everyone else in cornhole, Brian Jones says, it began in the backyard.

Jones, from Brighton, Ill., was at a barbecue at a friend’s house and somebody had brought a cornhole game and it was love at first toss.

“I wouldn’t say I was good at it right away, but for never doing it before, I would say I was fairly decent, one of the best at the party,” he said.

He went home, made his own set of boards and now, nine years and thousands of hours of practice later, Jones, 43, is one of the best at throwing the bags, being ranked 12th in the nation in 2018-19 after being fourth in the nation (and, by extension, the world since it’s a predominantly American game) in 2017-18. He’s won five major championships, more regional titles and who knows how many local events.

Cornhole, for those who don’t frequent backyard social gatherings or tailgate parties, is sort of like horseshoes, only without the heavy lifting and with far less a risk of hurting someone with a bad throw. From 27 feet away, competitors throw sacks, originally filled with seed corn, hence the name, or plastic pellets, at a sloped board with a hole in it. The idea, as you may have guessed, is to get the bag in the hole. Points are scored accordingly. It is a game so simple so as not to require judges or officials.

It also doesn’t require great feats of stamina, which is why you’re like to find a cornhole set at barbecues, in the frontyard or backyard, in football stadium parking lots, or anywhere people congregate. It is about as inclusive a sport as you can get.

“As far as being athletic and staying healthy, that’s not a worry,” said Jones, who is listed as 6-2, 165, which means he’s in pretty good shape. “Cornhole is a sport you play for a very, very long time. It doesn’t matter if you’re 10 or 80, a guy or a girl. I’m not being mean, but you can be a bigger person. You don’t have to be athletic to be good. A small percentage of people make it to pro baseball or pro football. The opportunity is greater to become professional in cornhole, but you have to earn it.”

Jones has earned it. If you think you’ve played a lot of cornhole over the years, you probably haven’t played as much as Jones has. After getting turned on to the sport, he went home, took some scrap wood and built the necessary components and set it up in his garage, which is now a fulltime cornhole arena.

“When I first started doing it,” he said, “I would put in some nights three hours a night, pretty much five, six days a week. Now, if I can practice 30 minutes a day, that’s about what I do now. If I’ve got a buddy over, we might play for a couple hours. When I’m just by myself, I’m going through shots for 30, 45 minutes, three days a week. I go out in the garage, crank up the radio and practice away. It’s a lot of walking. Good exercise.”

Jones had been a volleyball player earlier in life but when he discovered cornhole, he gave up volleyball, earning the eternal thanks of his knees. “If I played in a volleyball tournament, it would take four or five days to recover,” he said. “In cornhole, there’s no running, no jumping. There’s no recovery time.”

Which leads to the question, are there any similarities between the high energy of volleyball, with its leaping and diving, and the low energy of cornhole? Jones ponders for a moment.

“Nerves,” he says. “Myself I don’t drink, but cornhole is a drinking game. Even at the pro level, there’s people who have to be drinking to be able to play. They can’t calm their nerves if not. Myself, I played sports forever. It’s just another thing. I don’t get nervous, I don’t let it get to my head. A lot of cornhole is mental. We’re only human. You’re not going to throw a six-inch square bag 30 feet into a round hole every single time. Michael Jordan didn’t make every shot he took.” (Jones says that out of the four bags he’ll throw in one inning of cornhole, he’ll usually make three or four. He once made 30 in a row.)

Jones considers himself a professional cornhole player, even if he doesn’t earn a living from it. (First prize at many tournaments runs a couple thousand dollars at most.) But he travels to tournaments, has sponsors, and there’s even a Brian Jones set of cornhole bags you can buy, made to his specifications. (It’s a stiff, slower, control bag, because Jones throws a low, hard shot and a fast bag could go flying off into oblivion when it hits the board.) He is the commissioner for the Midwest Conference of the American Cornhole Organization (one of two national cornhole associations), runs Jersey County Cornhole, helps organize ex-Cardinal Jason Motte’s annual cornhole tournament and is an evangelist for the sport. He’s also a union construction worker, which is actually what he spends most of his time doing.

Cornhole, owing to a structure that allows for easy social distancing and which seldom draws a crowd anyway, was one of the first sports to get back up and running, and logged some early air time on ESPN because of it. Jones will be competing at a local event this Saturday at the Angry Beaver in Soulard, and then after that will be heading to a tournament in South Carolina.

In local cornhole circles, Jones is a big deal. He once dropped in on an event he saw mentioned on Facebook in Dardenne Prairie and the people involved, “they were flipping out, they thought it was so cool I’d come over here to visit.” But the feeling is mutual.

“The cornhole community in St. Louis is awesome,” he said. “It’s one big family. We look out for each other. If someone is struggling, we bond together in time of need. That’s the coolest thing out of it, the people you meet, the friends you make.”

Crimson Tide will be coming to Columbia for game.

BattleHawks were one of the league's big success stories.

The conference's university presidents canceled all fall sports — including soccer and volleyball — and said they would explore making them up in the spring season.

Digest: No fans for Indy 500 this year after all

Also, NCAA to let each division decide its championships this fall.

Brian Jones of Brighton, Ill., has been ranked as high as No. 4 in the nation. Photo courtesy Brian Jones