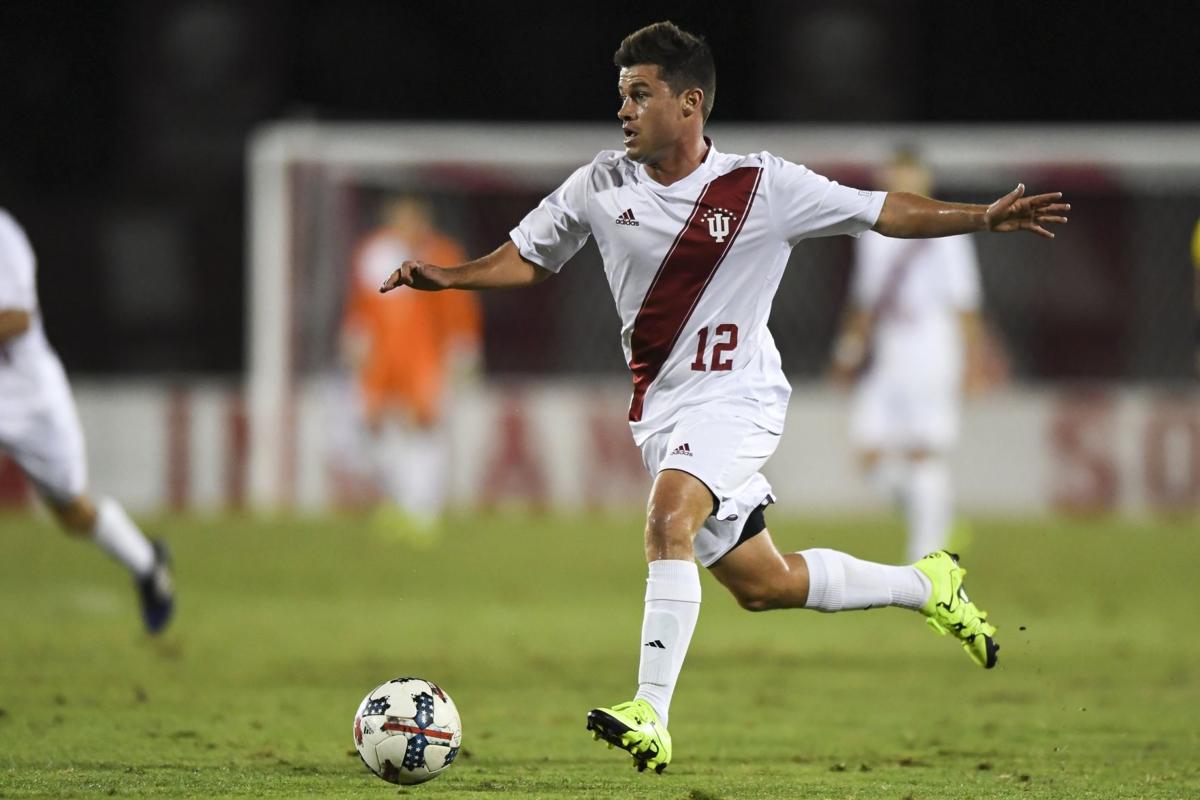 Austin Panchot of Indiana is seen during the game against The Ohio State Buckeyes and the Indiana Hoosiers at Memorial Stadium in Bloomington, IN. Photo By John Sims/Indiana Athletics 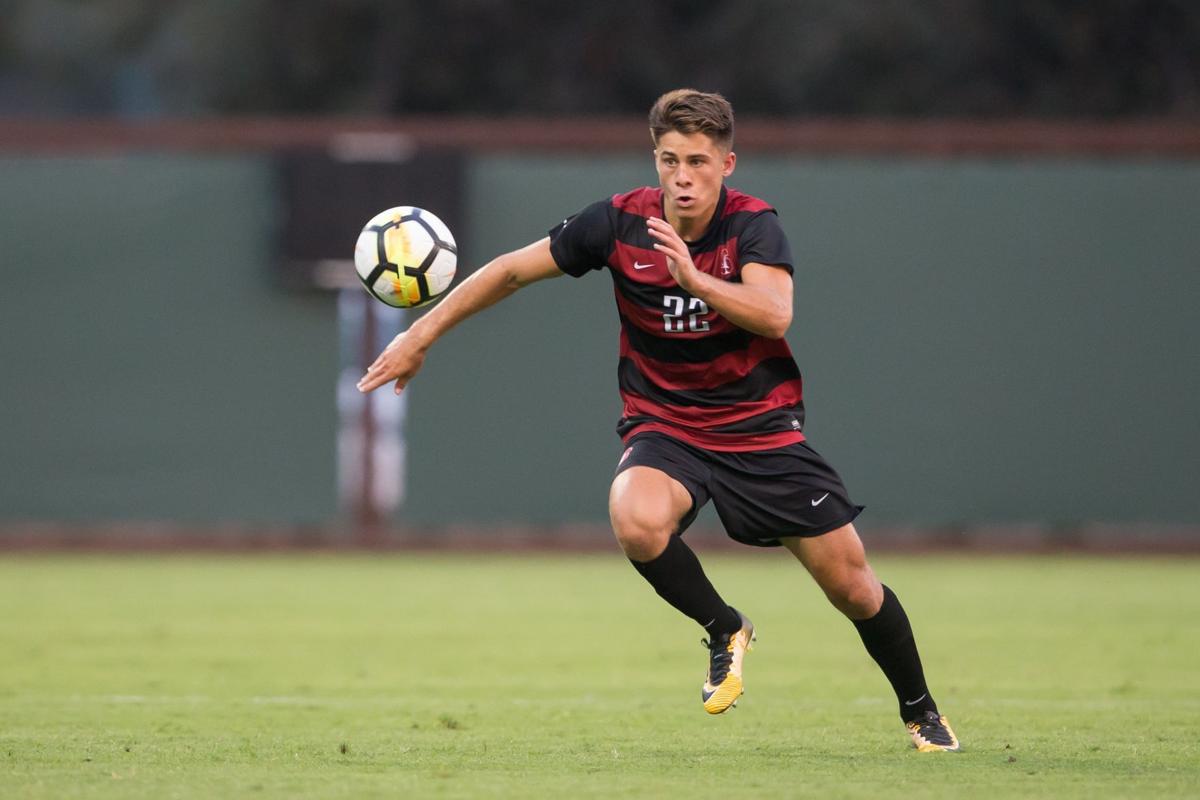 Pam and Jeff Panchot have a game plan for the NCAA men’s soccer semifinals Friday evening in Philadelphia.

“We’ll wear our Stanford gear for the first game and switch to our Indiana stuff between games,” Jeff said. “It’s a unique situation, but one we’re all pretty excited about.”

The Panchots’ middle son, Austin, is a junior attacking midfielder for Indiana University while their youngest, Logan, is a freshman starting at right back for Stanford.

And what will the Panchots do if both the Hoosiers and Cardinal move on to meet for the title on Sunday?

“We’re sitting at the 50-yard line and we’re neutral, like Switzerland,” Pam joked.

For the brothers, who graduated from Lafayette High and communicate with each other almost daily, just getting to Sunday’s final is the focus.

“Playing for a national title is something we’ve both dreamed of, so getting the chance to play each other for that title, that would be crazy,” 21-year-old Austin said. “First, we have to get there.”

Logan, 19, agreed, “Both teams have some work to do Friday. Then we can start thinking about Sunday.”

“When we first saw the bracket and realized the only way Indiana and Stanford would meet was for the title, we figured there was no way,” said Jeff Panchot, who starred at Lindbergh High and went on to play a year of professional soccer in Germany. “At this level, with all the great programs out there, there’s a fine line between winning losing.

“Either way, it should be an exciting weekend.”

In a rematch of last year’s title match — won by Stanford in penalty kicks — the Cardinal posted a 2-0 win over No. 1-ranked Wake Forest in Salem, N.C., last weekend to earn a spot in Philadelphia.

Earning its NCAA-record 19th trip to the College Cup, eight-time champion Indiana secured its semifinal berth by eliminating Big Ten rival Michigan State in a penalty-kick shootout. The Spartans scored less than two minutes into the match, marking the first time the Hoosiers had trailed in 2017.

But Indiana tied it 15 minutes into the second half and went on to outscore Michigan State 3-2 in penalties as freshman keeper Trey Muse turned away three shootout attempts.

Austin Panchot converted on his PK attempt for the Hoosiers.

“We’ve really struggled in PKs since I got here, so that night was huge for us,” he said.

Austin Panchot played alongside older brother Jean-Luc as a freshman at Lafayette High, leading the team with 23 goals and 12 assists to earn third-team honors on the Post-Dispatch All-Metro squad in 2012.

From there, however, his focus was with the St. Louis Scott Gallagher Academy program.

“I enjoyed playing high school soccer, and getting a chance to play with my brother is something I’ll never forget,” he said. “But for as long as I can remember my goal has been to play professionally and to do that, I knew I had to train with and compete against the best available players. And the Academy program at St. Louis Scott Gallagher gave me that opportunity.

“It wasn’t an easy decision, but it was the right choice for me at that point in my career.”

And the decision has paid dividends, on and off the soccer field.

“I’m playing soccer in a program with an incredible tradition, and I’m also working toward a degree in one of the top business schools in the nation,” said Logan, who graduated from Lafayette a semester early so that he could get a jump-start at IU.

Austin, who has four goals and four assists, has played in all 23 games this season. He came off the bench early but has been a starter in the Hoosiers’ last 13 matches.

Logan Panchot grew up playing in the SLSG system and spent most of his high school years as a member of the U.S. Soccer Under-17 Residency Program in Bradenton, Fla. He’s been involved in the U.S. Soccer system since 2011 and graduated from Lafayette last spring.

“Being involved in the Academy program helped me get the exposure I needed to pursue my goals, on and off the field,” he said. “I couldn’t be happier with my choice. I love it out here; the school’s incredible and I feel fortunate to be part of one of the top soccer programs in the nation.

“Coming in, I wasn’t real sure what to expect, but everybody here accepted me right away. There’s a special feeling on this team; these guys know what it takes to win at this level, and I enjoy being part of that.”

Logan has started all 21 games this season for the Cardinal, focusing on defense while chipping in with two goals and an assist.

Austin and Logan have played on the same team many times and recall just one game as opponents.

“Our Gallagher Academy teams played when we were young,” Austin said. “We were the older group, we were expected to win and we did.”

Logan added: “They won, but we definitely pushed them.”

Unofficially, the Panchot brothers have competed against each other for years.

“I think our gutters still have the dents to prove it,” Jeff kidded.

Pam added: “They were out in the yard every day. At one point, I remember Jeff reminding me that we were raising boys, not bushes.”

U.S. women's soccer team has a shot at history, but those on the squad just want to win

Ladue's Sauerbrunn, the U.S. captain, says, "We just want to win everything and in doing that, we think we’re going to make history."

Soccer player collapsed during Euro game, 'was gone' before being resuscitated

Christian Ericksen was in stable condition at a Copenhagen hospital and had spoken to teammates via video link on Sunday, team officials said.

St. Louis City SC has taken advantage of the pushback of its MLS starting date

Team was supposed to begin play in 2022, but the league moved it back because of COVID — meaning its stadium will be ready for club's first opening day.

DENVER — Christian Pulisic lifted a trophy for the second time in eight days, this time his first for the United States.

The Women’s Premier Soccer League kicks off for area squads Fire & Ice and the Tony Glavin Soccer Club this weekend.

MLS may beckon, but St. Louisan Ream is enjoying the competition in England

Former St. Louis University standout is with the U.S. national team now for the final rounds of the CONCCAF Nations League.

HOUSTON — Carli Lloyd scored 24 seconds into the game and the U.S. women’s national team went on to defeat Jamaica 4-0 on Sunday night in the …

Oregon State forward Amanda was born in a refugee camp in Tanzania and is the top men's college player.

Austin Panchot of Indiana is seen during the game against The Ohio State Buckeyes and the Indiana Hoosiers at Memorial Stadium in Bloomington, IN. Photo By John Sims/Indiana Athletics