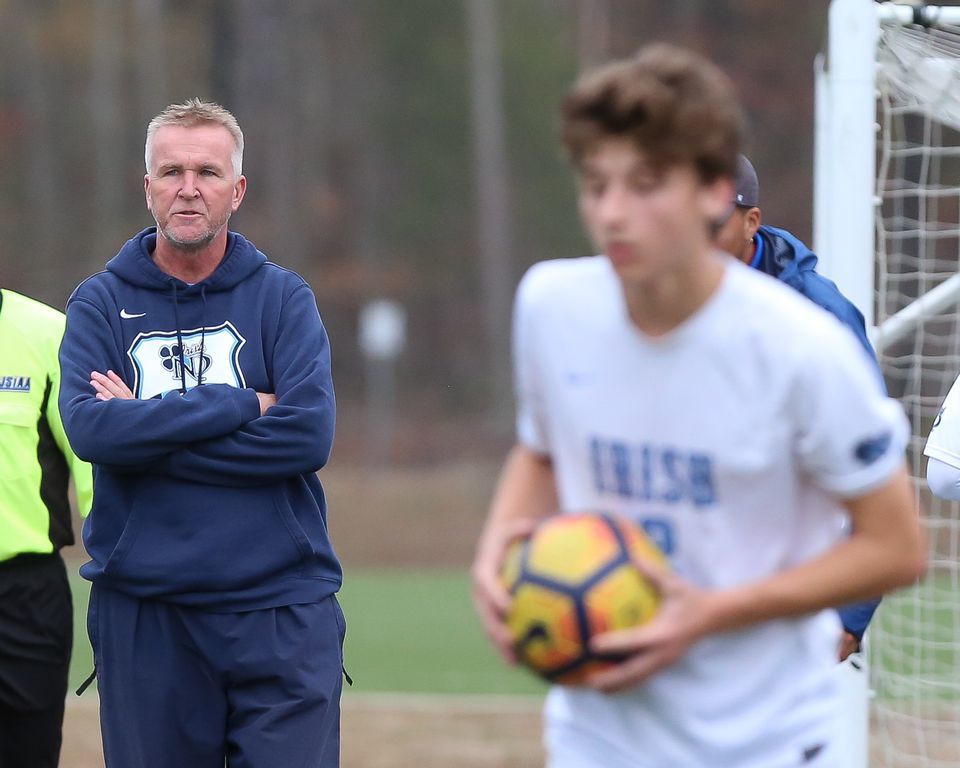 Notre Dame's Head Coach Dan Donigan watches his team from the sidelines against CBA during the boys soccer NJSIAA South, Non-Public A semifinal at Capelli Sports Complex on 11/5/19 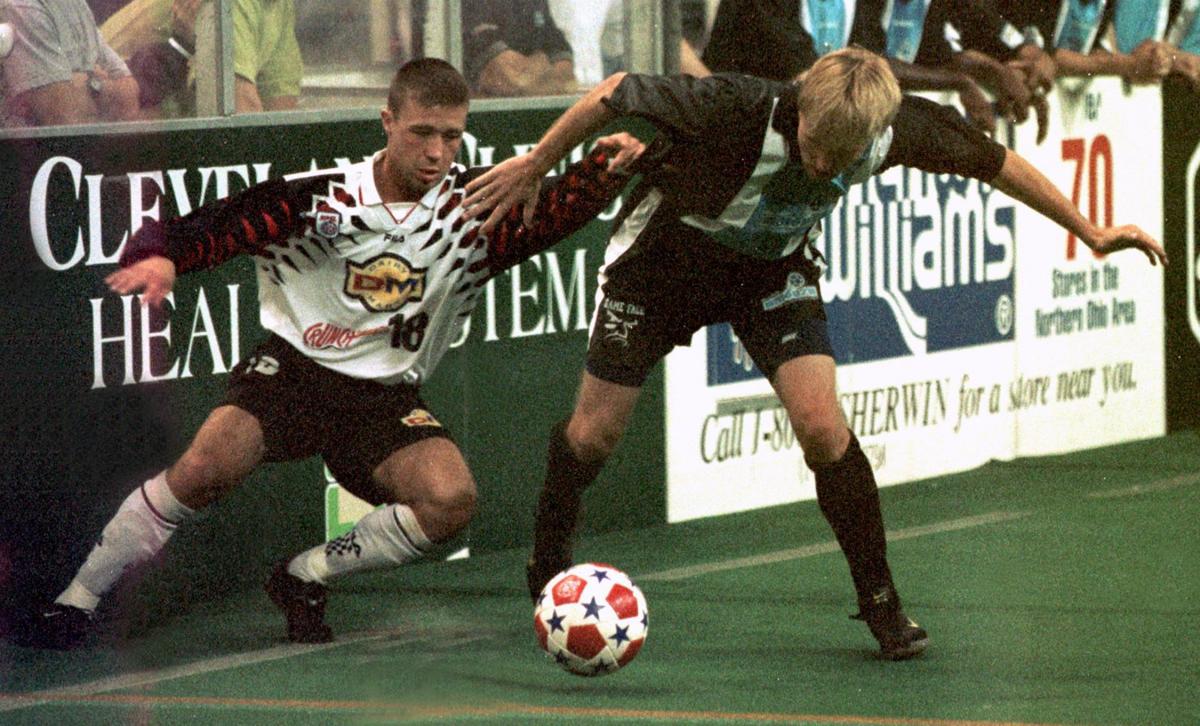 The St.Louis Ambush's Dan Donigan(R) gains control of the ball from the Cleveland Crunch's Chad James(L) during Game 5 of the NPSL Championships at the CSU Convocation Center in Cleveland Friday May 14, 1999.(AP Photo/Ron Schwane) 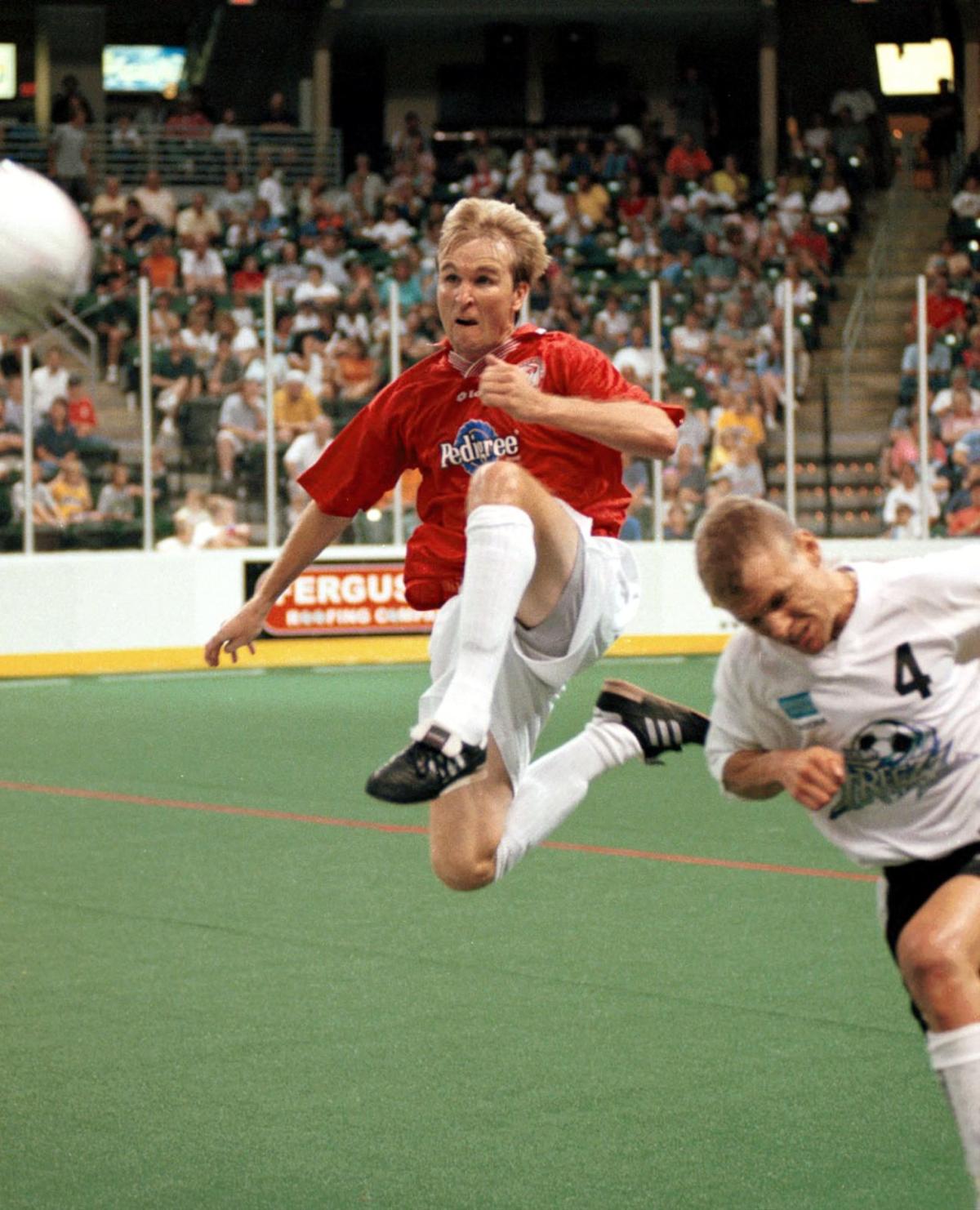 St. Louis Steamers forward Dan Donigan leaps for the ball in front of Utah's Craig Rhodis in a game at Family Arena during the 2000 season. (Photo by Don Adams Jr.)

When he was last seen in St. Louis, Dan Donigan was heading home, leaving his position as head soccer coach at St. Louis University after nine seasons and seven NCAA berths to take the job at Rutgers, near where he grew up in New Jersey.

St. Louis had become like a second home to Donigan: he was a player and a coach here for 15 years, he met his wife here, got a masters degree in education here, had his first child here. But SLU wouldn’t give Donigan (or most of the other non-basketball coaches) a multi-year contract and Rutgers would, so he went for the stability and went home.

And now he’s leaving New Jersey and coming back to St. Louis. Apparently you can go home again.

Donigan will be starting in a few weeks with Sporting STL, the soccer club based at SportPort in Maryland Heights. There, he’ll oversee all aspects of the club’s many teams, boys and girls, from youngsters up to high schoolers. His hiring comes not long after one of his players at SLU, Brad Davis, was hired for the same job with the Scott Gallagher club as local clubs seem to be stocking up with well-known names in St. Louis soccer. (Sporting STL has also hired Mike Ambersley, the De Smet grad who had a long professional career, to work in youth development.) Apparently you can go home again, even if it’s to someplace else.

“St. Louis is like my second home in a lot of ways,” Donigan said by phone from New Jersey, where he was packing up his house to move to a home here he’s only seen online. “A lot of my life goes back to St. Louis and New Jersey. I’m very privileged to have those two places as my hometown and both happen to be incredible soccer hotbeds. … If presented with this job offer in Dallas or Seattle or Orlando, I would not have taken it. When we were presented in St. Louis, I said we’re going.”

Donigan’s enthusiasm for the job is apparent. There’s no slowing him down on the phone, and his new colleagues at Sporting STL have found the same thing. “He’s eager, he’s doing stuff every day for us,” said Sporting STL president Jeff Stevens, “helping as much as he can from afar. He’s jumping on Zoom calls with families, teams, reaching out. He wants to be here physically. That’s why he’s such a great addition to the Sporting family right now. Our coaches, everybody will reap benefits. It’s why we add a person like that.”

Donigan left SLU after the 2009 season when Rutgers offered him a three-year deal. Ultimately, though, he didn’t find happiness in the Garden State, and he couldn’t match the success he had at SLU. He had a 55-95-16 record in nine seasons, going to the NCAAs twice, as the Scarlet Knights moved into the Big Ten. After his second straight 4-13-1 season, he was fired in 2018. Donigan had one year to go on his Rutgers contract at the time, and he spent that season coaching Notre Dame High in Lawrenceville, N.J., which improved to 17-4 in Donigan’s one season there, and running a club there, PDA Hibernians.

“A lot of my job was putting out fires,” he said, “managing people and doing things other than being on the field. Any college coach will tell, coaching is the least amount of responsibility in the job and that sucks. Unfortunately, I want to dance lightly around this, it wasn’t working for me at Rutgers, it wasn’t right, it didn’t feel right. I hated going to work. I wasn’t happy. I knew I wasn’t providing everything I could to the team and the school because I didn’t want to be there. I didn’t like a lot of things about it. I didn’t like anything about it. I needed to go. We mutually agreed to part ways, I sat in the ADs office for two minutes and told him he was making a fine decision. I couldn’t get out of there fast enough. I don’t regret coming back (to New Jersey), but I’m that much more excited coming back to St. Louis. I think I bring a lot of stuff to the table.”

He brings more than 20 years, including his time as an assistant, as a college coach, and 11 years as a player, mostly indoors during some of the tougher days from the sport in America, including stints with the Storm, Ambush and Steamers locally. After his time at Rutgers, Donigan says that he may not be getting any more college job offers anyway.

“Life isn’t fair all the time,” he said. “Hard work doesn’t always guarantee you anything. You have to be prepared for the next step in life. It might be backward or forward but you have to be happy in what you choose. I do not regret coming to New Jersey. At the end of the day, it led to a great opportunity. There are people out there that still value me and my wife. If there’s anything that I learned, it’s keep your head down and don’t burn bridges.

“I want to give back to the city and there’s no better way than in the youth game. I know it’s crazy. I’ve got my philosophy. We want to build a good family culture and develop players and teams to get on to the next level. I don’t want to steal kids, poach them from other clubs. I know that goes on. Especially in a city like St. Louis, with so many good kids and coaches, I want to let people see who we are, what we do. If that attracts them, great.”

Donigan’s plan is to be on the field with players and coaches as much as he can, teaching soccer.

“It’s an unbelievable opportunity,” he said. “Things got difficult for me. I’m not shy, I’m not embarrassed to say it was not a good fit at Rutgers. I don’t want to be in college soccer again. I’ll probably never get another offer for a college job. I’ve found my niche.”

Former SLU standout Maddie Pokorny is 'working my butt off' to honor her hospitalized father, who suffered a stroke that led to a bicycle accident.

Notre Dame's Head Coach Dan Donigan watches his team from the sidelines against CBA during the boys soccer NJSIAA South, Non-Public A semifinal at Capelli Sports Complex on 11/5/19

The St.Louis Ambush's Dan Donigan(R) gains control of the ball from the Cleveland Crunch's Chad James(L) during Game 5 of the NPSL Championships at the CSU Convocation Center in Cleveland Friday May 14, 1999.(AP Photo/Ron Schwane)

St. Louis Steamers forward Dan Donigan leaps for the ball in front of Utah's Craig Rhodis in a game at Family Arena during the 2000 season. (Photo by Don Adams Jr.)