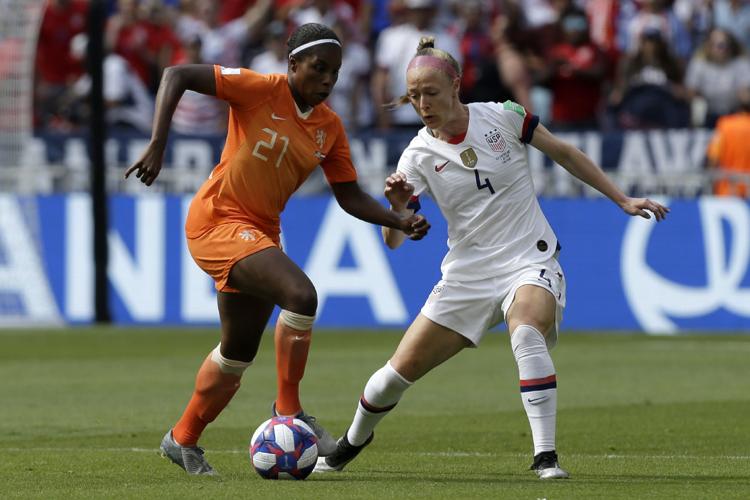 Netherlands' Lineth Beerensteyn, left, dribbles near the United States' Becky Sauerbrunn during the Women's World Cup final soccer match between US and The Netherlands at the Stade de Lyon in Decines, outside Lyon, France, Sunday, July 7, 2019. (AP Photo/Claude Paris) 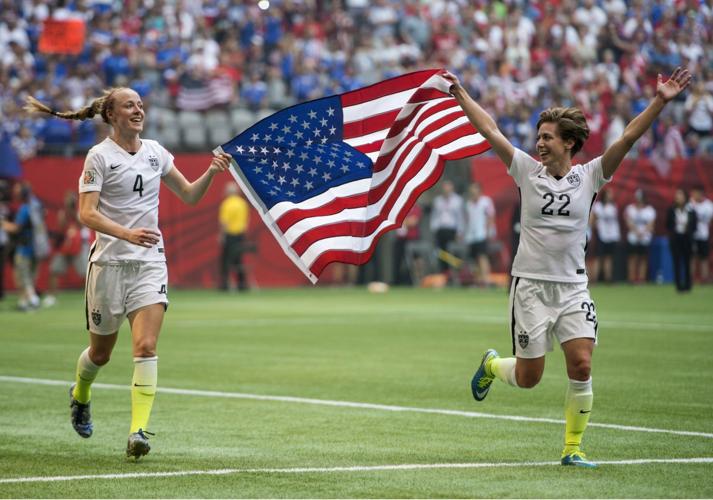 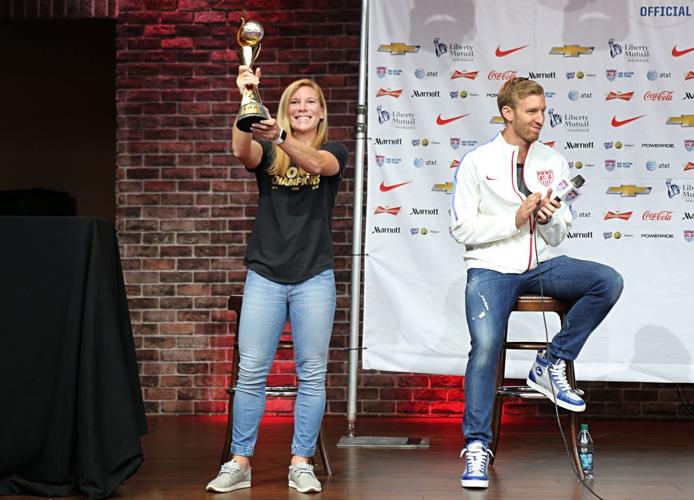 Lori Chalupny remembers when the quest for equal pay in women’s soccer began, seven years ago.

“It was back in 2015, and we were sitting in a room and there were some loud voices saying, ‘This is not right; we need to fight this fight,” said Chalupny, who went from the JB Marine soccer club and Nerinx Hall High School to college soccer at North Carolina and 106 appearances with the U.S. women’s national team. “It was tough at the time because you want to be grateful for what you have. ‘Hey, we get to play soccer and make a living.’

“I remember at the time being conflicted. As a female athlete, you feel pretty lucky, but it took a flip of a switch: Why as women do we get paid less? Why, the most successful women’s soccer team in the world, are we treated as less? All of a sudden, it was: Wow, this is not for us. The fight is bigger than the women’s national team, it’s broader across society of women needing to step up and fight for themselves and know your worth.”

That journey came to an end on Wednesday when U.S. Soccer announced new collective bargaining agreements with the players associations representing both the men’s and women’s national teams that will pay them equally and treat them equally over the course of the contract, which covers the next two World Cup cycles, starting with the men’s tournament later this year. Though the prize money offered by FIFA, the international governing body for soccer, is higher for men than for women, money earned by U.S. teams will be pooled and then divided equally between the men’s and women’s players. The United States is the first federation to split the bonus money evenly between its men and women players.

“The accomplishments in this CBA are a testament to the incredible efforts of WNT players on and off the field,” said Becky Sauerbrunn of Ladue, the captain of the U.S. team and the president of the women’s team’s players association. “The gains we have been able to achieve are both because of the strong foundation laid by the generations of WNT players that came before the current team and through our union’s recent collaboration with our counterparts at the (men’s team’s players association) and leadership at U.S. Soccer. We hope that this agreement and its historic achievements in not only providing for equal pay but also in improving the training and playing environment for national team players will similarly serve as the foundation for continued growth of women’s soccer both in the United States and abroad.”

“It’s awesome,” said Chalupny, who retired from the national team in 2015 after winning a Women’s World Cup championship and an Olympic gold medal. “It’s been a long time coming, a lot of work has gone into this, a lot of meetings. It’s a huge day. It’s a win for everybody involved, for the women’s national team, the men’s national team, U.S. Soccer. We’ve finally reached a point of equality, and I think that’s something that can be celebrated by everybody.”

“This is a historic moment,” said Cindy Parlow Cone, president of U.S. Soccer and a former national team player, “that hopefully will lead to meaningful changes and progress, not only here at home but around the world and not only impact soccer but sport in general as well as society. I’m really proud of what we’ve achieved together.”

The road to this point was bumpy, and rose from the women’s team players, who have been vastly more successful on the international stage, with four Women’s World Cup titles and four Olympic championships, being paid less than the men’s team, which hasn’t gotten past the quarterfinal round of the World Cup since 1930. Much of that stemmed from the men’s World Cup generating far more money than the women’s tournament, which led to much larger bonuses given to each participating nation in the men’s event. The bonus pool for the 2019 Women’s World Cup was $30 million, with the champion U.S. team getting $4 million. For the 2018 men’s tournament, the bonus pool was $400 million, with $38 million going to the champion French team.

But there were also gaps in other things not related to the World Cup, such as men’s teams flying on charters, while women’s teams often flew commercial. All aspects are now equal. Sauerbrunn was part of a group of players that twice sued the federation over the unequal treatment. The most recent suit was settled in February, with U.S. Soccer paying the players $24 million, contingent on a new CBA being reached.

“It wasn’t just the pay structure,” said Chalupny. “The pay structure was vastly different. It’s hard to compare apples to oranges. The easy thing to compare was travel arrangements, charter flights vs. business class vs. first class. You can look at simple things: When we played games, we didn’t get a share of ticket revenue and the men did. It doesn’t make sense. Now the CBAs are basically identical and it’s equal, which is what everyone wanted.”

To make the agreement happen, it required the men’s association to give up some of their bonus money.

“When we got together as a group,” said Walker Zimmerman, a member of the men’s team’s players association leadership group, “we saw that there was not going to be a way forward without equalization of the World Cup prize money. We looked at the numbers between the previous CBA and the CBA we’ve agreed to now and recognized sure, there was a potential chance of making less money, no doubt about it, but we believed so much in the women’s team and believed in the premise of equal pay and ultimately that was a big driving force for us, to do something no other team had done before and to really try and do this together. Difficult conversations, a lot of listening, a lot of learning, and ultimately we came to this historic CBA and we’re really proud of it and we’ll be each other’s biggest cheerleaders for sure.”

“This doesn’t happen without the men’s team championing it,” said Parlow Cone. “It’s not easy to give up the money they’re giving up but to know it’s the right thing to do and step up and do it, I think they should be applauded.”

The men’s team has been without a contract for 3½ years, while the women’s contract ran out in March, which gave U.S. Soccer the rare chance to negotiate contracts together, rather than having one trying to match the other. Now the sides have a deal that runs through 2028.

“It’s about women fighting for equality,” said Chalupny, “whether in women’s soccer, or any other business across the United States. Equality is something that is not controversial. Everyone agrees equality is the way we should be moving forward in this country.”

Green light: St. Louis City SC wants a field that will wow from the start

St. Louis' MLS expansion team has brought in Mizzou's former field general to give the team the perfect playing surface

72 years ago a bunch of St. Louis kids helped to pull off soccer's 'Miracle on Grass'

St. Louis City completes the ‘spine’ of its team with German midfielder Lowen

City2 struggles, but still comes away with 2-0 win over Real Monarchs

The MLS expansion club St. Louis City SC will have its under-17 and under-16 teams playing in the MLS Next championship tournament starting this weekend in Texas

St. Louis native takes reins of US under-15 soccer team

Heinemann attended CBC, where he competed in soccer and basketball.

Megan Rapinoe would have liked to talk about soccer on Friday.

Althoff High grad is still youngest player on the team.

Netherlands' Lineth Beerensteyn, left, dribbles near the United States' Becky Sauerbrunn during the Women's World Cup final soccer match between US and The Netherlands at the Stade de Lyon in Decines, outside Lyon, France, Sunday, July 7, 2019. (AP Photo/Claude Paris)