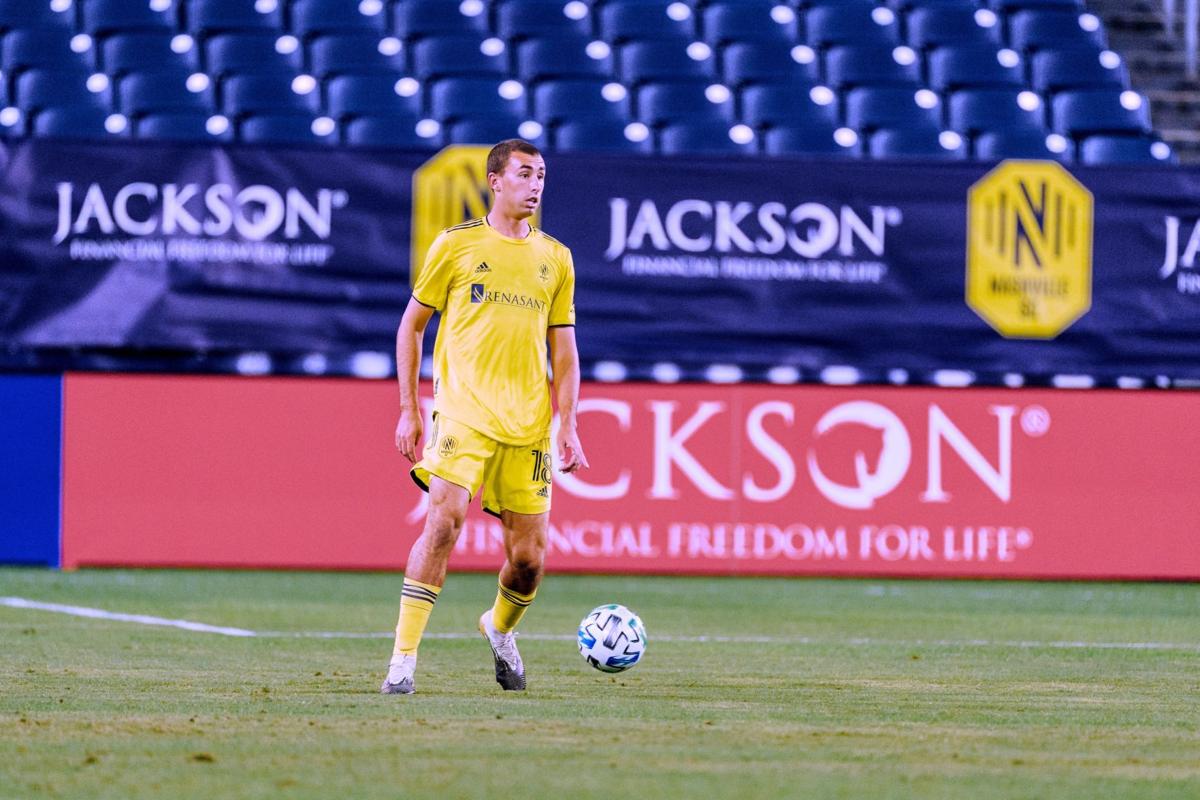 Minnesota United forward Christian Ramirez (right) reacts after teammate Jack Blake (not pictured) scored an insurance goal in stoppage time in the second half during a game between St. Louis FC and Minnesota United FC on Wednesday, June 1, 2016, at Soccer Park in Fenton. At left are St. Louis midfielder Parker Maher and goalkeeper Mark Pais. Photo by Chris Lee, clee@post-dispatch.com

Jack Maher’s introduction to professional soccer could not have been any stranger.

An Althoff Catholic High product who never played high school soccer, Maher instead starred in the St. Louis Scott Gallagher system and went on to compete during the summer of 2017 and 2018 with St. Louis FC of the United Soccer League.

“It was a great opportunity to grow and to learn at the professional level,” Maher, now 21, recalls. “Being a central defender, my playing time then was limited. But going to practice each day with a good attitude, I was able to learn a lot a lot from the coaches and my older teammates. And that experience has helped me greatly.”

Maher moved on to Indiana University, where he excelled in two seasons as a starter at center-back. Voted the Big Ten Conference Freshman of the Year in 2018, Maher was one of just three players to start all 24 matches for the Hoosiers, who went 20-3-1 overall and finished 8-0 atop the conference while leading the NCAA in shutouts (15) and allowing just 13 goals all season. Ranked No. 1 in the nation, the Hoosiers reached the NCAA semifinals in Santa Clara, California, where they were upset 2-0 by No. 15 Maryland. The Terrapins won the title, beating Akron 1-0 in the title game.

The next year, after losing a number of key players to graduation, a new-look Indiana squad again excelled. The Hoosiers (15-3-4) again won the Big Ten and were ranked ninth in the nation when they were upended 1-0 in OT in a Sweet 16 loss to No. 22 Santa Barbara. The loss ended a 38-match home unbeaten streak.

Maher, the Big Ten Defensive Player of the Year, was named second team All-America by the United Soccer Coaches and earned third-team recognition from Top Drawer and College Soccer News. He once again started every Hoosier game that season and finished his sophomore season with three goals and four assists.

That December, Maher signed with Generation Adidas prior to the Major League Soccer SuperDraft and on Jan. 9, 2020, he was selected with the second overall pick by the expansion Nashville Soccer Club.

“From Day 1, everyone in Nashville has been up front and honest with me,” Maher said. “At that point, when I was drafted, I knew I wasn’t ready to step in and play. My goal isn’t about being a great player at age 20 or 21, it’s about being a top player in Nashville for a long, long time.

“My mindset right now is about my long-range development as a player.”

And Maher has a similar approach to his off-the-field accomplishments. Due to COVID, he’s been taking extra classes online and hopes to have his management degree from Indiana’s Kelley School of Business before the end of the year.

“My mom will be really happy about that,” he said.

Maher has already reported to Nashville for training as the MLS deals with its ongoing contract negotiations. With the goal of getting bigger, faster and stronger, Maher is again working with head performance coach John Ireland and massage therapist Steven Mason to improve his strength and fitness level.

“I’ve put in the time, doing extra workout sessions, and I can definitely see and feel the difference,” Maher said. “At this level, there’s a lot that is out of my control, but the one thing I can control is how hard I work and that’s something I’m constantly thinking about. On this team, our center-backs are very good and getting to work in practice every day with (2020 MLS Defender of the Year) Walker Zimmerman is a huge advantage for me. He’s become a mentor and I’m learning as much as I can right now.”

Maher, who made two starts and one appearance as a reserve with Nashville last season, opened his rookie campaign with the United Soccer League Championship’s Charlotte Independence as part of a loan arrangement. In that season’s opening game on March 8, a Sporting Kansas City II shot in the 19th minute deflected off Maher for an own goal.

Due to the coronavirus restrictions, it would be the only USL Championship game Maher would play last summer.

“My first pro game and I scored for the other team; that’s one of those things I’ll always remember,” Maher said, laughing. “The guys here in Nashville, they kidded me about it. But like I told them, we came back and we won that game 2-1. To me, that’s the most important thing.”

SIUE women's soccer set to face No. 12 Virginia in NCAAs

The wait is over for the Southern Illinois University Edwardsville women’s soccer team.

The search is on for the first players to wear the St. Louis City SC crest

While the MLS team won't start play until 2023, it's under-17 team will play in MLS Next starting in September

How 'The Lord of All Indoors' crushed the hopes of 17,206 Steamers fans 40 years ago

In the 1981 Major Indoor Soccer League Finals, Steve Zungul of the New York Arrows scored four goals to defeat the St. Louis Steamers. Here is our original report from the March 30, 1981, Post-Dispatch.

US women win match at France

Rapinoe responds to Draymond’s take on women’s sports: ‘That is not acceptable at all’

Minnesota United forward Christian Ramirez (right) reacts after teammate Jack Blake (not pictured) scored an insurance goal in stoppage time in the second half during a game between St. Louis FC and Minnesota United FC on Wednesday, June 1, 2016, at Soccer Park in Fenton. At left are St. Louis midfielder Parker Maher and goalkeeper Mark Pais. Photo by Chris Lee, clee@post-dispatch.com