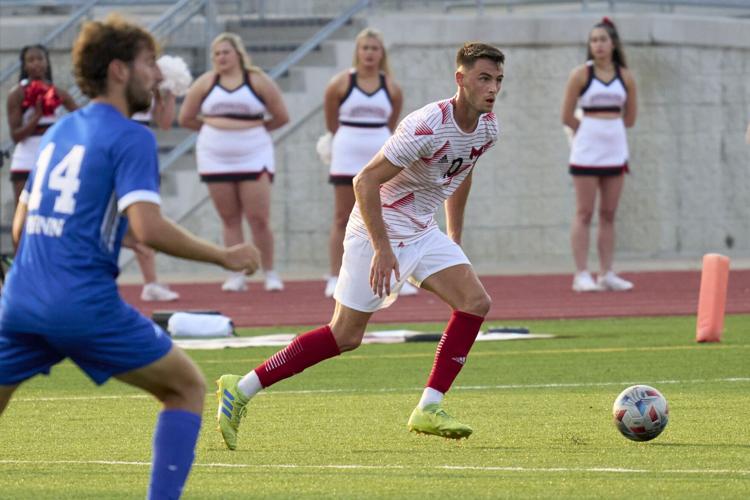 Cedric Sengl, right, a midfielder from Germany, started all 20 games for Maryville University last season and finished with two goals and five assists. 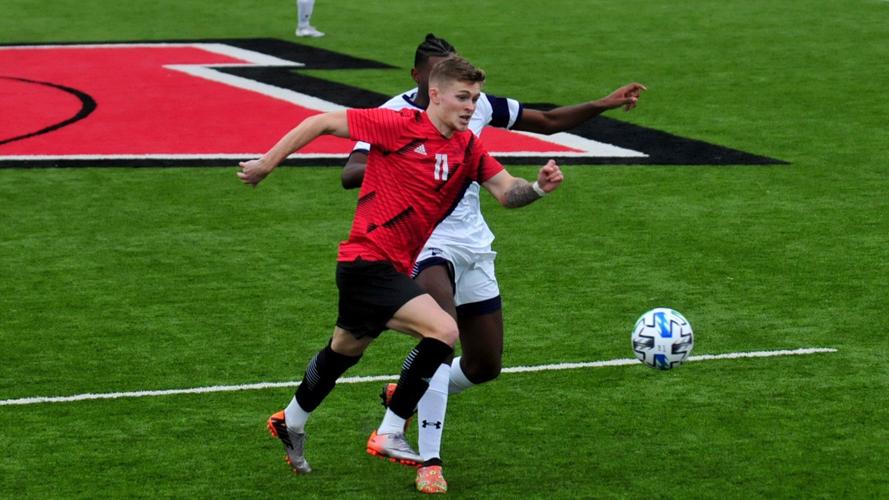 The Maryville University men’s soccer team has enjoyed a great deal of success in recent seasons.

The Saints have earned NCAA Division II Tournament berths in their past four campaigns — there was no tourney in 2020 because of COVID-19 — and reached the quarterfinals in 2019. In that time, Maryville has won the Great Lakes Valley Conference tournament title twice.

But the Saints never have won the GLVC regular-season championship.

“That’s definitely one of our goals,” said Saints coach David Korn, whose record is 74-29-15 since taking over the program in 2016. “We have 85% of our guys back from last season, and we added a few more key guys in January; we’re definitely excited about this group and its potential. We know we’re in a great league, and that’s always going to be a challenge. Even against the teams at the bottom of the standings, you’re playing 1-0 and 2-1 games. In the GLVC, you have to be at the top of your game at all times because every single game is a challenge.”

When the NCAA Division II rankings recently were released, Maryville was at No. 25. Indianapolis, at No. 4, and No. 16 University of Illinois-Springfield — other members of the GLVC — also were ranked nationally.

“It’s nice to be ranked, but we know the focus of the season is to be ranked at the end, not the beginning,” Korn said. “At this point of the year, it really doesn’t mean a whole lot except maybe as bulletin-board material to try and motivate your group.”

Maryville opens its regular season late this month in Michigan against Great Lakes Intercollegiate Athletic Conference foes Saginaw Valley State (10-5-5) and Davenport University (11-8-1). The Saints will be challenged early in the GLVC, playing Sept. 11 at Indianapolis and hosting Illinois-Springfield on Sept. 16.

The Saints figure to be led by a trio of seniors that includes central defender Andrew Schulz (St. Dominic), midfielder Cedric Sengl from Germany and forward Mirza Hasecic from Iceland.

“Andrew has been a starter in the backfield since he came on campus and he’ll play a key role for us in the back,” Korn said. “Cedric plays a similarly important role in the middle of the field and Mirza is our threat up top; he’s one of the top scoring threats in Division II.”

Sengl, the only Maryville player to start all 20 games a year ago, finished his junior season with two goals and five assists. Hasecic has led the team in scoring the last two season and enters this fall with 25 goals and nine assists. Hasecic is a two-time all-league player who also earned all-Midwest and Scholar All-America honors last fall.

Other key players for the Saints include goalkeepers Nick Hemann (Alton Marquette), who made 15 starts, went 9-4-2 and posted six shutouts last year, and Albert Escuin, a senior from Spain who transferred from Palm Beach Atlantic University in Florida; and forwards Sebastian Weitlander from Austria and Bryce Glisson, an Edwardsville High graduate who played previously at Dayton.

“We definitely have some quality and some depth, which is key,” said Korn, whose coaching staff includes Sean Clancy (Rockwood Summit) and Derek Zuniga. “The challenge is putting it all together and keeping everybody healthy. We have the pieces necessary to be successful, but we need a good work rate and we need everybody focused on doing whatever’s needed to get better throughout the season.”

Korn expects the GLVC to be as competitive as ever.

“Indy’s coach (Shaun Mahoney) left to take a job at Xavier, but Gabe Hall takes over and he’s an experienced coach who previously worked at Missouri-Rolla,” Korn said. “Lindenwood is Division I now, and they were always a difficult team to play against. I think the league’s as tough as ever with six or seven or maybe even eight really strong teams. But to me, that just adds to the excitement for us.

“Due to our league schedule, playing on Fridays and Sundays, you have to be talented, and you also have to find a way to develop some depth.”

Where is Lee Corso today? Lee Corso misses ESPN "College GameDay" due to "being under the weather" at Clemson vs. NC State football.

How to watch South Carolina vs. SC State football on TV, live stream plus game time

Who did Lee Corso pick? See his Tennessee vs. Florida football headgear pick

Check out the Lee Corso headgear pick on ESPN "College GameDay" from the Tennessee Vols vs. Florida Gators football game.

Alex Palczewski lifted director of athletics Josh Whtiman off the ground in celebration after the road win over Wisconsin that was the program's first in 20 years.

The Lindenwood University football team dominated Saturday night, rolling to 25-point halftime lead before cruising to a 37-3 victory over vis…

Cedric Sengl, right, a midfielder from Germany, started all 20 games for Maryville University last season and finished with two goals and five assists.