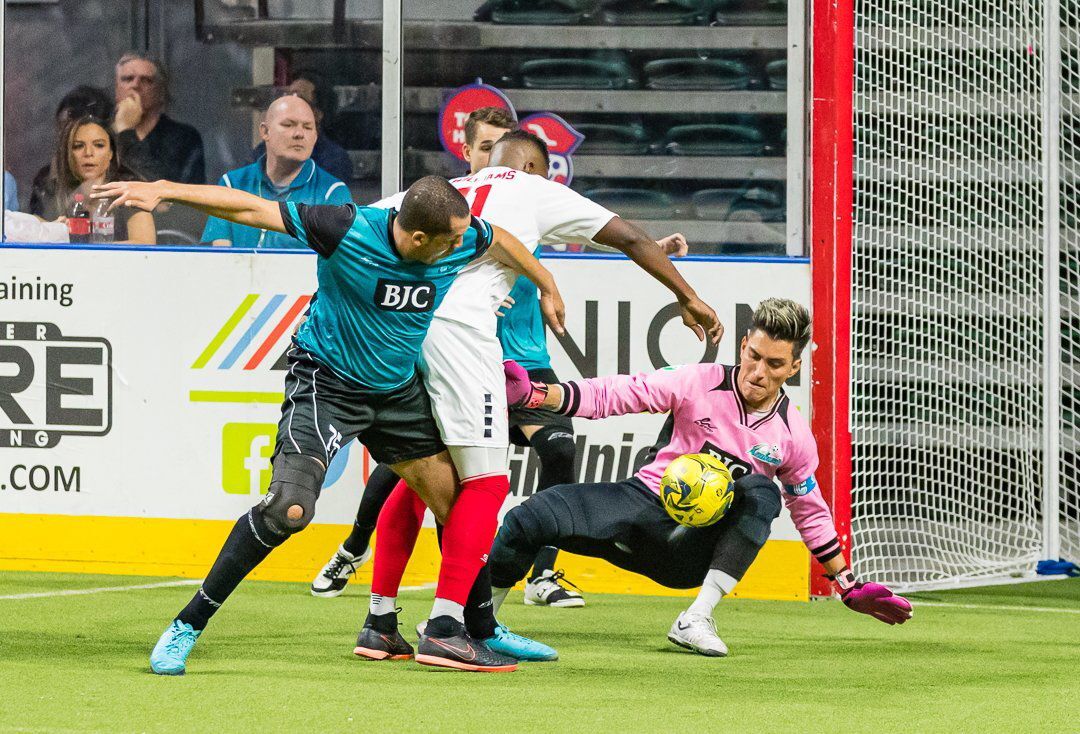 St. Louis Ambush defender Jonatan Santos and goalkeeper Paulo Nascimento team up for a save last season. Nascimento, a Brazilian who's been with the Ambush since 2017, earned a spot in the MASL All-Star Game a year ago after going 9-9 and making 231 saves last season. (Photo from Scott Neer, St. Louis Ambush) 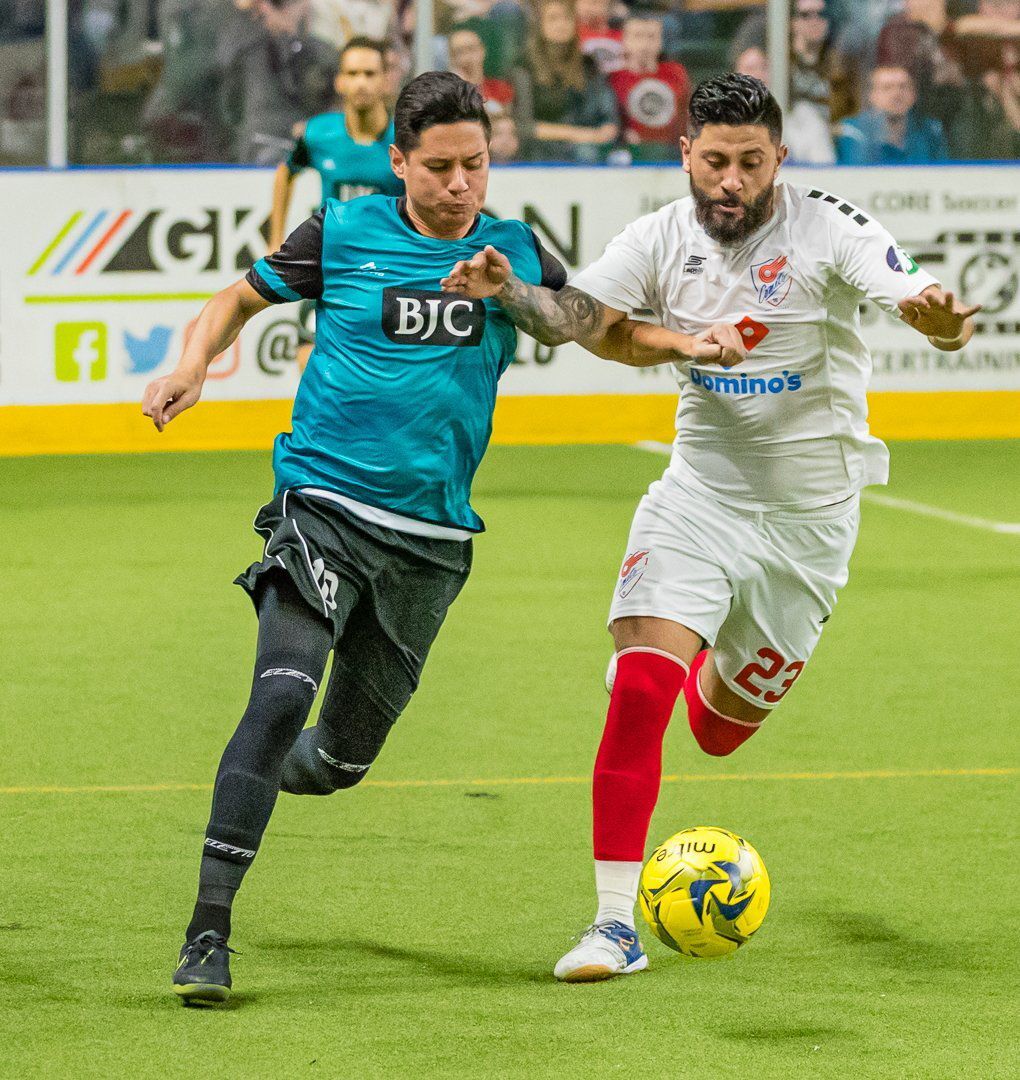 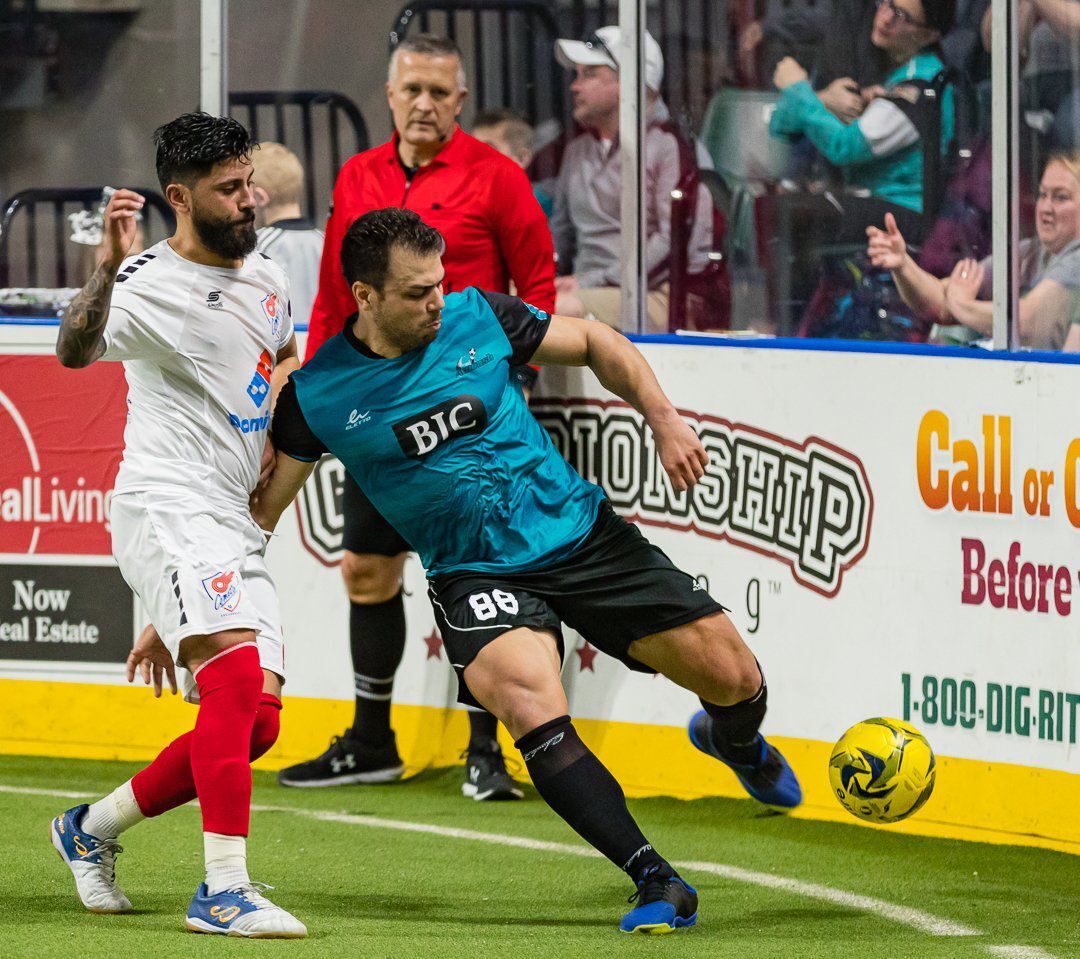 The St. Louis Ambush of the Major Arena Soccer League are scheduled to kick off their season early next month. But due to the uncertainty of the COVID-19 pandemic, the league has only released its January schedule.

Because of travel restrictions, arena availability and fan safety during the pandemic, long-term scheduling was nearly impossible. For that reason, the MASL hopes to release an extended schedule further into the season if circumstances permit.

The MASL announced early this month that 11 clubs — the Ambush, Baltimore, Dallas, Florida, Harrisburg, Kansas City, Ontario, Rochester, San Diego, Tacoma and Utica — will participate in a modified 2021 season. Mesquite, Milwaukee, Monterrey, Sonora and Turlock will sit out the upcoming campaign due to COVID-19 restrictions.

The Ambush are scheduled to open the season Jan. 2 and 3 in Florida against the Tropics before taking on the Sidekicks in Dallas on Jan. 9. The team will return to Family Arena in St. Charles for its home opener against the Kansas City Comets on Saturday, Jan. 16, before hosting the Tacoma Stars on Sunday, Jan. 24.

St. Louis will close out the month with a pair of home games against Florida on Friday, Jan. 29, and Sunday, Jan. 31.

The Ambush will play a pair of preseason games in the Central Cup, hosting the Wichita Wings Saturday at 2:05 p.m. and the Dallas Sidekicks on Sunday, Dec. 20, at 12:05 p.m.

An early December preseason match against Tacoma was canceled as the Ambush put additional safety measures in place to keep fans and players safe. At that time, protective glass was added to surround the entire field.

Face masks will be required for all fans, and crowd size will be limited.

“We want to ensure that all proper safety protocols, including the new measures, are in place before taking the field,” Ambush GM Jeff Locker said in a release. “The safety of our fans, players and staff are of the utmost importance.”

With a solid core group returning and a few key additions, Ambush coach Hewerton Moreira cannot wait to get started. Last year, the team had its final three regular-season games canceled due to the coronavirus and finished the season 9-12.

“We felt good about the way we were playing and felt like we had a chance to finish .500,” said Hewerton, a Brazilian who goes by his first name only, pronouncing it “Everton.”

Hewerton continued: “We return a good deal of talent and experience and feel like the players we’ve added are going to make a difference, too. Obviously, we’ll know a lot more after the exhibitions, but I’m very confident in the team we have right now.”

Schmermund, a McCluer High graduate who also starred at Florissant Valley Community College, started his professional career with the Ambush and spent two seasons here before signing in 2018-19 with the Orlando SeaWolves. He split last season between Orlando and Baltimore.

“Richard is someone who’ll add a lot to our lineup,” Hewerton said. “He knows the system and he’s adjusting quickly.”

But it’s the addition of Ferdinand, a former MASL All-Star who previously helped both the Baltimore Blast and Milwaukee Wave to league titles, who has Hewerton pumped up. In 226 career games, Ferdinand has 181 goals and 211 assists. Last season in Milwaukee, he played in 20 regular-season games and finished with 17 goals and 27 assists.

“Probably the best addition in my three years here,” Hewerton said. “He’s an All-Star with championship experience and truly one of the best players in this league.”

In goal, the Ambush return Paulo Nascimento, who went 9-9 a year ago in his third season as a starter.

“We’ve worked hard to put together a solid core to build around and added both talent and experience to that mix,” Hewerton said. “In most years, we’re able to get together in the summer to start training. Unfortunately, with all the protocols we had to follow, we’re not exactly where we’d like to be at this point. But we feel like we’re very close.

“I feel good about the team we’ve put together and I’m looking forward to the December games to give us a better idea of what we have and where we need to improve. I look for us to be stronger defensively because we’re more experienced there and because of the players we’ve added, I definitely expect to create more scoring chances and generate more goals.”

(Home games in CAPS and played at Family Arena)

Aedan Stanley, of Columbia, Ill., former STLFC player, is selected at No. 21.

Alex Morgan, captain of the world champion U.S. women’s soccer team, has tested positive for COVID-19 and will not be called into the national team’s first training camp of 2021.

Carli Lloyd, Megan Rapinoe and 25 others called up for U.S. national team

Former world players of the year Carli Lloyd and Megan Rapinoe are among the 27 women called up Wednesday for the national soccer team's first training camp of 2021, but captain Alex Morgan will not participate after testing positive for COVID-19.

St. Louis Ambush defender Jonatan Santos and goalkeeper Paulo Nascimento team up for a save last season. Nascimento, a Brazilian who's been with the Ambush since 2017, earned a spot in the MASL All-Star Game a year ago after going 9-9 and making 231 saves last season. (Photo from Scott Neer, St. Louis Ambush)