St. Louis not on list of finalist cities for MLS expansion soccer teams
0 comments
Share this
{{featured_button_text}}
1 of 2 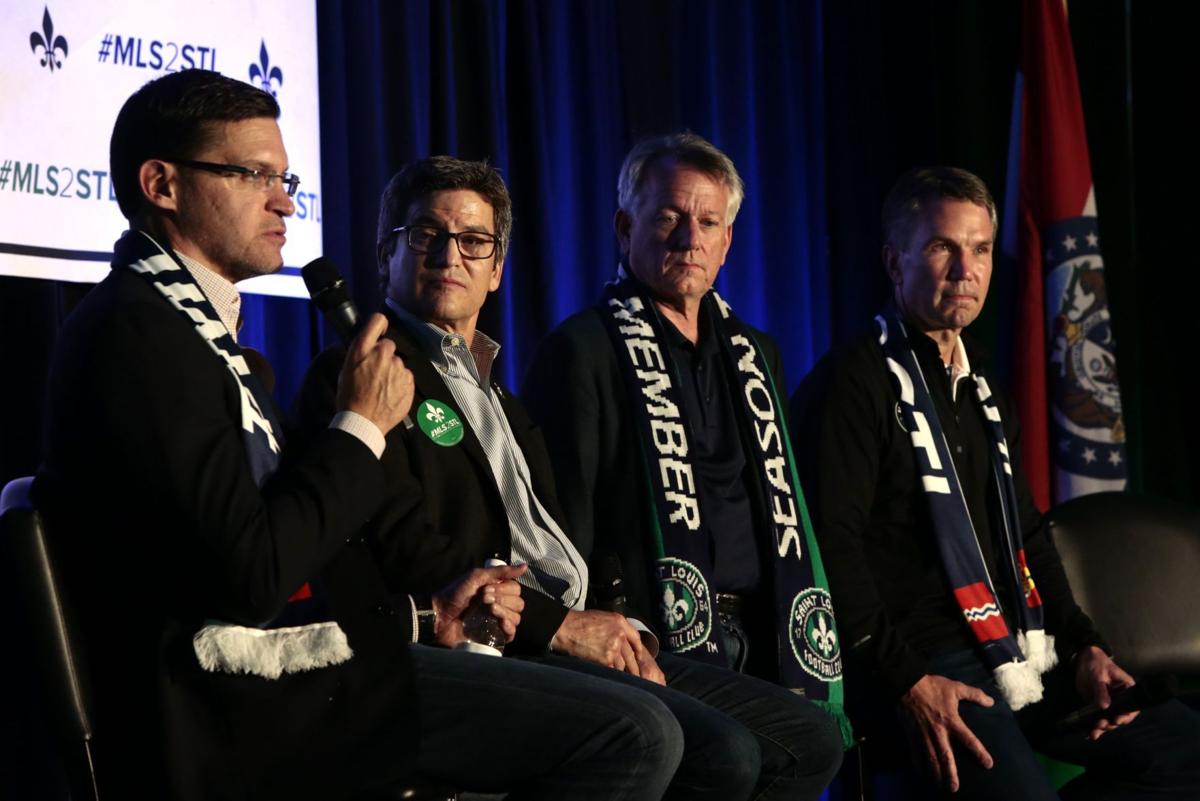 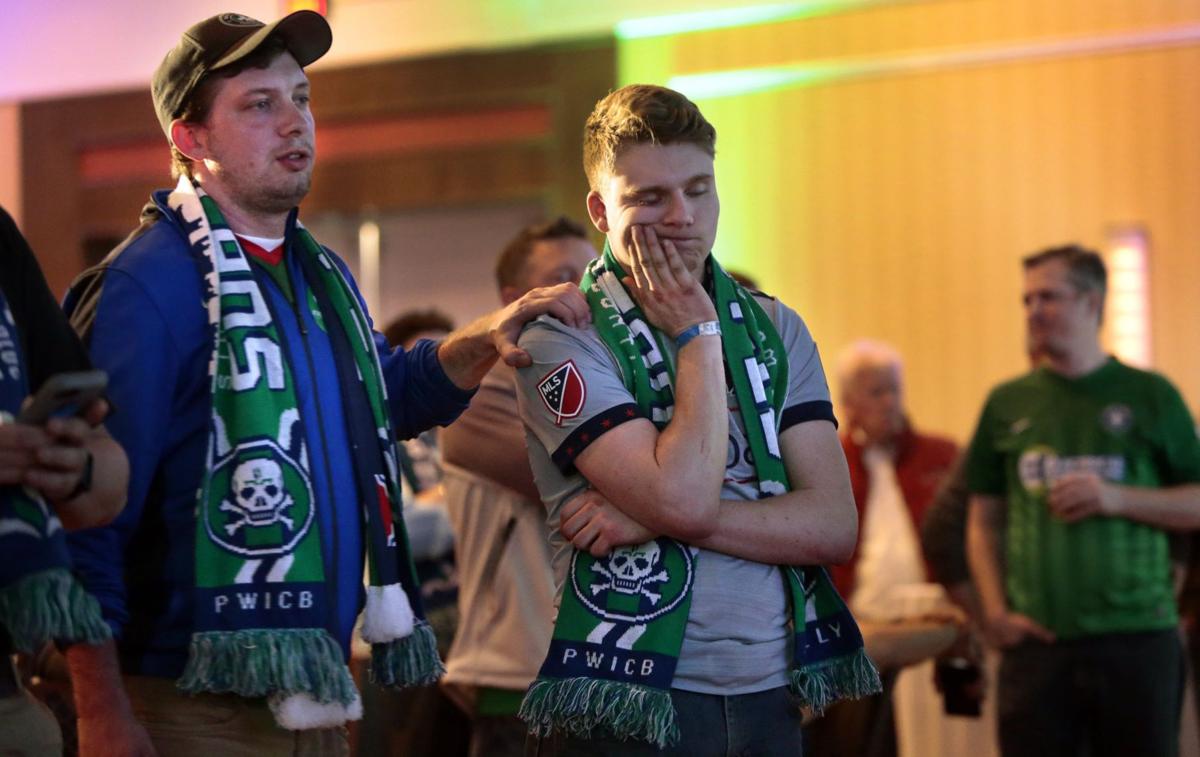 Stuart Hultgren (left) of Clifton Heights stands with Chris Maddock of Hazelwood at Union Station as they learn that a St. Louis proposition to fund a soccer stadium failed on Tuesday, April 4, 2017. "I don't think St. Louis realizes what it just missed out on," said Hultgren. Photo by Robert Cohen, rcohen@post-dispatch.com

Major League Soccer has named four finalists for its next two expansion teams, and St. Louis is not one of them.

Cincinnati, Detroit, Sacramento and Nashville, Tenn., are the cities that made the cut, MLS said Wednesday. Those cities will present bids to the league on Dec. 6, and a decision is expected before the end of the year.

St. Louis’ failure to make the list wasn’t a surprise. In April, St. Louis voters rejected a use tax on businesses to help fund a downtown soccer stadium, and a league spokesman called the vote at the time “a significant setback” for the St. Louis bid.

St. Louis is still among the cities that made bids for an MLS expansion team that could someday get a team, however. In its statement Wednesday, MLS said there are a total of four expansion slots available for the league as it expands to 28 teams.

Other cities that made bids in January for an MLS team were Charlotte, N.C.; Indianapolis; Phoenix; Raleigh-Durham, N.C.; San Antonio; San Diego; and Tampa-St. Petersburg, Fla.

“While only Cincinnati, Detroit, Nashville and Sacramento are being considered for the next two expansion teams, all remaining markets are under consideration for the following two expansion clubs that will be announced at a later date,” the MLS said in a statement.

Paul Edgerley, former managing director of Bain Capital Private Equity in Boston, is majority investor and chairman of SC STL, an ownership group behind the bid to bring an MLS team to St. Louis. Edgerley is a business partner with former Anheuser-Busch president David Peacock, who currently is president and chief operating officer of Maryland Heights-based Schnuck Markets.

Edgerley, who owns dozens of Jamba Juice franchises with Peacock, congratulated the four finalist cities in a statement and said given the outcome of the ballot measure in April, he was not surprised by MLS’ finalist decision Wednesday.

“Our group remained open in the meantime to considering ideas or proposals that could have brought MLS to St. Louis, but unfortunately none surfaced,” Edgerley’s statement said. “We’re disappointed that St. Louis couldn’t be part of today’s announcement, but if the region can come together in the months ahead, we remain interested in the next phase of MLS expansion. There is no city more deserving of — or better suited for —an MLS expansion club than St. Louis.”

From the Associated Press:

The Metro Nashville City Council on Nov. 7 approved $225 million in revenue bonds to construct a 27,500-seat soccer stadium and an additional $50 million in bonds for renovations and improvements around the site at the current fairgrounds. Nashville's group includes John Ingram, the chairman of Ingram Industries Inc., and the Wilf family, owner of the NFL's Minnesota Vikings.

Sacramento's group includes Kevin Nagle, a minority owner of the NBA's Sacramento Kings, and Jed York, CEO of the NFL's San Francisco 49ers. The group said in July it was starting pre-construction activity for a 19,621-seat downtown stadium.

MLS has 22 teams this season and Los Angeles FC is to start play in March at a new stadium under construction near the Coliseum. Former Manchester United, Real Madrid and LA Galaxy star David Beckham was tentatively awarded a Miami team in 2014, but that is contingent on a stadium site he has thus far failed to secure.

Cincinnati's group includes Carl H. Lindner III, co-CEO of American Financial Group and owner of FC Cincinnati in the second-tier United Soccer League. The Cincinnati City Council on Monday approved a plan for the city to invest up to $36 million in infrastructure such as roads around a privately funded stadium. A day earlier, the community council in the Oakley neighborhood where the stadium would be built voted against the proposal.

St. Louis finishes at No. 31 on 'best sports city' list

Ortiz: MLS outlook here not so good after latest news

A year ago, very few people outside of Cincinnati or Nashville would have given those cities an edge over St. Louis in the race to earn one of…

Stuart Hultgren (left) of Clifton Heights stands with Chris Maddock of Hazelwood at Union Station as they learn that a St. Louis proposition to fund a soccer stadium failed on Tuesday, April 4, 2017. "I don't think St. Louis realizes what it just missed out on," said Hultgren. Photo by Robert Cohen, rcohen@post-dispatch.com