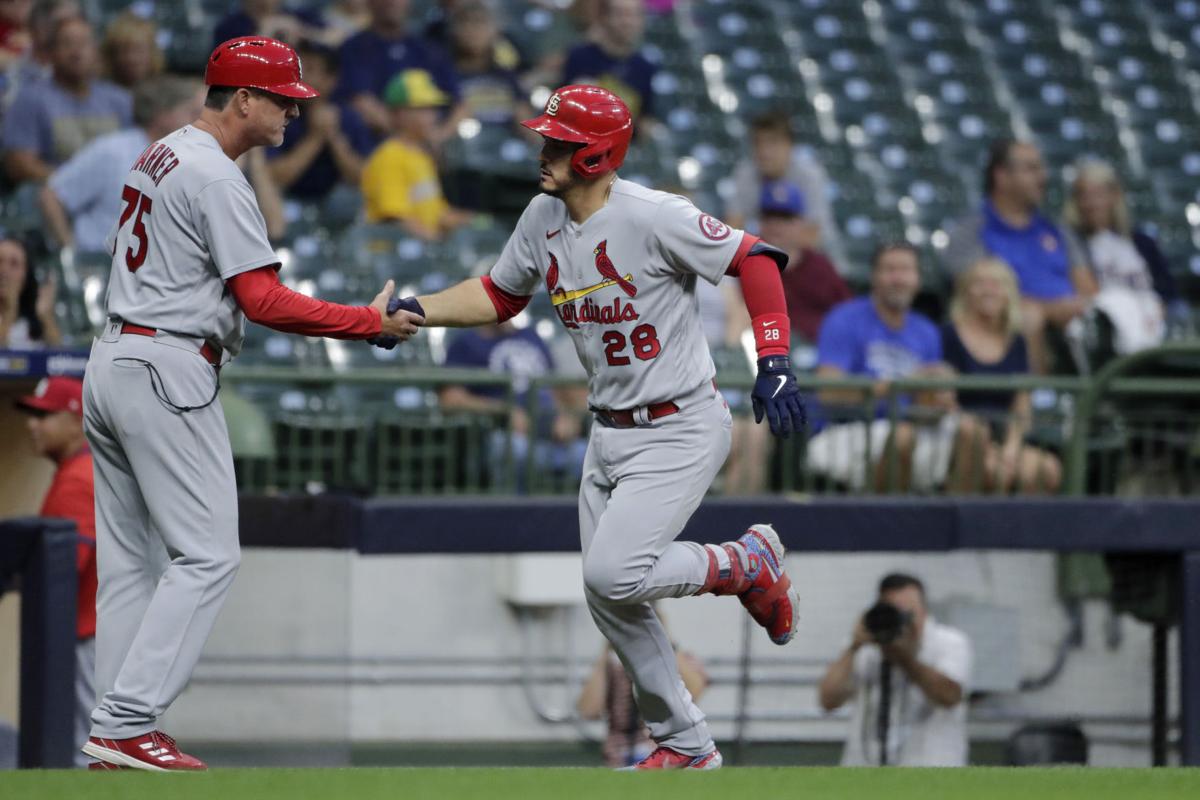 The' Cardinals' Nolan Arenado, right, is congratulated by third base coach Ron 'Pop' Warner while rounding the bases on his two-run homer in the first inning Monday night in Milwaukee.

The Cardinals' Paul Goldschmidt, left, and Tyler O'Neill have been on a tear recently, including on Saturday night as they celebrate after O'Neill hit a dramatic eighth-inning homer to help fuel a 3-2 victory over the Padres.

If the Cardinals successfully turn this September surge into a memorable October run, one overlooked game should get some love.

For all of the talk about how a dramatic road sweep of the Mets lit this raging fire, an overlooked home split against the Dodgers stacked the coals.

“It started us on our way,” manager Mike Shildt said recently.

The Cardinals were only one game above .500 and already trailing by a run in the bottom of the first inning on September 8, when a lineup started doing something that has become common in the wins that have followed.

That win against a Dodgers team the Cardinals could wind up facing in the NL wild-card game started the 11-1 blitz that includes nine consecutive wins after Monday night’s 5-2 defeat of the Brewers in Milwaukee. The owners of MLB’s longest active winning streak have scored an average of 5.5 runs per game over the last 12. Only the powerhouse Giants (6.09) can match that during this span. The Dodgers, for what it’s worth, have averaged 4.8.

Some of this can’t be explained. Some of it is the beauty and the madness of baseball. Some of it appears to be attributable to a genetic trait the Cardinals have, one that makes them stronger and more resilient the longer you let them hang around. Some of it can be explained, though, because some of it has happened right before our eyes.

Here are five reasons the Cardinals’ offense has started to thrive:

• The long ball is back. Molina’s blast against the Dodgers that propelled a four-game split in that series started a run of 18 homers in the past 12 games. Ten of the 11 wins included at least one homer. Four of the wins included two or more. The Cardinals are 67-32 when they hit at least one home run. They are 38-12 when they hit more than one. Not exactly the most in-depth stats, I know. But the numbers don’t lie. (Contrary to the belief of some, home runs are good!)

• One lineup change worked wonders. Shildt’s decision to plug Tyler O’Neill into the third spot, splitting up the one-two punch of Goldschmidt and Nolan Arenado, changed things for the better, big time. Now Shildt has a one-two-three punch. Shildt started the trend on August 22. Ever since then, Goldschmidt (.711 slugging percentage, third in NL); O’Neill (.635, eighth); and Arenado (.484, 28th) can be found in the NL’s top-30 for slugging percentage during that span.

“I think it makes the lineup a lot better," Nolan Arenado said of the change after Monday's win. "I feel like I’ve done a good job with guys in scoring position. The four-hole is usually a spot where guys are on base. T.O is driving in runs, but we need him to get at-bats, a lot more at-bats than in the five or six hole. Obviously, Goldy and Tommy have done a great job of getting on base. Obviously, Goldy has just been unbelievable in the second half. Our lineup is pretty fluid right now. Having O’Neill up (near the) top, he gets at-bats. And he flies, too. Whenever he’s on base, you know he’s going to score.”

• Edmundo Sosa’s emergence during Paul DeJong’s decline as the starting shortstop has injected production and pizazz into the mix. Sosa entered Monday’s game averaging .330 with a .393 on-base percentage and a .544 slugging percentage since the start of August. Among major-leaguers with 100 or more at-bats since August, Sosa’s .937 on-base plus slugging percentage ranked 12th in the NL, one spot ahead of two-time All-Star Rockies shortstop Trevor Story, the soon to be free agent the Cardinals poked around on at the trade deadline. Sosa has been remarkably better as a starter compared to a sub, and the Cardinals are 39-29 when he starts.

• Tommy Edman rebounded. The second baseman hitting leadoff is nothing new. He entered Monday’s game with 70 more at-bats there than the next leading NL leadoff hitter. But when Edman’s production dropped during a miserable June, he started splitting leadoff reps with Dylan Carlson. A bounce-back for Edman began in July and it has continued.

Shildt put Edman back at leadoff for good on August 13, and since then he’s averaging .315 with a .354 on-base percentage and a .466 slugging percentage. The switch-hitting 26-year-old leads the NL in doubles (41) and ranks second in stolen bases (26). Fair questions stirred about Edman’s ability to handle leadoff during his struggles. They’ve settled. Considerably.

There is no sugarcoating the fact the Cardinals have been one of the most meager lineups against righthanded pitching this season. Between opening day and their second home loss to the Dodgers on September 7, embattled hitting coach Jeff Albert’s hitters slugged just .383 against righties.

Here are the only NL teams with a lower slugging percentage against righties: The Marlins, the Diamondbacks and the Pirates. You don’t want to be on a list with those teams; none of them have 65 wins.

Something’s changed. The Cardinals jumped on Dodgers righty Mitch White on September 8 to start the 11-game surge that carried them into Milwaukee. They slugged .465 against righties during the run.

Some things really can’t be explained.

Sign of the times: Despite being No. 1 nationally, Cards have lost nearly half their TV households from six seasons ago.

Hochman: ‘You want him in your dugout.’ Why Skip Schumaker checks boxes to be Cardinals manager

“Skip is a guy that moves the needle,” former Cardinals teammate Daniel Descalso said Sunday. “He makes people around him better.”

Friendly, let's-have-fun style has served him well in a 34-year run as sports director at Channel 11.

BenFred: Next Cardinals manager could wind up thanking Shildt

It's a hard thing, managing the modern Cardinals

Goold: Why Reyes instead of Flaherty in ninth inning of wild-card game?

Hochman: If this is goodbye to the Cardinals’ Matt Carpenter, St. Louis should say thanks

Fans got so angry at the guy. The past three years were rough. But Carpenter’s legacy is strong.

Gordo: Gruden's emails remind us why NFL struggled to evolve

Thanks to a trove of Jon Gruden’s offensive e-mails, the public got a look inside one of the NFL’s inner circles.

The' Cardinals' Nolan Arenado, right, is congratulated by third base coach Ron 'Pop' Warner while rounding the bases on his two-run homer in the first inning Monday night in Milwaukee.

The Cardinals' Paul Goldschmidt, left, and Tyler O'Neill have been on a tear recently, including on Saturday night as they celebrate after O'Neill hit a dramatic eighth-inning homer to help fuel a 3-2 victory over the Padres.