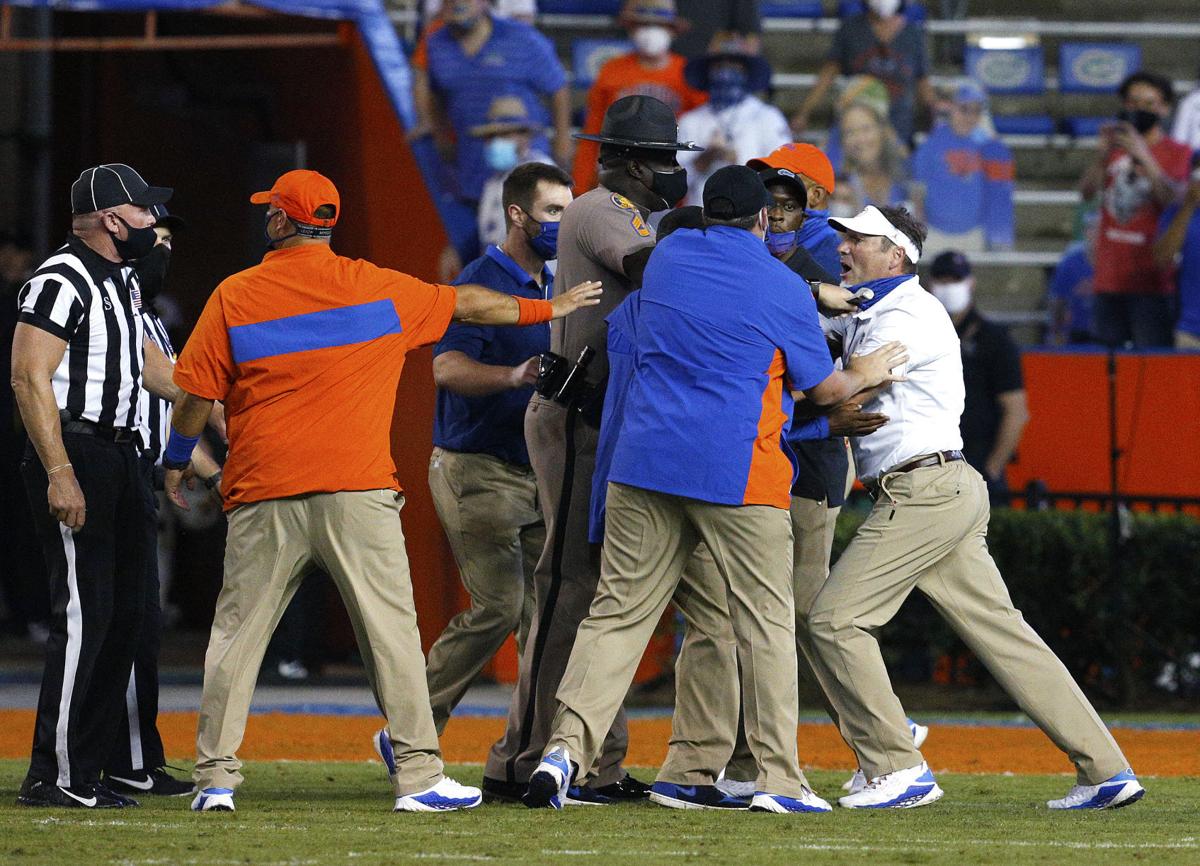 Florida coach Dan Mullen, right, is held back by coaches and law enforcement officers after a fight broke out at the end of the first half of the team's game against Missouri in Gainesville, Fla., Saturday, Oct. 31, 2020. (Brad McClenny/The Gainesville Sun via AP)

Florida coach Dan Mullen, right, is held back by coaches and law enforcement officials after a fight broke out at the end of the first half of a game against Missouri last season.

HOOVER, Ala. — Dan Mullen left his red lightsaber at home Monday, even though it would have paired nicely with his basketball shoes.

Florida’s fourth-year football coach, as unpredictable as he is successful, arrived at The Wynfrey Hotel for SEC media days with an eye-catching pair of Jordans on his feet, but without the Darth Vader mask and Star-Wars specific sword he debuted for his postgame press conference after Florida’s 41-17 thumping of Mizzou last season.

If you don’t remember that Halloween game because of the lopsided score or Mullen’s after-party attire, you certainly will recall the halftime brawl that broke out in The Swamp.

It was sparked by a late hit by Tigers defensive lineman Trajan Jeffcoat against Gators quarterback Kyle Trask.

Said spark then had a can of diesel fuel poured on it by Mullen.

The coach did his best professional wrestling impression by sprinting toward a pack of officials. He shouted and shoved until he was in a huddle of players. He walked away and then came back, flapping his arms over his head to the delight of Florida fans.

Multiple players on both sides were ejected and handed short suspensions in the aftermath.

Mullen was smacked with a $25,000 fine along with a public reprimand from SEC commissioner Greg Sankey for violating the league’s sportsmanship’s bylaws.

Signs of remorse have remained absent.

“He might have gotten out of hand that day,” Gators defensive end Zach Carter, one of the players ejected after the fight, admitted here Monday afternoon. “But one thing I’ll say is, he loves us, and he will go to war for us. A coach that will battle for his players, who wouldn’t want to play for a coach like that? I love Coach Mullen. I like that edge he brings. I like that fire he brings.”

Whether Mullen’s antics during the Mizzou game were a motivational tactic or signs of loose screws remains about as fuzzy as the synopsis of the Gators’ 2020 season along with their outlook for 2021.

“In the East, where is Florida going to be?” SEC Network analyst and former national champion winning Auburn coach Gene Chizik asked Monday while naming his biggest SEC football storylines. “They did everything Dan needed to do. Won the SEC East. They were in the College Football Playoff talk. And then, at the end of the year, though, obviously had a downslide. So, what’s that going to look like?”

Last season Florida beat every SEC East team including Georgia to end the Bulldogs’ hogging of the division title. That was a big step forward for Mullen, who was poached from Mississippi State before the 2018 season to restore Florida to greatness. The Gators finished third in the East in his first year, second in his second and first in his third. That’ll work.

But the Gators’ three straight losses to end last season soured things somewhat. After falling out of playoffs contention, they were embarrassed by Oklahoma in the Cotton Bowl in a loss Mullen unsuccessfully attempted to shrug off.

They could and should have been more.

Yet Florida’s defense was often as bad as the offense was good. Blown coverages were a bugaboo. Florida’s average of 30.8 points surrendered per game was its worst in 100-plus years.

Predictions for Mullen’s fifth team are not quite as lofty, because of a significant amount of uncertainty.

That won’t stop Georgia and Florida from being picked to finish first and second in the SEC East, likely in that order, when the media polls roll out this week.

The Bulldogs are being favored over the Gators even though the Gators won the division title last season.

Mullen took pride Monday in pointing out those were the projections last year too, before the Gators flipped them on the field.

The difference this year is Georgia has an experienced JT Daniels at quarterback ready for what could become a Heisman campaign.

Meanwhile, Mullen, as good of a quarterback whisperer as you will find, has a bit of a project in former backup turned starter Emory Jones.

And that’s not the only potential weak spot.

He said goodbye to his three stars of last year’s high-flying offense — Trask, Pitts and Toney — along with another reliable receiver and two veteran offensive linemen.

If Jones or QB challenger Anthony Richardson becomes the next in the long list of passers Mullen has steered toward great success, the Gators should be fine.

If Florida is in for a down year, which with Mullen does not come often and probably won’t be too low, second-year Mizzou coach Eli Drinkwitz would be wise to take advantage. A signature win against Florida would be a nice addition to the collection he started with last season’s takedown of defending champion Louisiana State.

You don’t have to be a longtime Mizzou sports historian to know the Tigers’ high-water mark in the SEC came during a down time for the Gators. Florida won a combined 11 games during the two seasons (2013, 2014) the Tigers jumped up and took the SEC East. Mullen has won 29 of his 38 games since he arrived at Florida and really started leaning into his renegade persona.

Mullen grinned Monday when asked by an Alabama radio host about his favorite Star Wars movie, a callback to his Darth Vader stunt after his 24-point thumping of Mizzou.

“You can go so many different directions with the Star Wars question,” Mullen said with a grin after passing on the Gator bait.

He can keep smiling if second place in the East is as far as he can fall.

Florida coach Dan Mullen, right, is held back by coaches and law enforcement officers after a fight broke out at the end of the first half of the team's game against Missouri in Gainesville, Fla., Saturday, Oct. 31, 2020. (Brad McClenny/The Gainesville Sun via AP)

Florida coach Dan Mullen, right, is held back by coaches and law enforcement officials after a fight broke out at the end of the first half of a game against Missouri last season.