Would the Cardinals want a replacement of the bench - and would Cardinal Nation want to bet on magic that might not happen? That was part of our discussion this week with Post-Dispatch readers. Here are some of the highlights.

Q: Last week there was mention of "internal discussions" the front office was having regarding Albert Pujols. Aside from that, nothing else. Correct? Pujols is basically John Nogowski, so it’s just a matter of whether Pujols would be OK with a bench role in St. Louis, no?

I was told, per multiple sources, that the Cardinals were having internal discussions on whether it made sense to bring Pujols back -- for selling tickets and for baseball. You hit on one of the comparisons the Cardinals would have to make. Is Pujols this year a better option off the bench than Nogowski, who is also a righthanded hitter who play first base? There is an answer to that question that people should keep in mind: Nogowski is in Class AAA right now. He's on a rehab assignment. But he's not on the bench in the majors, so it's not like they'd be choosing Pujols over someone who is already there. Austin Dean isn't. So is it Lane Thomas that Pujols would replace?

Can I ask another question: Do you like the memories you have of Pujols in a Cardinals uniform, or would you prefer to have him in the uniform now, coming off the bench, and that be part of the memory? You're counting on magic that may not happen. It may. It may not. Are you ready for it not to happen?

Q: With how well Yadier Molina and Adam Wainwright have done so far, is there an appetite on either side to begin looking at extending them into 2022?

A: Not at the moment. Molina would like to continue playing through 2022. He has said as much to the team, and the team is open to that discussion, but the team realizes it has time on its side and doesn't have to make that offer until later in the year, even if that means the calendar year.

Q: Are we seeing Tommy Edman’s ceiling, or is there even more to offer?

A: He leads the league in hits, is one of the more productive and effective leadoff hitters in the game, and he's playing exceptional defense at second base. (Sunday) was a clinic on the position. What more could you want? He's done exceptional, and sure, as he continues you'll see more walks, and then when the walks come, that will lead to some chances to hit for power. If this is his ceiling, you're talking about an everyday player and leadoff hitter for several years. Not too shabby.

Q: Are you concerned with the relief corps? I know the ERA is OK, but every game seems like a ninth-inning cliffhanger.

A: As long as the rotation handles its role, the bullpen could be the best in the division -- that is still the case -- and the offense will look better. What is concerning is all the walks. That could be a product of having to do more than they expected, cover more innings than planned at the start of the season, or it could be the Achilles' heel that catches them. But at the moment, no. If the starters handle their innings, the offense will look better and the bullpen will be fine.

Q: Can you give me the pros and cons of a six-man rotation?

A: The biggest con of all is that most teams don't have five starters they can count on, let alone six. So any team that goes to a six-man rotation is diluting its chances of winning by turning to a pitcher who wouldn't normally be in the rotation. That can wear out a bullpen. So, it's the rare team that actually has six starters it can trust for five, six innings and count on every time out.

The pro, this season, would be limiting the workload on the rotation.

The con, any season, would be lopping off six starts from your best pitcher or your two best pitchers, and instead of giving you 30-33 starts, they're giving you 24-ish, and those other games are being covered by someone with less ability, less consistency, or less durability. Think of a rotation like a lineup. You want your best pitchers to come up the most often, and that's why the opening-day starter is the opening-day starter. He should get the most starts.

Q: How does MLB resolve the tension between tactics that would make the game more interesting (bunting, contact hitting, running, etc.) and what teams believe give them the best chance to win (strikeouts, three true outcomes, defensive shifts, etc.)?

A: The tail is wagging the dog. This is the question that Theo Epstein has been charged with exploring, and you're right about the trouble he faces. The answer is to flip some fundamental part of the game, tweak it, twist it, warp it, so that it gets ahead of the analytics. There are a number of ways to do this. Increasing the size of the bases is one way because it will raise the rate of success on steals, and all of sudden the analytics will be more in favor of that. Moving the mound back is one of the other options being discussed because it would dial back the fastball, take a mph off of it by giving the hitter that much more time to react. I've suggested lowering the strike zone by the width of the ball. That's it. Keep the top part where it is, lower it so the sinker is back, balls in play are more, grounders are up, and watch the game, ahem, shift.

Q: The Cardinals started winning when Harrison Bader returned? He shored up a shaky outfield defense and is hitting. Coincidence?

A: Starting pitching first. But sure, Bader brought some stability. To me there are four elements to the Cardinals' current winning surge. Let's power rank them:

1. Starting pitching has been the key. Steady.

2. Moving Dylan Carlson to No. 2 unlocked the lineup.

3. Opponents. The Pirates and Rockies are not great, Bob.

4. Harrison Bader and the defense overall.

Q: After watching Andrew Knizner play for an extended time do you think he can succeed and be a No. 1 catcher moving forward when Yadier Molina finally hangs up his cleats?

A: Knizner has the ability. The bat is ready. He’s improved defensively. Definitely looks like a starting catcher under the current approach most teams have for the position, which is sharing it more than the Cardinals do. An Ivan Herrera/Knizner tandem would work for the Cardinals.

Q: Has there been any talk about how Nolan Arenado has changed the culture in the Cardinals clubhouse? They just seem like they're having a lot more fun than in previous seasons, and he always seems to be in the middle of it.

A: Yes. There was a lot of talk about that over the weekend and various descriptions of it in the coverage in the newspaper. There was also talk of it during spring training. During a recent interview on a St. Louis radio station I mentioned one thing to watch during the 17-game stretch and the coming weeks was how the Cardinals take on the personality of Arenado. That's starting to happen. Here they go.

Q: Are there any experimental rules you are interested in, and what chance do any of them have of being implemented in the near future?

A: I'm really intrigued by the step-off rule for lefties (on pickoff moves), and think that could move up the ladder swiftly to the majors. I don't mind the pitch clock becoming more of a thing. Both of those could lead to more steals, and that's a good thing. More action, more athleticism, on the base paths. Those are the small tweaks that could have substantive change that intrigue me.

Q: In terms of how teams try to get as much value from a player like Alex Reyes, how do they balance the value of having him pitch the most innings (which would be as a starter) vs. having his fingerprints on more games, but maybe just with an inning (closer)?

A: This is the age-old, million-dollar question that teams wrestle with all the time. They lean on number of pitches and type of pitcher and also the durability of the pitcher to make this decision. And they wrestle with the idea of do you get the most innings or the most-impactful innings from the pitcher? Is it more valuable to get 60 innings that decide a game, or 160 over the course of the season?

I personally side with the 160. You want more at-bats from your best hitter and count that some of them will come in the clutch, right, because that's likely the more you get. Same with a pitcher. In the 160 innings, good bet you're going to get plenty of them that are high-leverage and, bonus!, you get more innings from one of your best pitchers. That is the decision the Cardinals made with Adam Wainwright. They would have made it with Dan Haren, too. And they've had that decision made for them -- or made easier for them -- with Alex Reyes. 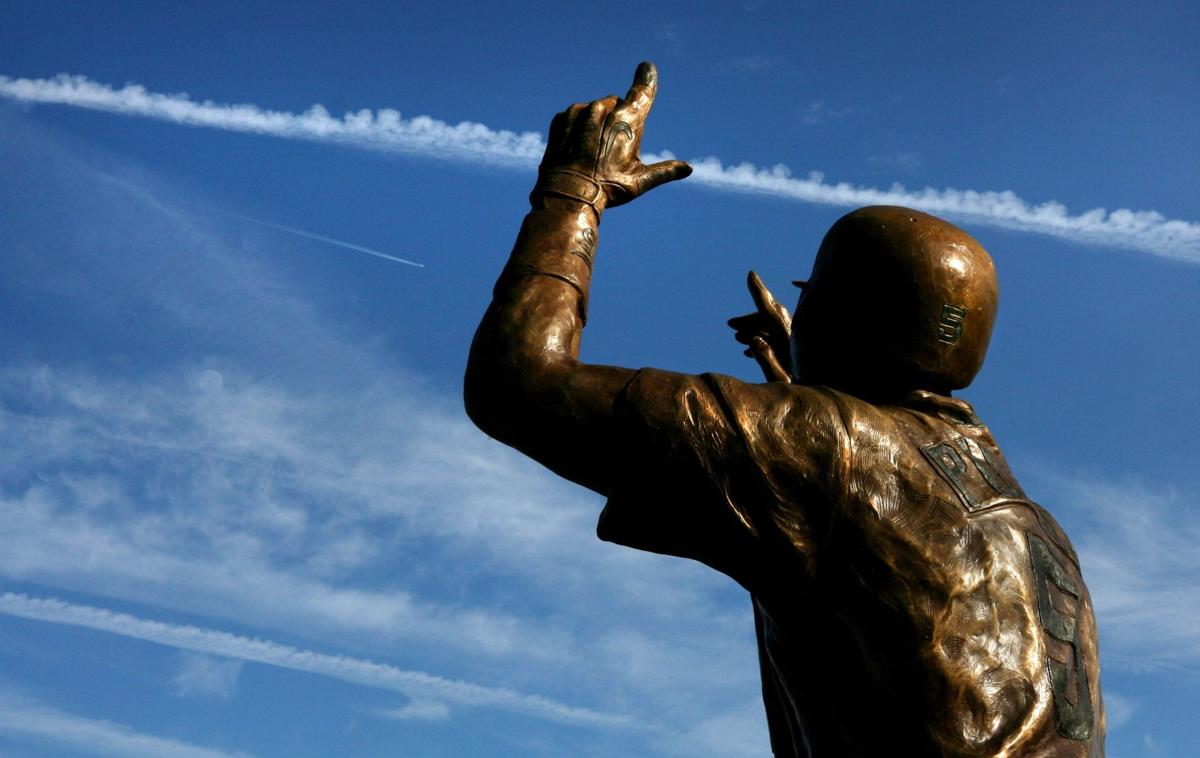 Aircraft contrails fill the sky as the Albert Pujols statue stood outside the Pujols 5 Westport Grill on Thursday December 8, 2011 after Pujols agreed to terms with the Los Angeles Angels. Photo by Robert Cohen, rcohen@post-dispatch.com 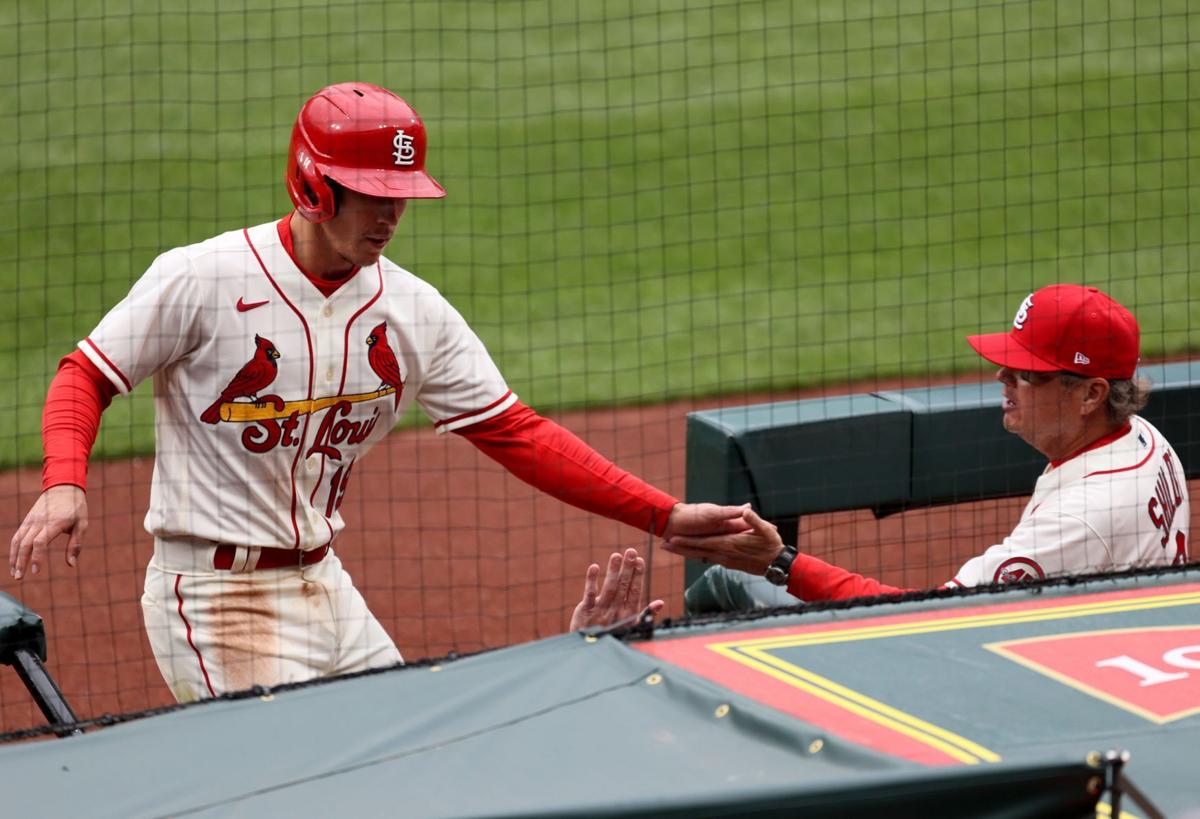 Cardinal infielder Tommy Edman is congratulated by manager Mike Shildt on Saturday, May 8, 2021, after scoring the first point in a game against the Colorado Rockies at Busch Stadium in St. Louis. (Christian Gooden photo) 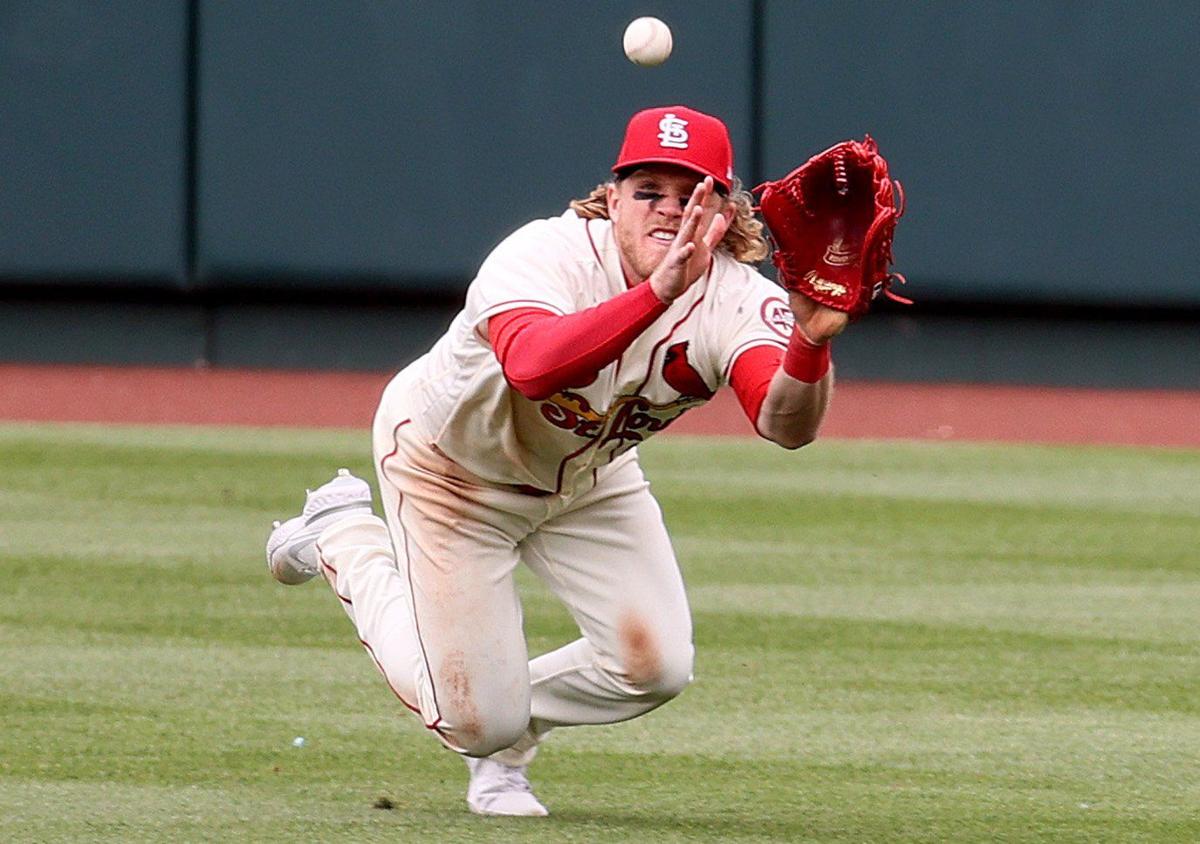 Cardinal outfielder Harrison Bader makes a running catch on Saturday, May 8, 2021, in the seventh inning of a game against the Colorado Rockies at Busch Stadium in St. Louis, Mo. Photo by Christian Gooden