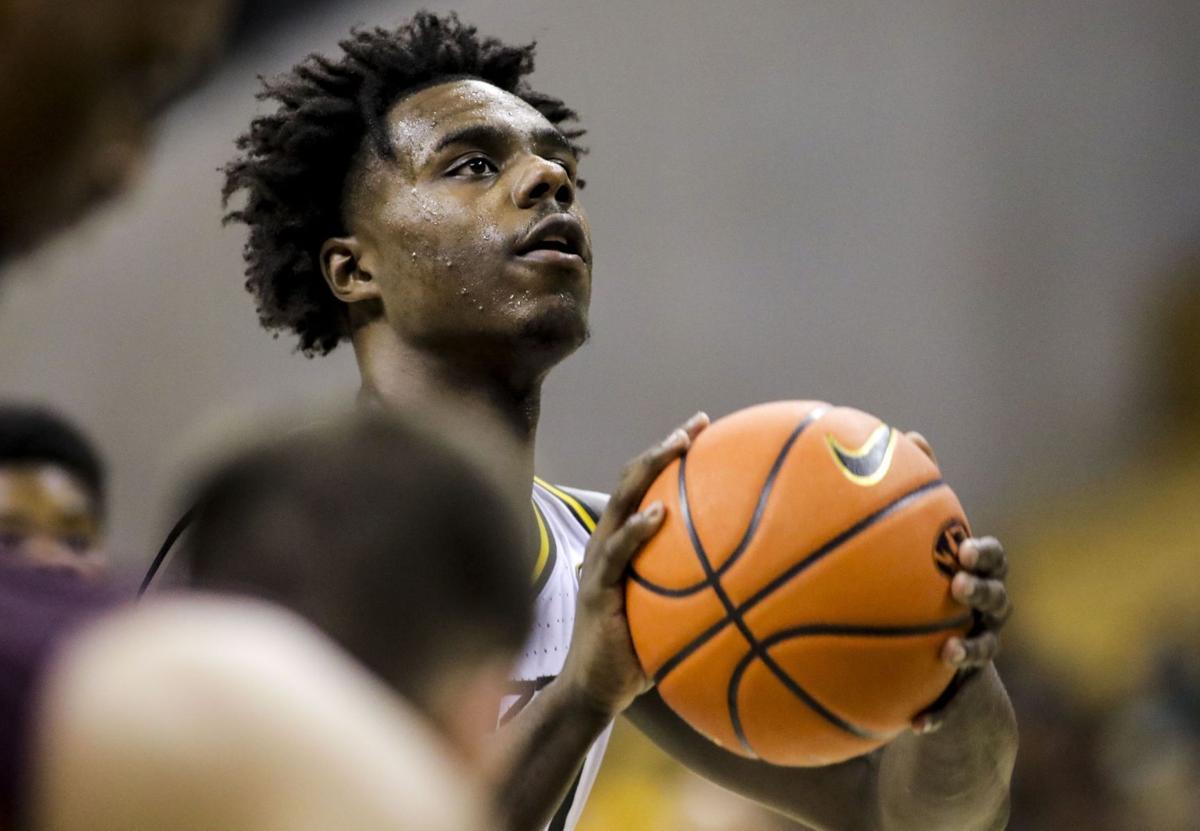 Missouri Tigers forward Kobe Brown (24) prepares to shoot a free-throw during the second half of a NCAA Men's Basketball game at Mizzou Arena in Columbia on Tuesday, Nov. 9, 2021. Mizzou defeated Central Michigan 78-68 in their season opener. Photo by Colter Peterson, cpeterson@post-dispatch.com

“We couldn’t get into an offensive flow,” Missouri coach Cuonzo Martin told reporters after the game.

Meanwhile Illinois is still figuring out how to replace all that guard Ayo Dosunmu did for them. The Illini sputtered, again, in a 71-51 loss to Cincinnati Monday.

“There’s no doubt we’re off-kilter on the offensive side,” Illinois coach Brad Underwood said in his postgame news conference. “We’re not playing with any confidence.”

So it goes in college basketball. From year to year, most teams must replace departed standouts.

Returning forward Kobe Brown is on that spot at Missouri and returning point guard Andre Curbelo is shouldering a much bigger role at Illinois. Thus far their results have been mixed.

Curbelo is surrounded by a talented and deep team, so he should be fine once he regains his legs. But Brown is going to need a lot more help if Mizzou is going to hold up in the Southeastern Conference this season.

The Tigers don’t have a natural point guard in their playing rotation this season, so Brown has assumed some of the playmaking duty as a point forward. He took charge in the second half of Missouri’s 80-75 victory over SMU Sunday when Boogie Coleman struggled to deal with ball pressure.

Because Brown typically draws a forward defending him, he can get the ball up the court and make plays from the top of the key off the dribble.

“He was aggressive, he was assertive,” Martin said. “He made plays, he was aggressive making plays. But I think there is a next step with him being more vocal and leading because he sees what’s going on.”

Missouri also lacks an established big man, so Brown has to play center when the Tigers go to a small lineup. He has the strength to body up on the defensive low post and box out for rebounds.

When Brown is not playing point forward or parking down on the block, he is out on the wing as a small forward or “stretch four” who can hit enough 3-point shots to set up his drives.

“When his three-ball is falling, he is extremely hard guy to defend at 6-8 coming downhill,” Martin said. “He can make plays. I think the biggest thing now for offensively is getting in the lane and jump stop to being able to make decisions and not getting out of control sometimes.”

Brown is not a high flyer, but he creates space for himself with his strength and he is developing an arsenal of below-the-rim shots in the lane.

He switches from role to role like an actor playing multiple parts in a movie. That went smoothly against SMU, when he scored 24 points and grabbed seven rebounds, but assuming that much responsibility in Missouri’s “positionless” offense will be a grind.

The Illini have lots of talent returning from last season’s powerhouse, but there is no Dosunmu in this group. Ayo had the length to defend well, the tenacity to rebound against bigger players and the heart to take over the offense with games on the line.

Curbelo is a much different player. He can create opportunities for himself and his teammates off the dribble. He lacks Dosunmu’s explosiveness but he can gain the lane with shifty moves, feed teammates with clever passes and make trick shots over leaping defenders.

He must work hard to survive at the defensive end, something Underwood has to remind him often. Sometimes his passes are a little too clever, resulting in turnovers.

And he suffered a sluggish comeback from a concussion, struggling 4-for-18 shooting with seven turnovers in the Illini’s 67-66 loss at Marquette.

“He wants to win before everything else,” Cockburn told reporters after that game. “Guys make mistakes. He’s not perfect. He’s human. It’s about keeping your head and making sure it doesn’t affect you going forward. What happens there, stays there. We lost the game. That’s one game down, move on to the next.”

Curbelo was slightly better against Cincinnati, making 4-of-12 shots from the floor and dishing five assists to go with five turnovers.

Earlier, Underwood preached patience with Curbelo as he scraped off some rust and adapted to his new lead role.

“It was nothing more than he just needs practice,” Underwood said. “He was out forever with a concussion. You just don’t come back from not practicing and not working on your game and not getting extra shots in the gym and losing your workouts and your routines. He just sat idle. He wasn’t even at practice most of those days. Our concussion protocol is that you go away. Just getting him back involved and in the mix was something that will help him, will help us. He’ll learn from it.”

If Curbelo can settle into his quarterback role and quit forcing things, the Illini should overcome Dosunmu’s exit to the NBA and produce another upper-tier Big Ten finish.

“You have to play in rhythm,” Underwood said Monday. “We’re not playing in any rhythm. We have too many guys trying to be heroes and make plays.”

Such is the challenge of replacing elite players.

Arenado and Co. are scrubbed from the Cardinals website: an empty gesture and a sign of the times

Hummel: Schwarber, Gorman or someone else for the Cardinals at DH next year?

Check out the highlights from our weekly chat with Cardinals fans.

Gordo: MLB owners, players need to see the value of working together

Today's sports world is changing fast, and MLB needs to keep up.

Everyone has an opinion on what to do with the money. Here's what elected leaders are saying, along with my two cents.

Thomas: What is the Blues' identity this season?

Jim Thomas gives some first-hand observations during a weekly chat with Post-Dispatch readers.

Missouri Tigers forward Kobe Brown (24) prepares to shoot a free-throw during the second half of a NCAA Men's Basketball game at Mizzou Arena in Columbia on Tuesday, Nov. 9, 2021. Mizzou defeated Central Michigan 78-68 in their season opener. Photo by Colter Peterson, cpeterson@post-dispatch.com