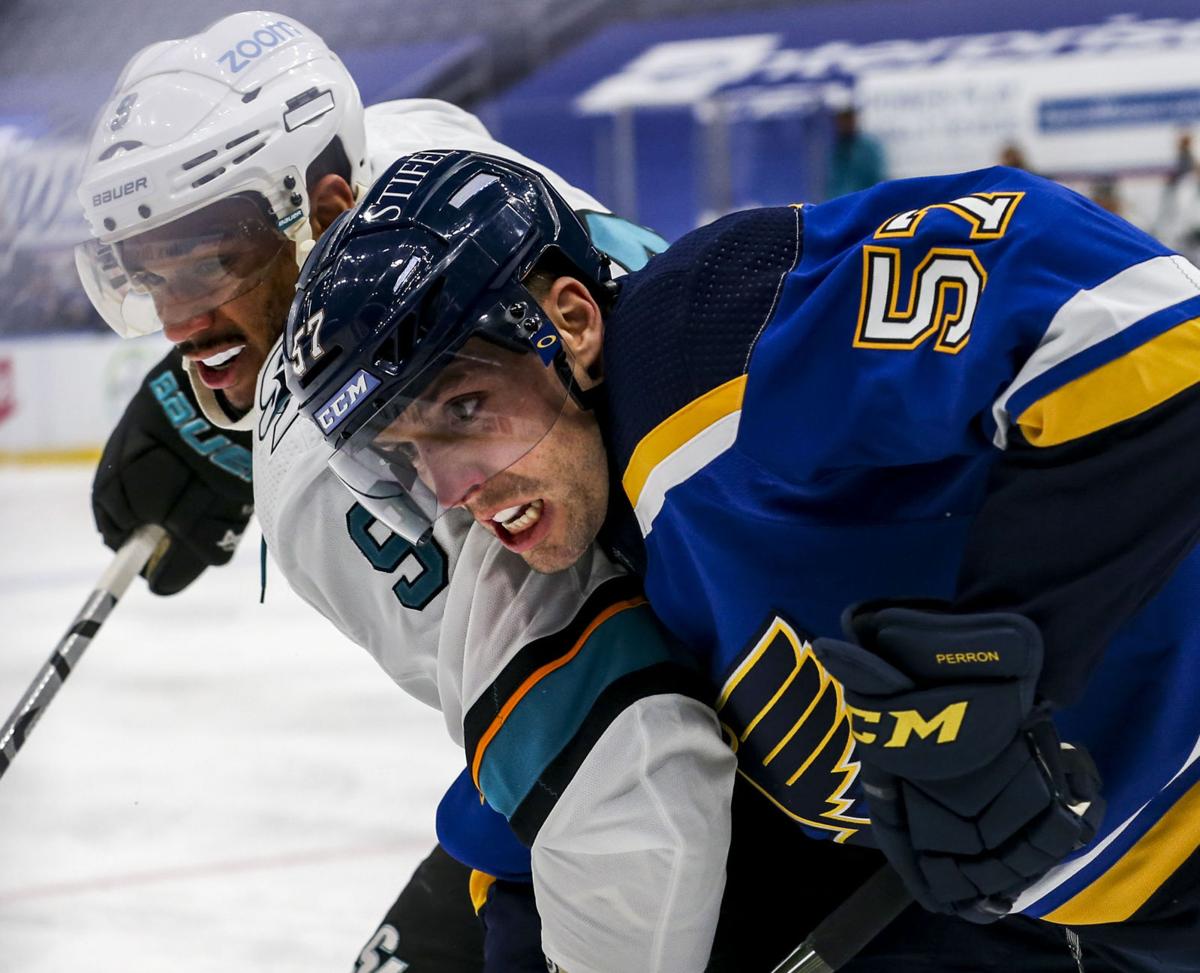 The Blues' David Perron, right, and San Jose Sharks' Evander Kane struggle against each other while chasing the puck during the first period of a game at Enterprise Center in St. Louis on Wednesday, Jan. 20, 2021. (Colter Peterson, cpeterson@post-dispatch.com)

How did we get to here?

In early April, the articles and columns about the Blues’ season read like obituaries. “Mayday,” if you will, came one month early. But now in early May, these things sure read with optimism, because the season soon will be affixed with the prefix “post.”

And while there have been different catalysts for the Blues’ comeback — the team had lost seven-straight games before returning to relevancy — but one must appraise and thus praise the play of David Perron.

In the past 11 games, Perron has 12 points — and he is plus-four. The Blues won seven of the 11 and also picked up a point in an overtime loss. Sure enough, that was the most-recent game, and Perron netted a goal that captured everything that defines David: He strategically battled for a puck to keep the play alive, he unapologetically camped in front of the net and he cleverly scored while falling near the crease. That was much to the chagrin of Kaapo Kahkonen, the goalie who complained to the ref after the play.

And while linemate Ryan O’Reilly is the Mick to Perron’s Keith, it’s Perron who currently leads the Blues in points. Perron has 49 and O’Reilly has 48. And while I couldn’t find this stat online, he must be among the league leaders in stick-to-it-ness. Perron is a persistent pest out there, a guy you love to have on your team and hate to play against.

The Blues, holding onto the fourth and final playoff spot in the West Division, have seven games remaining. So it’s quite possible that No. 57 could finish with 57 points. Though, the way things are going, Perron probably will end up with 56 — his point-per-game average is a point per game (remember, it’s 56-game season because of pandemic scheduling). That average isn’t average — it’s 20th-best in the entire National Hockey League, tied with the likes of Gabriel Landeskog, Nicklas Backstrom and David Pastrnak. For proper perspective — and to make your eyes pop — Connor McDavid leads the league with a preposterous 1.78 points per game.

When Perron is purring, usually the Blues are, too. When he’s struggling and committing ill-fated penalties, hopes are faded. In the Blues’ 23 wins, Perron has 31 points. In 19 regulation losses, he has 10 points. Lately, the winger Perron and center O’Reilly have been playing with the center-turned-winger Brayden Schenn,

“If we’re winning hockey games, it means the chemistry is there and we’re doing things right,” Schenn said in the Zoom conference after Saturday’s game.

Monday’s home game against Anaheim is extremely important for the team, but could be historic for Perron personally. The confluence of accomplishments that could happen is pretty crazy. So, he’s set to dress in his 900th career game and, sure enough, his 600th for St. Louis. A rare thrice-time Blue, Perron will become just the 14th player in franchise history to play 600 games with the note on his sweater.

Oh, and he’s got 399 career points with the Blues.

So one point Monday (or later) would put Perron in particularly rare air. Only eight players have ever played 600 or more games with the Blues and tallied 400 or more points with them: Bernie Federko, Brian Sutter, Alexander Steen, Alex Pietrangelo, Brett Hull, Garry Unger, Al MacInnis and David Backes.

Sure enough, Perron’s former linemate Backes is on the Anaheim Ducks.

Perron is on quite a hot streak. And his points lately have been timely tallies.

On Wednesday, for instance, the Blues trailed 3-1 in the third period. But on a power play, O’Reilly won the faceoff. Incidentally, do you truly realize how good O’Reilly is at winning faceoffs? Quite. So, O’Reilly won the faceoff and the Blues worked the puck around to Perron on the left wing. His horizontal pass split two defenders, split the slot and hit Mike Hoffman’s stick near the right dot for the shot.

One night later, Perron again made another beautiful assist on the power play. This time, it was a one-time pass with perfect touch, feeding O’Reilly for a power play goal. This put the Blues up 4-2 in a game they’d win in overtime, thanks to a goal by . . . O’Reilly (the Blues’ captain finished April with 10 goals, fourth-most in the NHL).

That three-game trip to Minnesota might’ve saved the season. The Blues snagged five of a six possible points in a very tough place to play, while creating a cushion between themselves and the Coyotes.

The Blues come home with some swagger in their bags. Their recent puck possession, overcoming injuries, coolness under pressure and standout play by goalie Jordan Binnington has shades of 2019. It should make May fun. And David Perron is sure stirring things up, yet again.

The Blues' David Perron, right, and San Jose Sharks' Evander Kane struggle against each other while chasing the puck during the first period of a game at Enterprise Center in St. Louis on Wednesday, Jan. 20, 2021. (Colter Peterson, cpeterson@post-dispatch.com)