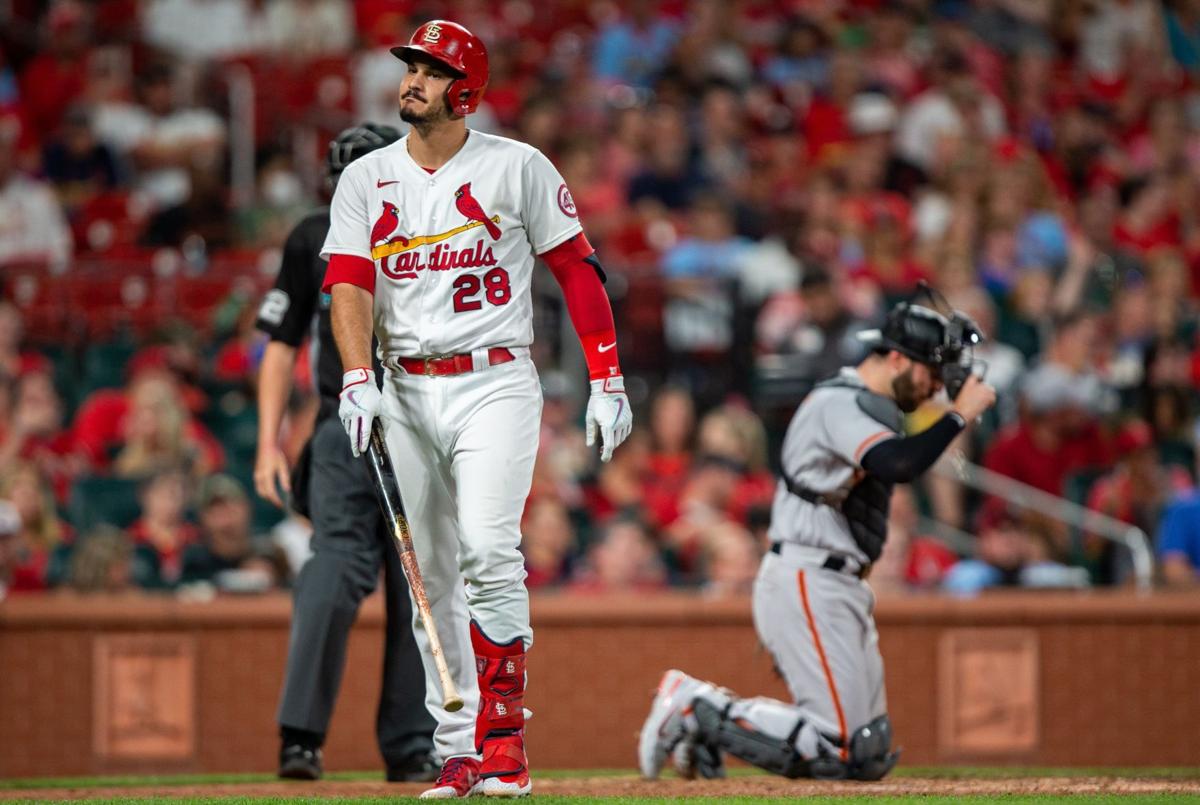 Cardinals third baseman Nolan Arenado shakes his head after striking out swinging against San Francisco Giants relief pitcher Dominic Leone in  the seventh inning of a game at Busch Stadium in St. Louis on Friday, July 16, 2021. The Cardinals lost to the Giants 7-2. (Daniel Shular, dshular@post-dispatch.com)

The Cardinals' Nolan Arenado, shaking his head after striking out Friday, has just two hits and no RBIs in the past five games.

To the casual fan at Busch, scattered under the Sunday sunshine, this game might’ve felt like just another game, a nice win to wind down the weekend. And maybe even some Cardinals themselves wouldn’t make too big a deal about winning this singular game. But this game was a pivotal game, a win they needed in order to keep this season’s trajectory, you know, going.

If they had lost Sunday, they would’ve thus lost the series to the Giants. And they would’ve been 10 games — daunting double digits — behind the first-place Brewers. The Cardinals would’ve come out of the All-Star break losing their first series, the trade deadline nine games away. Oh, and they have some unproven starters going in the next series. Oh, and the Cards can’t hit much.

But their victory Sunday kept this season afloat. For the time being. Their pivotal 2-1 win gave them the series win, also 2-1. You hear a lot about the pending return of Miles Mikolas and Jack Flaherty, the easy schedule in August and the 13 total games remaining against Milwaukee. The win Sunday allowed the Cards to inch closer to these opportunities; losses could make them opportunities lost.

And the victory Sunday was part strategy, part scrappy.

As for the strategy, starter Wade LeBlanc pinpointed pitches in nooks of the strike zone that batters didn’t know were there. And while the Cards’ bullpen has some issues, it also has some grit, as seen in Ryan Helsley, Genesis Cabrera, Giovanny Gallegos and Alex Reyes. And the scrappy play, of course, is appreciated by the Cardinals faithful who use the “S” word to coronate fan favorites. And we sure saw some scrappy play from Harrison Bader, whose excuse-me RBI single sent him gloriously soaring toward the first-base dirt, as the Cardinals reached “paydirt” with a score.

They needed the win and got the win. What did the win say about this team?

“We think this team can play with anybody,” Cardinals manager Mike Shildt said. “We can. San Francisco is a nice club, they’ve got the best record in baseball. We respect our opponent, clearly prepare for our opponent, we’re aware what they’re doing and we know what to expect and how we’re going to compete. But ultimately, it really is about how we play. It’s as simple as that. A lot of nights, really, ultimately, it’s the Cardinals vs. the Cardinals. And what you saw was some really good pitching, guys executing some tough pitches, you saw a lot of guts out there and a lot of heart. . . .

“If we play the way we’re capable of, it really doesn’t matter who we play, we just need to make sure we don’t give anything away — as little as possible — and take everything that’s out there.”

Still, they’ve got to a least score some runs to win these games. Scored seven all weekend. It seems, this season, either the Cardinals don’t routinely hit with runners in scoring position (.246, 10th in the National League) or they don’t get runners there to begin with (the Cards’ .230 batting average is 13th out of 15 NL teams, and the Cards’ OPS is 12th at .680).

The Cardinals’ offense is confounding. Since May ended, it’s like the only people hitting are Paul Goldschmidt, Tyler O’Neill and “One Other Guy.” Sometimes that guy is Nolan Arenado, other times it’s Dylan Carlson, and this time it’s Paul DeJong. But it’s never the same guy for a long period of time — and it’s only one “One Other Guy” at a time.

After Sunday’s game, Post-Dispatch sportswriter Rick Hummel asked Shildt if he envisions a day when Goldschmidt and Arenado will be hot at the same time. The skipper said, “It’s like the premiere of a movie — it’s coming soon to a ballpark near you.”

How about Busch Stadium, like, Monday? The Cards then begin a four-game series against the Cubs, who have the same 46-47 record, but already have traded one regular player and could trade more. The Cards have to win this series, they need to win three of four.

The Cards say they’re not sellers, the Cards say they can be contenders? Well, prove it by beating a likely seller, a slipping team that’s there for the pouncing. The win in Sunday’s pivotal game was the first test. Now it’s time to pass the next one.

And they’ll need Nolan. He was sublime in the series at San Francisco before the break, and that kind of broke things up. But the reality is, the few weeks before that series — and his five games after — have been awful. He’s flying out a lot. In the past five games, he has two hits. And not one run batted in. Of course, he helped carry the Cardinals through many stretches this season. But his OPS now actually is in the “sevens” at .795. Colorado Rockies third baseman Ryan McMahon has a .792 OPS.

This Cardinals’ season was built around Arenado’s addition. You can make the case that the Cards should have made more additions — especially midseason with pitching — to supplement the team trying to win its division. But Arenado himself needs to contribute soon, if not sooner.

As for the Cardinals’ current “One Other Guy” hitting lately, credit goes to DeJong for rediscovering his swing. In the past 15 games, he has an OPS of 1.109 and four homers. But in 2021, it’s hard to get excited about a Cardinal getting hot offensively, because the track record says it’s unsustainable.

Now go win the next series.

Cardinals third baseman Nolan Arenado shakes his head after striking out swinging against San Francisco Giants relief pitcher Dominic Leone in  the seventh inning of a game at Busch Stadium in St. Louis on Friday, July 16, 2021. The Cardinals lost to the Giants 7-2. (Daniel Shular, dshular@post-dispatch.com)

The Cardinals' Nolan Arenado, shaking his head after striking out Friday, has just two hits and no RBIs in the past five games.