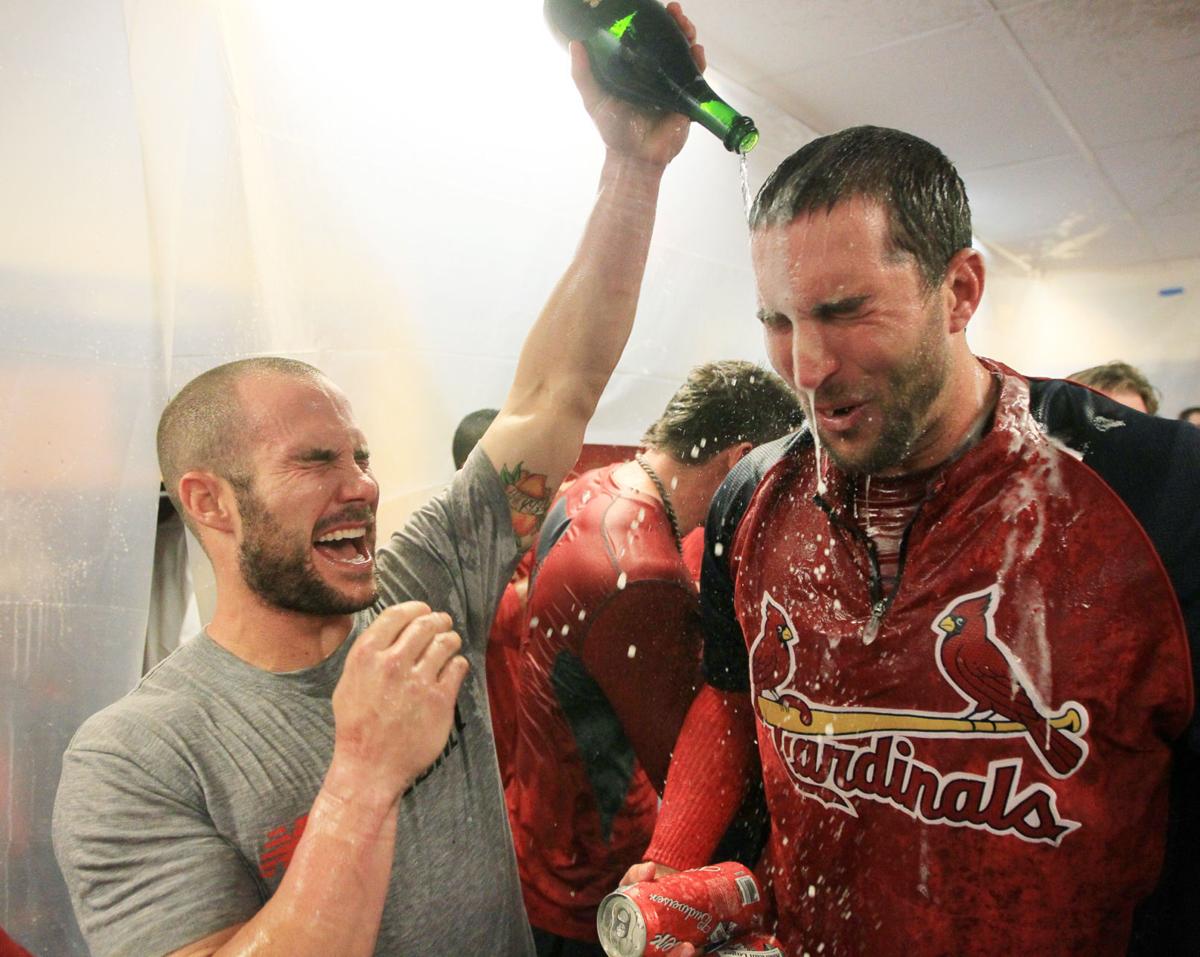 The Cardinals' Skip Schumaker pours champagne on pitcher Adam Wainwright in the clubhouse after Game 5 of the team's National League Division Series against and the Philadelphia Phillies on Friday, Oct. 7, 2011, at Citizens Bank Park in Philadelphia. The Cardinals won the winner-take-all game 1-0, behind Chris Carpenter's complete game. Post-Dispatch file photo by Chris Lee

The Cardinals' Skip Schumaker pours champagne on pitcher Adam Wainwright in the clubhouse after the Cards beat the Phillies 1-0 in the decisive Game 5 of the 2011 National League Division Series in Philadelphia. Teammate Chris Carpenter pitched a complete game.

I’m intrigued by Skip as the skip.

Yes, many will argue that the next Cardinals skipper should come from the Cardinals’ staff, in efforts to continue that continuity. And the Cards do have numerous coaches whose “logical next step” in coaching is becoming a big-league manager. But when Jared Michael Schumaker was bestowed long ago with the nickname Skip, it might’ve also been an omen.

He was born with a magnetic personality — an attribute that no sports specialist can teach — and built himself into a ballplayer beloved by both the St. Louis Cardinals and St. Louis. Schumaker, 41, was the associate manager of the Padres this season. Here’s hoping he gets serious consideration to be the manager of the Cardinals for next season.

“Skip is a guy that moves the needle,” former Cardinals teammate Daniel Descalso said Sunday. “He makes people around him better. You want him in your dugout. . . .

“Skip taught me what it meant to be a professional at the big-league level. He’s one of the most impactful teammates I’ve ever played with. He showed me how to prepare, compete and do whatever it takes to help the team win, night after night. I know he attacks his role as a coach with the same passion.”

John Mozeliak, the president of baseball operations, was part of the Cards’ brass that drafted Schumaker in 2001. As “Mo” grew in the Cardinals’ front office, Skip grew as a ballplayer, a fifth-round pick who debuted in 2005. Schumaker played some of the 2006 season with St. Louis, though not the postseason.

But Schumaker was an integral part of the next Cards’ club to win the World Series, the storybook 2011 team. By then, Mozeliak was the boss. And he remains the boss, a title perhaps never more asserted than with his abrupt firing of Mike Shildt last week. So, “Mo” knows what he wants in a skipper. And “Mo” knows Skip quite well.

Schumaker has an “it” factor. We hear about that a lot with quarterbacks. Sometimes you cannot pinpoint what “it” is, but the dude exudes a demeanor that makes him a standout anything, be it teammate or mentor, leader or dutiful follower, depending on the circumstance. Skip’s got “it.”

He’s got the personality that can navigate a clubhouse and navigate a season. Redbirds legends such as Mark McGwire, Adam Wainwright and Matt Holliday were just drawn to him, and vice versa. Here’s what Holliday told the Post-Dispatch in 2012, after Skip was shipped to the Dodgers: “I understand it’s part of the business. That doesn’t make it any easier when it’s one of your best friends. . . . Guys like Skip can’t be appreciated like they should (be) based on the stat sheet. Skip was a big part of the Cardinal swagger when I got here.”

Working in the Padres organization the past six years, Schumaker has held different roles and earned the trust of players and coworkers. If he took over in St. Louis, he would bring an institutional knowledge of what it means to be a St. Louis Cardinal. That’s everything from fundamentals and scrappiness, to understanding the philosophies of the front office and farm system, to an appreciation of club history.

And, of course, he was a history-maker himself. First, he helped the Cards reach the playoffs in 2009 — after missing October in 2007 and 2008 — by selflessly moving from outfield to second base. And then, Schumaker was an important ingredient in the gumbo that was the 2011 team. Numerous players from the World Series champs spoke (and speak) highly of Schumaker, this hilarious, down-to-earth yet quite insightful teammate.

When he hit the Father’s Day walk-off homer in 2011, his teammates mobbed him at home plate, while Dan McLaughlin said on the television broadcast: “There is not a more well-liked guy on this team than No. 55.”

Naturally, some might scoff at the fact that Skip never has managed. Well, first of all, it’s unlikely that the next Cardinal skipper will have managed in the majors before — be it Skip, Stubby Clapp, Oliver Marmol, Joe McEwing or even Holliday himself.

Second, we’ve seen numerous first-time managers thrive in the majors this past decade.

And third, the position of manager has changed in the past decade or two. The best managers don’t consider themselves kings, but instead members of a democracy leadership that includes front office executives and trusted analytics gurus.

It is safe to say that whomever “Mo” hires will consider himself the latter, especially because Shildt made it to October, yet lost his job in October because of “philosophical differences.”

Skip Schumaker was a winning player with a winning personality. He should get a shot to interview for skipper. And if so, I bet he’d win the interview.

“Skip will be a manger in the big leagues, whether it be this year with the Cardinals or Padres or another team in the future,” former teammate Brad Thompson said Sunday via text. “He’s a great leader. Always has been. As a teammate he would do anything for you. In a game where personnel success leads to riches, Skip truly cared about the team’s success.

“His commitment to doing whatever he could do to help the team win — and really focusing on the little details of the game — made him a great teammate and will make him a fantastic manager, whenever the time comes.”

Hummel: Schwarber, Gorman or someone else for the Cardinals at DH next year?

Check out the highlights from our weekly chat with Cardinals fans.

Everyone has an opinion on what to do with the money. Here's what elected leaders are saying, along with my two cents.

BenFred: Should we worry about national view of the Rams lawsuit now that the nation is finally paying attention?

Goold: What free-agent pitchers might the Cardinals be considering?

Thomas: Are the Blues just mediocre? Let's wait and see.

Jim Thomas gives some first-hand observations during a weekly chat with Post-Dispatch readers.

The Cardinals' Skip Schumaker pours champagne on pitcher Adam Wainwright in the clubhouse after Game 5 of the team's National League Division Series against and the Philadelphia Phillies on Friday, Oct. 7, 2011, at Citizens Bank Park in Philadelphia. The Cardinals won the winner-take-all game 1-0, behind Chris Carpenter's complete game. Post-Dispatch file photo by Chris Lee

The Cardinals' Skip Schumaker pours champagne on pitcher Adam Wainwright in the clubhouse after the Cards beat the Phillies 1-0 in the decisive Game 5 of the 2011 National League Division Series in Philadelphia. Teammate Chris Carpenter pitched a complete game.