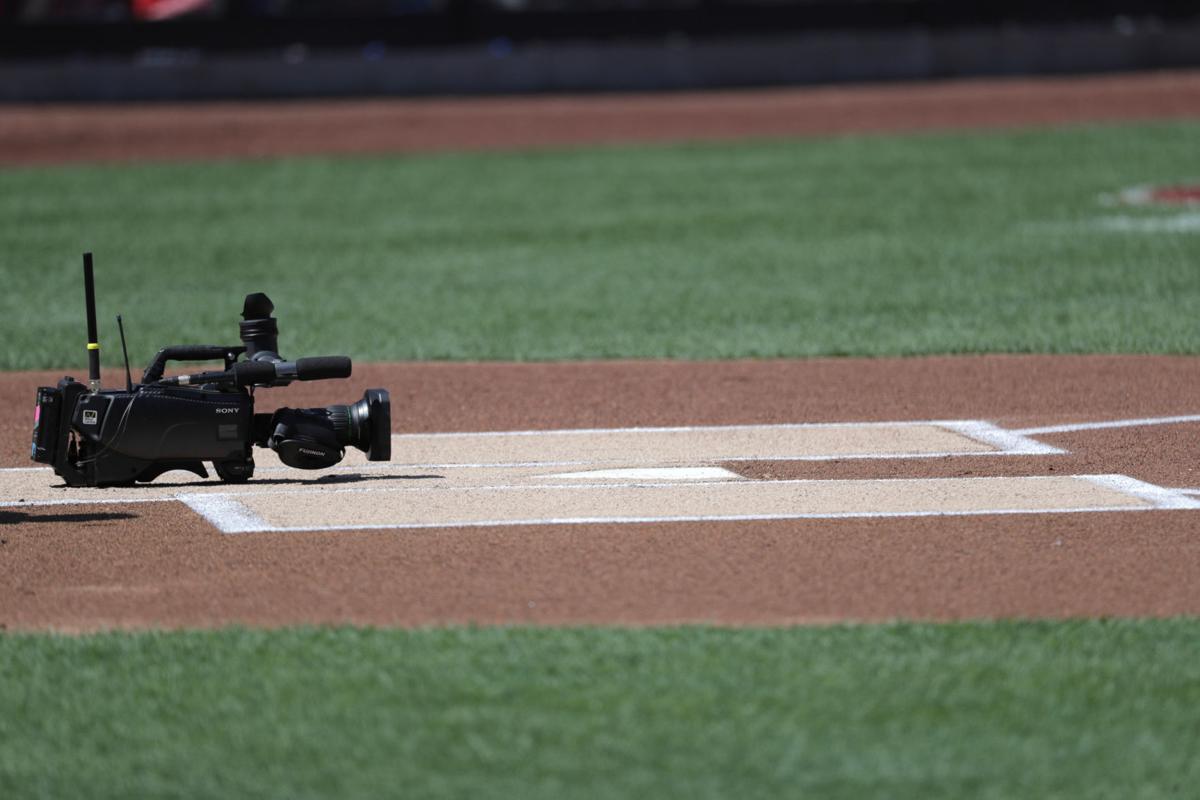 A television camera sits behind home plate prior to a baseball game between the New York Mets and the Washington Nationals, Saturday, April 6, 2019, in New York. (AP Photo/Julio Cortez)

If you aren’t jumping into the stream, you’re headed to dry dock as far as your customary wide array of sports-viewing options are concerned.

Streaming services have gained immense popularity in recent years, and continue to grow — NFL and NHL games are headed there under recently struck contracts. And next week a Cardinals game is being shifted from Bally Sports Midwest to YouTube, the first time in two seasons such a move has been made with a Redbirds contest.

Their game on Thursday, a 12:40 p.m. contest in Milwaukee, will be available only on the aforementioned video streaming service. It’s part of YouTube’s deal with Major League Baseball to exclusively show 21 games this season, and the Cardinals could end up there again — the YouTube weekly schedule has been announced only through May.

It’s the third straight year YouTube has had such an arrangement, following a similar streaming deal Major League Baseball had with Facebook the previous season. MLB wants to make some games available to people who do not subscribe to cable TV, a rapidly growing audience.

But while these YouTube contests are offered for free, they have angered some fans — especially older ones — who either do not have internet/smartphone service or are confused about how to access the games. Conversely, they will be a bonus to those whose programming provider has dropped Bally Sports Midwest.

Two Redbirds contents each in 2018 and ’19 were exclusively on Facebook or YouTube. None were affected last year, when YouTube had just four contests in the coronavirus-condensed season.

But the ones that were switched previously sure drew attention. A sampling of comments posted during one of them:

“My 94 year old client is upset he (doesn’t) have (a) computer or smart TV!!! So wrong to take game of(f) air for your long-term fans who are not technological updated.”

“We’re a retired couple in our 80s. We pay extra to receive all the Cardinal games on TV. Now they take our games away and sell to Facebook. Very unfair!”

The news this week that the NFL is moving “Thursday Night Football” almost exclusively from television to a video streaming service a year earlier than originally scheduled is the most powerful statement to date about how a lot of sporting events will be delivered in the future.

Athletics quickly are catching up with the shift of general programming from long-established stations to streaming outlets such as Netflix, Hulu, Amazon, HBO Max, etc. Of course, there is a price to pay for viewers. None of those services are free.

The coming season will be the last for the foreseeable future that the NFL Thursday night package will be on network TV. The league’s deal with Amazon Prime Video for streaming rights that was announced in March was amended this week, starting it a year earlier. Amazon is buying out Fox’s/NFL Network’s rights for ’22 and its deal now will run for 11 years, instead of 10, and reportedly be worth about $11 billion to the league for 15 games annually. Amazon has been streaming some Thursday games since 2017, in addition to the traditional coverage, but will be the sole national provider beginning in about 16 months.

The only conventional TV coverage that is to take place for the package will be in the markets of the competing teams. As has been the case with contests shown on ESPN, the league is mandating that Amazon place those contests on over-the-air television in those cities.

The traditional NFL season-opening game, on a Thursday night, and the Thanksgiving night contest are not included in the Amazon package. They will remain on NBC. Also unaffected are the Sunday telecasts, which will remain on CBS and Fox in the daytime and NBC at night. “Monday Night Football” stays on ESPN, with some games also to be shown on ABC. And the Super Bowl remains on over-the-air TV for the next decade plus.

So the Amazon portion of the NFL’s new broadcasting contracts was by far the biggest change.

“This is a seminal moment for the distribution of our content,” NFL commissioner Roger Goodell said when the arrangements were announced in March. “These deals remind me of back in the ’60s, how NFL content and games were a big part of the broadcast TV growth, and then going into the ’80s, with our first commitment to cable television, and then the ‘90s with our commitment to satellite television and our Sunday Ticket package. I’m sure we’re going to look back on these deals the same way.”

The NFL/Amazon Thursday marriage is just the latest major move of programming from free or cable TV to streaming. Two months ago, the NHL announced that it was selling much of its national TV rights to ESPN, which will exclusively stream 75 regular-season games annually on ESPN+ and Hulu. Those are properties of ESPN owner Disney. Then last week, the NHL said it is selling the other part of its U.S. television rights to Turner Sports, a division of WarnerMedia.

“This deal reflects the reality of what the media worlds looking like now,” NHL commissioner Gary Bettman said when the ESPN deal was struck. “Everybody knows that cord-cutting and streaming platforms are growing dramatically. This is an opportunity for our younger fans to give them what they want on the places where they go for content.”

The NHL had been on NBC/NBCSN for years, but that relationship ends after this year’s Stanley Cup Finals.

Beginning next season, Turner will show its portion of the package on TBS and TNT. But WarnerMedia news and sports chairman Jeff Zucker recently said there are no immediate plans to put any games on popular Warner streaming property HBO Max or Bleacher Report, also owned by the company.

“What we’re excited about in this deal is that we have that flexibility and optionality,” he said. “But it’s not imminent and it’s not going to happen this year, in this calendar year. Our emphasis in the year ahead will certainly be on TNT and TBS. In the years to come, I think you’ll see HBO Max and those digital platforms be a different part.”

Others also have jumped into the stream.

NBCUniversal’s Peacock streaming service made its debut last July and has several tiers, ranging from free content to about $10 monthly. Among its sports offerings, European soccer, pro wrestling, IndyCar coverage are staples. It also could end up with a lot of programming now on NBCSN (other than the NHL). That network is being discontinued at year’s end.

ESPN president Jimmy Pitaro left little doubt about the future in a succinct comment to the New York Times when his company’s deal with the NHL was announced.

“Streaming is really at the heart of this deal,” he said.

Or, as former Washington Redskins coach George Allen liked to say: “The future is now.”

• Smart TV: Launch the YouTube app, search for MLB. Then select the MLB channel, click "live game" and it should appear.

• Computer: Go to youtube.com and search for MLB. Game should be playing there.

• Smart phone: Open the YouTube app and search for MLB. Select the MLB channel and the game should be the first video available.

Goold: Pitching crisis has jeopardized the Cardinals trade leverage and Liberatore's shot at a gold medal

Questions about the Cardinals rotation and bullpen dominated the weekly chat with Post-Dispatch readers.

BenFred: Time for Cardinals' front office to prove roster improvement doesn't have to wait until offseason

Many teams will get the chance to blame a lost 2021 season on injuries. The Cardinals shouldn't be one of them.

BenFred: Time to turn up the heat on Maddux? Cardinals pitching woes and potential trade targets dominate this week's chat

Could a Mizzou hall of famer - no not that one - bolster the Cardinals pitching staff this season and beyond?

The Cards' next game is Tuesday — and they haven’t won a game since last Tuesday.

Because the Cardinals have enjoyed such consistent success, the front office can maintain the long view on things.

Should the Blues dangle Robert Thomas? The upside and the down to that idea

Tom Timmermann looks at the roster jockeying during our weekly chat with Blues fans.

Dave Matter warns that it would be naive to believe the program has passed the likes of South Carolina, Arkansas and Kentucky in terms of SEC pecking order.

McLaughlin: "There is no substitute. None" for being on hand.

A television camera sits behind home plate prior to a baseball game between the New York Mets and the Washington Nationals, Saturday, April 6, 2019, in New York. (AP Photo/Julio Cortez)