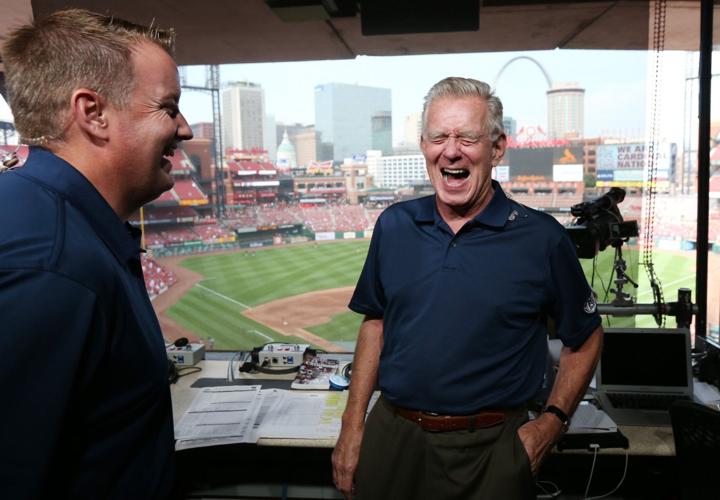 Tim McCarver, right, says he thoroughly enjoyed concluding his broadcasting career by calling Cardinals games with Dan McLaughlin. They have a laugh before a game in 2014. (Post-Dispatch file photo by Chris Lee) 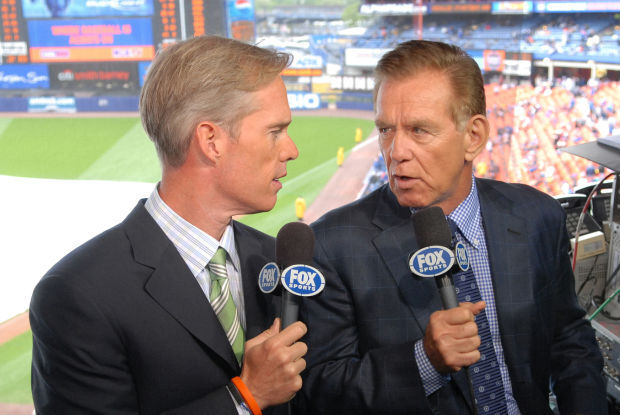 It’s now official. One of the legendary careers in baseball broadcasting — all of sportscasting, for that matter — has ended. Tim McCarver, who was the television analyst for more World Series than anyone — 24 — and a fixture on the air for decades, is retired from the business.

The acknowledgement by McCarver, who spent the final six years of his unparalleled run in the booth covering the Cardinals for what now is Bally Sports Midwest, comes three seasons after he called his last game. In the interim, he had been in limbo during the height of the coronavirus pandemic.

“I think I’m happy about it,” he said of putting down the microphone. “I think that’s the best.”

McCarver, now 80, was at his best for decades and worked for all four major American commercial broadcast networks. ABC, NBC, CBS, Fox. You name it and he was on the call for the big games. His final fling on the national stage came in 2013, when he called the Cardinals-Red Sox World Series with Joe Buck — his partner for 18 years.

“There will never be another one like him,” Buck said that season. “I personally think it’s a tougher analyst job than in the NFL, NHL, NBA. Because of that it’s the hardest role to fill. He’s done it forever, and there’s a reason why — it’s not that easy.”

Buck was just 27 when he did his first World Series, with McCarver in 1996, when Buck’s elite sportscasting career was just starting. They grew close, and in fact, Buck once said he learned more about broadcasting from McCarver than from his dad, legendary Cardinals and national announcer and one-time McCarver partner, Jack Buck.

“I leaned on him more than I’ve ever leaned on anybody,” Buck has said. “When you’re that young, you’re kind of fearful of being exposed as some fraud who shouldn’t be doing it. ... The instant credibility he gave me as a kid when I was doing these World Series games, ... that was invaluable to me and for me. Without that, if he had been picking at me or not accepting my opinion, it would have shot me down before I got started.”

As they signed off at the end of that 2013 Series, Buck saluted his departing partner.

He insisted then he wasn’t retiring, and didn’t.

McCarver joined the rotation of analysts on Cards telecasts and was set to come back for a seventh season in 2020 before the pandemic hit. When the truncated season finally began, he was under doctor’s orders not to travel, and because he lives in Florida all his assignments would have been on the road — Cards away games were broadcast from a St. Louis studio. That again was the case last season.

This year, the show is to go back on the road now that the virus has subsided, but the determination has been made to reduce the number of analysts in the BSM booth to two — after having five as recently as four seasons ago. While at times it was refreshing to hear many voices with different perspectives, the spinning carousel led to a lack of a consistent flow between play-by-play broadcaster Dan McLaughlin and the analyst du jour. Now only Jim Edmonds and Brad Thompson will take turns in that role.

“We feel like they both do good work and earned their opportunity,” Bally Sports Midwest general manager Jack Donovan said. “Both work really well with Dan.”

Ricky Horton, who has moved full time to radio now that Mike Shannon has retired, and Rick Ankiel are other BSM game commentators from recent seasons who are not be back in that role. But they will be involved in some pre- and postgame shows, as will Al Hrabosky. McCarver will not.

“The pandemic really changed how we operate,” Donovan said. “We had the highest ratings in baseball (last season); we like what we have.”

He also liked the association with McCarver, calling him “one of the greatest of all time. We really enjoyed him having his with us as part of our lineup for six years.”

McCarver’s broadcasting marathon began in 1980 with the Philadelphia Phillies, after he retired as a player, then stretched across four decades in which he shined with candor and insight.

That followed a stellar playing career in which he was a stout catcher who was a key member of three Cardinals World Series teams, including two champions, in the 1960s. He then went to Philadelphia, where he was Steve Carlton’s chosen battery mate during some of Carlton’s monster seasons. He also had stints with Montreal, Boston and the Cards again.

Then it was on to broadcasting, having local roles with the Phils, Mets, Giants and Yankees before the Cardinals. But it was the national stage on which he made his biggest mark. He was on the air for 34 seasons and called postseason baseball on network television for 29 consecutive years, including 24 World Series. He also did 22 All-Star Games, all records for a commentator. And in 2012, he won the Ford Frick Award, ushering him into the broadcasters section of the Baseball Hall of Fame.

How does he look back on all of these accomplishments, on and off the field?

“I’ll weigh that in the future,” he said, poo-pooing any suggestions that he has done something special. Told that it sounded as if he was being modest, the man from Memphis had a saucy comeback: “A man of my means has to be modest.”

While his broadcasting days are over, McCarver is not done with baseball and plans to be at the Cardinals’ opener next Thursday, when he will be introduced with others in the team’s Hall of Fame.

“I’m not retiring (from activities) by any stretch of the imagination,” he said.

McCarver had a fitting end to his career.

“I enjoyed it very much,” he said of wrapping up his broadcasting days by covering the Cardinals, the team with which he broke in to the big leagues in 1959 — and now officially had his last broadcast 60 years later. “It was special.”

He was refreshingly outspoken, not afraid to criticize the team he was covering. It was objective commentary, not ranting and raving, and the audience often would discover something about baseball they did not know. That trait included his Cardinals years, alongside McLaughlin.

“To have the chance to work with Tim has been one of the top highlights of my career,” McLaughlin said. “In my mind, he’s the best baseball analyst that has ever done that job. He made you think, he was a great storyteller and he was never, ever afraid to say what he thought. He’s the John Madden of baseball, and his resumé speaks for itself.”

“Dan McLaughlin is one of the great guys in our business,” McCarver said. “I can’t say enough good things about him.”

McLaughlin said that being the final partner of a guy who worked with some of the biggest play-by-play names ever “is humbling.

“I truly believe that the games we did together were some of the best TV games that Cards TV has ever had,” McLaughlin said. “I really felt when he was added to the Cardinals games, it was important to bring him back into the family. The Cardinal family. Remember, there were generations of fans that knew him as a player. Also, there were generations of fans that only knew him as a broadcaster on the biggest games. So it was important to me to draw on his enormous wealth of Cardinals knowledge and experiences and to bring it out in a light that maybe people weren’t accustomed to. I’m really proud that we did that and then some. I thought it was a special pairing.

“I hope fans understand and don’t take for granted how lucky we were to have Tim in the booth. There will never be another baseball analyst like him. Ever. He always made you think. He did it with a style that was unique. He wasn’t afraid to take a chance and more times than not he was right. He did it all with class.”

Watch now: What the Blues must do to avoid a Game 7 against the Wild

Watch now: What the Blues must do to avoid a Game 7 against the Wild

Tim McCarver, right, says he thoroughly enjoyed concluding his broadcasting career by calling Cardinals games with Dan McLaughlin. They have a laugh before a game in 2014. (Post-Dispatch file photo by Chris Lee)