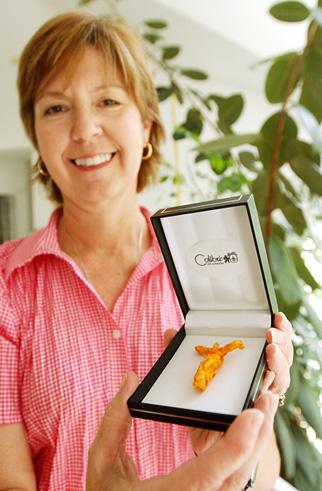 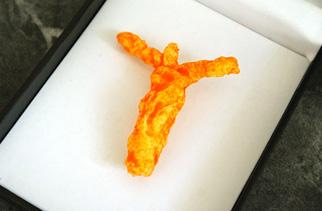 The fact that Kelly Ramey discovered a Cheeto shaped like Jesus on the cross has brought her at least 15 minutes of fame.

That she has found herself the subject of news reports across the nation has shocked her and is the reason for this story.

Here are the basics. On July 22, Ramey, 50, who lives in unincorporated northern Jefferson County, was driving home after riding horses. She stopped for a snack at an area convenience store and chose a small bag of Cheetos.

"I was eating while I was driving," she recalled. "I don't know why I didn't just eat it.

"When I took the Cheeto out, it felt different. So, I looked at it and it immediately came to mind it was Jesus on the cross."

She sought verification from others that the Cheeto, indeed, resembles Jesus on the cross.

"I brought it home to show my husband and my daughter to see what they thought," she said. "My husband is hilarious and a skeptic and he thought it looked like Jesus.

"He took it to work and everybody there thought it looked like Jesus."

Ramey's daughter, Michaela, agrees with the others.

People who see it up close have displayed a variety of reactions, according to Ramey.

"When we show it to people, some will laugh until they cry."

At some point, Ramey decided to contact the FOX 2 (Channel 2) television news department and that station aired a story on her and her Cheeto.

Since then, news outlets from all around the country have contacted Ramey to have her tell her story.

"This has been fun," she said. "I couldn't believe the news would come. First, we contacted FOX 2 news and it was on the 5 o'clock news.

"Now, we're getting calls from everywhere. It went on FOX affiliates across the nation. It was on ABC news, MSNBC. It was right where you pull up the Yahoo! Web page. I've done radio in Iowa and I'm doing San Diego tomorrow."

Ramey said she sees significance in the Cheeto.

"I am a spiritual person. I'm Catholic. I pray every day. I believe in God.

"I feel, in my heart, it has to do with reminding people of joy, laughter and paying attention to the little things in life."

Ramey, who works in information technology, is keeping her Cheeto in a safe deposit box and is considering ways to safely display it to the public.

"I would display it in a public place. I don't know where or when."

She said she is glad she went public with her story.

"It's most definitely been a pleasant experience," Ramey said. "Everyone I show it to, you see a smile on their face. It's something worth sharing."