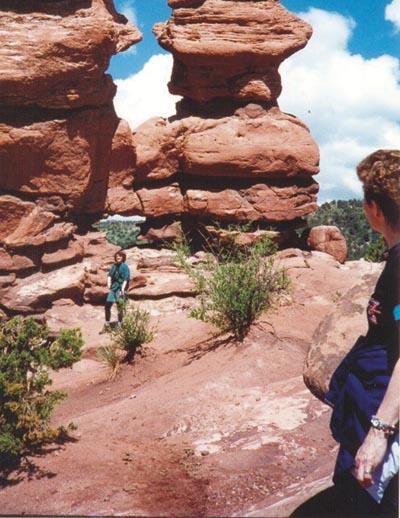 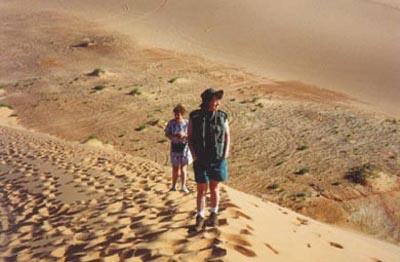 In June we decided to spend one week with our daughter in Colorado and another week in Utah visiting the national parks we were unable to visit on a previous trip.

One of Carolyn's favorite spots to hike was in the Garden of the Gods Park, so we stopped there briefly for a self-guided hike. The park was dedicated in 1909 and contains 1,340 acres and is free to the public.

It is a photographer's dream and is best known for its magnificent red sandstone rock formations. Many of these are more than 300 million years old and were sculpted through time by erosion. The contrast between the red rocks and the deep blue sky was exceptional.

One afternoon Don and I visited the Cadet Chapel at the U.S. Air Force Academy in Colorado Springs and prayed in three separate chapels (Catholic, Protestant and Jewish) that Carolyn would return to St. Louis. We wanted to cover all the bases.

We then drove to Rocky Mountain National Park and followed Trail Ridge Road, a truly scenic drive covering 48 miles between Estes Park on the east side and Grand Lake on the west. Eleven miles of this highway are above the tree line at an elevation near 11,500 feet. The higher we went, the colder it got.

We left our warm car to take photos and were so cold we could barely stand it even though we had on winter coats and hoods. We stopped at the visitors center, where the snow was higher than the roof. We watched men clearing snow with the largest snow-clearing machinery we have ever seen. It was hard to believe it was June. We drove back down to lower elevations for some hiking and continued on to Utah.

Utah has five national parks all relatively close to one another —Zion, Bryce, Arches, Canyonlands and Capitol Reef. We already had visited Arches and Canyonlands, so this time we headed to Capitol Reef National Park. The area was once known to Native Americans as the "land of the sleeping rainbow" because of its colorful striped cliffs and hills. The park was named for the immense rounded domes resembling the one on the nation's Capitol building.

We walked several trails along narrow wash bottoms with sheer canyon walls. I remember reading that thunderstorms can move in quickly, dropping large amounts of rain over a short period of time, causing flash floods, and that one should not enter wash bottoms if storms are threatening.

We stayed at the Rim Rock Motel in Torrey, which is a few miles from the entrance to Capitol Reef National Park.

Next stop was Bryce Canyon National Park. From the rim of the canyon, the ground falls away to reveal an incredible assortment of hoodoos, mazes and spires. Hoodoos formed over thousands of years by the same processes that formed the features of surrounding parks. Water, ice and gravity are the forces that formed Bryce Canyon. A Paiute legend says the rock pillars in the canyon are men who were turned to stone by an angry god who condemned them to stand forever in silence.

We hiked on the Queen's Garden Trail, a short trail. Although there is a climb, it is considered to be the least difficult trail leading below the rim. We started our descent below the canyon rim. As it was starting to grow dark, we reluctantly walked back to the top just as the moon became visible.

Our tour of Utah's national parks continued with our visit to Zion, Utah's first national park. Massive canyon walls ascend toward a brilliant blue sky. We took several hikes such as the Weeping Rock Trail, which ends at a rock alcove with hanging gardens, the Canyon Overlook Trail and the Riverside Walk.

Next stop was the Coral Pink Sand Dunes State Park, an expanse of coral-colored sand which has drifted into dunes. We had fun walking to the top of the large dunes and sliding back down.

Bridge View Drive leads to the overlooks and trailheads to the three bridges. One can either hike the canyons by trail to view the bridges from beneath or view them from overlooks.

The best part of the entire trip was at the end when Carolyn said she wanted to move back to St. Louis. Our prayers were answered.