Despite the rain, England vacation a dream come true
0 comments
Share this
{{featured_button_text}}
1 of 2 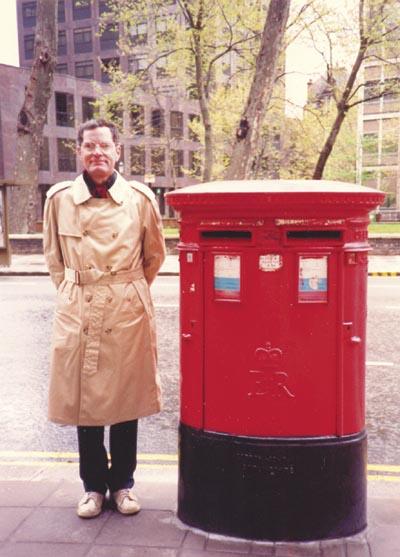 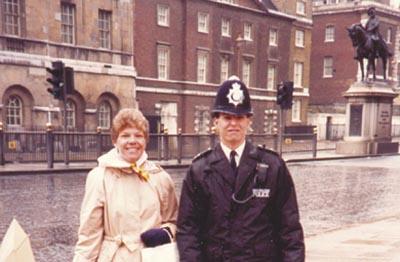 Since I was about 11 years old, I wanted to visit my pen pal, Mary Roberts, in London. I told my dad I wanted to fly to visit her, and very typically he replied, "Start saving your pennies."

Well, I did, and my dream came true; except I never met Mary.

I was able to join my husband in London during the second and third weeks of his business trip. We stayed at the Hotel Conrad in Chelsea Harbor on the River Thames. That afternoon, I tasted my first meal in an authentic pub. It consisted of bangers (sausages) and mash (potatoes) with beans, onion gravy, fish soup and ale. We enjoyed our walk through Chelsea and explored Harrods Department Store.

The next day we purchased a London visitor travel card and rode on a double-deck bus. Of course, being spring in London, it rained all afternoon. I remember a sign in our hotel saying one should never leave without taking an umbrella.

The rain did not stop us from taking our self-guided walking tour to Buckingham Palace, St. James Park, Trafalgar Square, Whitehall to see the Changing of the Guard, Parliament Houses, Big Ben, Westminster Abbey and #10 Downing Street. We rode the "tube" (subway) and walked to the Tower of London, Tower Bridge, Westminster Cathedral and Victoria Station.

We had a sunny day for our trip to the White Cliffs of Dover, where we explored Dover Castle. On a clear day from the battlements, one can see Calais, France, which is only 22 miles away. Dover Castle is one of Western Europe's most impressive medieval fortresses. We also toured "Hellfire Corner," a labyrinth of tunnels housing Admiral Ramsey's command post, operations room and anti-aircraft control center during World War II.

In Canterbury we visited Canterbury Cathedral, Mother Church of the Anglican Communion and seat of the Archbishop of Canterbury. It also is where Thomas a Becket was assassinated in 1170. Canterbury also is the home of the "Canterbury Tales" written by Geoffrey Chaucer in the 14th century about pilgrims on a pilgrimage from Southwark to Canterbury to visit the shrine of St. Thomas.

Next on our journey was Stonehenge and Bath. We drove through Salisbury, home of the tallest cathedral in England. I was surprised to see Stonehenge is right in the middle of a field. These monoliths were set in place about 5,000 years ago as a religious and cultural center for early herding clans.

We toured the Roman baths, which are remarkably complete in layout and are among the finest Roman remains in Britain. We went on a bus tour and viewed The Royal Crescent, a notable residential road of 30 houses, laid out in a crescent formation designed by John Wood the Younger and built between 1767 and 1774. It is among the greatest examples of Georgian architecture to be found in the United Kingdom.

Our next stay was at "The Mansion House at Grim's Dyke," former home of W.S. Gilbert of Gilbert and Sullivan fame. It is in a magnificent setting of 100 acres of woodland and overlooks London.

We toured Windsor Castle, where I could not believe I was standing in front of King Henry VIII's armor. He was short and wide. We lunched at a nearby tea shop where we dined on scones, strawberry preserves and clotted cream with our tea.

Don and I were invited by our host to an "Elizabethan Night" at the magnificent 15th-century Great Hall of the Old Palace of Hatfield House, once home to Queen Elizabeth I.

On our last day we drove to St. Alban, named after the first British martyr, where we visited the Cathedral of St. Alban. The town was built on the old site of Verulamium, the third city of Roman Britain, which flourished as an important provincial city for more than 400 years, from AD 49 until the fifth century. The remains of the Roman wall and theater still are visible.

Driving on the "wrong" side of the street was an adventure in itself. The attendant at the car rental agency said most of their traffic accidents occur during the summer, when the Americans visit. If you visit London remember, when crossing the streets, to follow the signs painted on the roads' crosswalks advising you to look right for oncoming traffic, or else you may look the wrong way and get hit by a car.

It was a trip of a lifetime and, Dad, it was worth every penny.