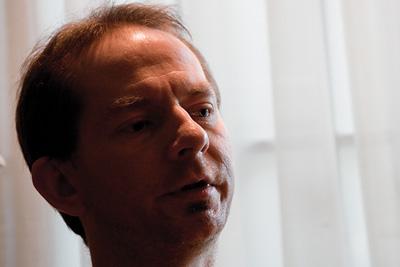 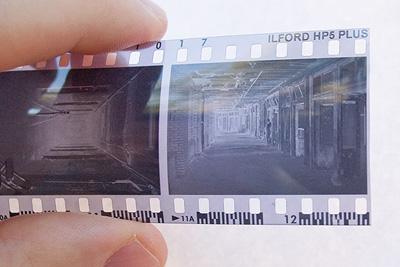 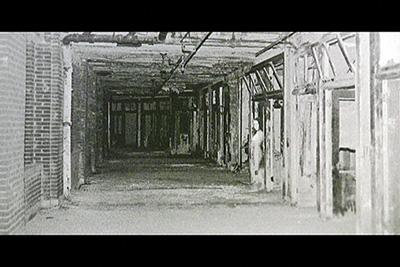 David Kennedy photo - The alleged image of a ghost is visible in this photo Tom Halstead took last year during an overnight investigation of a former sanatorium in Louisville, Ky. The facility reportedly was the site of more than 63,000 deaths at the height of the nation's tuberculosis outbreak in the early 1900s.
{{featured_button_text}}
By Buck Collier

For most of us, tonight is the time for seeing ghosts, goblins and things that go bump in the night - especially when we open our front doors.

But for Tom Halstead of St. Ann, any night can be a good night for observing paranormal activity - if the apparitions are willing to be seen, that is.

A member of Missouri Paranormal Research, Halstead is one of a growing number of people in the area interested in making contact with the spirit world and documenting what they find.

Halstead's interest in the paranormal stems from experiences in his family's house in the 3500 block of Westridge Lane in St. Ann. He glimpsed what he said was an apparition while doing a repair project at the house.

A short while later, while Halstead was outside, a stranger stopped by the house. He said he lived in the house in the 1950s. Halstead asked if he knew if anyone had died in the house. The man suddenly became less talkative, Halstead said, and quickly excused himself.

"He said he had to go somewhere and got in his car and left," Halstead said.

He never learned if anyone had died in the house or why he seemed to be the only family member to have seen the ghost.

The paranormal activity in the home has decreased during the years, Halstead said.

Oujia boards and seances - long held to be methods for contacting those on the other side - have been replaced by researchers using high-tech audio equipment, digital cameras and electronic devices that measure sudden fluctuations in ambient temperature.

But it was on black-and-white film that Halstead captured an image last year of what appears to be a young woman entering a hallway from a room in the long-abandoned Waverly Hills Sanatorium in Louisville, Ky.

Halstead was part of a team of investigators who spent a night in the former tuberculosis hospital that operated during the so-called "white plague" TB outbreak during the early 1900s. Considered one of the most haunted locations in the world, the hospital reportedly was the site of more than 63,000 deaths.

Halstead was on the fourth floor of the hospital about 6 a.m. when he said a presence was felt.

"We felt something was definitely there," he said.

Halstead picked up his camera, started panning around the area and began snapping shots.

"I don't remember seeing that woman there," he said. "It wasn't until I developed it later that I realized I caught something."

She appeared to be a young woman, perhaps not more than 17 or 18, with long, black hair and wearing what appears to be a nightgown.

That photo, taken in September 2006, won Halstead the "Best Ghost Evidence" award at the First Paranormal Awards Ceremony in July, part of the Ghost World Conference in Gettysburg, Penn.

Greg Myers of Arnold, director of Missouri Paranormal Research, said Halstead and others involved in these organizations - there are many such groups across the country - are serious investigators.

"A lot of people want to go out for the thrill-seeking aspect," he said. "Most of our people, we've been in paranormal situations. We're not out looking for that thrill. We're out to help people."

Myers said paranormal research is gaining wider legitimacy among the general public, even if it's still viewed with skepticism by other professional researchers.

"In the scientific community, we're still considered a para-science," he said. "The normal person is becoming more believing. Four or five out of 10 believe in the paranormal. That keeps going up every year."

However, according to Myers, there remains a corps of nonbelievers bent on discrediting the researchers and questioning their findings. They are called "trolls."

Halstead knows firsthand about the trolls, one of whom lives in the St. Louis area, he said, adding, "I know who it is, but I won't say."

Halstead said he has been a target since he took the picture at the old TB hospital, getting as many as five e-mails in one day from someone questioning the validity of his photo.

"It's been a year, and they continue to harass," he said.

The skepticism of some doesn't dampen Halstead's enthusiasm for research, nor does it discourage people who think they might be dealing with spirits and want to know for sure.

"We get contacted a lot," he said. "We've got investigations that are booked right now."

More information about Missouri Paranormal Research can be found at http://www.paranormaltaskforce.com/MPR.html.

North County has several areas purported to be haunted. Here are a few:

* John B. Myers House, 180 Dunn Road. Tom Halstead of St. Ann, a member of Missouri Paranormal Research, believes this site to be haunted. "I've been there," he said, referring to an investigation outing. "I got a weird shadow. I don't know what it was."

* Payne-Gentry House, 4211 Fee Fee Road. Although some claim as many as 23 ghosts haunt the house, Halstead doubts that it's inhabited by spirits. "I don't believe it's haunted. I've never seen anything."

* Thomas Jefferson Library, University of Missouri-St. Louis. Legend has it that the library is haunted by a mischievous poltergeist that enjoys riding up and down in the elevator at night.

* Want to see a live investigation of Waverly Hills Sanatorium, where Tom Halstead's picture was taken? Tune in to "Ghost Hunters," tonight at 8 on the SciFi Channel.

David Kennedy photo - The alleged image of a ghost is visible in this photo Tom Halstead took last year during an overnight investigation of a former sanatorium in Louisville, Ky. The facility reportedly was the site of more than 63,000 deaths at the height of the nation's tuberculosis outbreak in the early 1900s.
© Copyright 2022 St. Louis Post-Dispatch, 901 N. 10th St. St. Louis,MO | Terms of Use | Privacy Policy | Do Not Sell My Info | Cookie Preferences
Powered by BLOX Content Management System from TownNews.com.
You don't have any notifications.