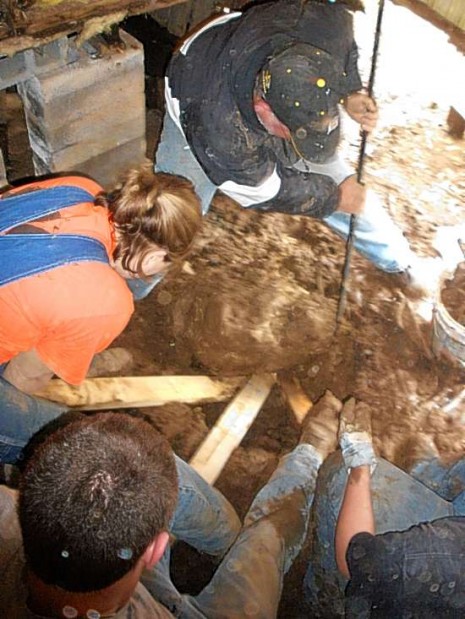 SUBMITTED PHOTO Working on a project in Appalachia are Jared Winters, the Rev. Tim Harrison, Courtney Motl and Eric Totten. The volunteers are from McKendree University in Lebanon. 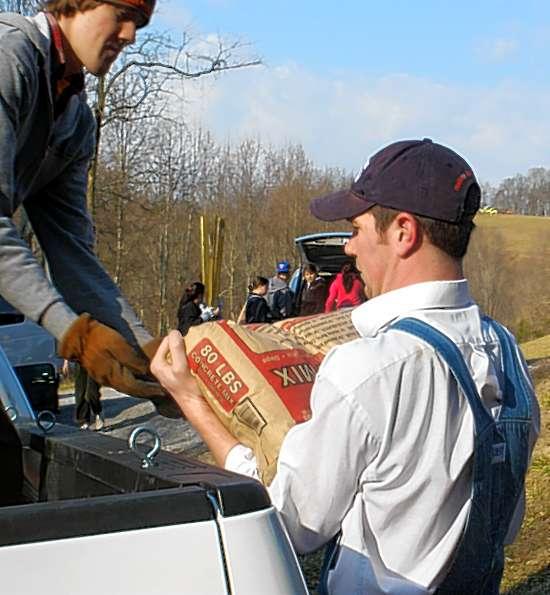 SUBMITTED PHOTO Because Jared Winters, of Chatham, a junior at McKendree University, had served on the Appalachia Service Project in 2009, he became the project leader for fellow students serving the area on their spring break. 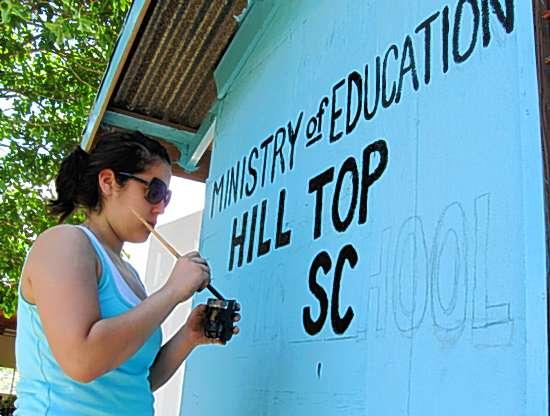 A spring break adventure in the mountains or tropics is not unusual. However, two groups of McKendree University students gained unique insight on trips last month.

Lyn Huxford, sociology professor and founding director of the school's Center for Public Service, has led an alternative spring trip to Jamaica since 1994. Linking community service with course work, she sees students commit more strongly than anticipated on the eight-day project and come home profoundly affected.

"Part of the purpose is to have a service experience, but there is also the cultural immersion," she said.

Students temporarily move out of busy lifestyles to share "island time." They worked on site and organize activities.

This year, the group raised about $4,000 for building a house, rebuilding a wall of the Hill Top Basic School for ages 2 to 6, and providing school supplies to four schools, two of which McKendree helped previously.

The simple, one-room, corrugated house without electricity or plumbing replaced one that burned. Its owner, Alfred Johnson, lived in a corrugated tin shack next to it.

Senior Kaitlyne Motl, of Glen Carbon, a community service scholar, went on the trip with 11 other students and three faculty members. She noted the universality of the older gentleman, "who could be your own grandfather."

"To demonstrate his gratitude, he would climb trees surrounding his house and throw down star apples, coconuts and other fruits. He would teach us about the fruits, how you eat them, local lore and legends," Motl said.

The group also bought a swing set with its remaining money.

Annie Bierman, of Mascoutah, a junior majoring in English literature, said her first two collegiate spring breaks were spent at home and on a shopping trip. She echoed students' amazement at the everyday Jamaican lifestyle, where minimum wage reaps $12 a week.

"People living that way would be considered devastated here," she said. "People write on walls instead of posting signs. Not many people have cars and walk everywhere. Yet, I did not meet a person who was not incredibly friendly."

Huxford, the professor, has not seen the widespread poverty change in her annual spring trips to the Caribbean island over the years.

"The need for housing is great," she said. "There are 2,000 foundations waiting for houses in that region and they are putting up, maybe, 100 a year.

The Rev. Tim Harrison, of McKendree University Campus Ministries, directed a mission trip closer to home. Twelve students and two adults joined the Appalachia Service Project to stabilize two homes. They added shingles to a roof and renovated a porch and deck. They also dug out a rotting floor and secured the foundation of a house for a family with a young child whose breathing problems were possibly heightened by the decay.

"It shows awareness that you don't have to go internationally to see the poverty," Harrison said. "The need for basic things like food and shelter exists not just in cities, but in the rural areas, too."

Tricia Straub, of Waterloo, a sophomore majoring occupational therapy, was on the roofing team of the house where two young children, two older teens and two adults lived.

"We were working on the trench of the roof, which they wanted done precisely, so it wouldn't leak," she said.

A veteran of a mission trip last year to New Orleans, she would like to go on another trip, preferably out of the U.S.

Students said helping out and forming relationships keeps them coming back.

"It's one thing to give a dollar and hope it goes to something good, but to be able to see the fruits of the fund-raising and see how much good it does in the community is another," she said."

A different kind of spring break

Volunteers from McKendree University spent spring break at projects on different sides of the earth. Here?s some of what they did:

&#8226 Planned activities for 40 kids in the open-air church

Glen Carbon resident and Edwardsville High School graduate Courtney Motl was so young when she first started volunteering, she could barely se…

SUBMITTED PHOTO Working on a project in Appalachia are Jared Winters, the Rev. Tim Harrison, Courtney Motl and Eric Totten. The volunteers are from McKendree University in Lebanon.

SUBMITTED PHOTO Because Jared Winters, of Chatham, a junior at McKendree University, had served on the Appalachia Service Project in 2009, he became the project leader for fellow students serving the area on their spring break.