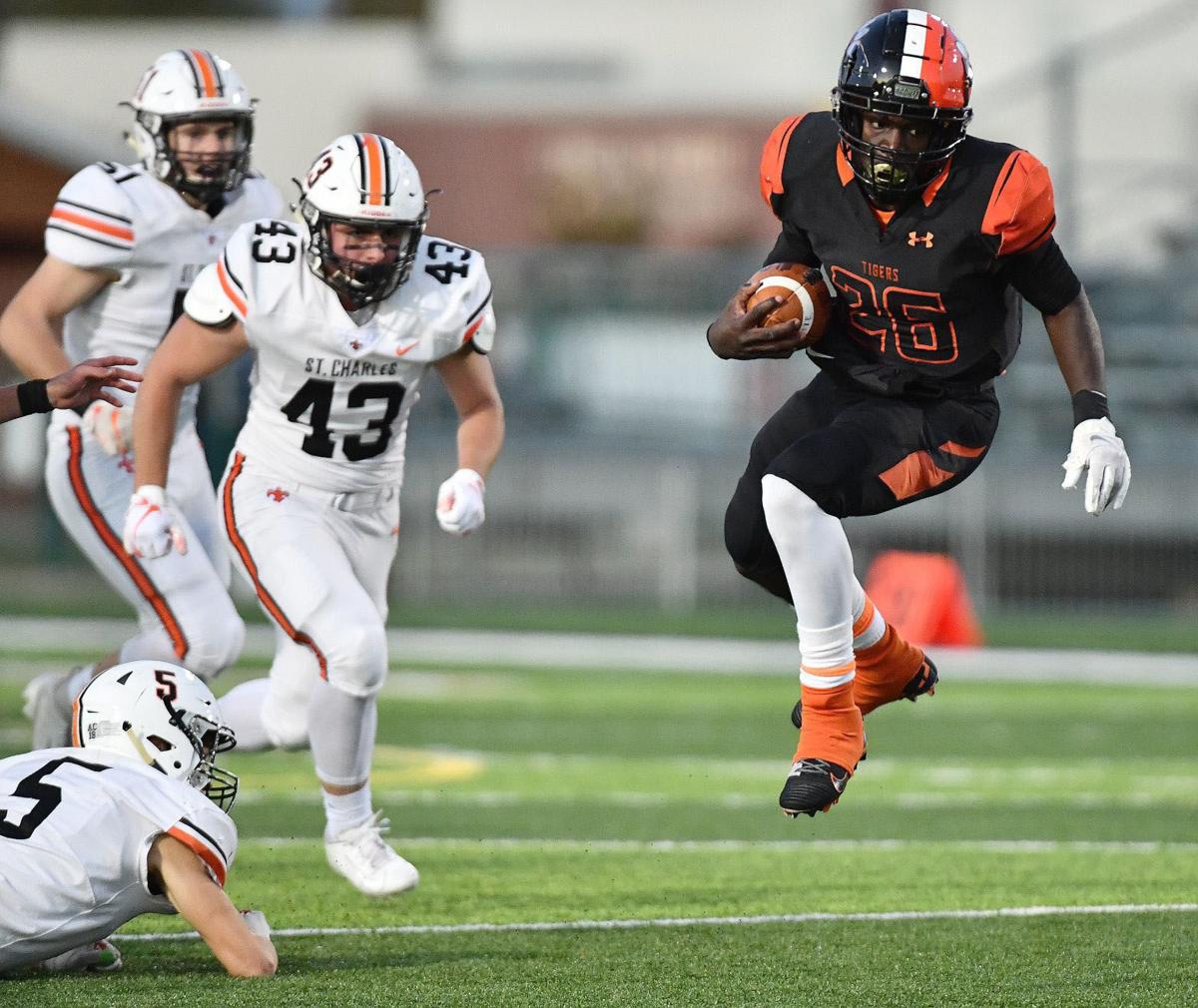 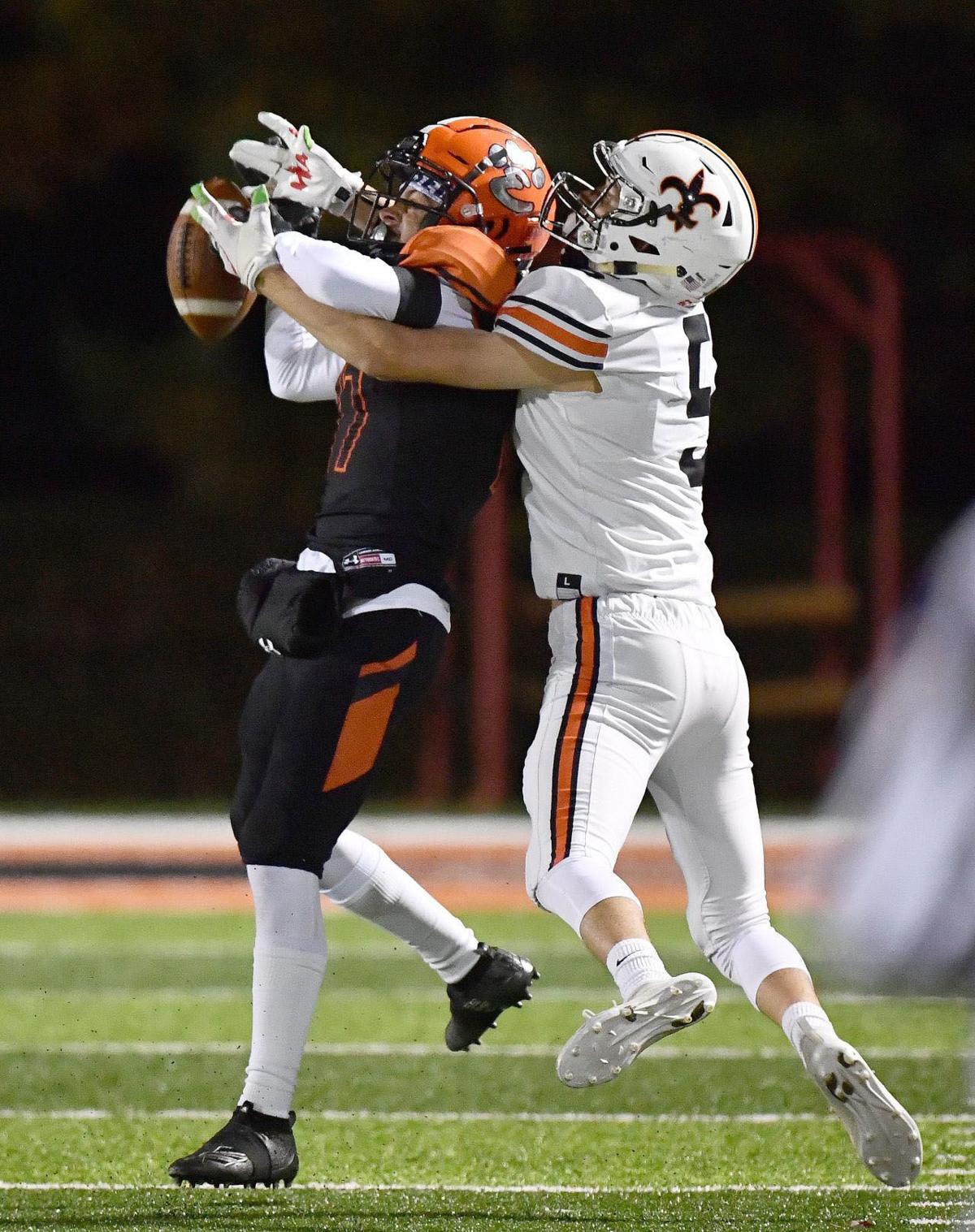 “I was ready, man,” he said. “I was in classes today just thinking about the game, thinking what I’m going to do tonight.”

What the Edwardsville junior running back did that night was rush for four touchdowns, including three in the first quarter, to lead the Tigers to a 44-17 win over St. Charles East in a Class 8A first-round playoff game at the District 7 Sports Complex.

“It was very exciting and very intense,” Johnson said. “We came out and punched them in the mouth and had to keep that intensity. We weren’t planning on ending the season tonight.”

Edwardsville (8-2), the No. 16 seed in Class 8A advanced to play at top seed Minooka (10-0) in a second-round game next week. Visit stlhighschoolsports.com for exact game time and location.

“I’m proud of them,” Tigers coach Matt Martin said. “I just told our kids that we beat a very good football team that is well-coached.”

St. Charles East (7-3) was making its fourth consecutive playoff appearance, but lost in the first round for the third successive season.

“We made too many mistakes overall to be able to hang with a team as good as Edwardsville,” Saints coach Bryce Farquhar said. “The big plays tonight really killed us. I thought their ability to create the big plays off their running game was huge. We just weren’t able to come up with the big plays when we needed them.”

With 51 total points scored, the first half resembled more of a track meet at times with both teams moving up and down the field almost at will.

The Tigers scored on five of their six first-half possessions, including the first three.

Edwardsville took the opening kick and marched 71 yards in five plays to take a 7-0 lead just 2 minutes, 20 seconds into the contest. Pierce Boyer had a big 39-yard catch on a third down play and Johnson took care of the rest, scoring on a 37-yard run that came on a direct snap.

After an interception by Nicholas Hylla, Johnson capped another five-play drive with a 1-yard dive over the pile to extend it to 13-0.

Johnson picked up a third TD before the first quarter was over when he scampered in from eight yards out on another direct snap as the Tigers built a 20-0 advantage.

“We ran a little bit of it earlier in the year before he got hurt,” Martin said of the Wildcat play. “He’s our best player. We felt like that could have helped us in some other games.”

St. Charles East finally dented the scoreboard when Cole Conn scored a rushing TD from one yard out to cut it 20-7 after one quarter.

Edwardsville quickly responded as Jacob Morrissey took the ensuing kickoff all the way to the Saints 8 and Ryan Hampton scored on a 1-yard quarterback keeper to give the Tigers a 20-point lead again.

The Saints rattled off 10 unanswered points by scoring on back-to-back possessions to start the second quarter. Nathan Hull hauled in a 47-yard bomb by QB Nathan Hayes just four minutes and then Ryan Gerkin booted a 37-yard field goal to trim the deficit to 27-17 with 1:30 left before halftime.

But Mason Ahlers took a pitch from Johnson and turned it into a 69-yard TD with 48.3 seconds left for a 34-17 advantage at intermission.

“That was huge. We wanted more cushion at halftime,” Martin said. “He (Ahlers) is one of our best players, too, and he’s just a junior. There’s some college coaches that need to look at him.”

The Saints pieced together a nice drive to open the second half, but Jackson Erminio’s 23-yard field goal attempt sailed wide right. Edwardsville’s Chase Parker would convert a field goal at the other end nearly four minutes later to make it 37-17.

Following a successful pooch kick, Johnson closed the scoring with his fourth TD of the night, a 32-yarder with 3:01 left in the third quarter, to give the Tigers at least one more week of practice.

“We’ve won a lot here and sometimes you take it for granted,” Martin said. “It doesn’t come easy. You have to beat good programs and we’ve been able to do that.”

Madison County news and events for the week of Jan. 15

Granite City news and events for the week of Jan. 15

Metro East news and events for the week of Jan. 15

Collinsville news and events for the week of Jan. 15