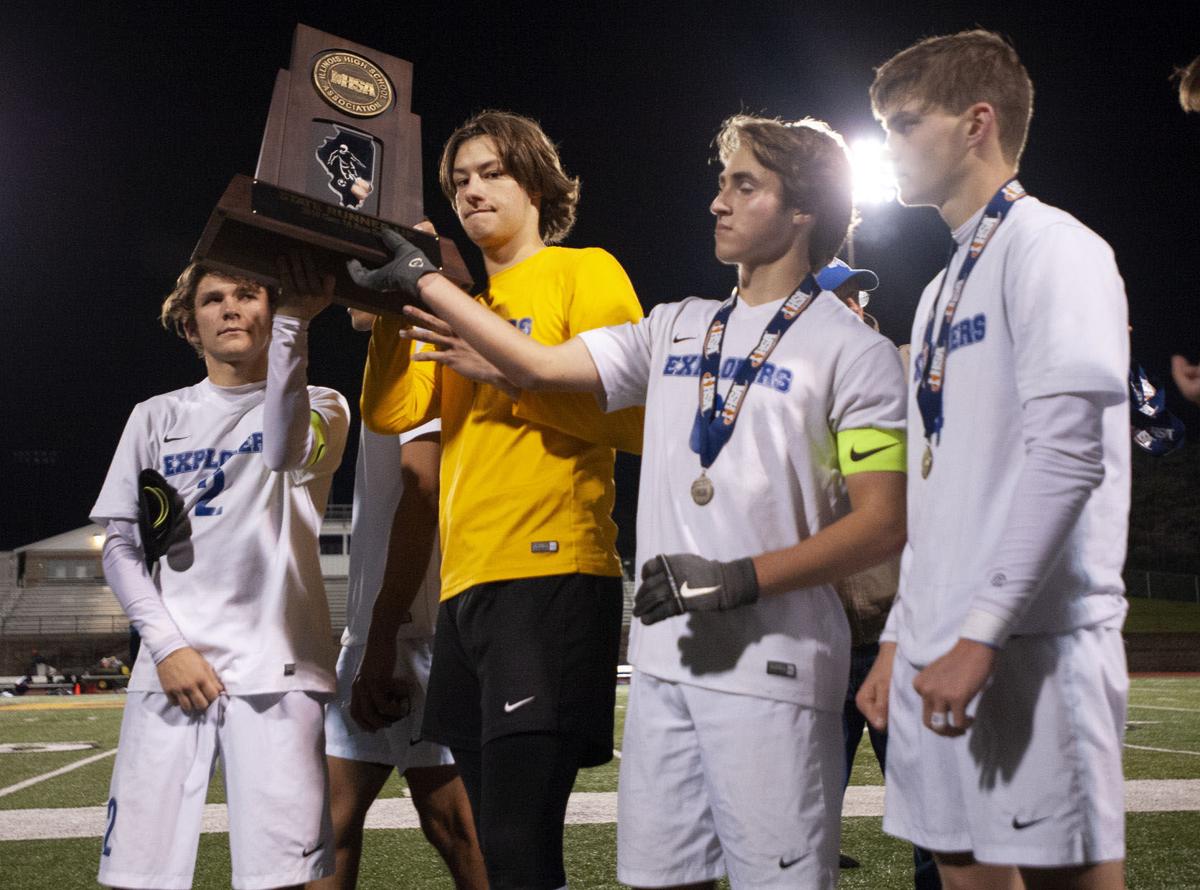 Members of the Marquette Catholic boys soccer team receive the second-place trophy after a 2-1 loss to University High in the Class 1A championship game last Saturday at EastSide Centre, in Peoria. 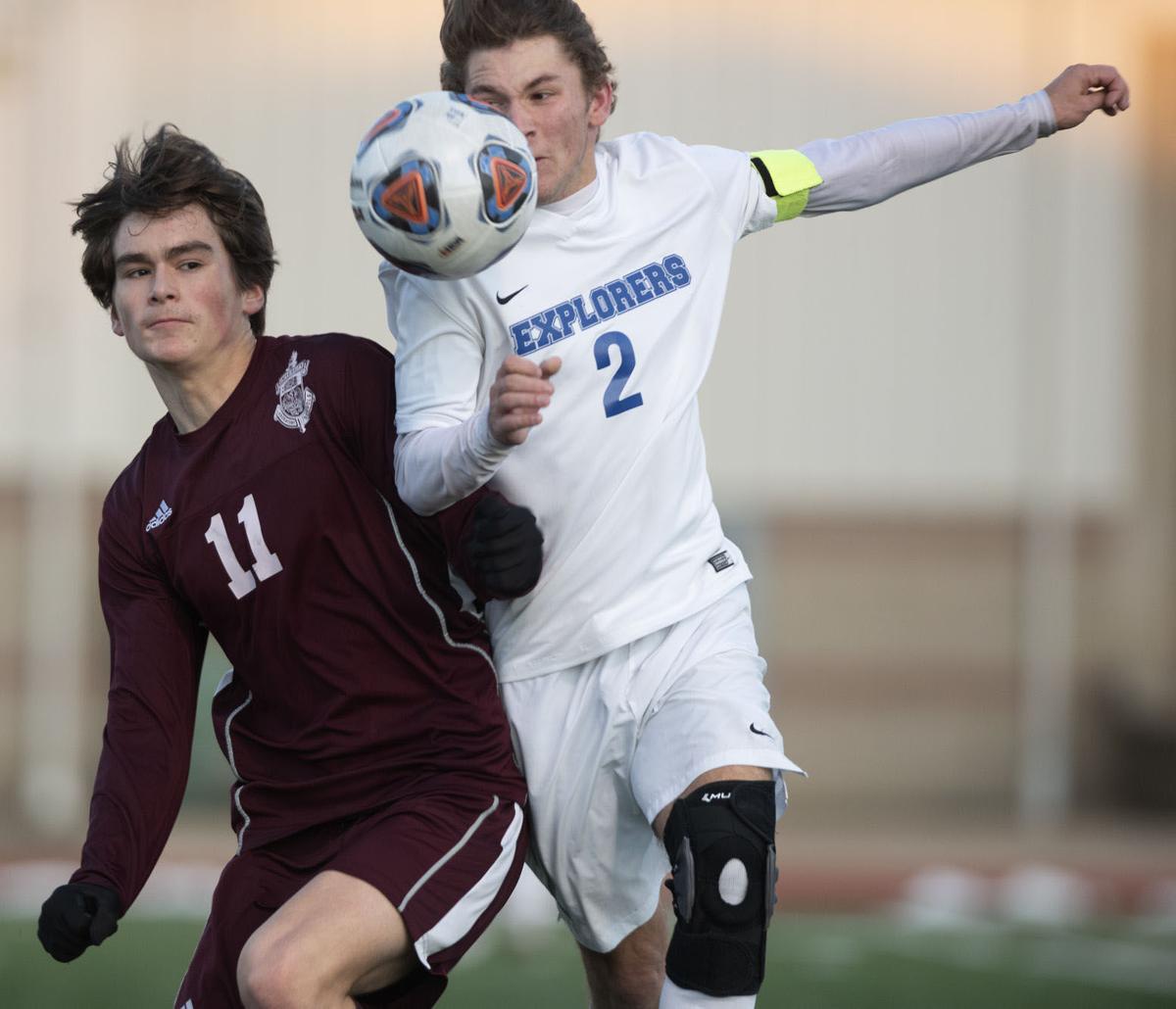 Marquette Catholic's Aaron Boulch (2) battles University High's Will Koenen (11) for the ball during the Explorers' 2-1 loss in the Class 1A boys soccer championship game last Saturday at EastSide Centre, in Peoria.

PEORIA — The Marquette Catholic soccer team prides itself on its high level of fitness.

But the Explorers ran out of steam last Saturday.

University High of Chicago scored twice in the final 18 minutes and 12 seconds to knock off Marquette 2-1 in the Class 1A state championship match at EastSide Centre.

Marquette (19-4-5) was searching for its second state championship in the last three years.

"I think they trusted me and I trusted them for how they would compete on the field," Explorers coach Tim Gould said. "We did that all season long. We pulled out a tie against Triad and that's when I knew that this team has a ton of fight. We've got a lot to go home and reflect upon as far as where we ended up and how we were successful this season — because we really were."

The Explorers battled injuries up and down the lineup. But Gould refused to use that as an excuse.

"It doesn't matter," Gould said. "We haven't been 100 percent and it's nothing new. These guys fight and do it all together, despite however they're feeling in the day."

That effort may have taken a toll on the Explorers.

University High (22-3-2) pounded away at the Marquette net and eventually broke through down the stretch.

"I think just the way they went at us, it limited the effectiveness of the guys who weren't 100 percent," Gould said. "It made us stretch and do some different things that maybe we weren't physically capable of doing tonight. But we tried. We kept battling all the way to the end."

Marquette attacked U-High early in the match and created chances from the opening whistle. Freshman forward Myles Paniagua took advantage of that early pressure with a goal midway through the first half.

"He works his tail off," Gould said. "He plays behind talented players, but he was on the varsity from Day 1 for a reason. I had in my mind that he was going to get a big one in the playoffs. I wish we would have made it stand up."

U-High seemed to pick up the pace after surrendering the first goal.

The Maroons kept Marquette senior Aaron Boulch in check most of the night.

"We talked this morning about how we're going to defend (him). Because clearly, from the film we watched, he's a great player," Potter said. "I have to give him credit and I hope he goes on to a school and plays well because he deserves it. We trusted our backs. We talked about his movement, but we didn't do anything different. We don't like to play differently."

With Marquette's leading goal scorer bottled up, the Maroons' offense kept knocking on the door until Stanley Shaprio scored to tie the contest.

Marquette had a chance to go back ahead when Dre Davis fired a shot from the 30-yard line the keeper managed to deflect out of bounds.

"Their goal was kind of a punch to the gut," Gould said. "Right before they scored in transition, Dre hit one from 30 yards out where their goalie got a hand on it. I think that would have given us a big-time lift, but then they scored 45 seconds later."

Alexandre Bal netted the game-winner with less than nine minutes remaining to give University High its first-ever boys soccer championship.

Edwardsville news and events for the week of Jan. 22

Metro East news and events for the week of Jan. 22

Collinsville news and events for the week of Jan. 22

Granite City news and events for the week of Jan. 22

Caseyville news and events for the week of Jan. 22

Glen Carbon news and events for the week of Jan. 22

Members of the Marquette Catholic boys soccer team receive the second-place trophy after a 2-1 loss to University High in the Class 1A championship game last Saturday at EastSide Centre, in Peoria.

Marquette Catholic's Aaron Boulch (2) battles University High's Will Koenen (11) for the ball during the Explorers' 2-1 loss in the Class 1A boys soccer championship game last Saturday at EastSide Centre, in Peoria.