JASON SIBERT / JOURNAL Visitors shop at the Mascoutah Farmer's Market on July 11. It runs through October. 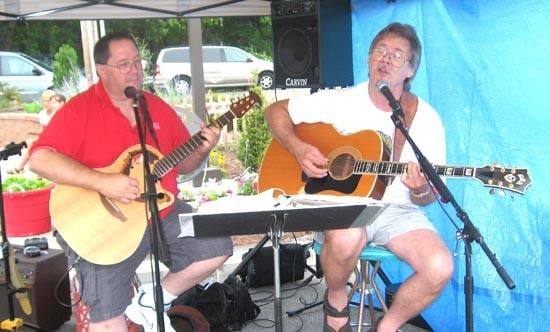 JASON SIBERT / JOURNAL Larry Darnell (left), of Dardenne Prairie, Mo., and Keith Domescik, of Belleville, perform at the Farmer's Market in Mascoutah on July 11. The farmer's market runs through October. 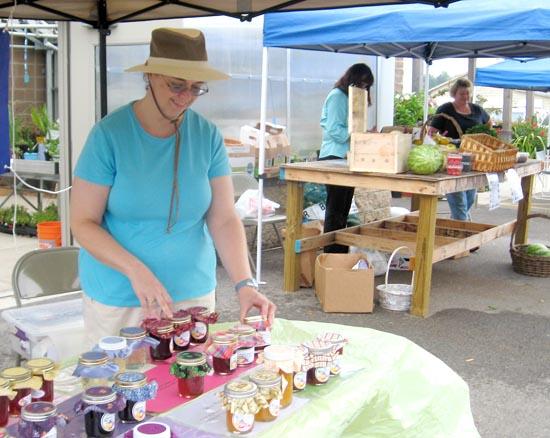 JASON SIBERT / JOURNAL Susan Tinge, of Lebanon, sells homemade jellies and jams at the Mascoutah Farmer's Market on July 11. It runs through October. 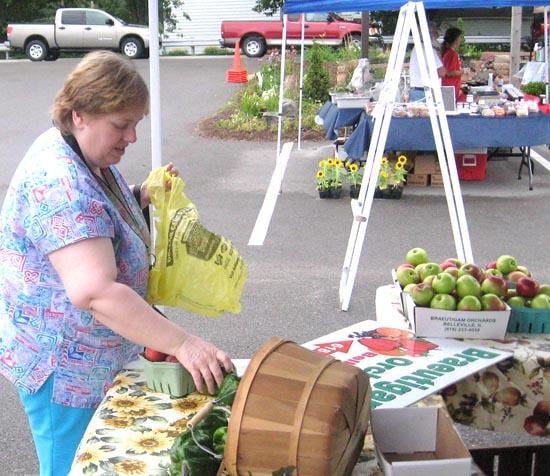 This summer's Farmer's Market in Mascoutah will give customers a chance to buy farm-fresh produce and support a nonprofit.

The event raises money for the nonprofit Trinity Services, which provides programs to developmentally disabled adults.

"It was such a success last year that we decided to expand it and grow it," said Trinity Services Administrative Assistant Georgia Hillyer. "We're a nonprofit and we can't spend a lot on advertising. The key to this is word of mouth, a good farmer's market is spread by word of mouth."

The market is attracting more vendors this year, and is raising about $200 per week for the Mascoutah agency, which "makes a huge difference for the program," Hillyer said.

The fundraiser is also important for Trinity due to recent cuts in social service funding by the state, Hillyer added.

"These people still need to be served, they don't go away if the state doesn't spend money," she said.

The Market started in May and runs through the first Saturday in October from 8 a.m.-noon.

"Our focus is local produce," Lowry said during a recent visit. "We focus on anything that can be grown in this area."

Sager said the Farmer's Market gave her family's business a chance to promote themselves to the public in a market dominated by chains.

"If people don't support the local market, pretty soon all there will be is Wal-Mart," Kayla Sager said. "A lot of locally based, small farmers will have to quit."

Sager also said customers often give her positive feedback on the larger size of peaches sold by her family's farm. She attributed the size to a later harvest, as store-bought peaches are produced by firms that harvest earlier in the season.

"People are very open-minded to organic foods, especially when you educate them," Gregory said.

Heritage Covered Gardens co-owner Rachael Mueth utilizes pesticide-free methods to grow produce. She worked in a booth with her mother, Mary Mueth, selling tomatoes, onions and garlic they grow on their one-acre garden in rural Mascoutah.

Mary Mueth, also a practicing nurse, said her occupation has increased her awareness of the food that people eat and how it impacts their bodies. She echoed Gregory's sentiments on the health benefits of naturally grown food.

Sue Tinge, of Lebanon, said making her jellies and jams in small quantities guarantees the quality of her fruit. Tingle and her husband, Steve Tingle, grow their own fruit in a one-acre backyard garden.

Diane Sadler, of Mascoutah, purchased peaches and green peppers from one of the stands. She said she had never visited the market before but was "determined to come."

The Alpa Foundation, another nonprofit that raises money for Trinity Services, sold premium coffee and produce at opposite sides of the market.

Karen Popwell, of Belleville, worked at the booth offering produce - including watermelons, tomatoes and blueberries. In addition, the booth sold pies made by Mascoutah resident Alana Whieldon She said the market represented "a marvelous opportunity" for Alpa to raise money.

Mary Ann Schlesinger, of Fayetteville, said she came to the market because her son-in-law Larry Darnell, of Dardenne Prairie, Mo, was playing music with Keith Domescik, of Belleville. She also said she was impressed by the quality of vendors.

Acoustic guitarists Domescik and Darnell entertained attendees with a combination of folk, country and western, and oldies rock. The two have been playing the farmer's market for a month. Domescik said the market provided a "family oriented atmosphere" for their music.

JASON SIBERT / JOURNAL Visitors shop at the Mascoutah Farmer's Market on July 11. It runs through October.

JASON SIBERT / JOURNAL Larry Darnell (left), of Dardenne Prairie, Mo., and Keith Domescik, of Belleville, perform at the Farmer's Market in Mascoutah on July 11. The farmer's market runs through October.

JASON SIBERT / JOURNAL Susan Tinge, of Lebanon, sells homemade jellies and jams at the Mascoutah Farmer's Market on July 11. It runs through October.