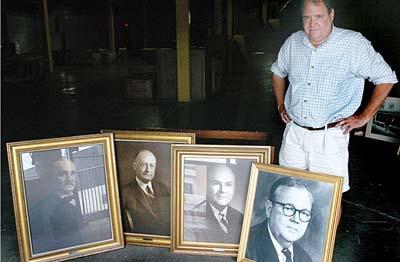 Rick Graefe photo/ Since its inception in 1861, five generations of Lammerts have operated Lammert's Furniture and Gift Co. in the St. Louis area. Martin Lammert V of Ladue is closing the business this year after receiving an offer for the store's property in Frontenac. 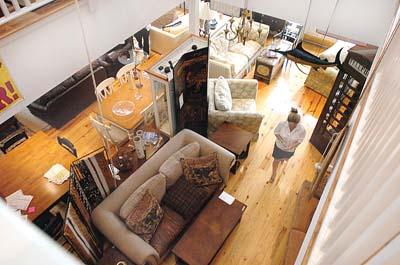 Rick Graefe photo/ Lammert's three-story showroom at 501 S. Lindbergh Blvd. was sold Sept. 22 to Bob Johnston. In order to liquidate its inventory, Lammert's is leasing the space for 60 days with an option to extend the lease. 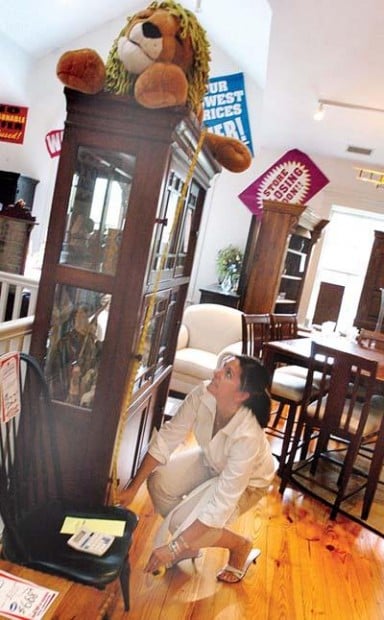 Rick Graefe photo/ Hope Goffstein, an employee at Lammert's Furniture and Gift Co. for the last eight years, takes measurements of a piece of furniture. 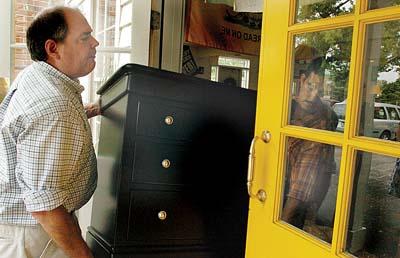 Rick Graefe photo/ Martin Lammert V, left, gets assistance from Enrique Aguilar in moving a piece of furniture at Lammert's Furniture and Gift Co. The business is closing after nearly 150 years.
By Kelly McCann

When Martin Lammert Sr. founded his furniture store in St. Louis in 1861, he paved the way for a multimillion-dollar, retail-furniture company.

After nearly 150 years and five generations, Lammert's Furniture and Gift Co. is closing its doors and saying farewell to its customers.

"I would not be surprised if most homes in the St. Louis area have a special item purchased from Lammert's," said Martin Lammert V, president of the business.

Lammert sold the store's property at 501 S. Lindbergh Blvd last week to Bob Johnston. Lammert's is leasing the multilevel showroom in Frontenace in order to liquidate its inventory.

For many St. Louisians like Marilyn Pryor, Lammert's is a household name that brings to mind good-quality furniture. Pryor's family has been purchasing furniture from the company for four generations.

"It's a St. Louis tradition, and a lot of people in the state will be very disappointed when they find out that they can no longer come to Lammert's," Pryor said.

Pryor, 85, recalls siting in an oversized chair as a child outside the Lammert's Furniture and Gift Co. store on Washington Avenue. Today, the Olivette resident relaxes in a Lammert's brown-leather loveseat in the comfort of her home.

"Everybody who ever bought a piece of fine furniture from Lammert's is proud of it," she said. "People do pass it down from generation to generation, and I don't think any other store in St. Louis can say that."

Before his days of furniture and customers, Lammert Sr. was a German immigrant who came to the United States with his parents and settled in Washington, Mo. At the age of 16, he was orphaned and traveled down the Missouri River to settle in St. Louis.

"He was a good merchant, he knew how to buy and trade furniture and he was fair," said Lammert V, in regard to his great-great-grandfather's business tactics.

When Lammert Sr. returned to St. Louis after fighting with the Union in the Civil War, the city was booming with growth. The business expanded so rapidly, it outgrew its showroom on Franklin Avenue and bounced around eight times downtown, to a larger location each time.

Lammert Jr. went on to run the company and was elected All-American Merchant in 1922. At the helm of his term as company president, Lammert's merchandise was used to furnish the Presidential Palace in Mexico City. Furniture from Lammert's went on to grace Anheuser-Busch Cos., Culver Military Academy and even the owner's suite at the Trans World Dome.

By 1960, under the leadership of Lammert III, Lammert's boasted five stores in the St. Louis area, including its flagship store on Washington Avenue. In addition, the company stored much of its merchandise at a 400,000-square-feet warehouse, employed 500 people and recorded sales of about $10 million.

"He was important for the business, because it came to a zenith under him," Lammert V said of his grandfather. "It became well known in the industry and around the country."

Lammert IV took over in 1970 at a time when the downtown retail industry was struggling to survive as people traveled to the suburbs to shop. He made the decision to close the downtown location and shifted the focus of the business to fine furniture.

"We went from everybody's store to high-end merchandise," Lammert V said. "We retreated to high-end, because when the wholesale stores opened, it became hard to compete against them."

In the 1990s, the company downsized to one location in Clayton, but later moved due to high property taxes. In 1997, two years into his tenure as president, Lammert V oversaw the construction of the current 10,000-square-feet location at 501 S. Lindbergh Blvd. in Frontenac.

Today, as the store prepares to close its doors, seven employees ponder what the future holds. For the past eight years, Hope Goffstein has worked in sales at Lammert's, listening to story after story about special pieces being handed down from generation to generation. Goffstein, too, has a story about a piece of Lammert's furniture. She inherited an entrance hall piece from her grandmother who passed away 16 years ago.

"If you are a St. Louis person, everyone pretty much knows Lammert's," Goffstein said.

Patti and Larry Shine of Chesterfield bought their first pieces from Lammert's about 15 years ago and plan to pass them down to their children. Patti said she frequented Lammert's over the years because of the quality of the furniture and to find unusual pieces. Last week, Patti took her son to the store's liquidating sale to purchase a table and chairs and some unique items she said you won't see anywhere else.

"I am sad because I have seen so many furniture stores close during my years in St. Louis," Patti said. "We have enjoyed their store, and it's been a lot of fun."

Lammert V said he is assessing other opportunities in the home-furnishings business, but he is not quite sure what is next for him. Although the store is closing, the memory of Martin Lammert Sr.'s legacy will live on in the Lammert's furniture that beautifies homes throughout St. Louis and surrounding communities.

Rick Graefe photo/ Since its inception in 1861, five generations of Lammerts have operated Lammert's Furniture and Gift Co. in the St. Louis area. Martin Lammert V of Ladue is closing the business this year after receiving an offer for the store's property in Frontenac.

Rick Graefe photo/ Lammert's three-story showroom at 501 S. Lindbergh Blvd. was sold Sept. 22 to Bob Johnston. In order to liquidate its inventory, Lammert's is leasing the space for 60 days with an option to extend the lease.

Rick Graefe photo/ Hope Goffstein, an employee at Lammert's Furniture and Gift Co. for the last eight years, takes measurements of a piece of furniture.