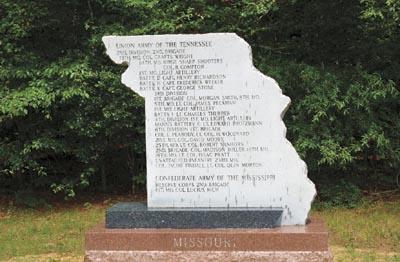 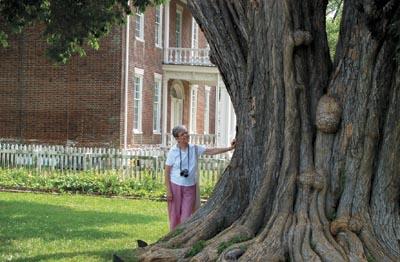 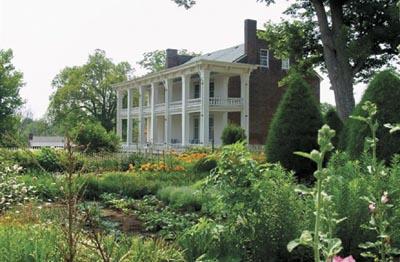 After reading "The Widow of the South" (based on true events) by Robert Hicks, I was inspired to visit the town of Franklin, Tenn., to see for myself the Carnton Plantation, where this story took place.

Franklin is an easy drive, about 350 miles from St. Louis. Located a short distance south of Nashville off Interstate 65, the town was founded in 1799. Upon our arrival, we stopped at the visitors center at 209 E. Main St. to start a self-guided walking tour of the Downtown Historic District.

We thoroughly enjoyed our walk and photographed some of the beautifully restored antebellum homes. Downtown Franklin has been designated a National Register Historic District, with more than 70 unique shops and restaurants. A statue of a Confederate soldier and four cannon stand in the center of the town square.

The main reason for this trip was to visit Carnton Plantation and the McGavock Confederate Cemetery. Hundreds of wounded and dying soldiers were brought to this plantation home, which served as a field hospital after the Civil War Battle of Franklin, which was fought Nov. 30, 1864.

Our guide explained that in order to qualify property as a plantation, the owner must have owned 20 or more slaves. We usually think of cotton or tobacco being raised on a plantation, but the owners of Carnton raised pigs. Our guide pointed out various blood stains throughout the house as surgery and amputations were performed here after the battle. The 1847 vegetable and ornamental garden has been restored, as well as several of the original slave quarters, springhouse and smokehouse.

In 1866, John and Carrie McGavock donated two acres at Carnton for the reinterment of the Confederate dead killed in Franklin. The graves of the soldiers extend out from the family cemetery where the McGavocks' own children were buried. Carrie kept records of all the soldiers buried here and helped many families locate the graves of their loved ones.

The graves are arranged in order by state, including 130 soldiers from Missouri. This is the largest private Confederate cemetery in the country, and the 1,481 graves are maintained by the United Daughters of the Confederacy.

The next stop on our Civil War journey was the Carter House, built in 1830, which was caught in the very center of the Battle of Franklin. We viewed a video, browsed the military museum and went on a guided tour of the home and grounds.

Our guide did not sugar-coat the story of the battle, describing some of the horrible sights and sounds that one would have experienced while the battle was raging. The Carter family and some neighbors were huddled in the basement while all of their buildings sustained many bullet holes still visible today. Heavy casualties totaled 2,368 Union troops and 6,252 Confederates, including 15 Confederate generals and Capt. Tod Carter, youngest son of the Carter family. How ironic it was that he died in the very home in which he was born.

We decided to drive south to Shiloh National Military Park. We obtained a brochure and a map at the visitors center, where exhibits and a 25-minute film introduced the battle. The self-guided auto tour outlines 14 tour stops and highlights troop movements of the armies during the two-day battle, which took place April 6 and 7, 1862. Many of the park's 156 commemorative monuments, 600 troop position markers and 200 cannon can be seen from the park roads.

At dawn April 7, Union Gen. Ulysses S. Grant attacked the Confederates and forced them back to Shiloh Church. Confederate Gen. P.G.T. Beauregard withdrew his outnumbered command and returned to Corinth, Miss. When the battle was over, a total of 23,746 men were killed, wounded or missing.

The Shiloh National Cemetery is situated on the high river bluff above Pittsburg Landing. Established in 1866, it is the final resting place for more than 3,500 Union soldiers, a Revolutionary War soldier and hundreds who served in World Wars I and II, Korea and Vietnam. We were impressed at the natural beauty and tranquility of the park and cemetery and the lack of commercialism.

We returned home with a deeper awareness of the sufferings and privation endured on both sides of the Civil War.