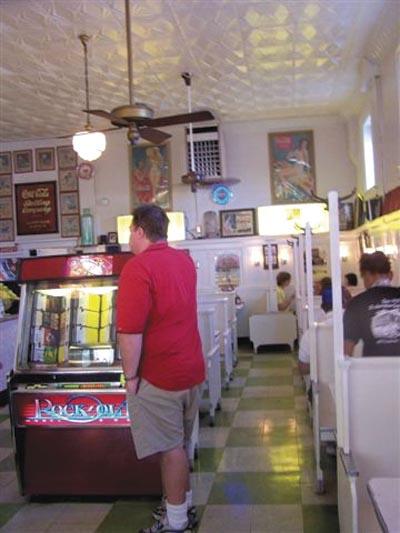 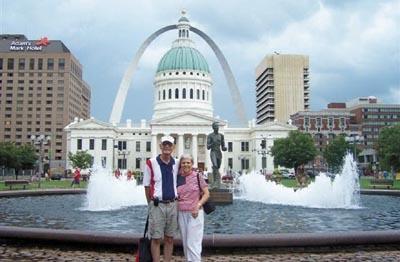 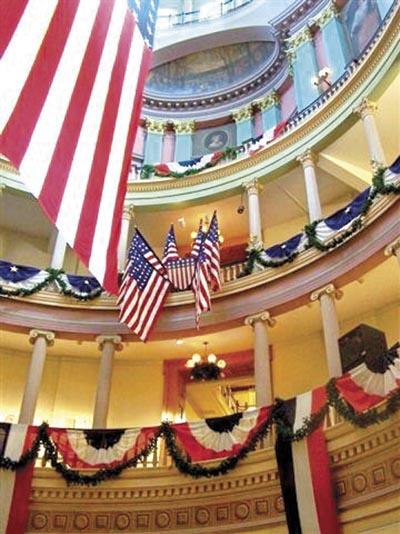 The dome of the Old Courthouse is decorated with American flags.
By Lois Hasenfratz

As an aficionado of all things related to the Civil War, I wanted to see the exhibit at the Old Courthouse marking the 150th anniversary of the U.S. Supreme Court decision in the Dred Scott case.

The Dred Scott decision of 1857 is being commemorated with a year-long series of activities and exhibits. When we visited the building in June, my eyes were drawn upward and I marveled at the beauty of the dome. Artists were commissioned to paint and decorate the upper levels of the interior dome with a series of frescoes and vignette murals. On the day of our visit, the rotunda was festooned in red, white and blue in preparation for the 1857 Independence Day Celebration on July 4.

We enjoyed a guided tour of the building, viewed a film on the Dred Scott decision and the exhibit on slavery. Scott was one of more than 200 slaves who sued their owners for freedom at this courthouse, and there were several trials involving Scott. One was conducted in 1847, another in 1850. Scott lost the first trial, but in 1850 a court decided the Scott family should be free.

In 1852 the Missouri Supreme Court reversed the lower court's decision. In 1854 Scott sued again, and the suit was heard in federal court, where Scott lost again. The case was then appealed to the U.S. Supreme Court, which also ruled against him. This decision helped push the nation into the bloody Civil War.

In 1857 Scott and his family were freed by Taylor Blow. I left with a renewed sense of the historical significance of the courthouse and of the horrors of slavery.

We walked several blocks from the courthouse to the Eugene Field House and St. Louis Toy Museum at 634 S. Broadway. The home is the only survivor of the 1845 block of 12 row houses and was the home of Roswell Field, the lawyer for Dred Scott. It also was the childhood home of Eugene Field, the "Children's Poet" best known for "Little Boy Blue" and the "Dutch Lullaby" (Wynken, Blynken and Nod).

We toured the home and viewed "Narratives Voices: The Dred and Roswell Story" narrated by Scott's great-great-granddaughter. I especially liked the poignant exhibit "Passport to the Past," which compared and contrasted the lives of free and slave children prior to the Civil War. The room was divided into two areas: one depicting the stark life of a slave child versus the more prosperous life of a white child on the other side. Each area contained samples of clothing, bedding, toys and food typical of the period.

When lunchtime approached, we drove to Cafe'de Menil at 3552 DeMenil Place. The cafe is located in the original carriage house of the Chatillon-DeMenil Mansion, built in 1875.

We opted to sit outside on the terrace and enjoyed our lunches.

Next on our tour was the world headquarters of the Anheuser-Busch brewery. The free guided tour took us to visit the historic stables, home of Clydesdale eight-horse hitch, the brew house and the beachwood aging cellars. We learned all about the brewing of Budweiser from all-natural ingredients of barley, malt, hops, yeast and water. At the end of the walking tour we boarded a trolley, which transported us to the hospitality room.

Because we chose not to have dessert at the cafe, I suggested we visit the Crown Candy Kitchen for ice cream. It is located on the North Side at 1401 St. Louis Ave. and was founded in 1913. Inside we found white booths, Coca-Cola memorabilia, a candy counter, a vintage "Rockola" juke box and an old-fashioned soda fountain. We ordered thick chocolate marshmallow malts served up in a tin cup as in days of old. The restaurant also serves lunch and dinner and makes all of their own delicious chocolate candy and ice cream toppings. We really enjoyed our blast from the past.

While in the neighborhood, we visited Mount Grace Chapel where, since 1928, there always has been one or two Holy Spirit Adoration Sisters (known as Pink Sisters from the rose color of their habits) kneeling in adoration before the exposed Blessed Sacrament. The chapel, 1438 E. Warne Ave., is open daily to the public from 5:30 a.m. to 6:25 p.m.

At day's end I felt as if I had truly been on vacation and commented to my family that "St. Louis is a pretty nice tourist town."

The Shawnee National Forest, which owns the Trigg Lookout Tower, temporarily closed it on Thursday after The Southern inquired about whether it planned to repair a large gaping hole in the fencing around the top platform.

The Wentzville School District has announced that it will provide free meals for all students in the District beginning October 1, through Dec…

The dome of the Old Courthouse is decorated with American flags.
© Copyright 2020 STLtoday.com, 901 N. 10th St. St. Louis, MO | Terms of Use | Privacy Policy
Powered by BLOX Content Management System from TownNews.com.
You don't have any notifications.