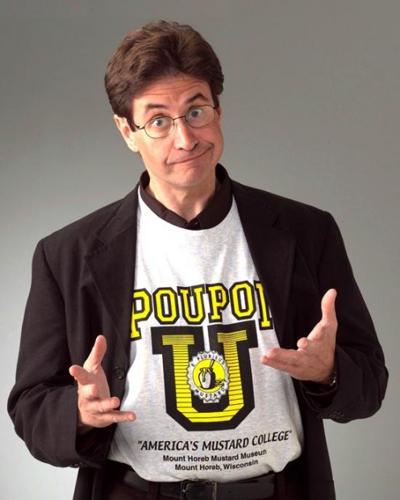 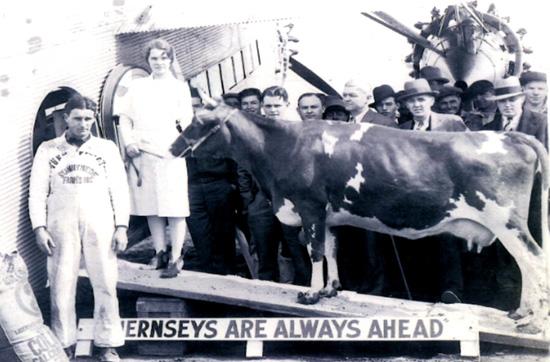 Courtesy Mount Horeb Mustard Museum Elm Farm Ollie stands outside the plane that carried him to St. Louis on Feb. 18, 1930.
By Jim Merkel

Frankly, the fantastic flight of Elm Farm Ollie was an aeronautical feat far from Charles Lindbergh’s first flight from New York to France.

Nonetheless, Ollie’s feat may have widened the knowledge of science. It certainly made him the subject of countless websites, an alleged ballad and the namesake for a yearly festival in Wisconsin.

To hear part of the ballad of Elm Farm Ollie click here.

On Feb. 18, 1930, Ollie purportedly became the first airborne cow, when she flew 72 miles on a plane from Bismarck, Mo., to the International Aircraft Exposition in St. Louis.

The St. Louis Globe-Democrat reported the next day that the half-ton cow was milked in flight and the product was put into paper containers and parachuted to the Arena, where the latest airplanes were on display.

According to some, the experiment was done so scientists could observe midair effects on animals, among other things.

There was more to the exposition than a cow in a tri-motor airplane, though. Ten thousand people watched as Barney Zimmerly set a world altitude record of 27,250 feet on a flight from Forest Park Field. And a plane flew from Little Rock, Ark., to St. Louis in the unheard-of time of three hours.

But none of those accomplishments have earned the adulation that Barry Levenson gave it when he wrote “The Bovine Cantata in B flat Major” (from “Madame Butterfat,” by Giacomo Moocini).

Levenson is the curator and CMO (chief mustard officer), of the Mount Horeb (Wisc.) Mustard Museum.

So why is a museum that shows off more than 4,600 kinds of mustards interested in a cow?

“There’s a phrase we use here in Wisconsin,” Levenson said. “‘A cow who cuts the mustard is a cow who can be trusted.’”

Levenson’s museum holds “Elm Farm Ollie Day” either on Feb. 18 or the previous weekend. This year, it was held on Feb. 15.

“We will be celebrating it here at the Mustard Museum this Sunday, but we expect that people around the world will be taking note of Miss Ollie’s great achievement on the actual day, Feb. 18,” Levenson said last week.

He found out about Elm Farm Ollie in 1981 and immediately started doing research.

In the 1930s, airplanes were in their heyday, Levenson said. It was so early that anything somebody did would be a record.

“Someone got the idea, ‘Let’s put a cow in an airplane,” Levenson said. And so a cow was located and flown in a Ford Tri-Motor plane.

“I just thought, ‘What a great story,” Levenson said. “I thought the story was incomplete. So in the fine traditions of American journalism, I made up the rest.”

They want to sell Ollie’s Skymilk for 10 times its worth. But Ollie tells them to drop the milk to needy children below, or he’ll drop a huge cowpie in the middle of the plane.

The song stops briefly, and a voice says, “Be very careful when someone promises you pie in the sky.”

The Complete Bovine Cantata in B Flat Major

(from Madame Butterfat, by Giacomo Moocini)

Elm Farm Ollie was munching on her hay.

The skies above St. Louis were cloudless and deep blue-ie;

Though Ollie was a trooper, the hens just would not lay.

His debits were increasing and his profits were way down.

If only friend you knew how he loved that little moo cow,

Near St. Louis City, where calves are so pretty,

'Twas there I first met my sweet Ollie the cow.

Through streets old and cobbled,

With her dainty hooves she hobbled,

Two sharp and shifty salesmen pounded on the door.

They made a startling offer that Brown could not ignore:

"You'll soon be thick in clover. Why don't you think it over?

Just let us take your milk cow and your riches we'll restore."

They had a novel gimmick, even you would not deny,

To take a simple moo cow and to fly her through the sky.

"Her milk we do desire! Above the clouds we'll fly her.

We'll pay you well for what we sell -

"All we want is Elm Farm Ollie!

Farmer Brown was trembling; he knew he had to choose:

Without this needed money he knew Elm Farm he would lose.

But he loved that little bovine with her big brown eyes so divine.

He hated to part with the light of his heart

But he just could not refuse (he could NOT refuse).

They took her to the airfield; she did not understand

These wicked city dealers and the scheme that they had planned:

A sinful exploitation (with gold their expectation).

As she came aboard the engines ROARED; she was soon high over land.

My Ollie flies over St. Louis.

My Ollie flies over Racine.

My Ollie flies over Milwaukee.

O bring back my moo cow to me!

These shady urban merchants thought they had it made.

They dreamed of selling "Skymilk" for ten times what they'd paid.

But when they squeezed her udder, Miss Ollie gave a shudder!

She'd put up a fight in midair flight - SHE WAS NOT AFRAID!

Ollie gave a warning in a voice so bold and stern:

"You'd better reconsider or a lesson you will learn.

My milk is for the needy (the truly needy), I'll not oblige the greedy."

And I would bet when they heard her threat their stomachs surely turned.

"I'll make the biggest cowpie that you have ever seen.

So follow well my orders or I will be obscene.

The dire consequences, an assault upon your senses.

Your claim to fame will be a song of shame:

Those malevolent men in their flying latrine . . .

"I will let you milk me but here's what must be done:

Put it into cartons as we fly up to the sun.

To parachutes connect them, o'er the city we'll eject them,

For the children below who need it to grow, now isn't that more fun?"

Our avaricious villains knew that they must pay,

And a gentle little moo cow was a heroine, they say.

All hungry tots and weak ones, underprivileged kids and meek ones

She flies through the air with the greatest of ease

Dropping her ice cream, her yoghurt and cheese.

[Spoken: There's a moral to this story. It could be a promise or it could be a

threat. So be very careful when someone promises you pie in the sky.]

Give my regards to Elm Farm, remember me to Farmer Brown.

Tell all the gang behind the chicken coop that Ollie's back in town!

Whisper of how that guernsey would truth and justice never betray.

Give my regards to all the animals on Elm Farm Ollie Day!

It's so nice to have you back here on the farm.

We hear the rooster crowin'; Farmer Brown's a glowin';

So Ollie won't have to go away [3 times] again!

Sing we praises of that moo cow

Airborne once and ever more

These fine things we can’t ignore.

As we recall her bold retort:

When that good guernsey had her way

Dairy products, we consume them

On this Elm Farm Ollie Day