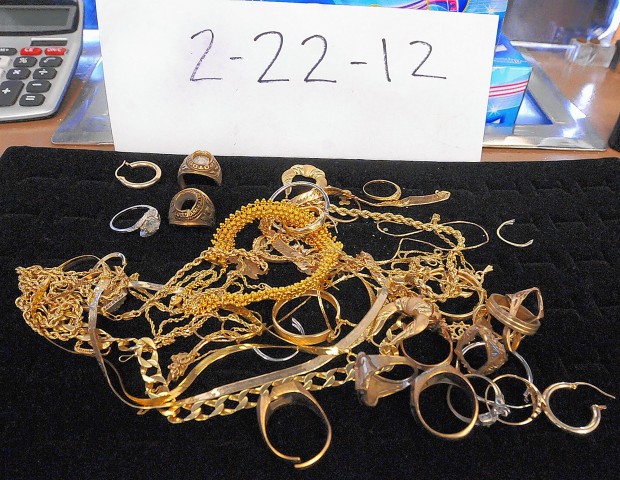 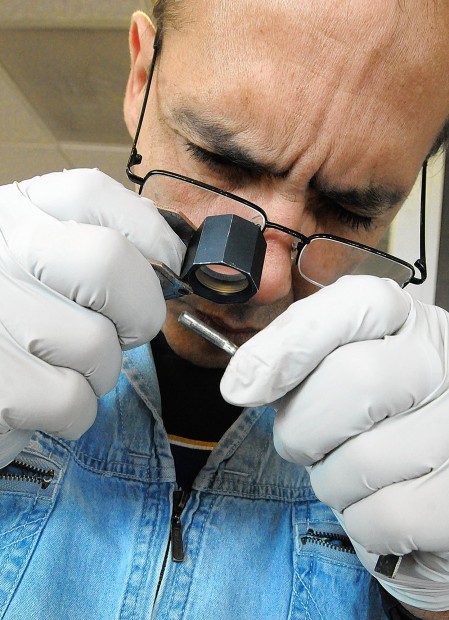 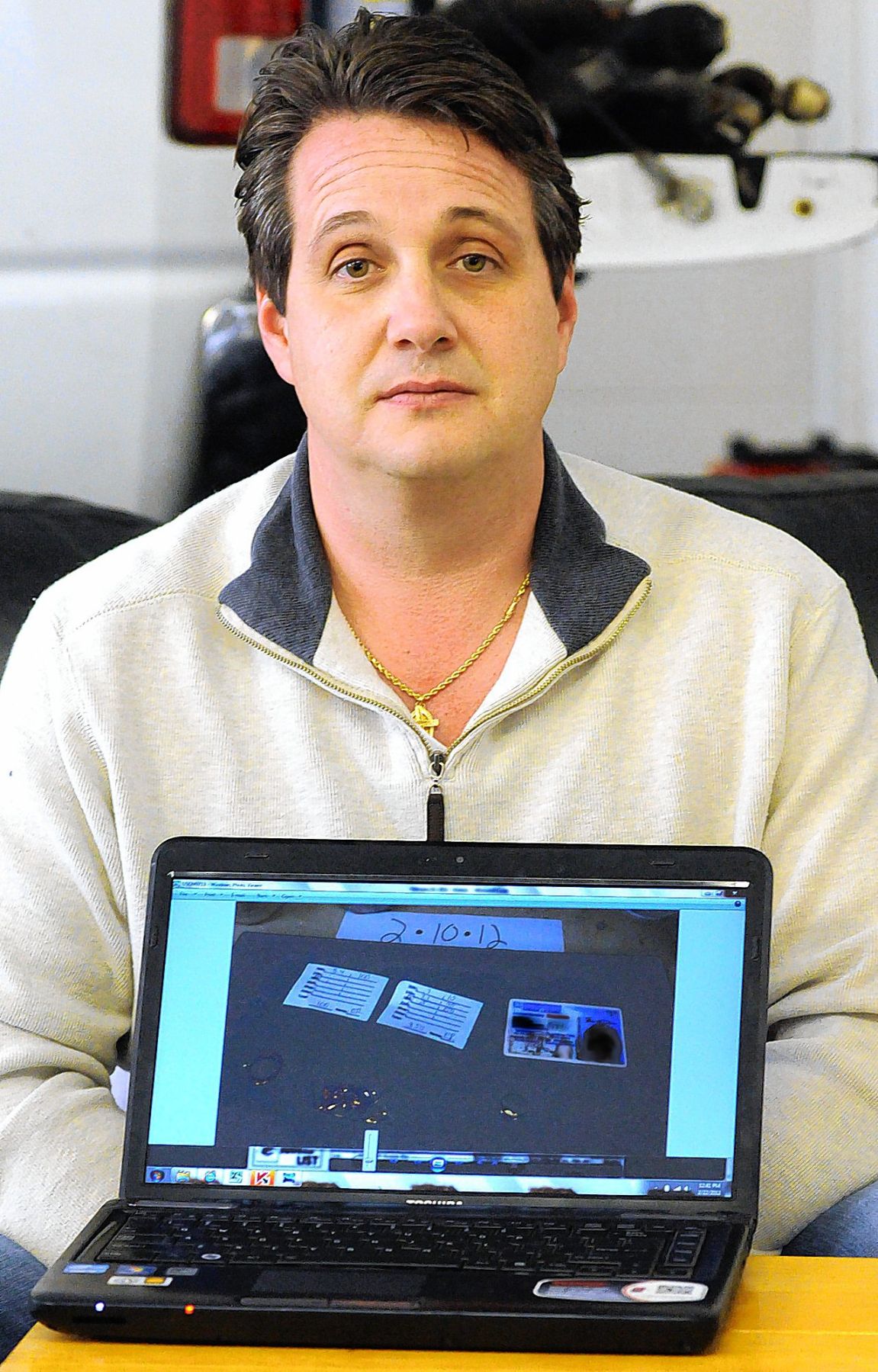 Michael Duke spread a variety of gold rings, school rings, necklaces and chains on the desktop. The yellow luster shined in the office light.

Workers at Missouri Gold Buyers & Jewelers, 870 S. Highway Drive in Fenton, had purchased the gold during a recent day's work. The total was valued at $3,600.

The owners had sold the jewelry for a variety of reasons. Some needed the money to pay bills while others wanted some extra cash in their wallets. A few dumped the jewelry they don't particularly like.

Whatever the motives, Duke wants to make sure the sales were made by the rightful owners, not thieves.

With gold at $1,700 an ounce, jewelry has become a prime target for thieves. Depending on its size, a 10-karat high school ring can bring from $250 to $300, Duke said. This is quick cash for a thief rummaging through a sock drawer or jewelry box.

As the owner of the Missouri Gold Buyers, Duke is pushing for St. Louis County to adopt a mandatory system of identifying jewelry that might be stolen.

"Buying stolen jewelry tarnishes the business," Duke said. "I built my reputation on being honest and fair with my customers. I don't want anyone to lose their jewelry at my business."

The process he proposes is simple and one that is in use at his stores. A digital photograph is taken of the jewelry; the seller's driver's license or state identification card; the amount of the purchase; and the time and the date.

St. Louis county and city police go to his stores twice a week, pick up the flash card from the camera and give the workers a blank one. The police then use the information to find out if the jewelry has been stolen.

Meanwhile, the gold buyer hangs on to the jewelry for 48 hours. If it clears, it goes to the smelter, which gives the buyer a percentage of the profit. If it's stolen, the police take the jewelry for evidence.

Duke uses it on a voluntary basis at all five of his locations. Fenton is the only St. Louis County municipality that makes it mandatory. St. Louis City has been using the system for about two years.

The seller does not have to wait 48 hours for payment, Duke said.

"You just can't presume that people are criminals," he said. "I always say 99.9 percent of our customers are honest."

The downside for gold merchants is the loss of money if the jewelry is stolen and taken by the police.

Duke is willing to take the loss.

"I run a successful business and can afford it," he said.

Vincent's Jewelers in Creve Coeur also will take the loss. However, this is the one obstacle that could keep other gold dealers from supporting a mandatory identification law, General Manager Leo Anglo said.

"If the police take the gold, there needs to be some kind of compensation," Anglo said.

He had no immediate idea how such a system would work, but believes a buyer who uses the identification system in good faith should not be out the money.

Both St. Louis city and county police praise the system because it gives them at least a start on the investigation.

"The photograph and the identification give us a lead," St. Louis City Detective Sgt. Lance Isbell said. "It doesn't necessarily mean that the person who brought in the jewelry stole it, but it's a start. Before, all we had was a description of the jewelry. Now, we have the photograph of it."

Identification of the gold sellers has helped solve about 100 St. Louis area cases during the past year, said St. Louis County Sgt. Andy Gambill, supervisor of the burglary unit. The unit shares information with the St. Louis police, municipalities in the county, Jefferson County and St. Charles County.

While the 48-hour waiting period is important, the key is keeping accurate records of the seller and the sale, Anglo said.

"Many times, people may not know if their jewelry has been stolen," Anglo said. "If it doesn't look like the house has been burglarized, they won't look for it. They may not know about it for months."

In his experience, half of the thefts involve family members or acquaintances who have been in the victim's house.

Vincent's Jewelers has voluntarily used an identification system that is similar to Missouri Gold Buyers. Written descriptions and photographs of the seller and license are kept.

Pawnshops operate differently because Missouri state law requires them to be on LeadsOnline, a nationwide data system that can be accessed by police departments throughout the country. The shops must register and download all items that are brought into their shop.

The seller's name, identification, address and a description of the items are put into the system, said Rob Lauer, owner of North County Pawn Center and the president of the Greater St. Louis Pawnbrokers Association.

"It doesn't make a difference if it's a camera or a watch," Lauer said. "It all goes in."

Using LeadsOnline is a viable choice for gold buyers, Duke said. The big difference is the system used by Fenton and St. Louis includes a photograph with the jewelry, driver's license and other information.

The digital images are a big help in identifying stolen jewelry. Using a laptop, Duke showed a photograph of a recent purchase. He zoomed in on the jewelry, magnifying patterns in the gold without any blurring. He brought up the driver's license for easier reading.

Most of Duke's customers are women. Sometimes, the thieves have a girlfriend or someone else sell it to a gold merchant. There's only one flaw in that approach.

"If they're caught, they just turn around and point their finger at the thief," he said.

Implementing the system is within easy reach of any gold buyer, Duke said. All it requires is a digital camera with a flash card.

Gold is not the only metal sought by criminals. For years, thieves have broken into houses, stealing copper pipe to sell to scrap dealers. Copper and gold thefts are similar because most of the burglaries are drug-related, Isbell said. They generally are made during the day when the owners aren't home. One difference is the number of copper thefts fluctuate according to the market prices, he said.

"Gold prices stay high all of the time," Isbell said.

While there is an economic factor for the victims, jewelry theft also is an emotional issue.

"They lose an engagement ringer or a class ring," Isbell said. "That was something they might have thought was special."

He sent away stolen gold jewelry to be melted before holding it for the required 15 days.