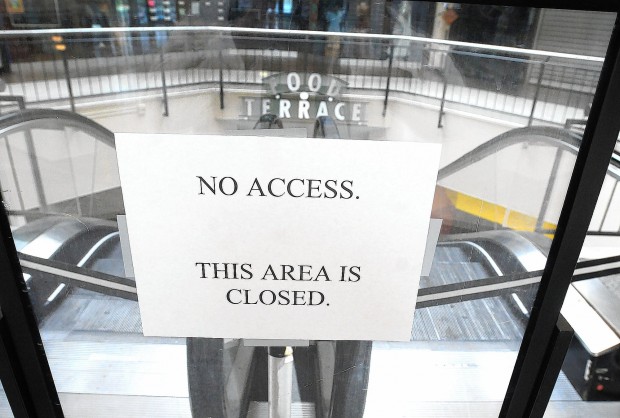 RICK GRAEFE / JOURNAL Part of Crestwood Court is off-limits to residents as stores have closed down. 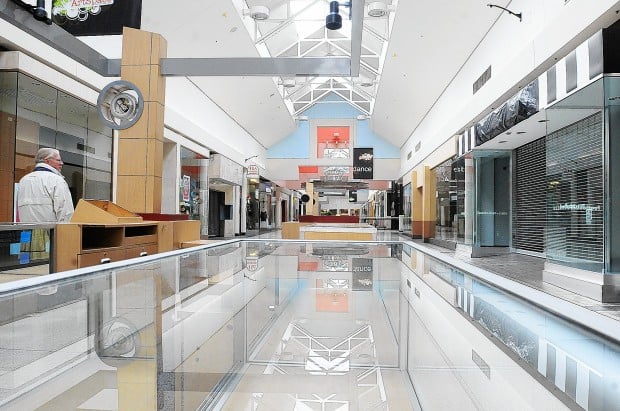 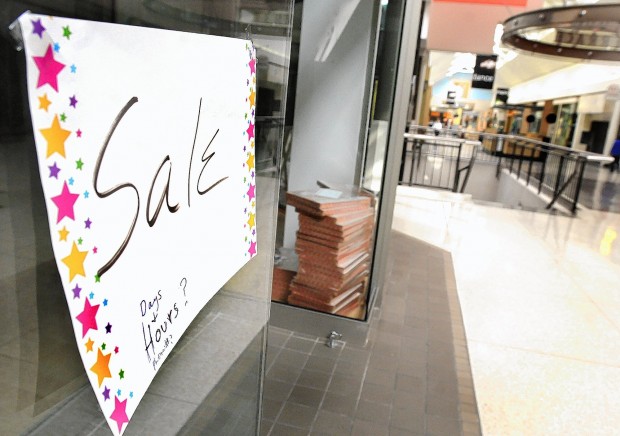 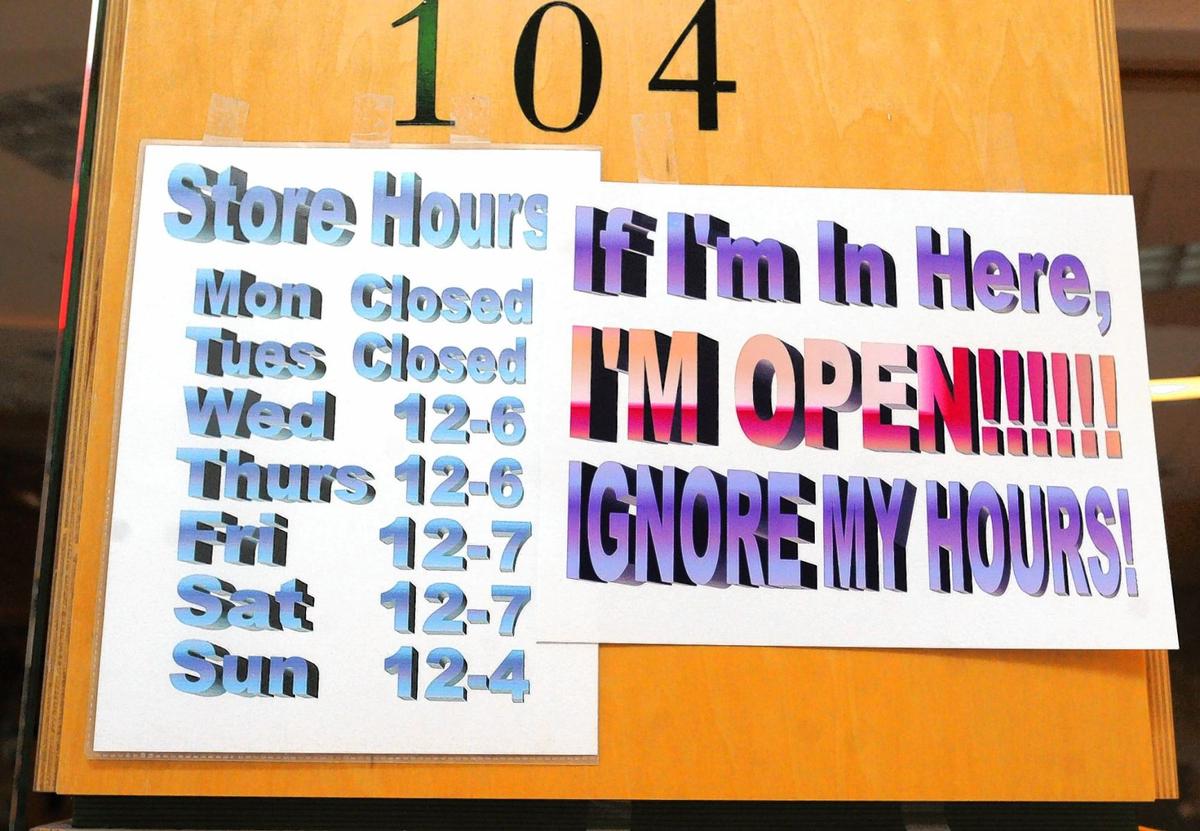 RICK GRAEFE / JOURNAL Many of the Crestwood Court stores do not keep regular hours and are open only by appointment. 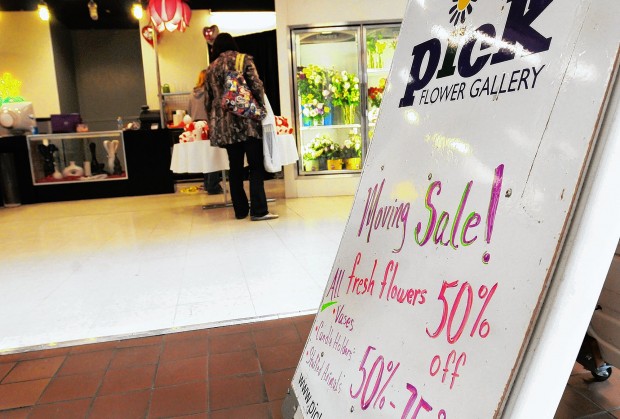 RICK GRAEFE / JOURNAL A lone shopper takes a look at a store's offering at Crestwood Court.

RICK GRAEFE / JOURNAL Parking spaces and elbow room at Crestwood Courts (formerly Crestwood Plaza) are plentiful as many of the stores have been notified they must vacate their premises by the end of February. 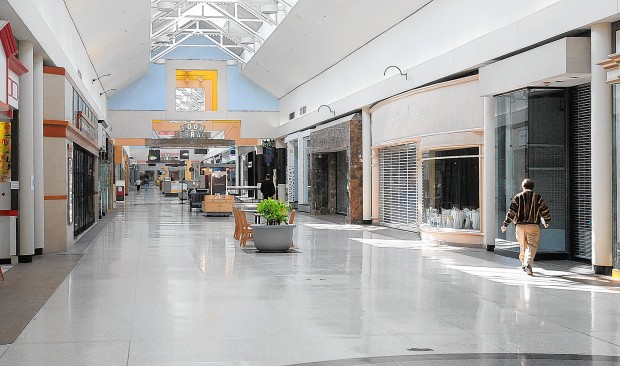 Jackie Stockhausen was standing at her kitchen sink, looking out the window of her house in the 1500 block of South Sappington Road.

She watched as earth-moving and construction equipment moved into a nearby field. It was 1956 and crews were getting ready to build Crestwood Plaza, one of the region's first shopping centers.

"We watched it go up from the very beginning," she said. "We did all of our shopping there."

The Crestwood mall once had more than 90 stores and four anchor stores. Now, it's just a shadow of itself, a relic from another era.

Now, 55 years later, the mall's floors and windows still shine and canned music plays over its speakers. It looks like it's ready to go. It's 30 minutes before opening time.

The mall has 15 retail shops that are open on a regular basis. Many people use the mall for exercise, walking past closed stores with metal grills drawn down over the fronts. The walkers don't even bother glancing into them. A maintenance worker or security officer makes the rounds. The quiet is almost a physical presence.

The 48-acre site, now called Crestwood Court, is getting ready for a redevelopment project, including an outdoor entertainment and retail complex. No date has been announced for the project's beginning.

Like many longtime indoor malls across the country, it is changing because of age, location, new ways of shopping, and increased competition from newer shopping centers and the Internet, said James Fisher, chairman of the Department of Marketing at the John Cook School of Business at Saint Louis University.

For years, Crestwood Shopping Center was the major retail point for the area. Retail stores had not built up along Watson Road. People would drive for an hour to shop, Crestwood Alderman Jerry Miguel said.

"Then, the suburbs began to spread out and more malls were built closer to where people lived," he said. "There was more competition."

Crestwood shopping center's decline came quickly. In 2002, it still provided Crestwood with $1.7 million in sales taxes. In 2006, it was $1.1 million. Then, the Dillard's store closed in 2007 and Macy's closed in 2009. The mall's 2011 sales taxes were about $300,000 with almost all of it coming from Sears. After the Sears closes in a couple of months, the city does not anticipate any significant sales taxes from the leftover stores, Miguel said.

Both Mayor Jeff Schlink and former mayor Roy Robinson Jr. said the Westfield Group, which owned the mall from 1998 to 2008, didn't invest in major updates.

"Both the Macy's and Sears buildings needed work," Schlink said. "The mall needed more vibrant colors. The parking lot needed work. It still looked like it was back in the 1980s."

The ways to shop also changed. A mall's anchor stores were traditional retailers like Sears or Macy's. They attracted shoppers, who then went on to spent extra dollars at the mall's smaller stores. Shopping patterns began to change with the big box stores that offered a large inventory at low prices. Walmart, Costco, Target, Kmart and others started to open more stores, making shopping more convenient and cheaper, Fisher said.

With more retail options, customers also looked for convenience in driving to the stores, Fisher said. This was another drawback to the Crestwood mall. Located at Sappington and Watson roads, the mall is not close to any highway exit.

Two longtime St. Louis malls that are doing well are located next to interstate highways, Fisher said. West County Mall is at Interstate 270 and Manchester Road, while the South County Center is near the intersection of interstates 255 and 55.

"They're just off the exits for shoppers," Fisher said.

Online shopping also became a significant alternative, especially for items like compact discs, books and clothes that don't need to be fitted, he said.

Centrum Properties, the owner of Crestwood Court since 2008, plans to convert the property into an open-air "lifestyle center." The retail and entertainment complex concept combines elements of both shopping and outdoor entertainment.

It is a throwback to the early days of shopping centers when they were not enclosed. Lifestyle centers have open-air pedestrian areas with restaurants, entertainment, fountains and seating while still offering retail stores. Many of them cater to the upscale shopper.

Malls have to "innovate or die," Fisher said.

"Hey, retail is heartbreak," he said. "Concepts get hot and that applies to shopping. A new mall opens with a new concept and draws business. It's Darwinian."

Stockhausen said she'd like to see the mall come back with restaurants that have outdoor tables and interesting stores.

"You've got to adapt," she said. "The only constant in life is change."

Crestwood Court redevelopment has a pulse

If all goes according to plan, Crestwood Court will be "District at Crestwood" by 2014.

RICK GRAEFE / JOURNAL Part of Crestwood Court is off-limits to residents as stores have closed down.

RICK GRAEFE / JOURNAL Many of the Crestwood Court stores do not keep regular hours and are open only by appointment.

RICK GRAEFE / JOURNAL A lone shopper takes a look at a store's offering at Crestwood Court.

RICK GRAEFE / JOURNAL Parking spaces and elbow room at Crestwood Courts (formerly Crestwood Plaza) are plentiful as many of the stores have been notified they must vacate their premises by the end of February.