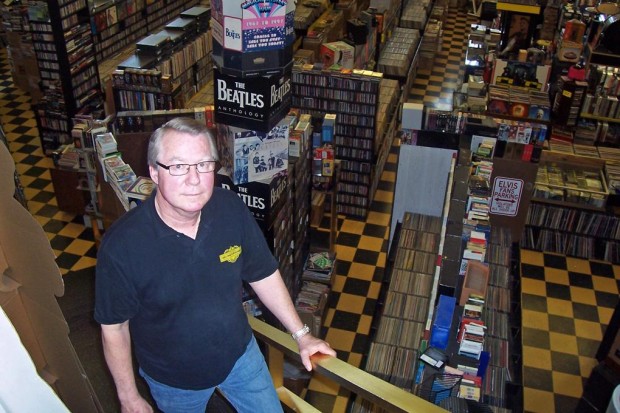 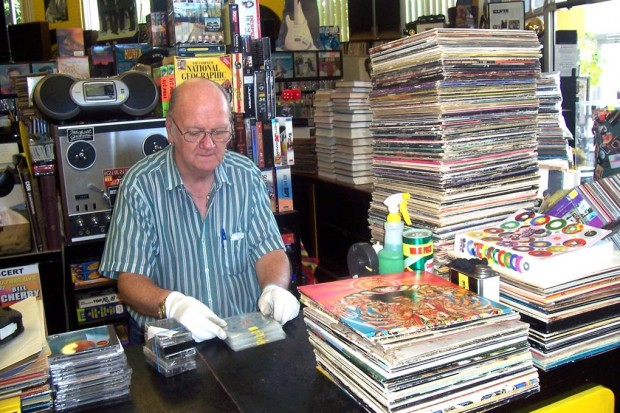 jim merkel journal Vernon Ballew sits behind the counter of the Record Exchange. 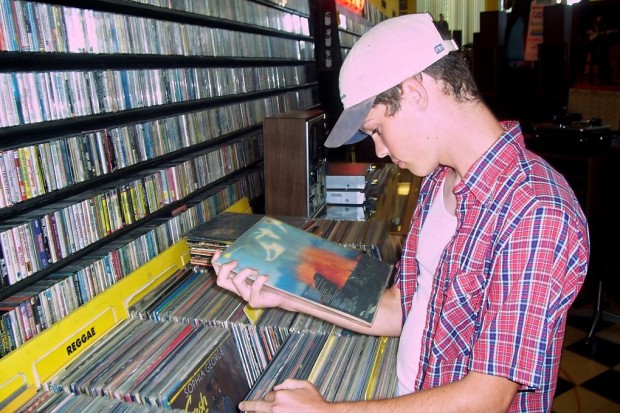 Jim merkel journal Ben O'Hallaron looks over a row of records at the Record Exchange.
By Jim Merkel

You won't hear Jean Haffner playing in the background of the 1963 hit "Sugar Shack," and for that local lovers of honest-to-goodness vinyl records are grateful.

The St. Louis Hills resident played drums with George Tomasco, who went on to found The Fireballs, the group that recorded that song. But he stopped when he decided he didn't have enough talent. But he translated his passion for rock 'n roll to selling records, CDs, cassettes tapes, eight tracks, 45s or any electronic device that will produce a series of notes.

Haffner owns the Record Exchange in the former Buder Branch of the St. Louis Public Library, 5320 Hampton Ave. Where there once were reference books and novels today are row after row of both old and fairly recent vinyl records that feature artists that range from Joan Baez to Roy Acuff and His Smoky Mountain Boys to the Cadillacs to Johnny Cash.

But Haffner is partial to vinyl.

A good vinyl record and a good stereo satisfy those with good ears, Haffner said. That's especially true today because vinyl records are made better, he said.

Vinyl records were devasted after the introduction of CDs, but in recent years demand has brought vinyl back to shelves.

In 2008, 2.9 million new vinyl LP records were sold in the U.S., a 124 percent increase from the 1.3 million sold in 2007, according to figures from the Recording Industry Association of America.

"Vinyl will last forever if it's taken care of properly," Haffner said. A 100-year-old record that's been taken care of still sounds good on the right equipment, he said.

"Everything in this store is a dinosaur, including me," Haffner said.

Except his customers. Ben O'Hallaron, 22, a horticulture student at St. Louis Community College at Meramec, was at the store last week trying to pick up a few ska records. Ska is a genre that originated in Jamaica and was the precursor to rocksteady and reggae.

The best tapes are at the Record Exchange, Swapshire said. "It's a great store," he said.

Rick Yielding, 57, a carpenter living in Overland, said he comes into the store about twice a year, mostly for country CDs.

"They have such a good selection here, just a lot of music you can't find anywhere else," Yielding said.

That selection's good for 69-year-old Vernon Ballew, a retiree living in Dutchtown. For the last several years, he's helped out in the store two days a week.

"You get to listen to all kinds of different music," said Ballew, who remembers when the first Elvis records came out on 78s.

It's all a feast for Haffner.

Haffner grew up in Texas, received a business degree, went to work for a big corporation and then decided he wanted to work for himself.

In high school, his father told him to obtain a college degree and then to go to work for the biggest company he could find.

"I finally asked myself who was I working for, myself or my dad?" he said.

So he decided to find a way to make money with what he really liked, music. "It's a hobby turned into a business. That's what I like," he said.

In the mid-1970s, he started a music collectibles store, Record Collectibles.

At one time, he had eight stores in St. Louis and one in Carbondale, Ill., along with two antique stores. He also took his wares to shows around the country.

Today, he's down to the Record Exchange and Haffner's Antique Store at 2100 Cherokee Street.

Because of his web site and Ebay, he doesn't have to go to shows any more. He likes that. Six years ago, he was coming back from a show and was rear-ended by an 18-wheeler.

Nonetheless, Haffner said his business still is growing. People from all over the country come to the Record Exchange, and he ships to Internet customers all over the world.

As he's consolidated his stores, he's put much of his music into warehouses. He figures he has thousands of eight tracks in warehouses alone.

"The lesser formats, sometimes you have to ask for, but they're probably here," he said.

Once somebody asked how many records he has.

"I know exactly how many I have," he told him.

jim merkel journal Vernon Ballew sits behind the counter of the Record Exchange.