TRACK AND FIELD: Hammer time for Ladue's Atkinson
0 comments
Share this
{{featured_button_text}}
1 of 2 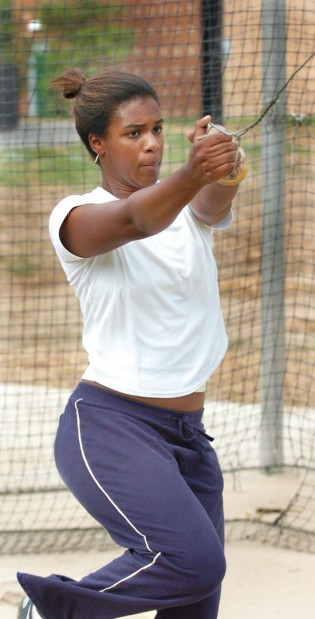 rick graefe / journal Erin Atkinson, a member of the Ladue Lightning, whips the hammer around during practice last week. Atkinson will attempt to bring home gold next week at the Junior Olympics. 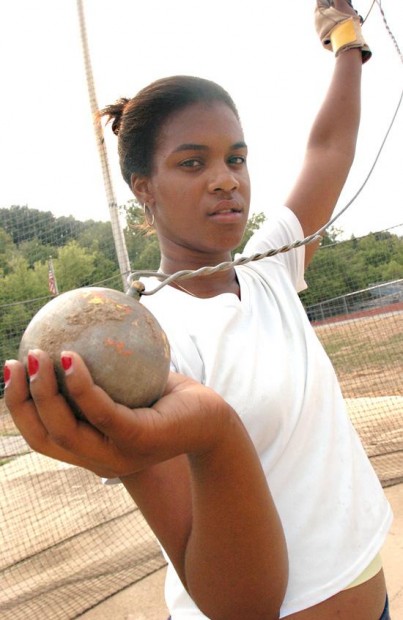 Rick Graefe / Journal Erin Atkinson, a soon-to-be senior at Ladue, will compete in the Junior Olympics Tuesday in Greensboro, N.C., in the hammer throw.
By David Kvidahl

Erin Atkinson grew up watching her older sisters run circles around the competition.

Atkinson, a soon-to-be senior at Ladue, will travel to Greensboro, N.C., next week to take part in the United States Track and Field National Junior Olympics.

She'll attempt to bring home the gold in the hammer throw.

You read that right - the hammer throw.

The hammer is, essentially, a shot put on a wire with a handle. At the young women's division, which Atkinson will compete in next week, the hammer weighs four kilograms (just under nine pounds).

The thrower holds the handle, spins around usually three to five times and then releases the implement (the track term for either a shot put, hammer or discus). Whoever throws it the furthest wins.

Though the hammer throw is not part of the events sanctioned by the Missouri State High School Activities Association, Atkinson has thrown the hammer for the last four years with her track club, the Ladue Lightning.

It's the third time the 5-foot-9, 17-year-old has been a part of the national meet. She won the event in just her second summer of competition in the youth girls division. Last year, she qualified for nationals, but wasn't able to defend her title.

She missed the meet.

The Midwest weather threw a curveball and her plane couldn't land in Kansas. The meet went on without her and Atkinson was stuck.

All Atkinson has done since that time is continue to put her time and effort into becoming a better thrower. She's been throwing since she was in eighth grade and it's only because of her sisters.

While watching her older twin sisters Lauren and Lynette, both recent Ladue graduates, run as freshmen at the Jackie Joyner Kersey meet in Illinois, their coach, Sean Burris, asked her if she'd ever considered throwing.

"She's tall, she has long limbs and that converts into applying energy into an implement for a longer period of time," Burris said. "It's like the difference between a rifle and a pistol."

"I started throwing that summer. I didn't know what I was doing. I just did it," Erin said.

While it wasn't love at first toss, Erin has recently started to fall harder for the sport. It depends on her practices. If she has a good practice, she's really into it. If practice doesn't go so hot, maybe she cools.

On the whole, however, she's found a sport and the hammer throw is her passion.

"That's her best event," Burris said. "She's the best hammer thrower in Missouri. Every time she throws, she gets better."

She hasn't had that many chances to actually get out there and throw the hammer. Because MSHSAA doesn't recognize the hammer throw as part of its competition, she can't focus on the event during the spring. That's reserved for the discus and shot put.

She spends her winter and summer focused on the hammer. She's ranked No. 18 in the nation and within the top 10 for underclassmen, even though her throwing coach, Paul Kennedy, can rattle off the meets she competed in over her career on both hands.

"She's competed in less than 10 meets her whole career," Kennedy said. "Where her competition would have a whole season."

Despite her lack of experience, Atkinson has been something of a natural at the sport. While her older twin sisters blister the track with their speed, Erin uses speed in her own way to succeed.

The best tool to whip a hammer the furthest isn't power or strength (though they can help), but speed.

"If you start out fast and increase your speed, it'll be a good throw," Kennedy said.

By throwing the hammer, it can help improve an athlete's ability in the discus. The events have similarities that athletes can use in both.

"The biomechanics of the hammer are similar to the discus," Kennedy said.

Atkinson hasn't found the same level of success with the shot or discus as she has with the hammer. A lot of that has to do with what's between her ears. She says she'll have good practices, but, come meet time, she can get so wrapped up inside her head, she'll overthink and turn in a less-than-stellar showing.

Her goal going forward is to master the mental part of a meet, so she can show everyone what those in the hammer throw already know.

rick graefe / journal Erin Atkinson, a member of the Ladue Lightning, whips the hammer around during practice last week. Atkinson will attempt to bring home gold next week at the Junior Olympics.